A truly impressive flotilla of vessels, including Royal Navy warship HMS Mersey, and over one hundred supporting yachts of all shapes and sizes, joined Sir Robin, and Suhaili in Falmouth Harbour to recreate the historic moment he returned home 50 years ago to scenes of national jubilation, and changed the future of ocean racing forever. 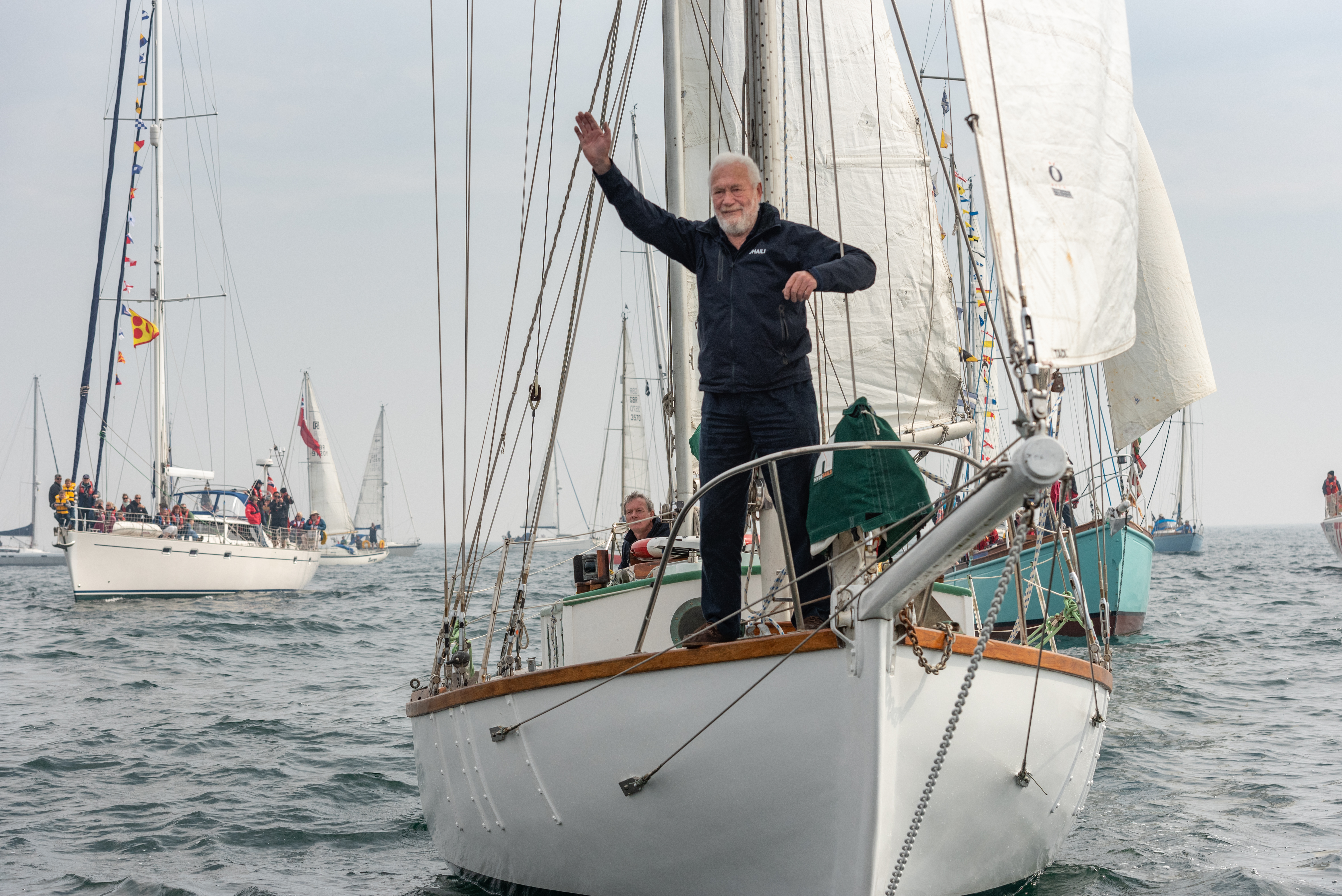 After he stepped back on shore at the Royal Cornwall Yacht Club in the precise location he took his first steps back on land after 312 days at sea in 1969, Sir Robin said: “Today has just felt like a fantastic display for my sport. I looked around out there and was so proud to see so many people out enjoying the day with me, celebrating something that happened 50 years ago. I feel truly honoured.”

He added: “My pleasure comes from watching others getting to enjoy my sport. Sailing on the oceans, is the way I enjoy it, and as long as I can, I will go on persuading others to try it because once you have, you will understand and be captivated by it like I was.”

As the clock struck 1525 - the precise time he crossed the finish line those fifty years previously - the warship and all the yachts sounded their horns in salute to the man who not only inspired the nation but also the world, and changed the face of ocean exploration for ever more. 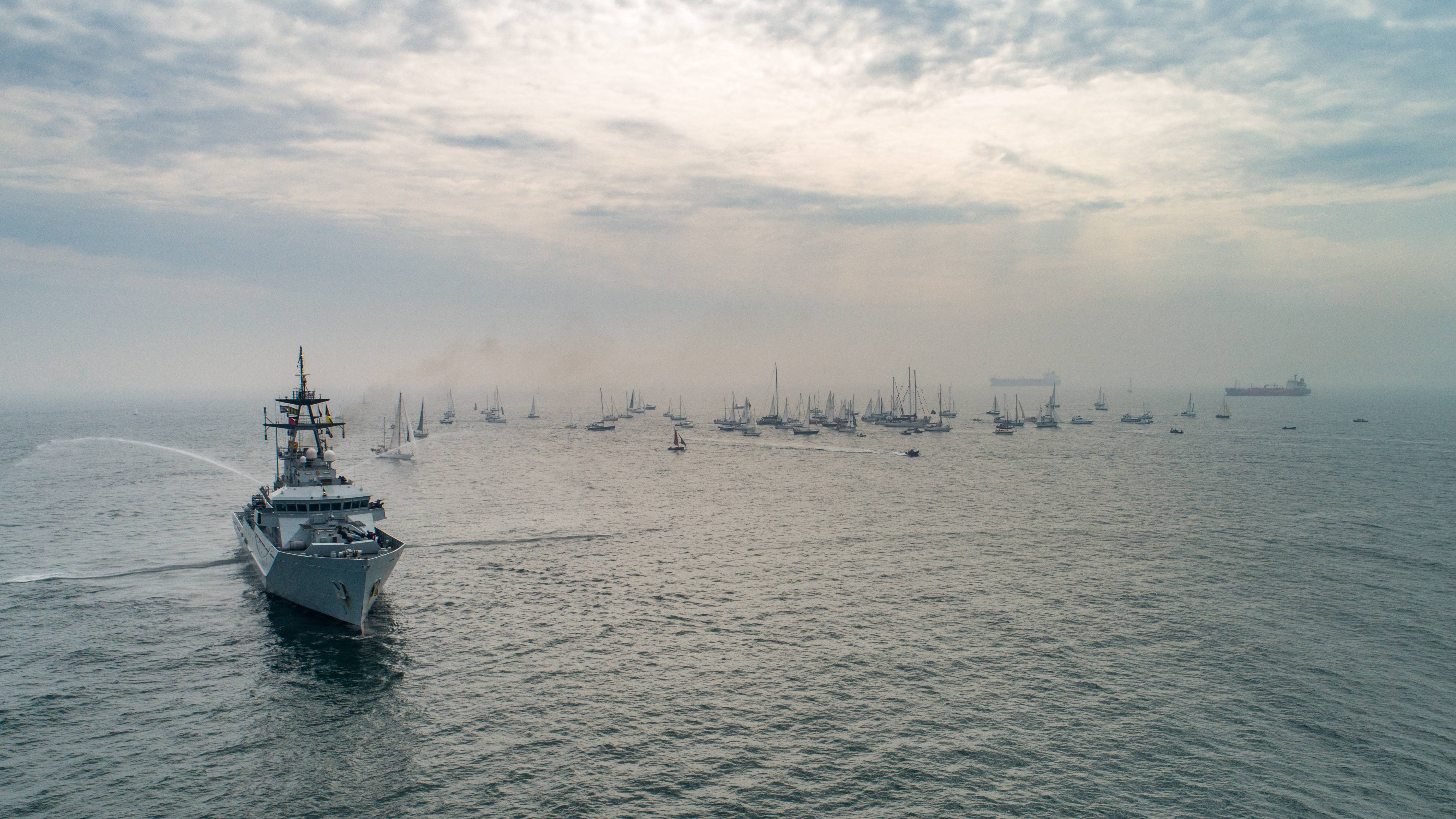 Among the many supporters turning out to help re-create Sir Robin’s moment were family members, friends, colleagues and sailing comrades from across the decades, as well as local well-wishers who were there to see him return in 1969.

Students of Sir Robin’s school, Old Berkhamsted, also sailed down to support their famous alumni member, as did past and present Clipper Race crew who have been inspired to follow his experiences on the ocean.

Old Berkhamsted has named its Sports Hall after Sir Robin and his original Golden Globe trophy sits proudly in the trophy cupboard and former student Mike Horton said: “I went to school in 1955, and he left in 1956. So I was in the first form Junior school, and he was actually in the sixth form, but I remember him from those days, and of course he has been a very well-known student ever since.

“I was one of the people who helped start the sailing club at Old Berkhamsted organisation. We had four boats of Old Berkhamstedians come down to join the flotilla today and we’ve all been very proud to support him. His experiences have touched so many lives, including all of ours, and we hope his legacy continues to inspire future students at the school.”

Commenting on the appearance of the Royal Navy today, Sir Robin, said: “My huge gratitude to the crew of HMS Mersey for taking the time to join us here today, I feel very grateful for their support.

“I love the Navy. I joined when I was 16 and I think it is one of the greatest careers open to a young person these days. More people should want to join. It’s a brilliant life and a brilliant service. I learned my trade as a Merchant Navy officer and that’s really what gave me the skills and the confidence to go out and sail around the world. Without the Navy, I would never have done what I did.” 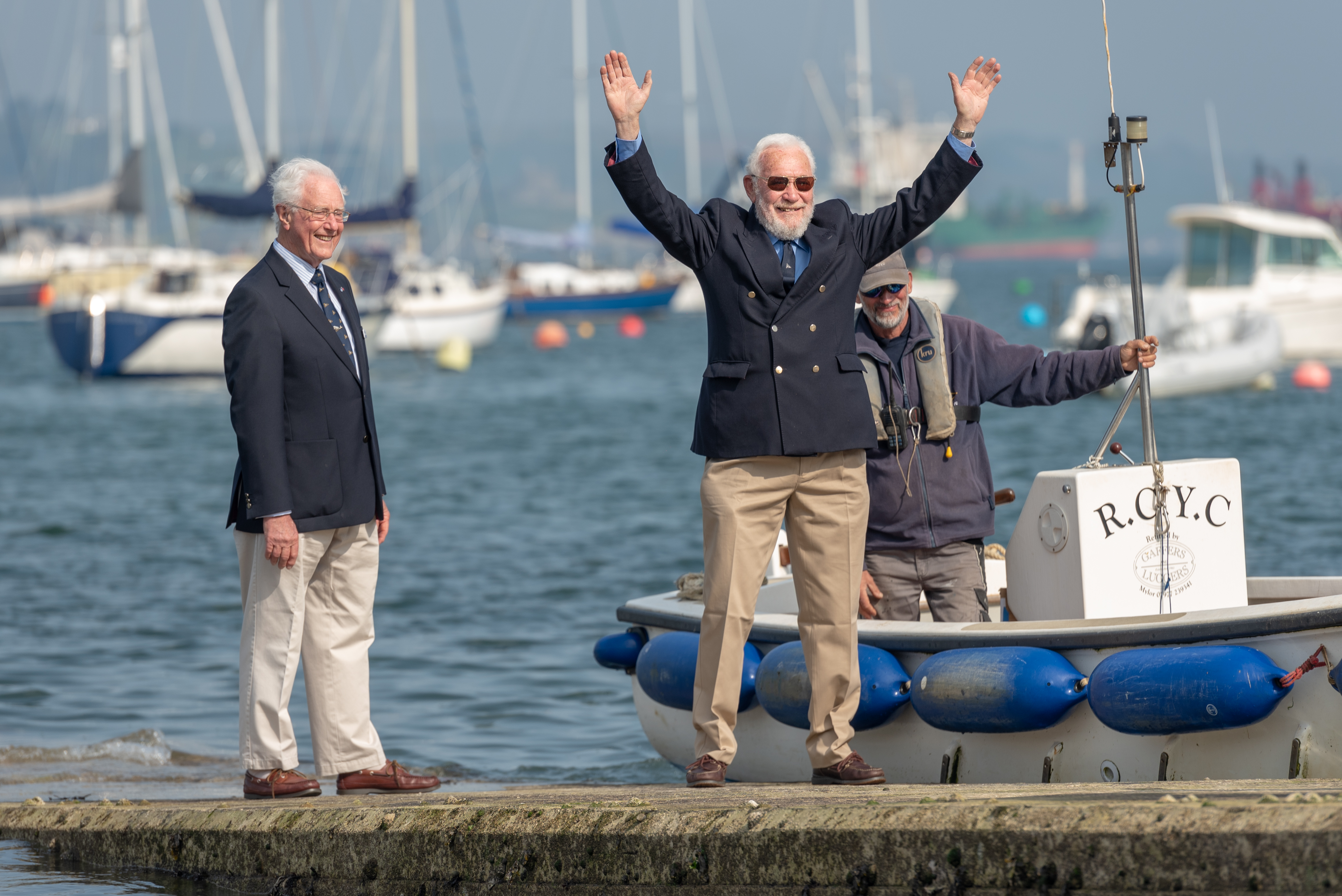 There was another boat that Sir Robin was keen to make part of the day, as he explains: “I invited Lively Lady to come and join us. She also went around the world around the same time as me, though made a couple of stops. I was lucky enough to know Alec Rose, her Skipper. He was a lovely man, and I was proud to have his boat with me. His team have done a phenomenal restoration job on her and she is part of our culture, our history. She is run by volunteers and they are doing an important job but they do need our support.”

Joining well-wishers were a strong representation of past and present Clipper Race crew. Sir Robin co-founded the Clipper Race following his round the world exploits. The only event on the planet which trains amateurs to become ocean racing sailors, over 5,000 people have now taken part in its eleven editions since 1995.

On that fact, Sir Robin says: “Watching people transform themselves on the Clipper Race is one of my proudest achievements aside from my 1968/69 circumnavigation. People all over the world have taken the opportunity to achieve something very special with their lives and that gives me enormous satisfaction.Whilst many people got to join Sir Robin and the celebrations in Falmouth, many more from around the world have been sending in their well-wishes from afar, detailing how their lives have been changed by Sir Robin’s achievements.

Phil Siddle said: “Thanks Sir Robin for your inspiration. I was given your book about this amazing feat as a teenager and absolutely loved it and now all these years later I will in turn circumnavigate in the Clipper 2019-20 Race, so special thanks from me.”

Jennifer Burgis said: “Happy Anniversary Sir Robin. Thank you for the Clipper Round the World Yacht Race, it certainly changed my life for the better. Not only did I have the best adventure on Garmin in the 2015-16 edition. I met the most amazing people who are now firm life friends, and I also met my husband! Congratulations and enjoy.”

Click here to see a gallery of images from the day.

Stay tuned on information regarding a special documentary. As well as recollections from Sir Robin and his family, it features interviews with friends who include Sir Ben Ainslie, Dee Caffari, Alex Thomson, Sir Chris Bonington, Sir Ranulph Fiennes, and the BBC’s John Simpson.