GREAT Britain crew member Dan Hardy was welcomed back into his mixed martial arts (MMA) ‘comfort zone’ with open arms in Brazil this week by Jose Aldo, the current UFC featherweight champion and number one ‘pound-for-pound’ UFC fighter in the world. 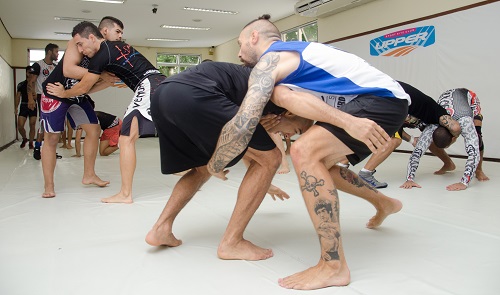 “I was very surprised to hear that Dan Hardy was in Rio,” said Aldo. “I first met Dan after I got my Championship belt and it was an honour then. It is the same honour to see him again here today and get to train with him for the first time.”

Aldo is currently in training for what is billed to be the biggest fight in Ultimate Fighting Championship (UFC) history, against Irishman Conor McGregor, this December. Asked his reaction to hearing that former UFC fighter turned commentator Hardy had actually raced here in a leg of the world’s longest and toughest ocean race, Aldo said: “When I heard that Dan sailed here as part of the Clipper Race it made me think he was a little crazy.

“I think the Clipper Race sounds really wild. To train against a physical opponent is easier than facing Mother Nature in some respects because you can’t ever know what’s going to happen with her. I think Dan is a very brave guy for even considering to take this on because he didn’t know how to sail before, let alone what conditions he would face on the race.

“Athletes are used to eating the right things and making sure we get lots of rest and sleep at the right times. Yet Dan was in a boat, in totally different conditions to what he is used to. However I think Dan is an amazing guy for taking this on. As an athlete myself, I appreciate competition and see what a big challenge this was for him.” 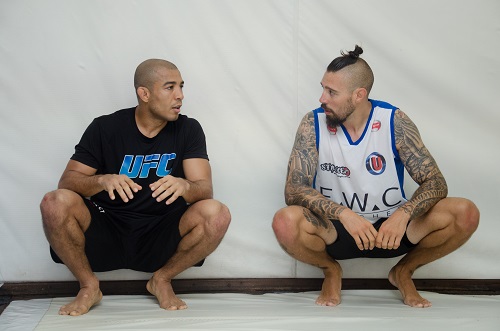 Hardy’s Clipper Race journey has taken him from the Octagon fight ring to the Atlantic Ocean, and back to the Octagon once again. The Clipper Race media team observed him back in his natural environment and between wrestling manoeuvres we talked to him about his experience on the first leg of the race from London to Rio de Janeiro:

Q: Brazil is one of the homes of MMA. How does it feel to be here after having sailed in to Rio?

A: “It’s taken over 5,000 miles to get here but to finally be in Brazil for the first time feels great. I’ve always wanted to come but to sail here into Rio past Sugarloaf Mountain was unreal. For me there is no better way to arrive. We felt like we had really earnt it.

“It is difficult to really get the perspective of travel when you are on a plane. You see the chart plotter on the map or in front of you in your seat back TV but you don’t really connect with the distance you are travelling. We sailed almost a month to get here through a lot of hard times so I really feel like now I’m here I can really enjoy the city a lot more, knowing what it took to get here.

“I’ve followed fighters from Brazil throughout my entire career and I’ve competed against some who have been very tough but I’ve never been able to come and see the place for myself until now. Jose Aldo is one of the top guys in the world in UFC. He is ranked number one in our sport so to be able to arrive in Brazil, step inside Jose Aldo’s gym and train with him today has been a real honour.”

Q: What is the comparison of the challenge between the Clipper Race and your UFC experience?

A: “They are entirely different although both physically demanding. I will fight anyone over 25 minutes rather than battling the Atlantic again. It was relentless. As soon as you get on the boat it continues until you get off on the other end.

“I’m used to getting up in the morning, going training for a couple of hours then sitting on my sofa and having a nice meal and sleeping in my bed at night. Yes a UFC fight is tough but its 15 or 20 minutes against another man, whereas in this you are battling against the elements for almost a month and it is just exhausting. You have to really have a strength of mind to put yourself through this.”

Q: What differences has your race experience made to you?

A: “The boat was a very alien environment to me. I was very much a beginner. Even though I did four weeks of training for it, I was still learning at all times on the race whereas when I step back into an MMA gym it feels very comforting. I do miss the boat though, surprisingly. Whilst it was a new experience I got a lot out of it.

“I feel very accomplished after completing the first race and I certainly feel physically in better shape as well. I’ve lost a bit of weight and I feel stronger so to come and get back on the mat with these guys and get thrown around a bit was really great and feels very familiar.

“I think it’s reinforced the confidence I have in myself. Martial arts has been something I’ve done my entire life and I guess it’s become a kind of comfort zone in a way, whereas sailing and crossing an ocean is something that I’ve always thought would be a huge challenge.

“I certainly feel like I have more flexibility as a person now and know I can put myself in new situations. I’ve been far more tolerant with different people than I thought I would be and it’s paid off. I feel like I’ve grown a lot and it’s also given me that motivation to go out and do things to be active, to go and challenge yourself and find new adventures in the world.

“There are a lot of lessons I will take from the race back into the gym with me. One of those lessons is mental toughness and knowing I can push through. When you are in the gym or in a fight, you always have the option of stopping it and walking out if it gets too tough but when you are on the Clipper Race that is not an option and sometimes you need to put yourself through that environment to remind yourself the importance of pushing through. That’s going to pay dividends for me when I get back to training.

“Also, you get off the boat with a different perspective. I’m going back to my house and my family and I have a whole new appreciation for them. I think everyone needs a perspective away from their lives sometimes. We can get so immersed in our everyday stuff and it often difficult to step away from that. Being completely removed from everything puts things completely in perspective and makes you realise what’s important."

Q: If you were writing your own school report style assessment on yourself, what would it say?

A: “It would say ‘Tries hard?’ I think. My goal from the very start was to be a good crew member. I’ve not mastered the boat, I don’t know every role very well but I’ve done everything I could do. I was always out on the bowsprit, I like the adrenaline positions so you know, up the mast, helming in bad weather and that kind of thing. I feel like I’ve challenged myself and moved around the boat and got a good idea of the whole thing. But ultimately I wanted to be a good crew member and get an experience of being part of a team, something which I had never done before.”

Q: How will it feel to say goodbye to your GREAT Britain team mates?

A: “It will be weird. It’s been on my mind for the last few days. Obviously I made a lot of good friends. We started off as a crew when we left London but we arrived in Rio as a family.

“It will be strange to see them leave at race start and watch the boat leave without being a part of it. I feel like I’m a part of that team now and more than anything I just want to be there and help them. I know they have some big seas coming up soon and they’re going to need some strong hands so I’d like to be there to give them a hand and help out. At the same time I know they are very capable crew and I think they will do great things in this race going forward. I’m going to be thinking about them every day as they continue on. 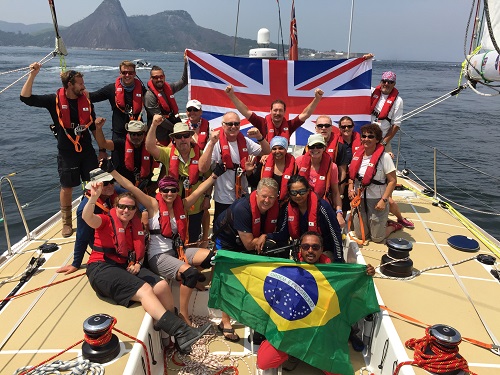 Jose Aldo was asked if he thought he could take on the challenge himself, he says: “I like a lot of sports, but I also like to sleep a lot so for me to live on a boat how Dan has explained, in cramped conditions without good sleep? I would try but I’m not sure how if I could do it to be honest!”

Watch a video of Dan's life on the Clipper Race here.

Dan Hardy is one of a range of different athletes with no previous sailing experience who have trained and will each compete in a leg of the Clipper 2015-16 Race with the GREAT Britain team.

The next athlete to climb aboard is London 2012 rower Bill Lucas who will join the team in Cape Town. To find out more about the athletes click here.