Race 6: The Wondrous Whitsundays Race may only be six hours into its journey but some divisive early navigational choices and tight racing means the leaderboard is already making for gripping viewing.

In the past hour, PSP Logistics, which is the current race leader based on distance to finish, and Garmin have both gybed towards Tasmania to stay closer to the Rhumb line, whilst the rest of the fleet heads further offshore into the Tasman Sea. 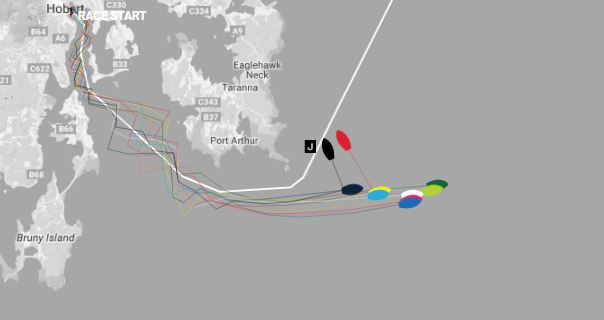 Ahead of the gybe PSP Logistics and Visit Seattle were under one nautical mile apart rounding Tasman Island with the lead changing hands behind them.

In her report this morning, Visit Seattle Skipper Nikki Henderson says: “A tactical race down the Derwent left positions changing constantly. We had a good start and then fell right to the back of the fleet which was frustrating to say the least. We have been fighting back and now have found PSP Logistics - the race is on!”

After leading for most of Race 5 until the crucial final stage, PSP Logistics Skipper Matt Mitchell is feeling determined for a strong finish in this race. He says: “Our start today was great and we managed to pull a few miles on the fleet during the tacking battle out of the Derwent so we are very pleased. The guys are relishing the chance to get back out racing again and we feel that we have a bit of a point to prove on this one, so watch this space!”

The decision to gybe has meant Garmin is now in third place. After making the decision to play its Joker Card, meaning its points for this race will be doubled, Skipper Gaetan and his crew are giving all they can for a strong finish in order to make best impact on their position in the overall Clipper 2017-18 Race Standings.

Sanya Serenity Coast is hot on the heels in fourth and Skipper Wendy Tuck will also be determined to keep her excellent performance streak up in this All-Australian Leg.

Under seven nautical miles currently separates the fleet in this early stage, meaning positions are changing regularly. At the time of reporting, Dare To Lead is in fifth place as the fleet rounds Tasman Island and prepares to head north for the upwind battle, with Liverpool 2018 in sixth, Qingdao seventh, Unicef in eighth and HotelPlanner.com in ninth place.

Reflecting on the Hobart stopover, and the start of the Wondrous Whitsundays Race, HotelPlanner.com Skipper Conall Morrison says: “What a Stopover, and what an honour to receive the Rani Award at the prize giving for the most meritorious performance in the Sydney-Hobart Race. It is not every day you win (your class in) the Sydney-Hobart race so you have to make the most of it!

Conall, who has been declared Sailor of the Month by Afloat.ie, and has been nominated the publication’s Sailor of the Year Award added: “It is nice to be going again however it’s a marathon not a sprint and we must be well prepared for the strong Northerly forecast for tonight and tomorrow morning.”

Further back in the fleet, Nasdaq is in tenth and GREAT Britain in eleventh although leaderboard positions are all to play for as teams head north with positions likely to change regularly.

On board Nasdaq, Skipper Rob Graham reports that the team's fourth place during Race 5 has given them a psychological springboard for further successes.

Rob says: “The Nasdaq crew were delighted to have crossed the line in third place in the Clipper Race fleet during the Sydney Hobart. However, the two-hour redress awarded to HotelPlanner.com for their pickup of the MOB made them the victors on corrected time, and moved Nasdaq down to fourth.

“This is in no way a negative thing: HotelPlanner.com deserved its time, and the much more important achievement of helping a fellow sailor in need. It's been great to see the recognition of their competence and seamanship (as all Clipper Race crews are trained) by RSHYR organisers and beyond in the sailing media - please tell everyone you know to vote Conall in the Sailor of year 2017.”

Rob adds: “For our part, Nasdaq is going to use its good showing in the RSHYR as a spur to greater things in the races to come.”

As teams gear up to head north after clearing Tasman Island, Clipper Race Meteorologist Simon Rowell explains that the northerly winds will intensify over the next 24-28 hours and should reach speeds between 30 and 40 knots. This is likely to lead to some significant position changes as the fleet beats upwind and spreads out in this highly tactical race.

The arrival window for the fleet into Abell Point Marina, Airlie Beach, is 13 - 15 January 2018, when the teams can look forward to the inaugural Whitsundays Clipper Race Carnival.

Keep up to date with the latest hourly position updates, which are changing all the time, via the Clipper Race Viewer and read Skipper blogs in full on the Team Pages.