It’s a busy time here at Clipper Race HQ. Just four weeks into training at our UK and Australian training centres since the winter break, and 18 courses have already been completed by international crew members as they prepare for their adventure of a lifetime.

This week, six Clipper Race yachts returned from different training levels so we caught up with crew members from the UK, Germany, Columbia and Canada to hear their stories: 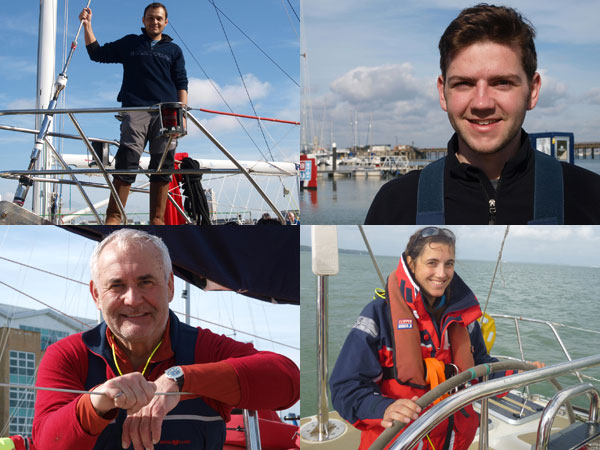 Jonathan is a self-confessed lover of the sea and enjoys water sports. On return from his Level 1 training he says: “It’s been an interesting week with a whole bunch of new experiences, I’ve never sailed before and I’m not used to the UK weather so I had no idea what I was getting myself into!

“I have wanted to learn how to sail for a couple of years now. I’ve never got to do it but I am always buying sailing magazines. I saw the Clipper Race and thought it was a perfect way to learn sailing and experience ocean racing,” he adds.

“We had great instructors, I enjoyed the teaching style they had and our team had a close bond,” says Henrik who is currently studying for his Batchelor in International Business at university in the Netherlands and will finish his sixth semester just before the start of his circumnavigation as a round the world crew member. Henrik can speak fluent German and English and conversational Dutch, French and Portuguese.

“I had some great moments, helming for the first time was awesome. Suddenly you have the power of such a big boat and you can really feel its power. Having all the sails up was a great experience for me but also being on the bow, hoisting the sail was a great experience and also climbing the mast to take down the mainsail. I was shaking to hold onto the mast, it was exhilarating,” he adds.

Returning from his Level 1 training, Eric, who turned 65 a month ago has operated his own Summer Resort for the last 30 years in Algonquin Provincial Park, says: “I joked that I have picked the three coldest legs of the race because I am Canadian and us Canadians don’t mind the cold! I was so pleased when it was announced that the fleet would be participating in the Rolex Sydney Hobart Race during Leg 4, what a bonus!”

Ruth has just finished her Level 2 training and says : “It was good to familiarise yourself with what you did on Level 1. We had two nights out at sea and a lot of us were sick but we got through the vomit tunnel, it’s been great.”

A leader of her local Brownie group, Ruth is incorporating her journey into their programme says the girls will keep her spirits high as she sails around the world.

“Being in a watch system was brilliant and understanding how that works, it’s amazing how you think you are not going to be able to sleep in the middle of the day for two hours then you get in your bunk and pass out. It’s a bit confusing though because it feels like one day lasts a week!

Ruth adds: “Even though we came into port most nights, the ladies on board had a no shower pact to get used to living conditions on board and we embraced what it will be like on the race! I am looking forward to getting on a Clipper 70 for my Level 3 and realising then that it is going to be my home for the next year. I’m looking forward to going up the mast of a Clipper 70 too, I’m all up for climbing and I can’t wait – bring it on!”

The 2015-16 race starts August 30 and is now more than 85 per cent full. To find out how you can join our intrepid group of adventurers, click here.

On Tuesday 17 March, former race crew member, Terezia Koczka is hoping to inspire people to follow in her footsteps…

As we edge ever closer to the start of the Clipper 2015-16 Race, we can now reveal the start dates and projected crew changeover days in the host ports, from the UK Race Start on 30 August, to the Leg 4 finish in The Whitsundays,…

Why has Australian-based crew member Suzanne Tomkinson been nicknamed the ‘Duracell Bunny’?In this week’s Future Crew Friday we catch up…

In this week’s Throwback Thursday, we look at the most memorable moments of February during the last edition of the…