After racing some 4,300 nautical miles from The Whitsundays, Australia, to the fleet’s new tropical home of Sanya, China, during the seventh of thirteen individual races that makes up the Clipper Race circuit, Host Port Sanya put on a spectacular Prize Giving ceremony in the gardens of its Marina Industries Association Platinum Level Five Gold Anchor Marina, the highest level of accreditation and the only one of its type in Asia. 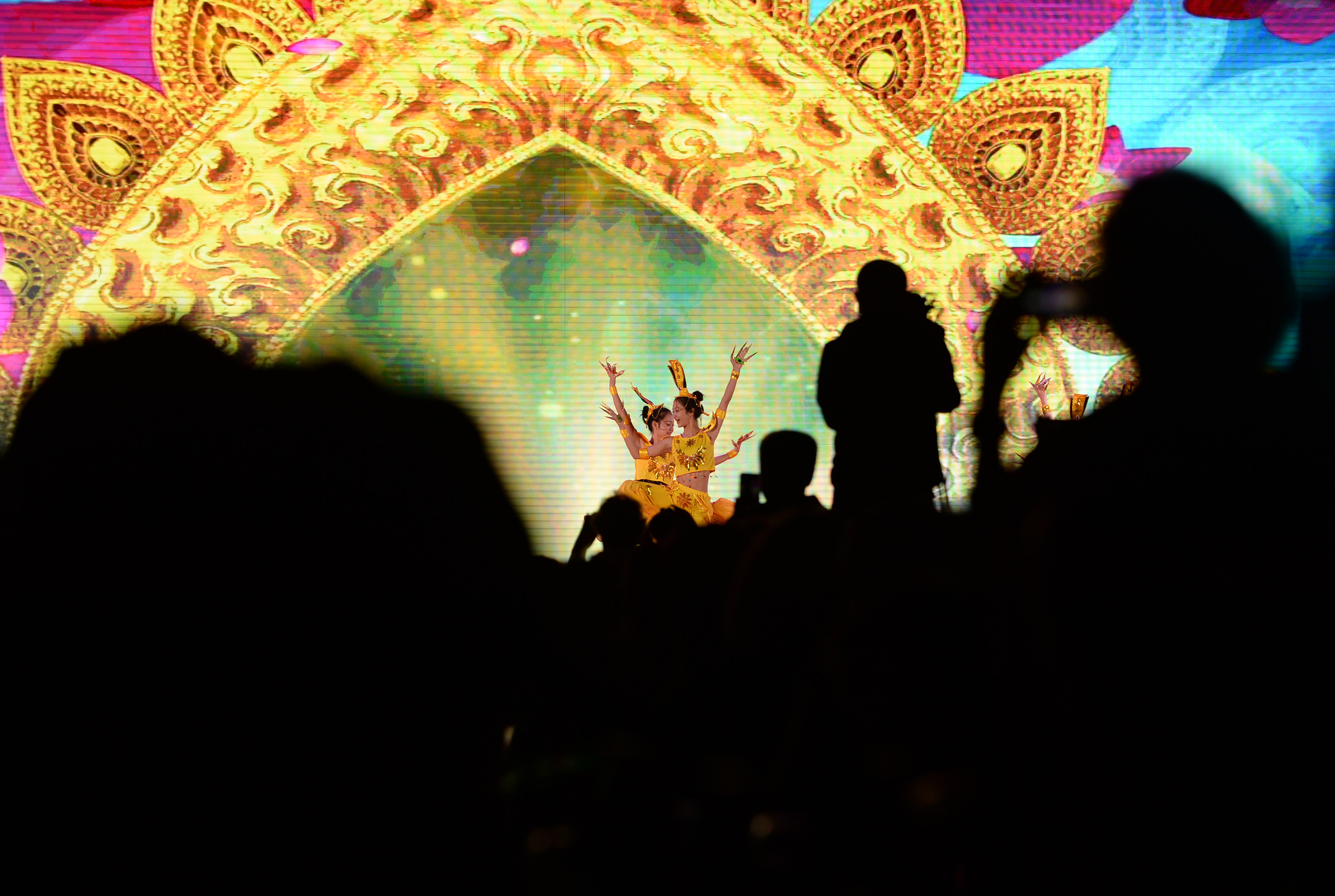 As the sun was setting on a beautiful day in Sanya, some 200 crew members were joined by supporters, members of the local media and government officials including Mr A. Dong, Deputy Secretary of the CPC Sanya Municipal Committee and Mayor of Sanya Municipal Government, to enjoy an impressive traditional performance on the purpose-built stage.

After sailing some 24,000 nautical miles since departing Liverpool, UK, on 20 August last year, Mr A. Dong congratulated all teams, saying: “The Clipper Round the World Yacht Race has been through a great many ocean adventure to arrive here in Sanya. I would like to express my sincere welcome to everyone.

“As one of the most famous and tropical coastal cities in China, the unique natural environment has blessed the city with excellent tourism resources. Sanya attracts many tourists here for its sunshine, climate, clear water and beautiful beach. It also provides the perfect conditions for sailing.

“The Clipper Race is one of the most challenging events in the world with an international influence. Such an event will provide Sanya with the perfect platform to be showcased to the world. I’m looking forward to great success from the Clipper 2017-18 Race stopover and I hope everyone can have a good time here in Sanya!” 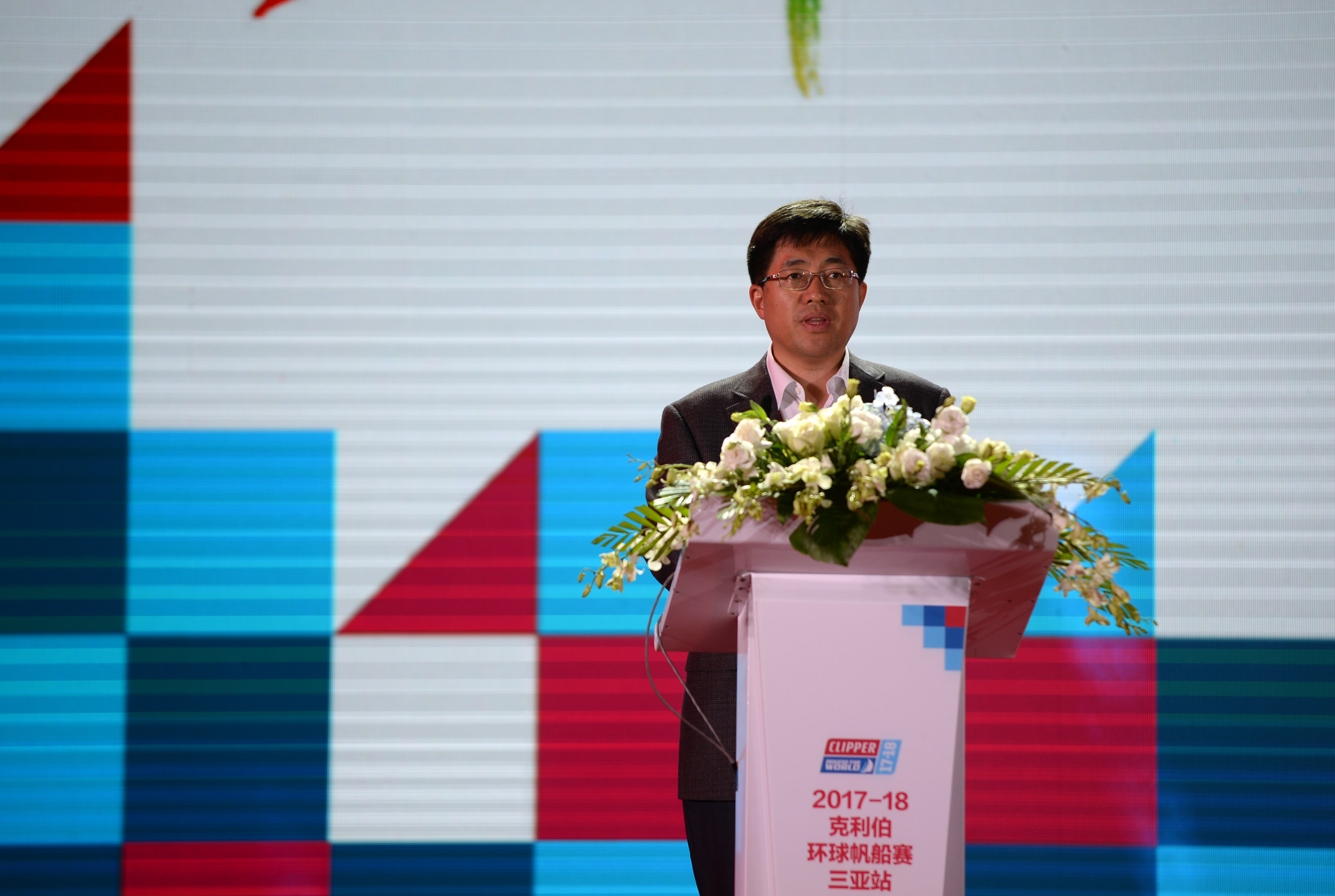 Clipper Race Founder and Chairman, Sir Robin Knox-Johnston, and CEO, William Ward OBE, then took to the stage to thank the organising committee in Sanya for such a warm welcome with Sir Robin commenting: “We are very happy to finally be here in the tropical resort of Sanya and we are very proud that Sanya Serenity Coast is part of this edition.”

He added: “With two Chinese yacht entries and two stopovers, both very different but a great representation to our international audiences of the different parts of Chinese culture. And as our ambassador programmes develop, we are seeing more Chinese sailors demonstrating that they too can achieve these remarkable feats.” 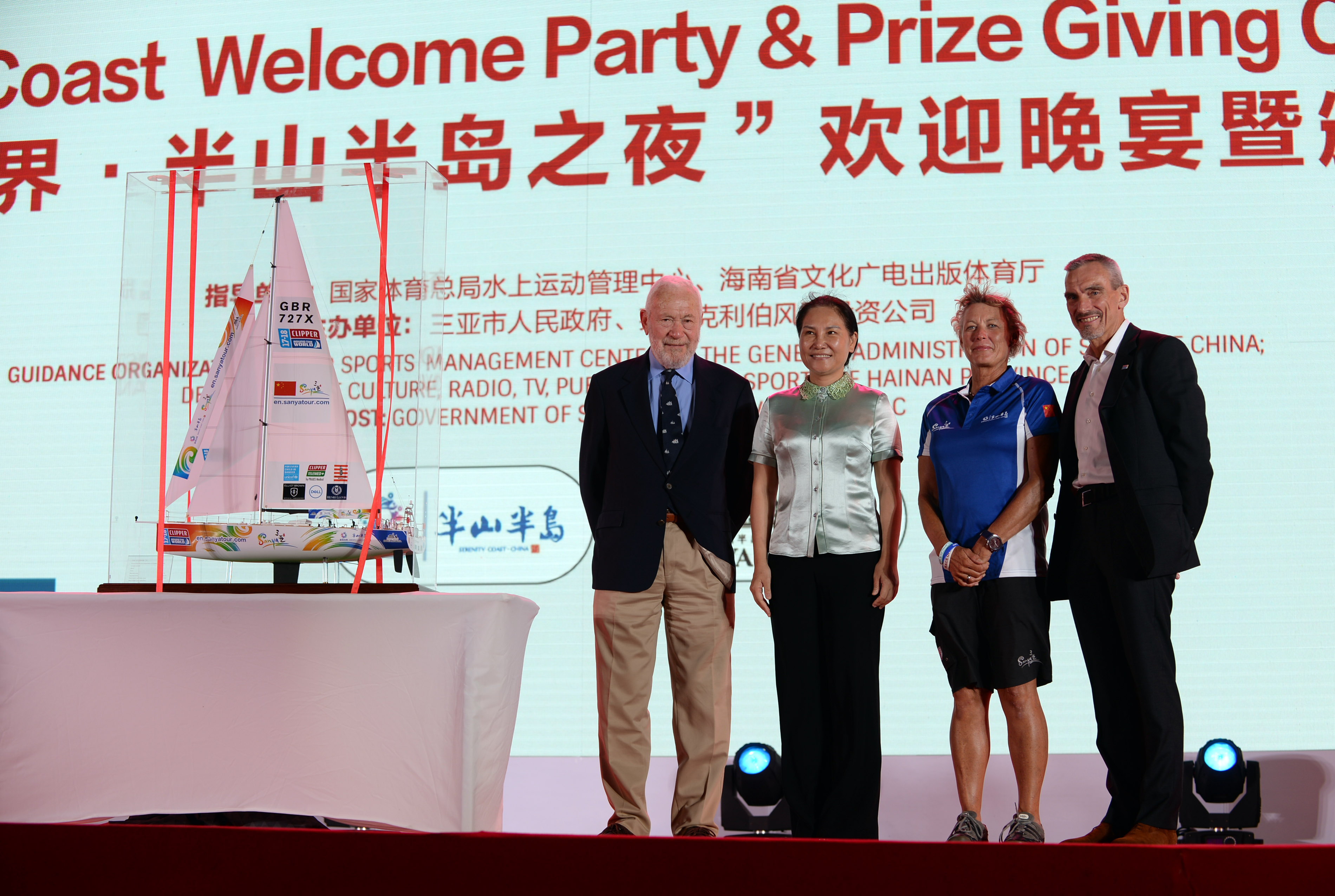 Following the presentation, Race Director, Mark Light, got the Prize Giving underway and started off with announcing the fundraising totals for Official Charity Partner Unicef. An incredible £241,935 has already been raised but there is still a long way to go towards the overall target of £400,000. The teams are competing to raise the most for the charity with Unicef currently leading the way followed by GREAT Britain and Liverpool 2018.

Crew members have continued to send back their best onboard images during Race 7 and the winner of the Race 7 Henri Lloyd Photo Competition was announced as Charlie Garratt, a round the world crew member on Dare To Lead for a stunning sunset image. 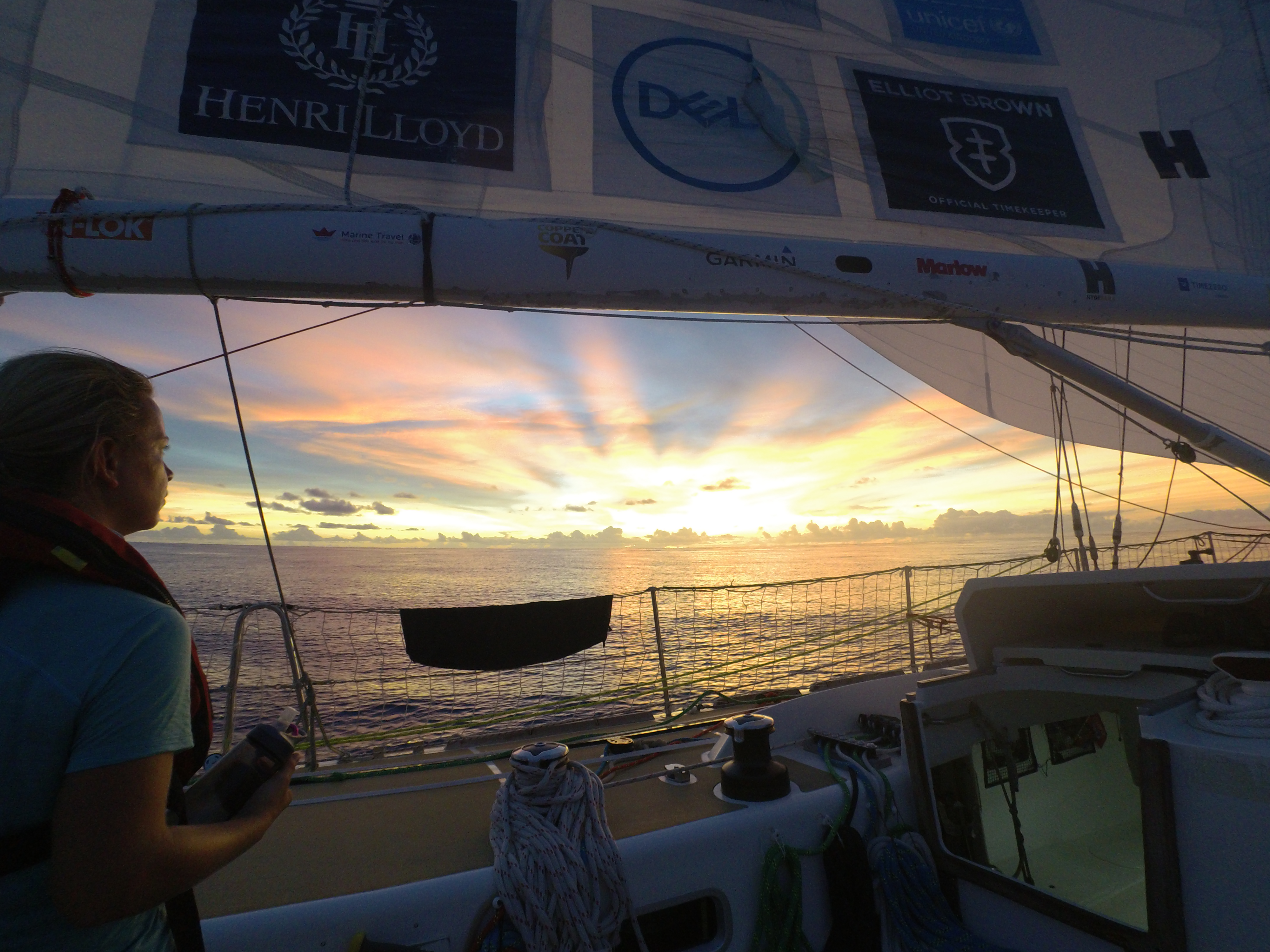 Next it was on to the race results and the first team to take to the stage was Nasdaq, which was the quickest team to complete the Elliot Brown Ocean Sprint and received the top prize of three bonus points and a celebratory pennant. The second and third fastest teams were GREAT Britain and Unicef, who picked up two points and one point respectively. 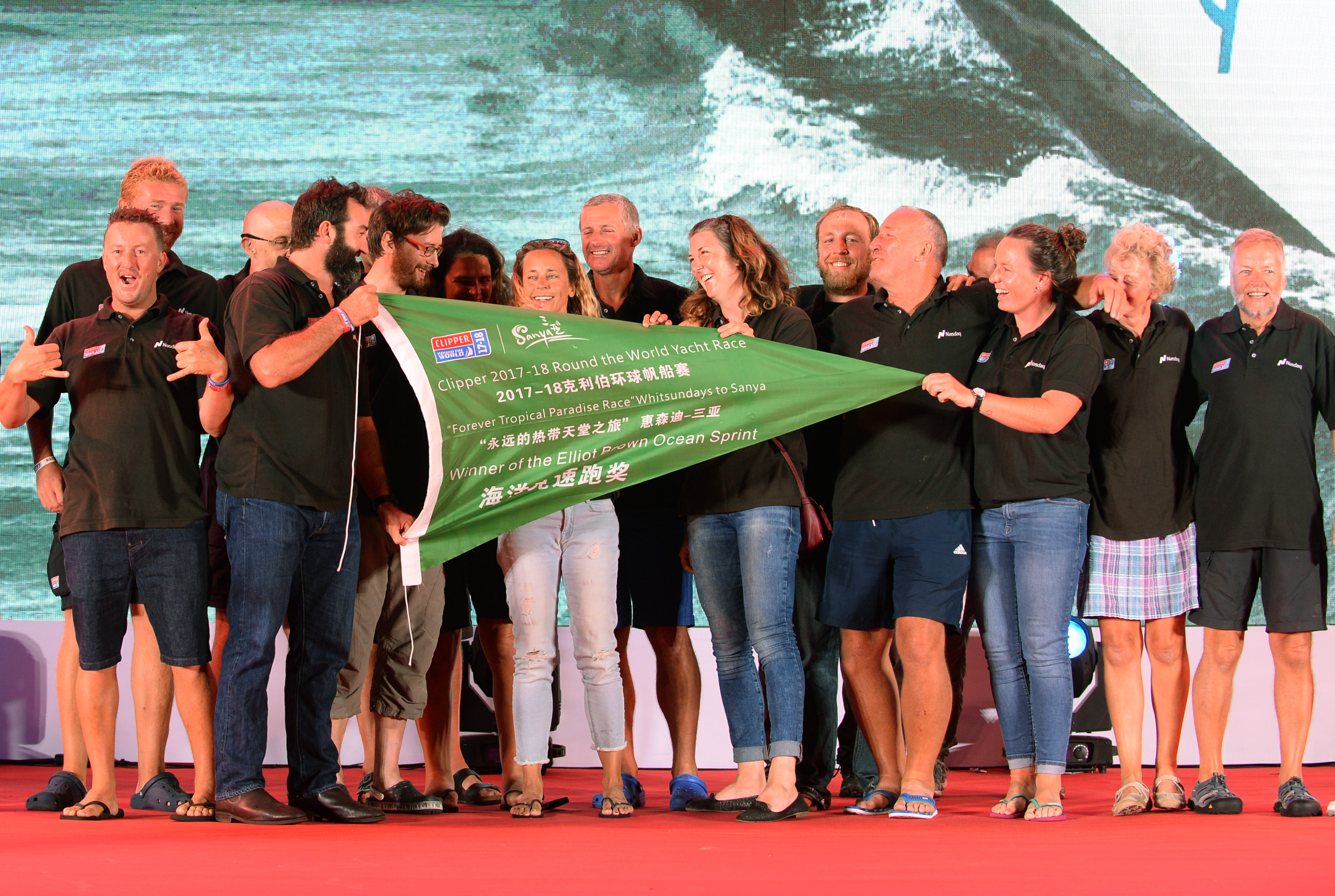 Visit Seattle, led by Clipper Race Skipper Nikki Henderson, then went on stage to receive a celebratory pennant for being the first team to reach the Scoring Gate, which also gave them three bonus points, ahead of Garmin (two points) and Nasdaq (one point). The Clipper Race has often been likened to a family, celebrating the social aspects of the challenge as well as the racing achievements, and it was revealed that the Stormhoek Social Spirit Award for Race 7: The Forever Tropical Paradise Race would go to the crew of GREAT Britain.

Mark Light read out a message from Stormhoek Wines’ Bernard Fontannaz, which said: “The aim of the Stormhoek Social Spirit Award is to remind crew that this race is about so much more than just winning. It’s about pulling people together and inspiring people to achieve more than they ever thought possible but it is also there to involve the Clipper Race supporters around the world and back home.

“The winning team this Leg has managed to achieve both. Not only are they an inspiring team but they accumulated three times more votes than their nearest competitors. Well done to Skipper David Hartshorn and the crew of GREAT Britain!” 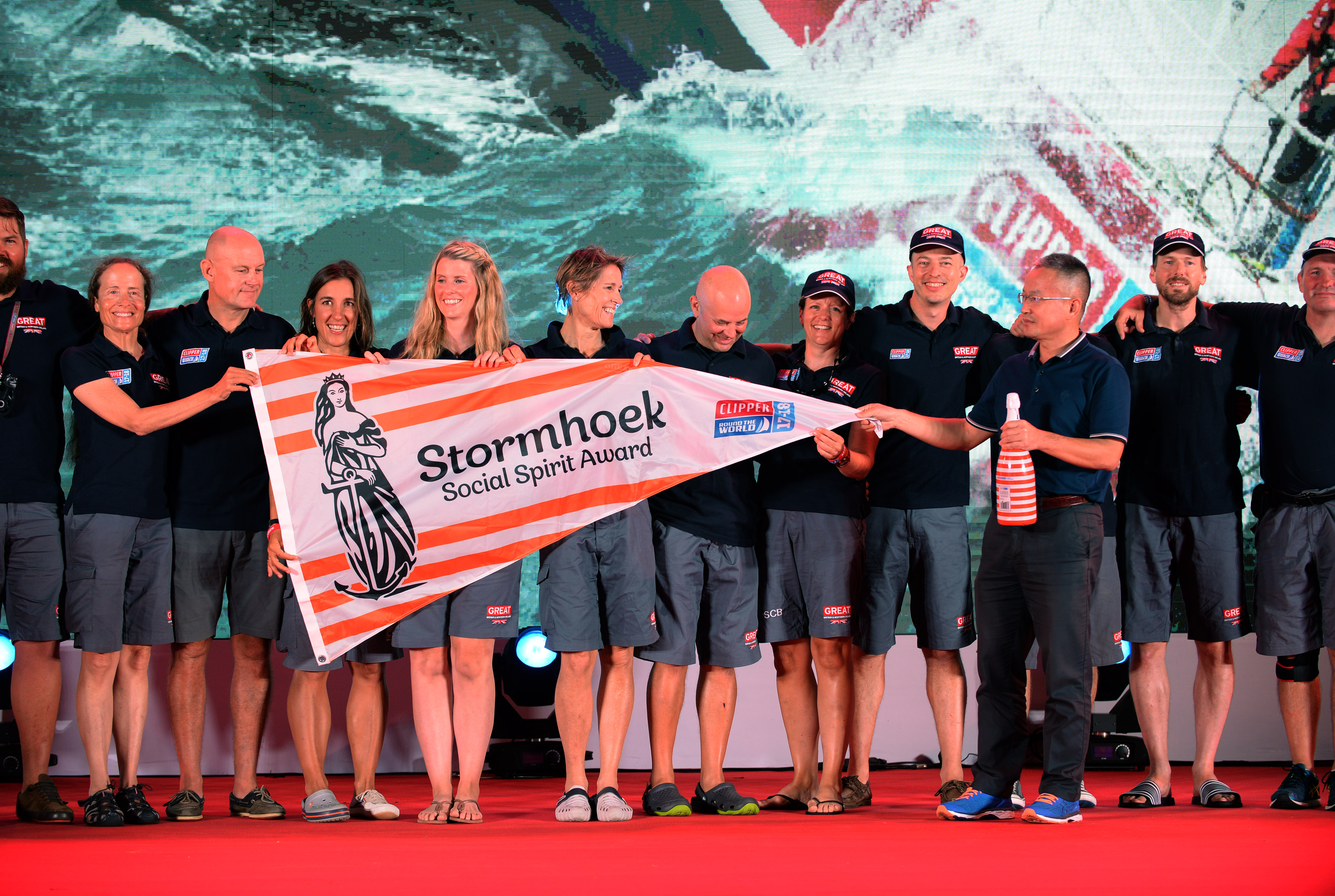 Next up was Dale Smyth, leading his Dare To Lead crew on stage to receive the second-place pennant. The team was particularly pleased with the podium position, which equals the crew’s best result yet. PSP Logistics then had its moment on stage in front of the large turnout to receive the first-place pennant. It was an exciting finish for the team’s maiden victory as it overtook Qingdao during the final days of racing and the other ten teams finishing within 21 hours of it. 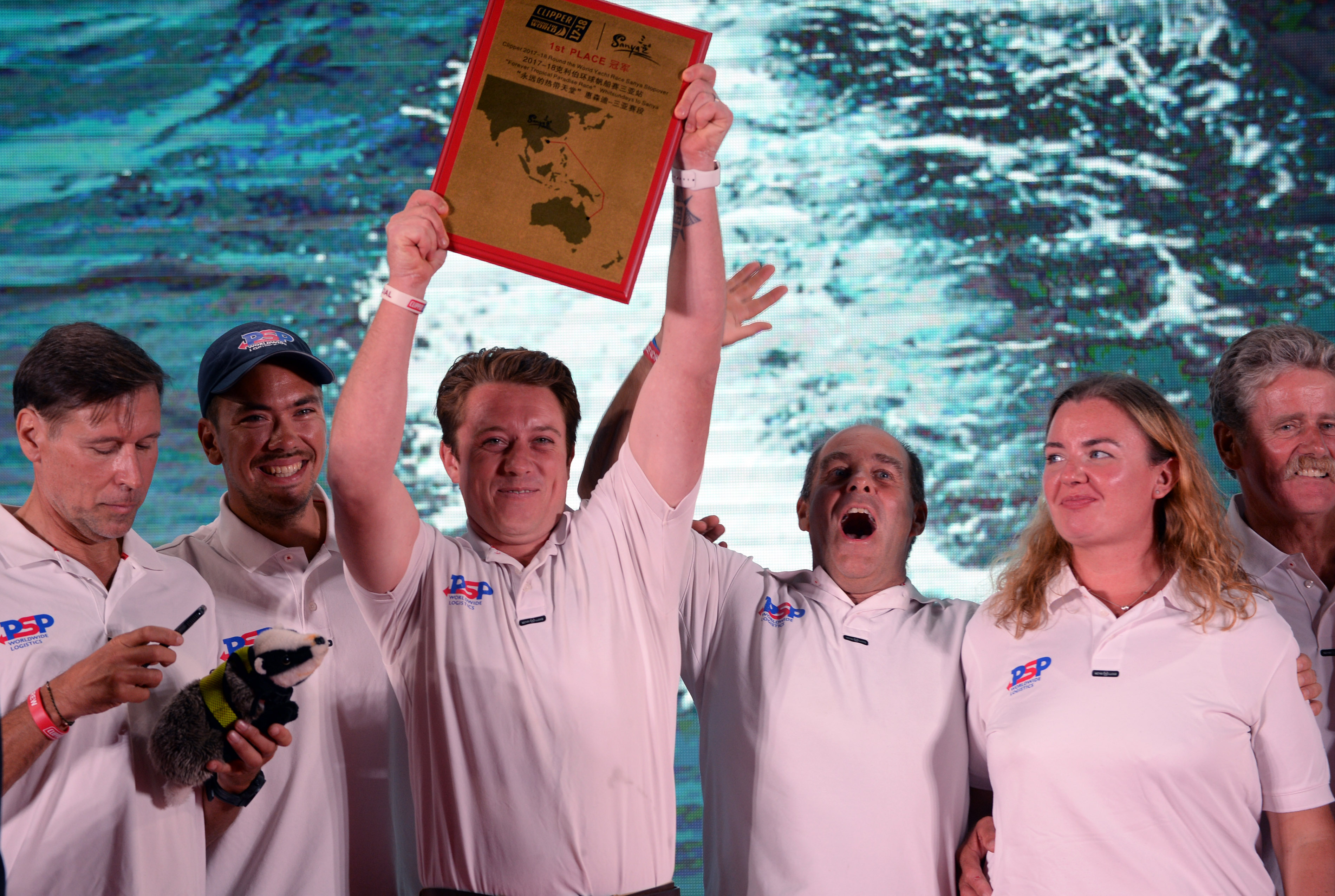 To round off the ceremony, Sanya Serenity Coast, which narrowly missed out on a podium finish into its home port, was brought back onto stage to receive a special award from the city following a highlights reel of its race so far as well as garlands for each of the crew members.

The team has ambassadors on board that represent Sanya including Manjiang Liu, a sailor from Sanya, who said: “It’s a great honour for me to represent Sanya in the Clipper Race. I’ve been telling the crew that Sanya is a very beautiful and tropical city and that there is no winter – you can go sailing all of the year round. Sanya is one of the places that you have to visit in China!” Sanya Serenity Coast will also feature in the next edition of the Clipper Race in 2019-20 and has started its recruitment process for its next ambassadors.

After the ceremony drew to a close, attendees were treated to a sumptuous dinner of local cuisine to enjoy under the stars as celebrations continued into the night. Re-watch the ceremony on Facebook Live and check out our Gallery for photos of the evening.

With the Sanya stopover now in full swing, crew from across the globe are spending their time discovering the best of Sanya through tour days to top sightseeing spots, enhancing culinary skills through Chinese cooking classes, and enjoying the first eleven boat Sanya Serenity Coast In-port Race.

For further information on the Sanya stopover, head to en.sanyatour.com.

The Sanya Serenity Coast team remains top of the overall race leaderboard now that the positions have been updated on the Race Viewer (although penalty points for Race 7 are yet to be taken into account):

The Clipper Race Village at the Sanya Serenity Marina is officially open, adding yet another level of excitement to what has already been an action-packed stopover.From early morning, visitors began streaming through the impressive archway at the village entrance and were greeted by a huge…

An incredibly close finish to the hottest Leg of the Clipper Race from the Whitsundays, Australia, to debut Host Port…