Today, 22 April, 2018, marks 49 years since Sir Robin Knox-Johnston returned to Falmouth, UK, after spending ten and a half months racing solo, non-stop around the world to win the Sunday Times Golden Globe Race.

Sir Robin, who went on to establish the Clipper Race to enable everyday adventurers to experience the thrill of ocean racing for themselves, reflects on that historic day in 1969, recalling:

“The night of the 21 April 1969 was not a restful one for me. I was heading in towards the Lizard, aiming to round it at daybreak on the 22 April, but my route was seriously busy with a couple of hundred French fishing boats square dancing across my path. Half of Brittany seemed to be at sea off the Cornish coast.

“The last couple of days had been busy with boats full of journalists appearing from all directions and demanding comments, a huge contrast to the solitude of the previous 310 days. At times I began to wonder whether I should not turn round and slip away and carry on being what I had become after ten and a half months alone: a creature of the sea with no need for other human company.

“The night was a long one. I did not dare sleep in case a fishing boat misread my paraffin pressure lamp, which was the only navigation light I had left working. Fortunately I had two faithful escorts: Fathomer with my friends aboard, and Queen of the Isles, the Scilly ferry charted by a newspaper. Both kept close to discourage the fishing fleet. 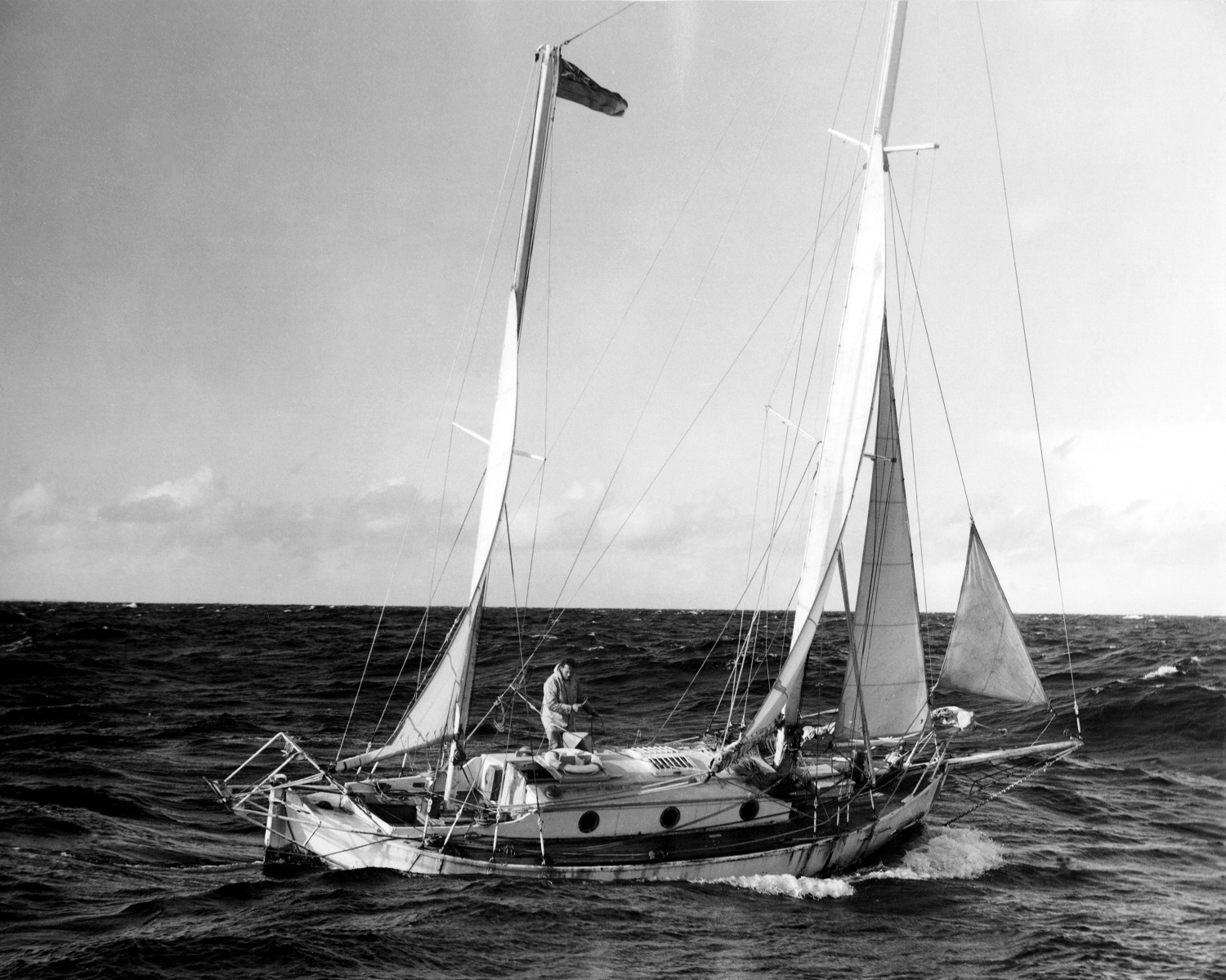 “At daybreak I was off the Lizard and was asked when I thought I would cross the finish line off Black Rock Beacon in Falmouth. The wind was fair and 0900 seemed a sensible ETA. But this created a problem I could not have imagined. A boat closed in and yelled would I slow up please as the Mayor and Mayoress were going to meet me and the Mayoress had a hairdressers’ appointment for 0900.

“I remonstrated. All I wanted was a cigarette (I had run out 40 days before – its will power really!) a pint of bitter, a steak, (I had lived off tinned food for the whole voyage and wanted something I could chew) and a bath, in that order.

“But after all this time away from fellow humans, and as I approached the end, I was losing my usual aggressive response to any threat and I slowed down.

“It was a disastrous mistake. At 0730 a front came through, no forecasts in those days, all I had was a barometer I had stolen from a pub.

“Suhaili does not beat to windward well (neither does her owner!) and the wind was now blowing directly from Falmouth Harbour. The Mayoress had all the time she wanted for her hair appointment, in fact too much, as I did not cross the finish line until 1525 in the afternoon of 22 April, by which time her hair do had been blown away.

“I was tired after two days without sleep but now exhilarated at the thought of getting home. I managed to avoid contact (except with the BBC launch) with the fleet of boats that had come out to escort me in and headed for the finish.

“But as I crossed the finish line at the entrance to Falmouth Harbour, which I had last passed on the 14 June 1968, a large Customs launch came alongside and two immaculate Customs Officers jumped aboard my poor battered little boat and gave the usual greeting. “Good afternoon Captain” they said, “Where from?”

“There was only one answer “Falmouth!” I responded. 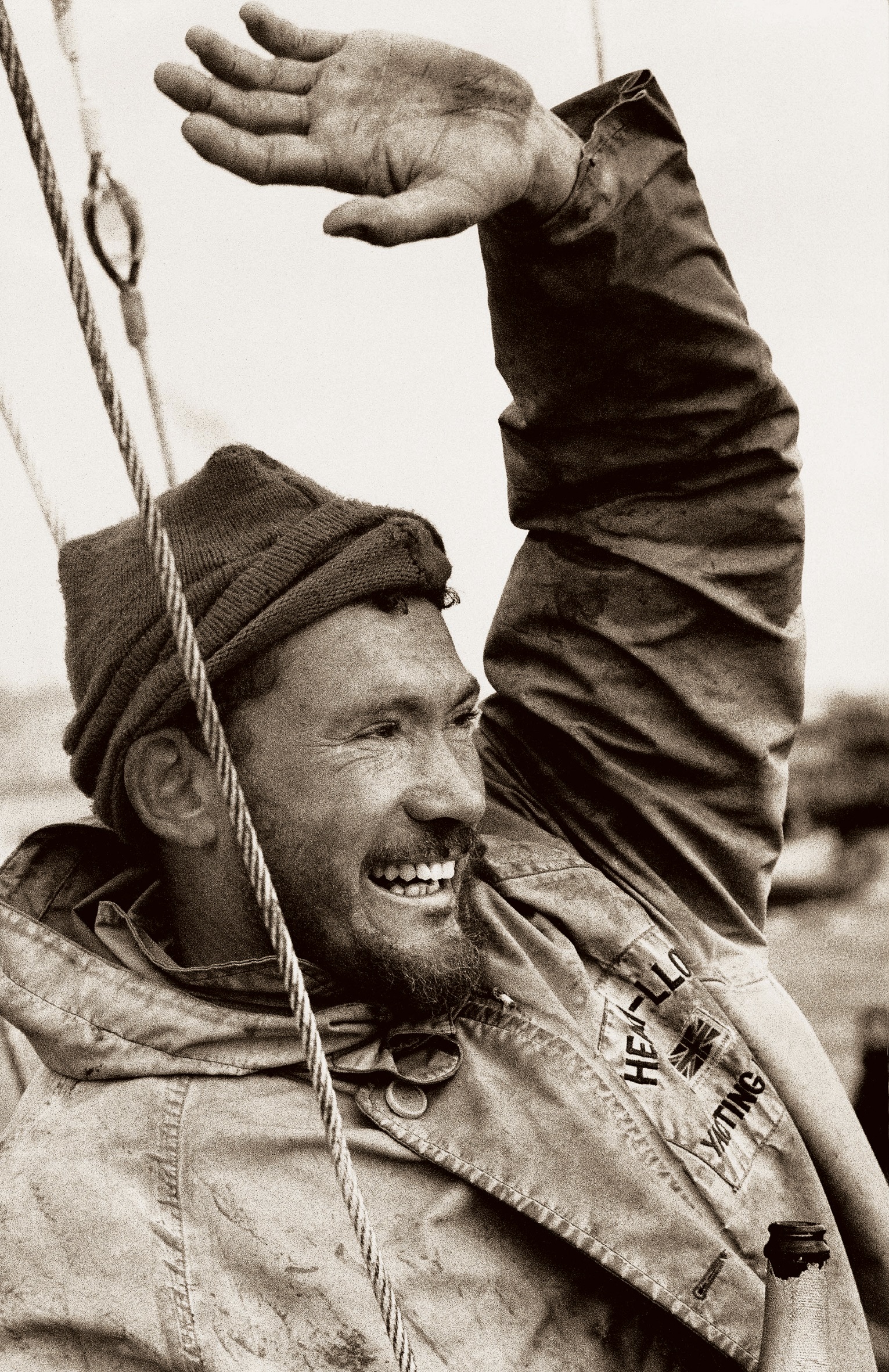 Nine sailors started the Golden Globe race; and amidst various retirements and boat breakages plus the well-documented loss at sea of Donald Crowhurst (Robin ended up donating his £5,000 prize money to a fund supporting Crowhurst's family) Sir Robin Knox was the only entrant to complete it.

The 30,000 mile voyage in his sturdy 32ft yacht Suhaili took 312 days, and Sir Robin returned to Falmouth on April 22 1969 as a modern hero, with his achievement remaining one of the most significant small boat sailing achievements in history.

14 June, 2018, marks the 50th anniversary of the day Sir Robin departed from Falmouth on his now historic voyage and to celebrate this achievement a special ‘Suhaili Falmouth 50 Parade of Sail’ is set to take place. The three-day commemorative event, organised by the Falmouth Town Team and the Royal Cornwall Yacht Club promises to be quite a spectacle.

Sir Robin will sail in to Falmouth aboard Suhaili on Monday 11th June, joined by two other historic solo circumnavigators, Sir Francis Chichester’s Gipsy Moth IV, and Sir Alec Rose’s Lively Lady, together with the entire fleet of yachts and skippers who are preparing to take part in a 50th anniversary race, established in tribute to Sir Robin’s historic voyage.

The 2018 Golden Globe Race is set to start on 1 July 2018 from Les Sables-d’Olonne, France. In contrast to the current professional world of elite ocean racing, this tribute race is designed to celebrate the ‘Golden Age’ of solo sailing. A solo, non-stop around the world race, via the five Great Capes. returning to Les Sables-d’Olonne, entrants will be limited to sailing similar yachts and equipment to what was available to Sir Robin.

The challenge is pure and very raw. Competitors will be navigating with sextant on paper charts, without electronic instruments or autopilots. They will hand-write their logs and determine the weather for themselves. Only occasionally will they talk to loved ones and the outside world when long-range high frequency and ham radios allow. It is now possible to race a monohull solo around the world in under 80 days, but sailors entered in this race will spend around 300 days at sea in little boats, challenging themselves and each other.

To find out more about the ‘Suhaili Falmouth 50 Parade of Sail’ go to https://www.falmouth.co.uk/falmouth-events/suhaili-falmouth/

To read further details on the Golden Globe Race 2018 go to http://goldengloberace.com/ggr/

As the front half of the Clipper Race fleet begins the motor through the Puget Sound to Seattle, the chasing pack are all fighting for the final positions in the marathon 5,600 nautical mile race across the North Pacific Ocean.Qingdao claimed its first…