LEGS: The Asia-Pacific Leg 5, the Mighty Pacific Leg 6 and the Atlantic Homecoming Leg 8

When Benoit, a very experienced offshore sailor originally from France and living Old Greenwich, Connecticut, signed up to complete the circumnavigation, he thought it was a once-in-a-lifetime opportunity that he would be embarking on alone.

However, when his son, Victor, turned up to meet him in Punta del Este, Uruguay, following the completion of Leg 1, the 26-year-old had caught the Clipper Race bug and before Benoit had slipped lines, Victor had already signed up to join him on Leg 5 and 6. 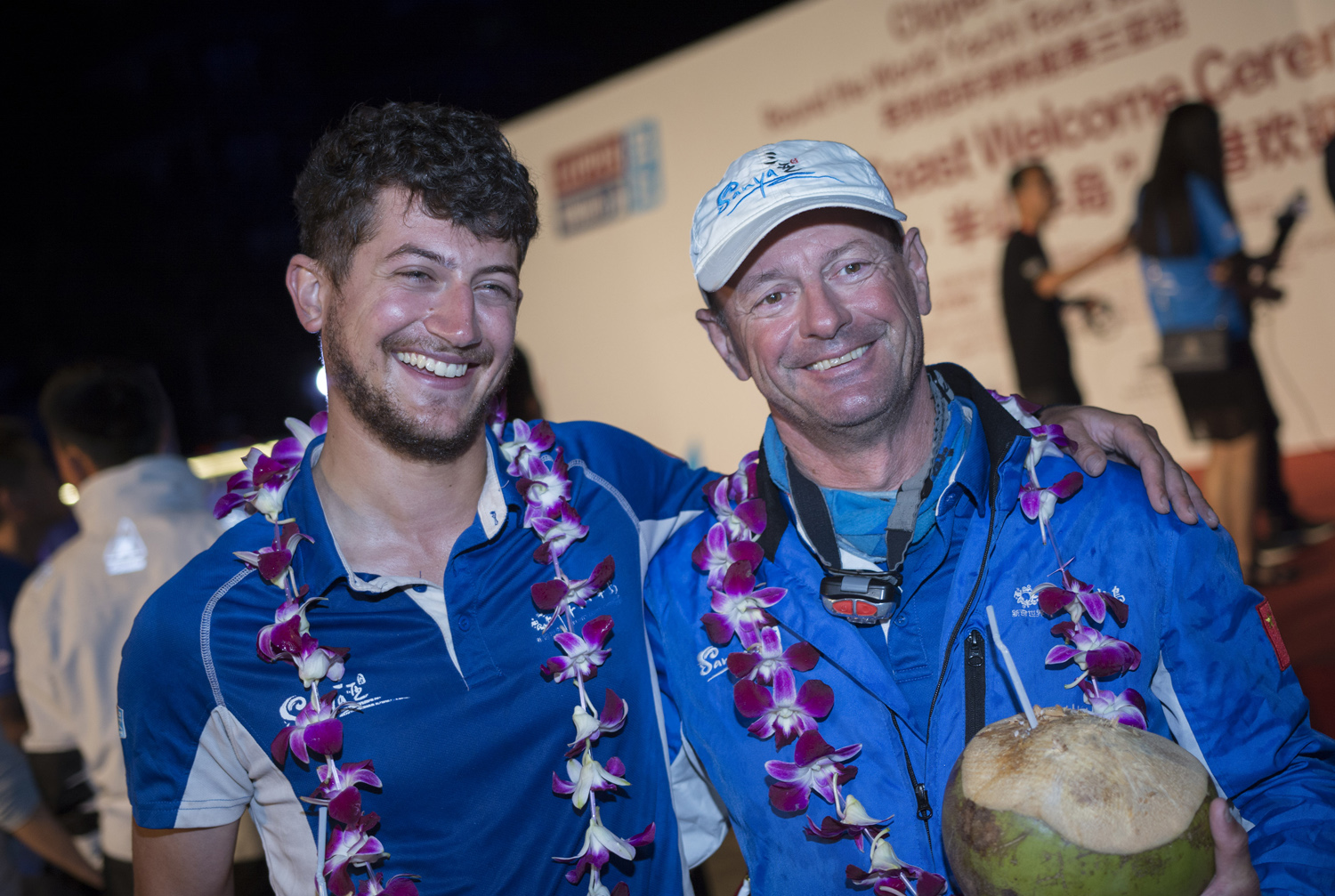 Image: Victor and Benoit on arrival into team home port, Sanya, in February

On signing up for the circumnavigation, Benoit said: “For me it was a once-in-a-lifetime opportunity. I have been sailing all of my life in Europe and the USA and I have raced since I was very young. I was keen to try my hand at more ocean racing, and it had to be the whole way around.”

Whilst for some people, being stuck on board a modern 70 foot racing yacht thousands of miles from land in the middle of an ocean with their father, or indeed son, may not be something that’s particularly high up on the bucket list, for Benoit and Victor Ansart, it has been a completely unique experience which has brought the duo even closer than ever before. 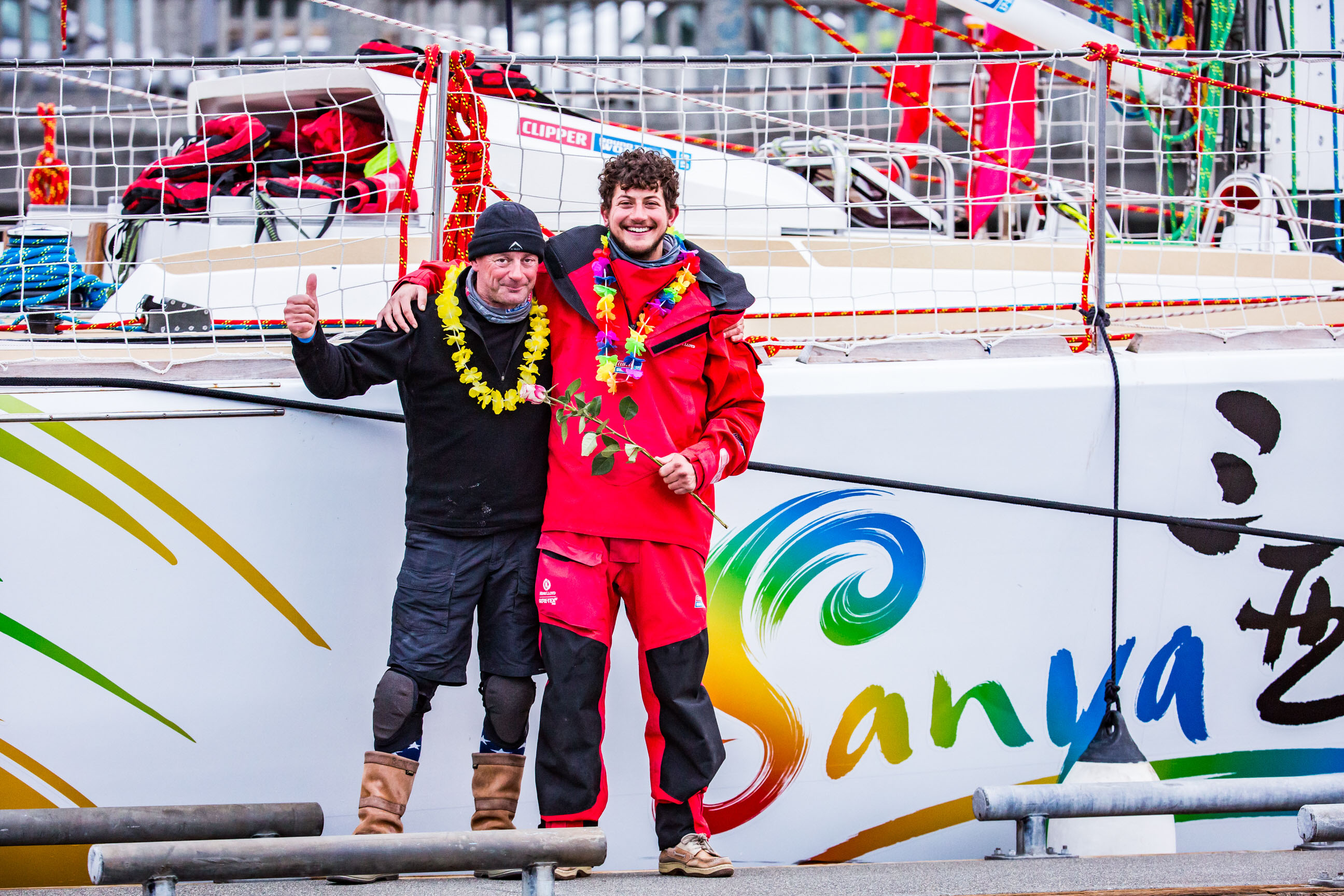 Victor said: “Honestly, it has always been a dream of ours. When I was little, we always talked about crossing oceans and exploring the world, so this is a dream come true to do this together!”

After just completing 5,600 gruelling nautical miles (nm) and spending almost a month at sea, battling hurricane force winds and waves up to 14 metres, officially a Phenomenal sea state, Benoit and Victor, and their Sanya Serenity Coast team, crossed the finish line after completing the tough Race 9, nicknamed ‘The Big One’, in second place. 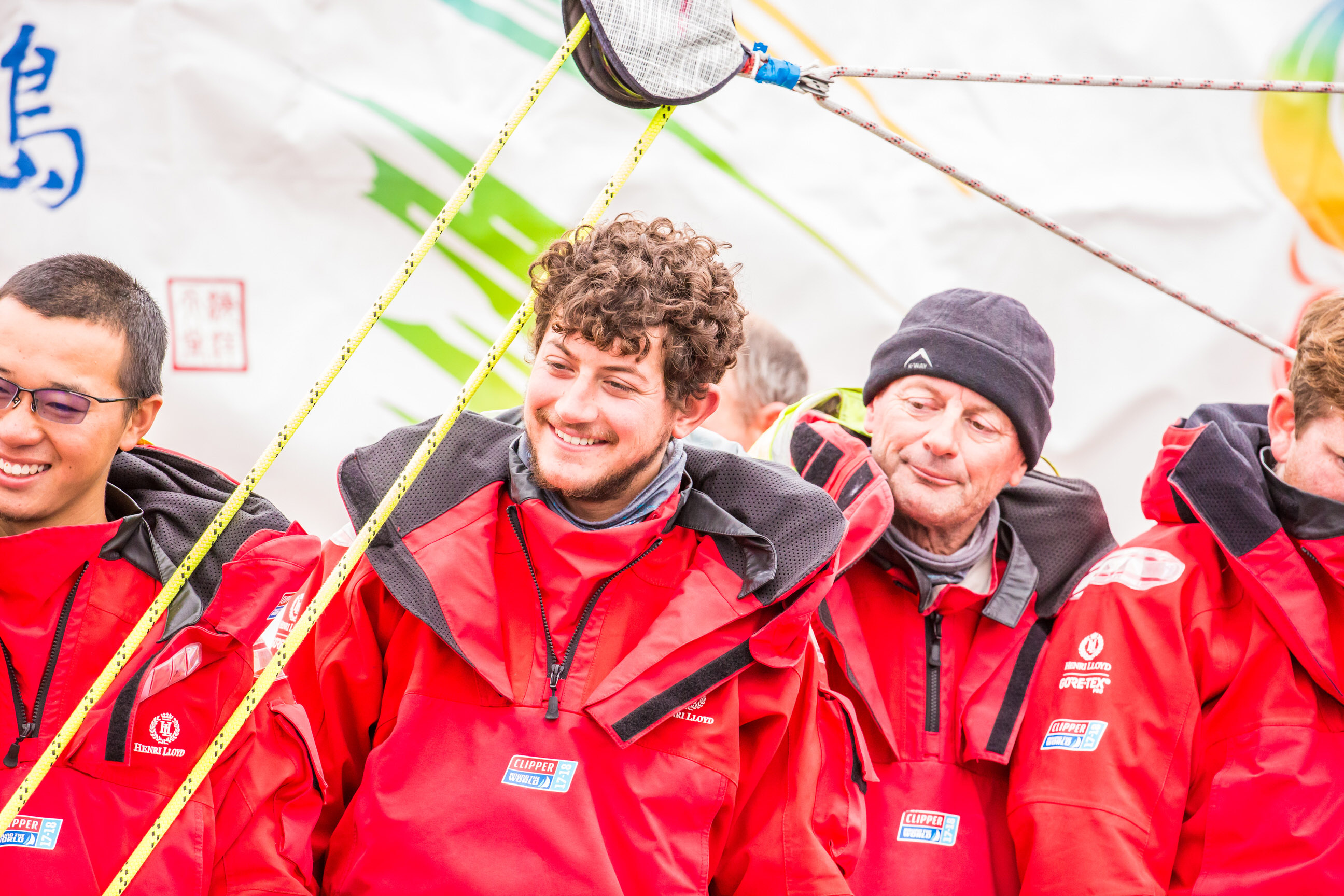 Speaking about the conditions on the latest race, Victor said: “It was quite the adventure! The waves were absolutely massive but it was spectacular. The boat handles it really well and we rush down the waves at full speed. We got close to the Clipper Race record for boats speed when we reached 33.9 knots.

“When you’re steering down at those speeds, you don’t want to look backwards as its really quite scary! Just like a giant rooster tail out the back of the boat. The water changes colour, it goes from grey to aqua marine and at night it glows a really bright green from all the plankton, which sprays up everywhere. It really is spectacular.” 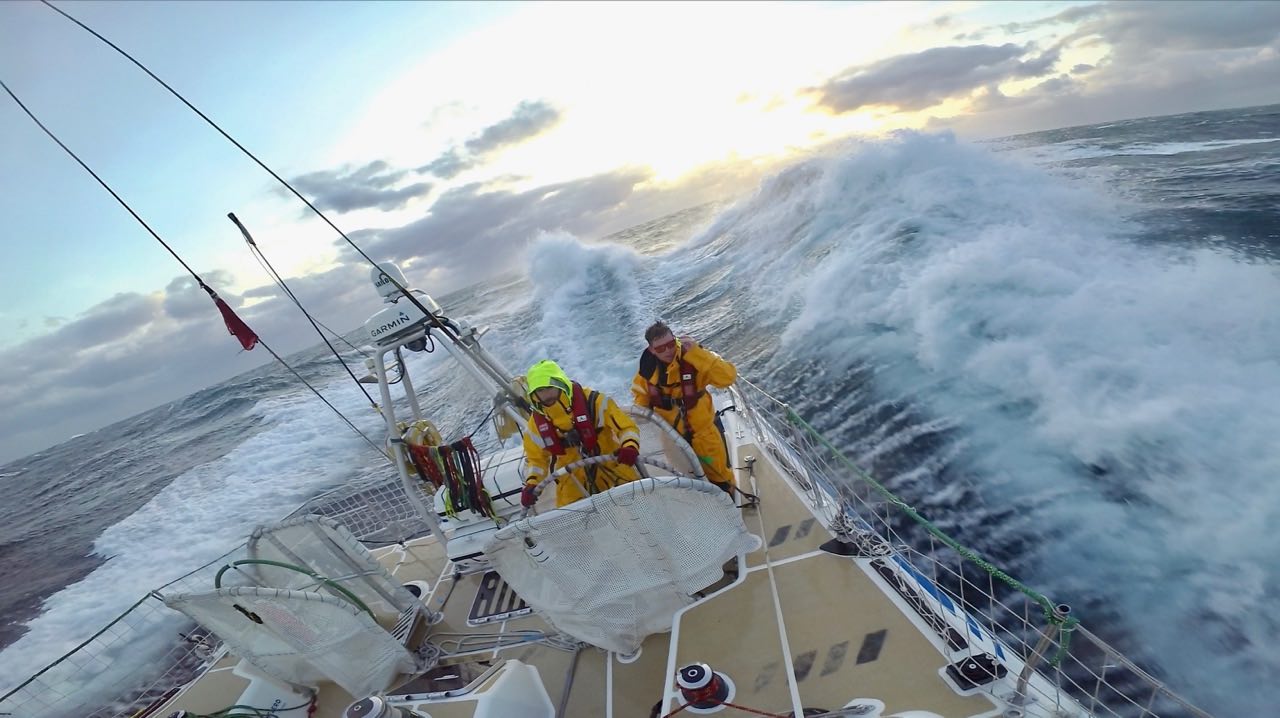 Image: Weather conditions during the latest race, taken by Ming on board Sanya Serenity Coast

Benoit, who was put on the same watch system as his son for the Mighty Pacific Leg, recalls how special it was to be able to share such an experience with his son: “Being able to share this was amazing. We have sailed together since Victor was very young so being able to do this together is very unique.

It was a dream of a lifetime to race around the world but to be able to do a part of it with my son, Victor, and especially doing this Pacific race together was amazing!”

Victor adds: “And after 27 days at sea, we are still getting along!” 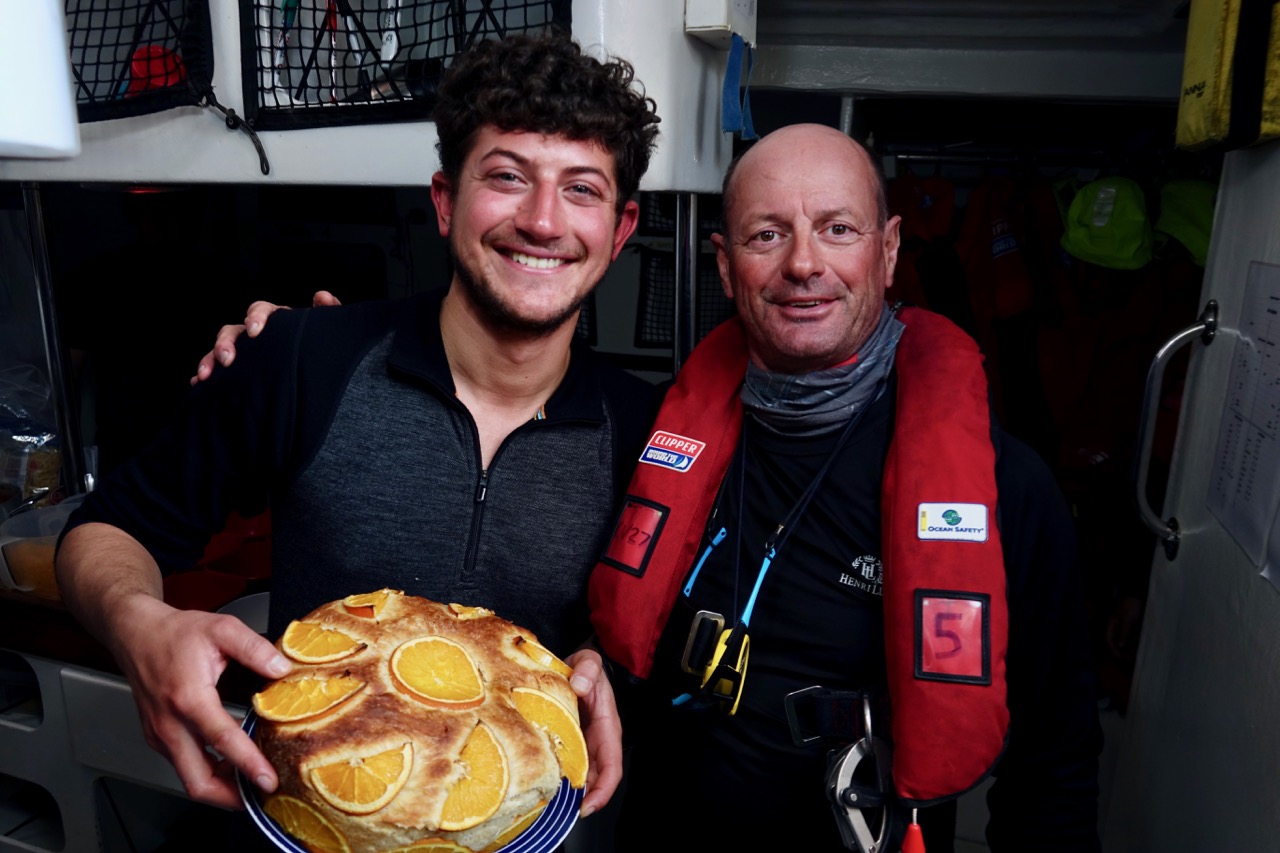 Image:Victor celebrates turning 26 on board, taken by Ming on Sanya Serenity Coast

For Victor, the arrival back into his home country was due to mark the end of his Clipper Race adventure, having originally signed up for Leg 5 and Leg 6 of the race. However, two legs were just not enough, Victor is now due to return for more ocean racing and will pick up the race again for the final Leg, Leg 8, when the fleet reaches New York in mid-June.

The addition, though last minute, got the seal of approval from his father who said: “We are not sure if he will be on board Sanya Serenity Coast again, we might be racing against each other next time!

“But I think it’s just such a great opportunity and experience for him. I have done the Atlantic a few times before and I think it is great for Victor to do it following the Pacific, too. I am very supportive.” In the meantime, the duo is happy to have reached their home country. After racing over 30,000 nautical miles to get there, Benoit says: “We are home! We did it! It’s very good to get back here onto more familiar ground.”

Victor says: “It’s awesome! I can’t wait for the craft beer, too!”

From Seattle, Benoit will race down to Panama and up to New York, which forms Leg 7. From New York, both Victor and Benoit will race across the North Atlantic to Derry-Londonderry, Northern Ireland, then on to Liverpool, UK, where they will arrive with the rest on the crew on 28 July.

Think you have what it takes to compete in the 2019-20 edition of the biggest round the world yacht race? Find out more and join the race here.

Local Seattleite adventurers who are feeling inspired by the crew’s experiences, free open boat tours will be running all week (24, 25, 26, 27 April - 1000 to 1900 at Bell Harbor Marina). Bring the family, meet the courageous crew and explore the vessels they call home for up to a year on the world’s oceans. Perhaps in two years time it could be you arriving home after taking on this epic challenge.