Hundreds of locals lined the walls of Yacht Club Punta del Este today to welcome in the next five teams to race into the Uruguayan city. Dare To Lead took fourth place, then just over one and a half hours separated the teams placed in fifth to eighth position. This a remarkable feat considering Race 2: The Commodore’s Cup was over 5000 nautical miles long and because the fleet had experienced a wide range of weather conditions from the lull of the Doldrums to the strong gusts courtesy of Storm Lorenzo. The close results have surprised everyone who has been glued to the race viewer for the past 28 days. 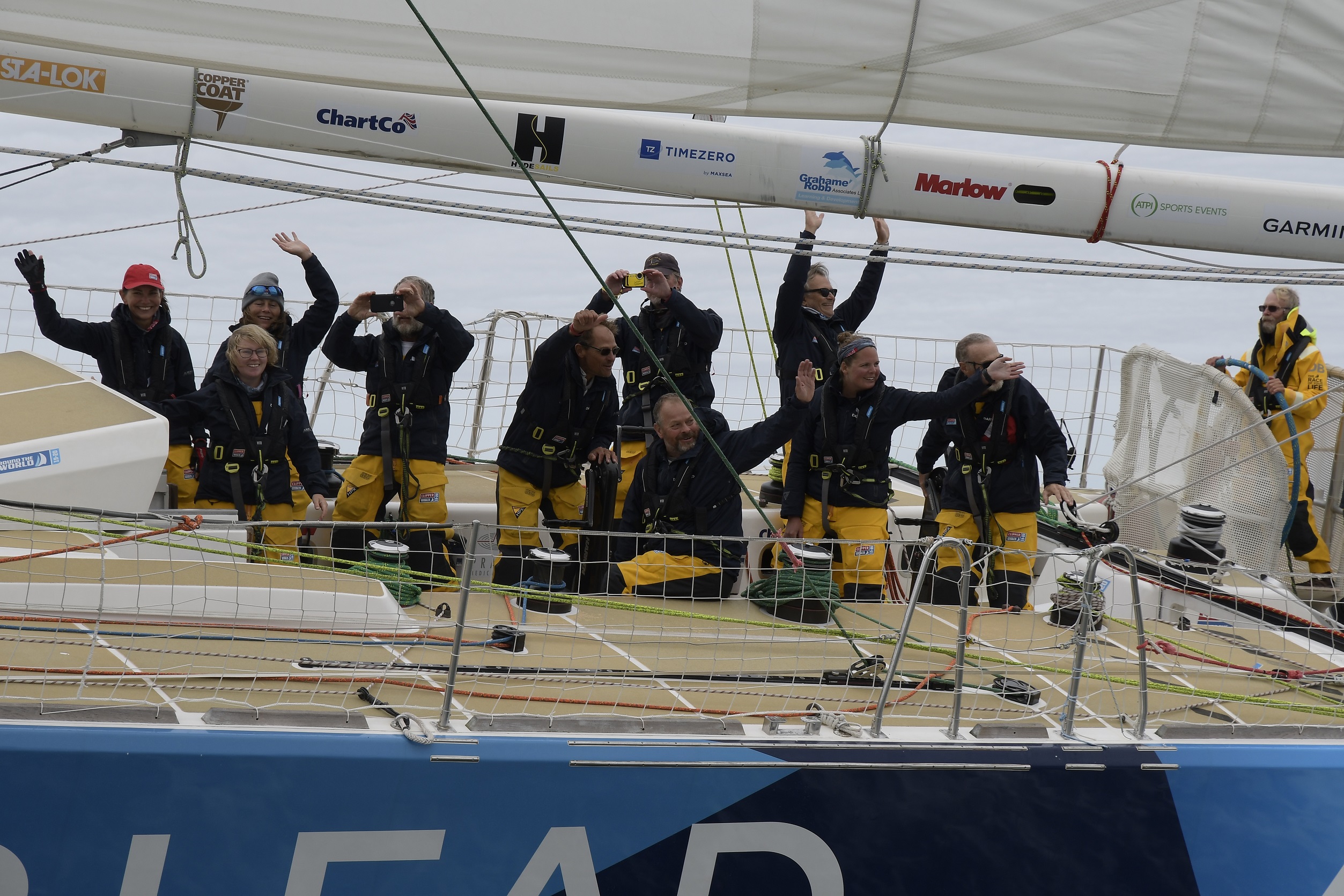 First to come in, hot on the tail of Ha Long Bay, Viet Nam, was Dare To Lead arriving into the marina to cheers of supporters and fellow Clipper Race Crew. Guy Waites, Skipper of Dare To Lead said “It’s been a great race for us, second in Race 1 and fourth in Race 2, two results for us in the top part of the fleet so we are very happy. 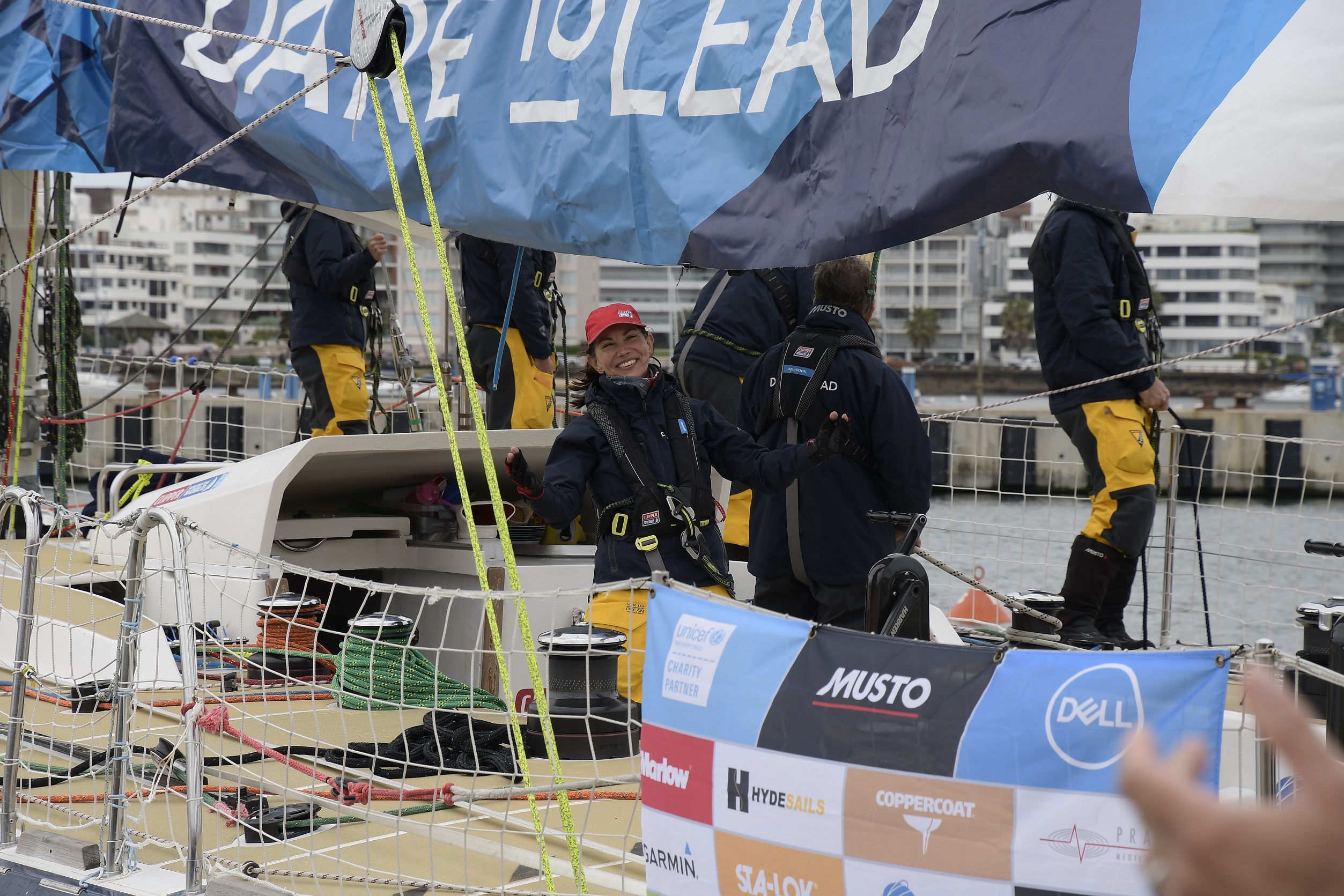 “In the last 48 hours it was work, work work when we did more sailing that we did in the whole four weeks. We had every wind range and angle, every sail up and down. The crew has pulled together so much, they can be proud of what they achieved.” After two days of battling through squalls and navigating through electricical storms, the fifth, sixth, seventh and eighth place finishers, Unicef, Zhuhai, Seattle and WTC Logistics respectively, all completed Race 2: The Commodore’s Cup in very quick succession. In fact, just one hour, 33 minutes and 37 seconds separated fifth and eight place. And only 21 minutes and 37 seconds separated Unicef in fifth place and Zhuhai in sixth. 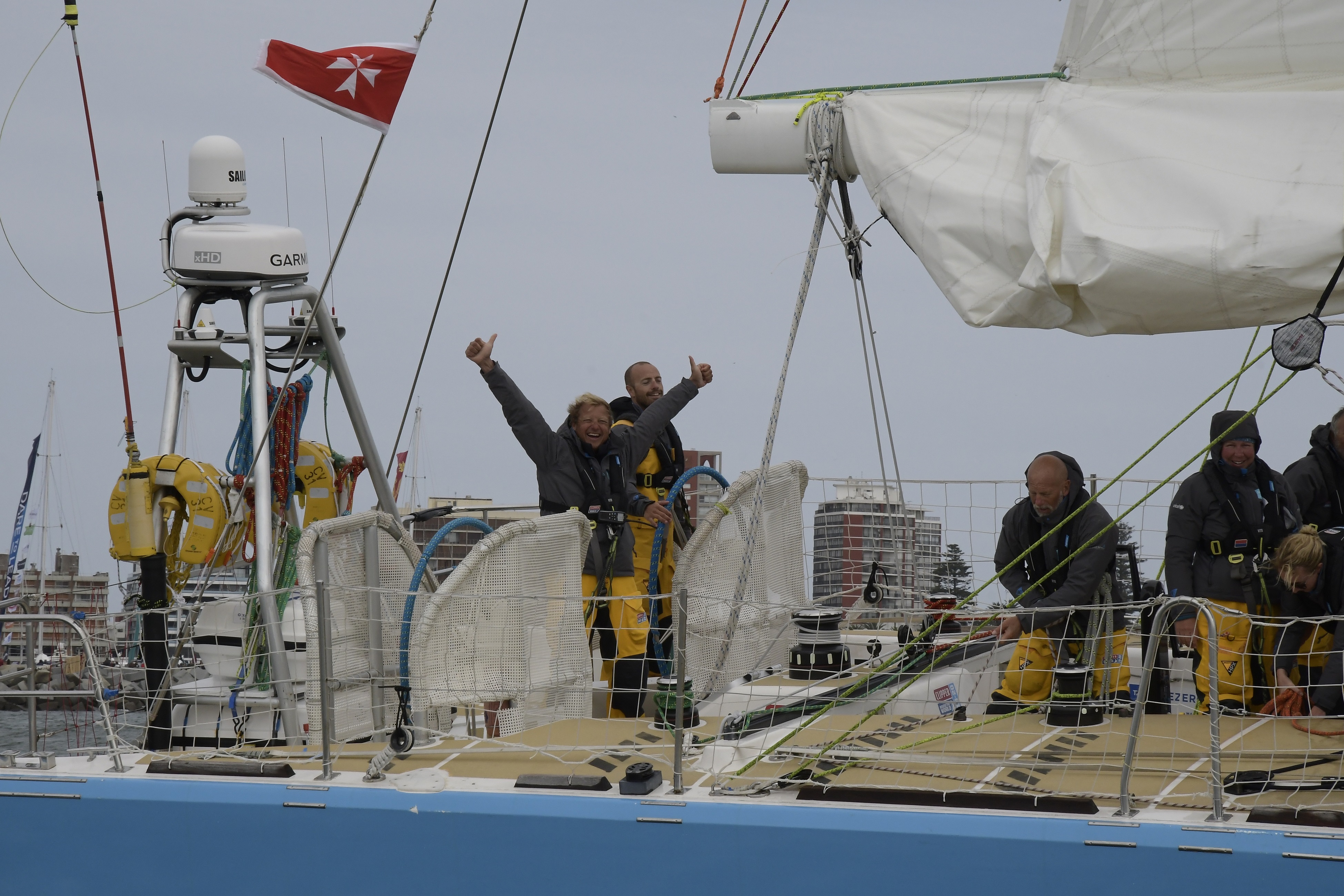 Unicef took fifth, a place higher than its result in Race 1, when the team found itself stuck in a wind hole coming into Portimao and dropping from second place to sixth in the final hours of the race. Unicef Crew member Jayne Rafter, who has competed in Leg 1 and finishes her Clipper Race journey here, is sad to be leaving the team in Punta del Este. She said: “The past 48 hours have been the most amazing experience. Fast and furious. But the whole thing has been absolutely incredible too. There are lots of ups and downs, like living on board. You are at 45 degrees some days and you think “oh no, not another day like this”, when you get out of your bunk and slide from one side of below deck to the other. Galley duty was exhausting but I loved it. 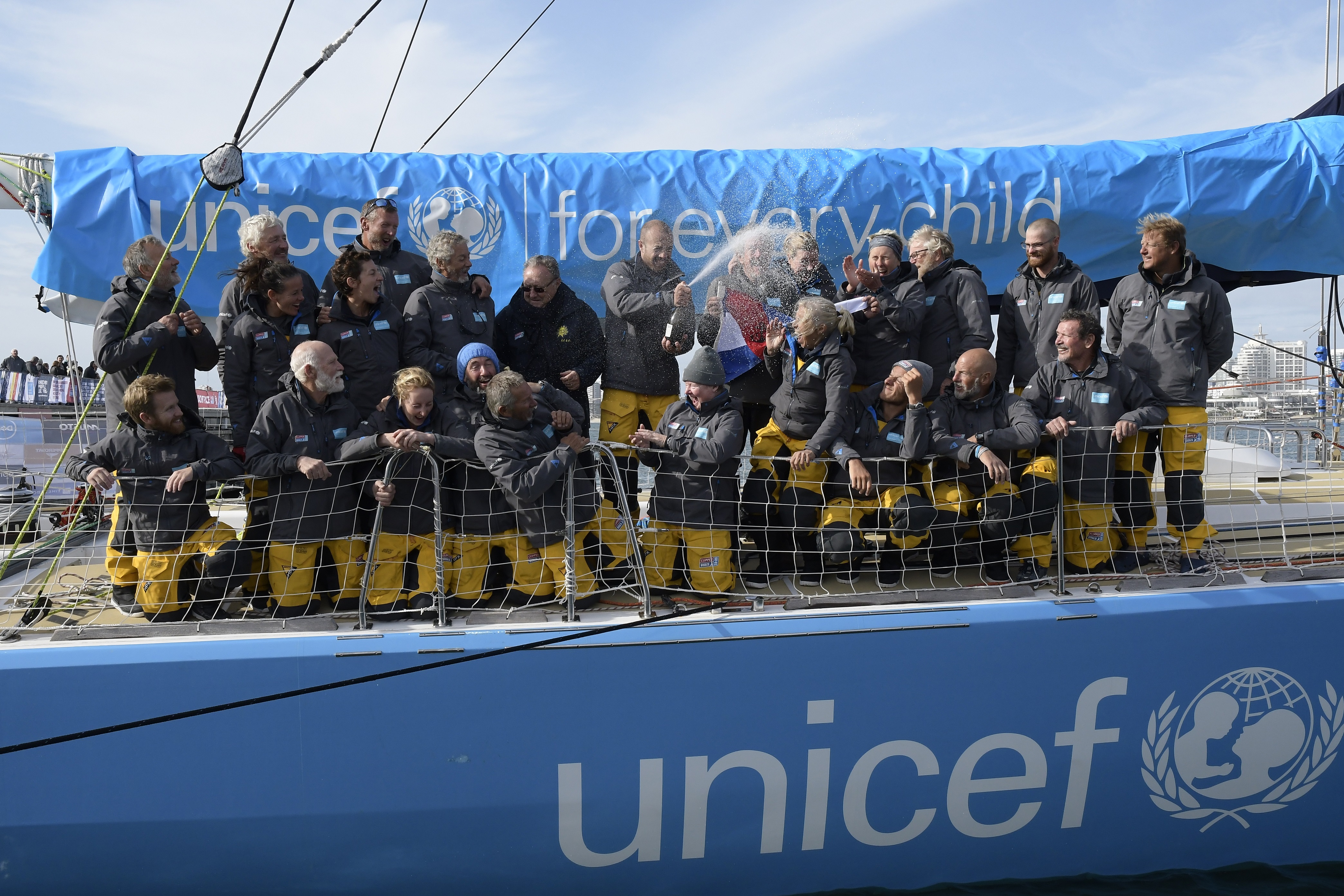 “And sailing in 86 knots of wind was exhilarating. The experience has been a bit like giving birth. You forget the pain you’ve been through and want to do it all again” 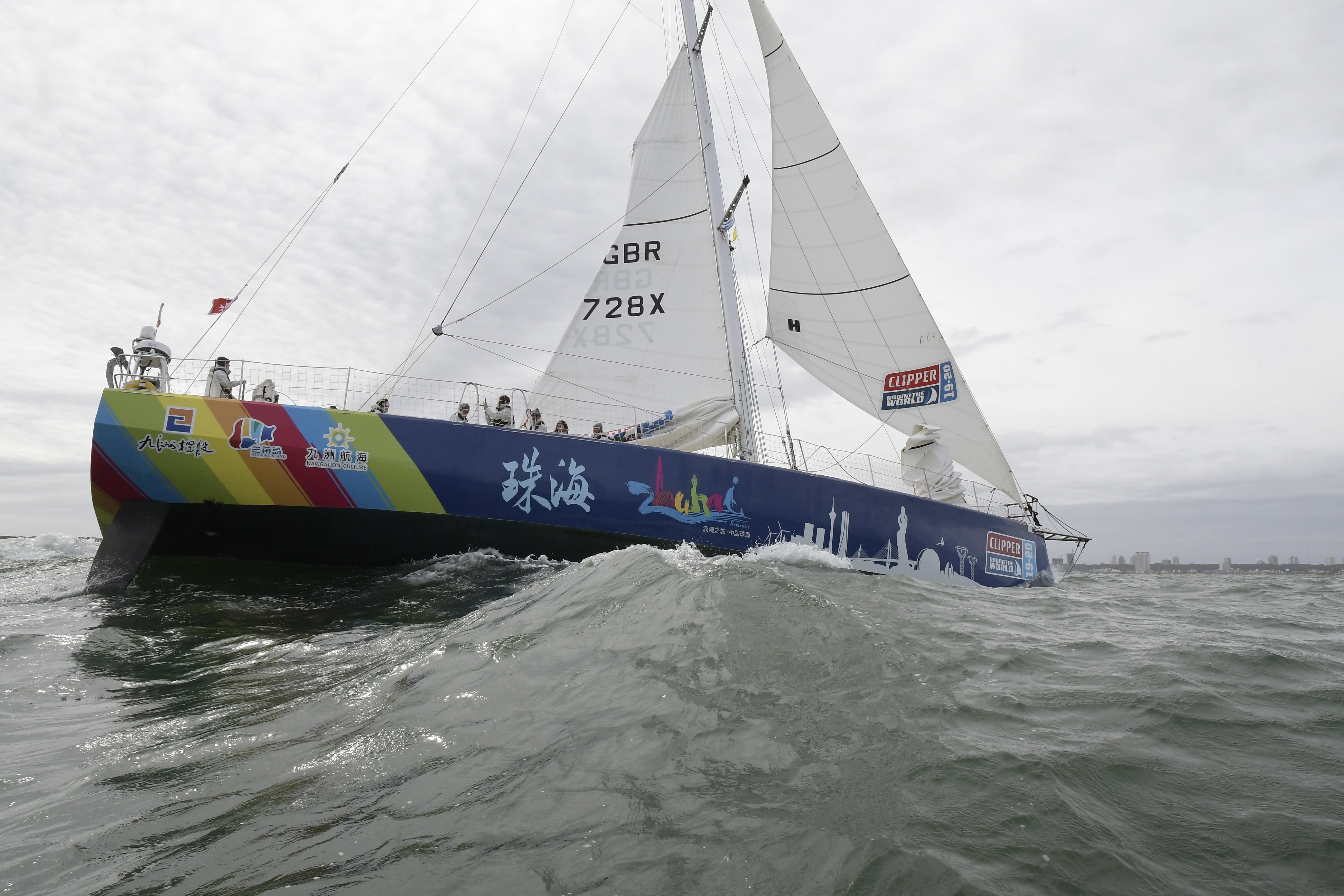 Only 21 minutes separated sixth place Zhuhai and Unicef, with the teams jostling for positions for much of this race. The arrival was particularly special for Zhuhai Skipper, Nick Leggatt, who said it was good to be back in Punta del Este. 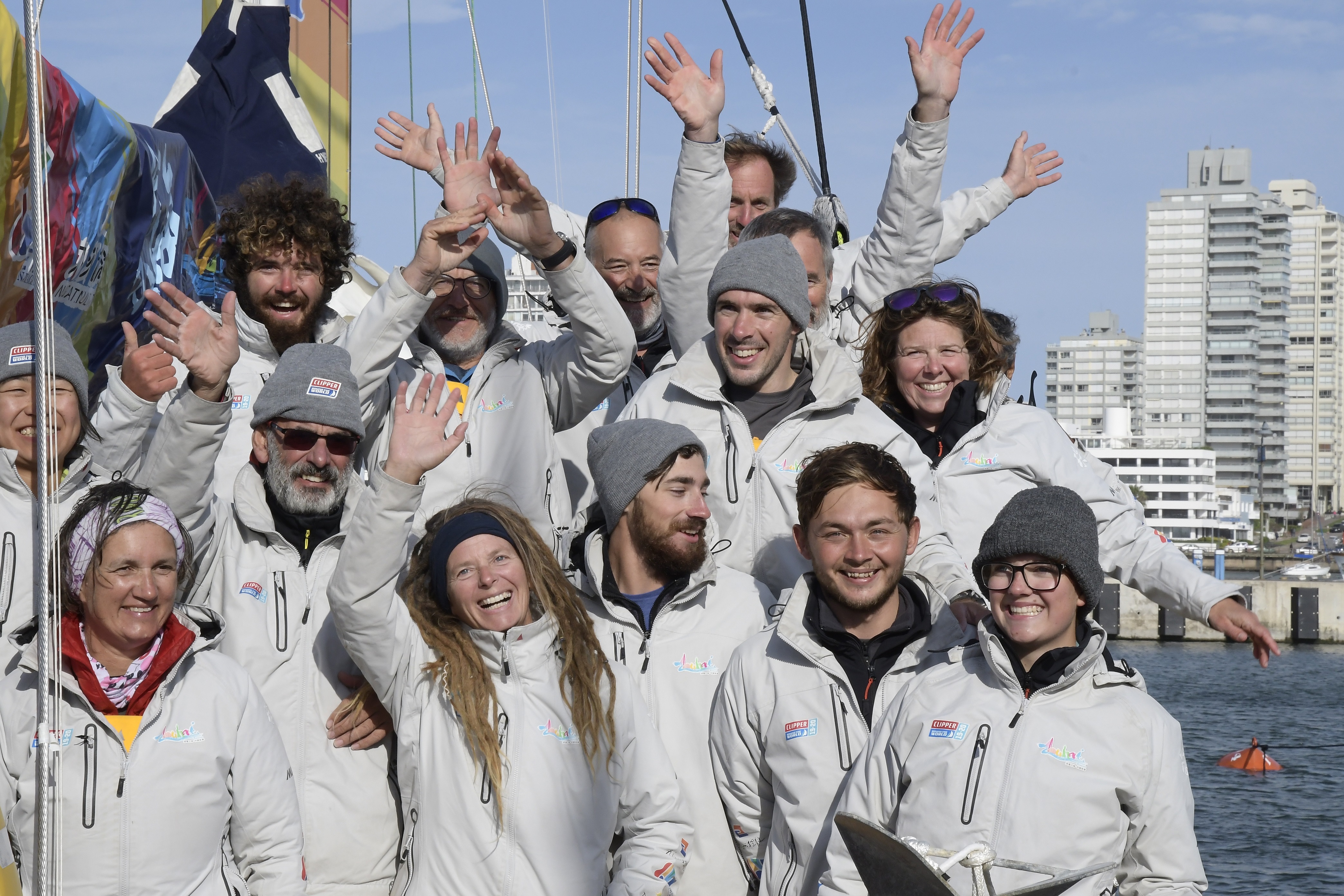 On the young crew on Zhuhai, Leggatt said, “We have three 18-19 year olds in the team: Sophie, Callum and Robbie and I’ve really enjoyed having them on board. Callum was watch leader on Race 1 and Robbie on Race 2, with Callum supporting as coach. Sophie did a lot of helming, developing into a very capable helmsman on this last race. She brings a great enthusiasm to the team and is always keen to get involved." He continues: "Since my first visit to Punta del Este in 1985, I’ve been back a few times, the last when I previously sailed around the world. I’ve always found it to be very pleasant and relaxing. For me, one of the highlights has to be the asado and the crew are looking forward to it to.” 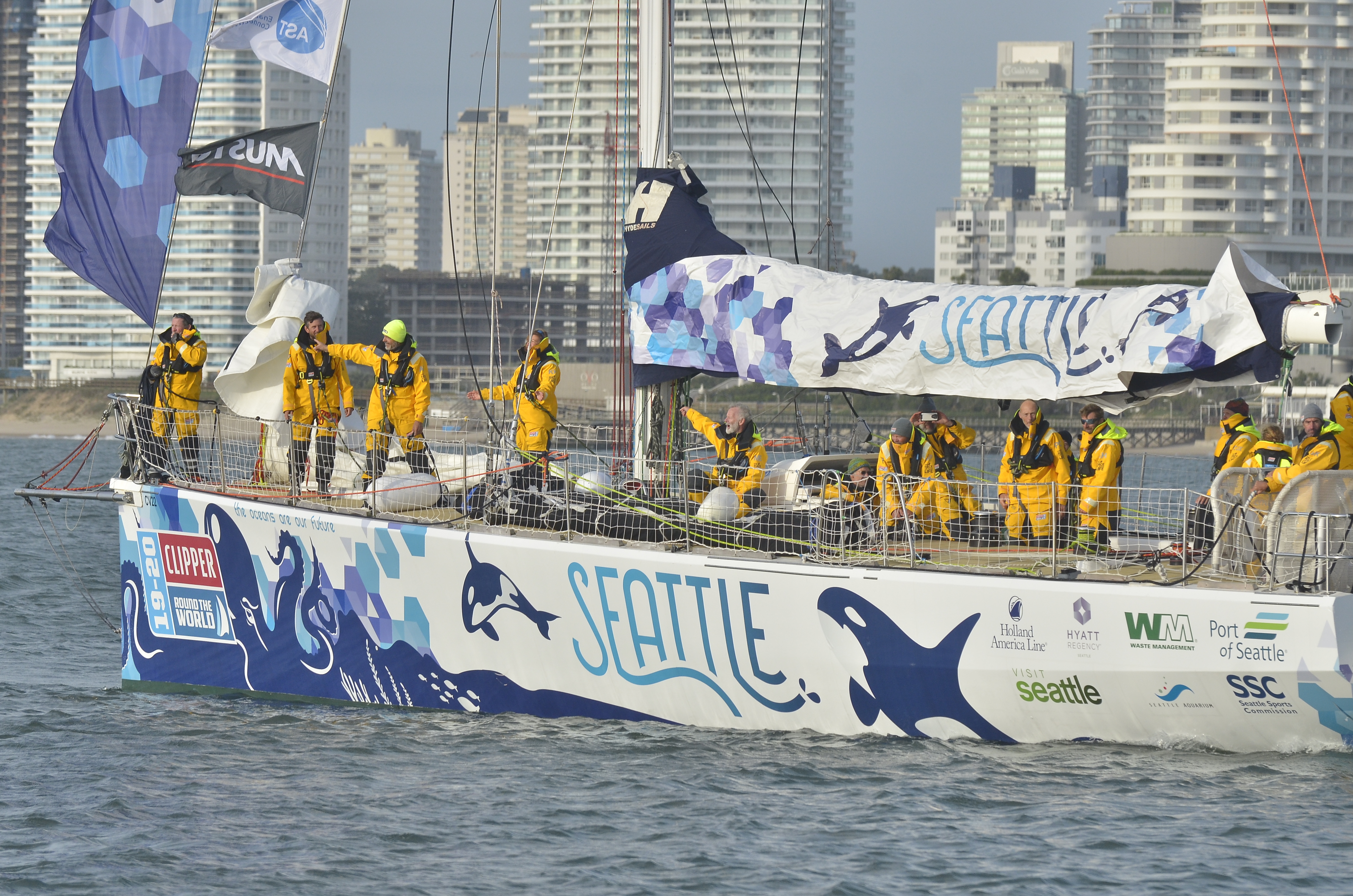 Seattle made its entrance into the Yacht Club Punta del Este, in seventh place, just over half an hour after Zhuhai. This close proximity was apt as the team often had a race within a race with Zhuhai and Unicef during Race 2, switching race positions and keeping fans gripped to the Race Viewer. 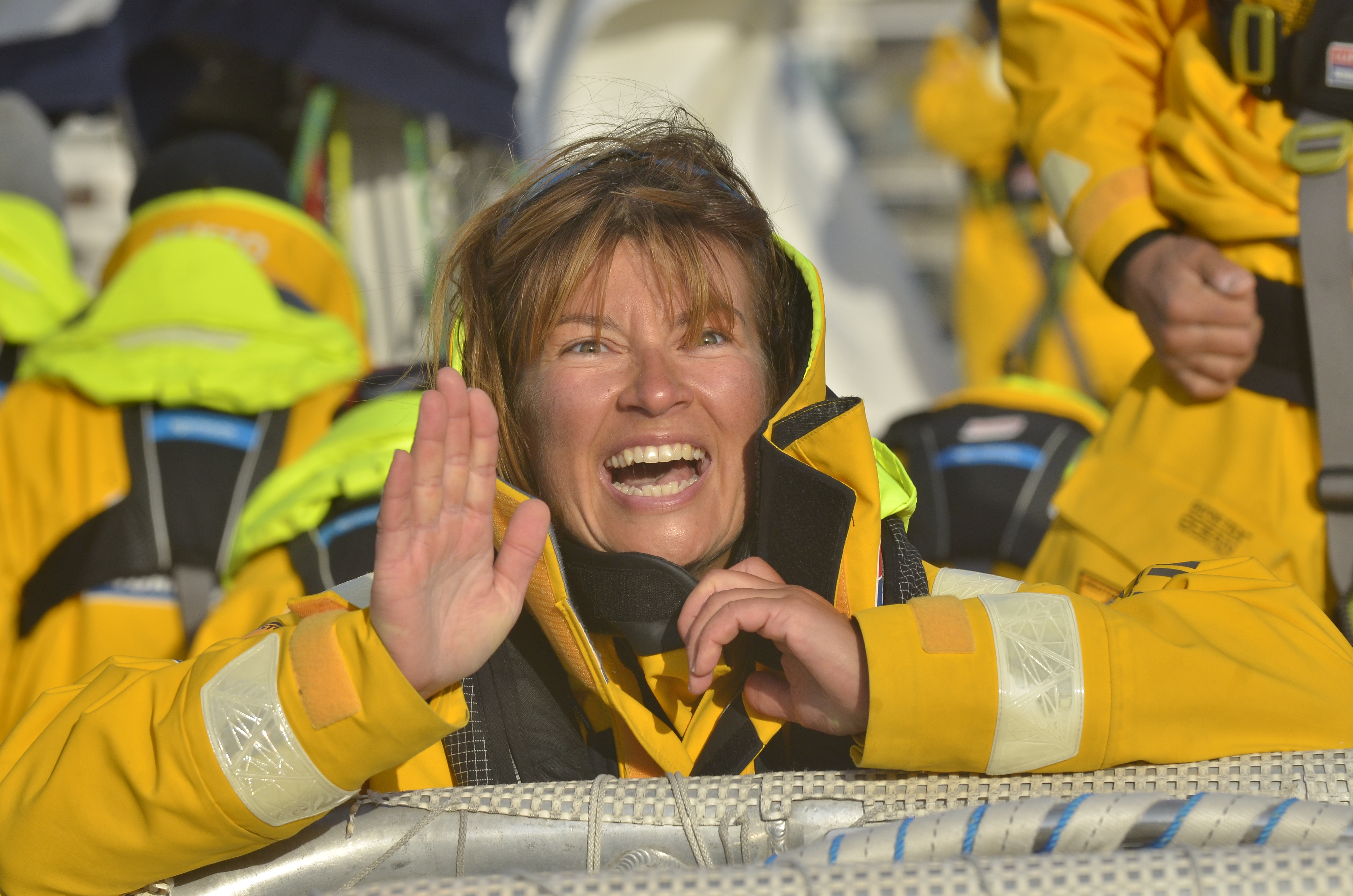 The Seattle team were also innovative when it came to long periods of no wind, one night holding a movie night under the stars, with a film projected onto its sail.

Crew member Dawn Widdowson, a round-the-worlder on board Seattle, sails back in her home country New Zealand, and has her own boat, but says racing on a Clipper 70 is something completely different. And the conditions they have faced no comparison. She said: “In my boat you wouldn't go out in those conditions, you’d go home and have a drink! But it’s really safe on board a Clipper Race yacht. 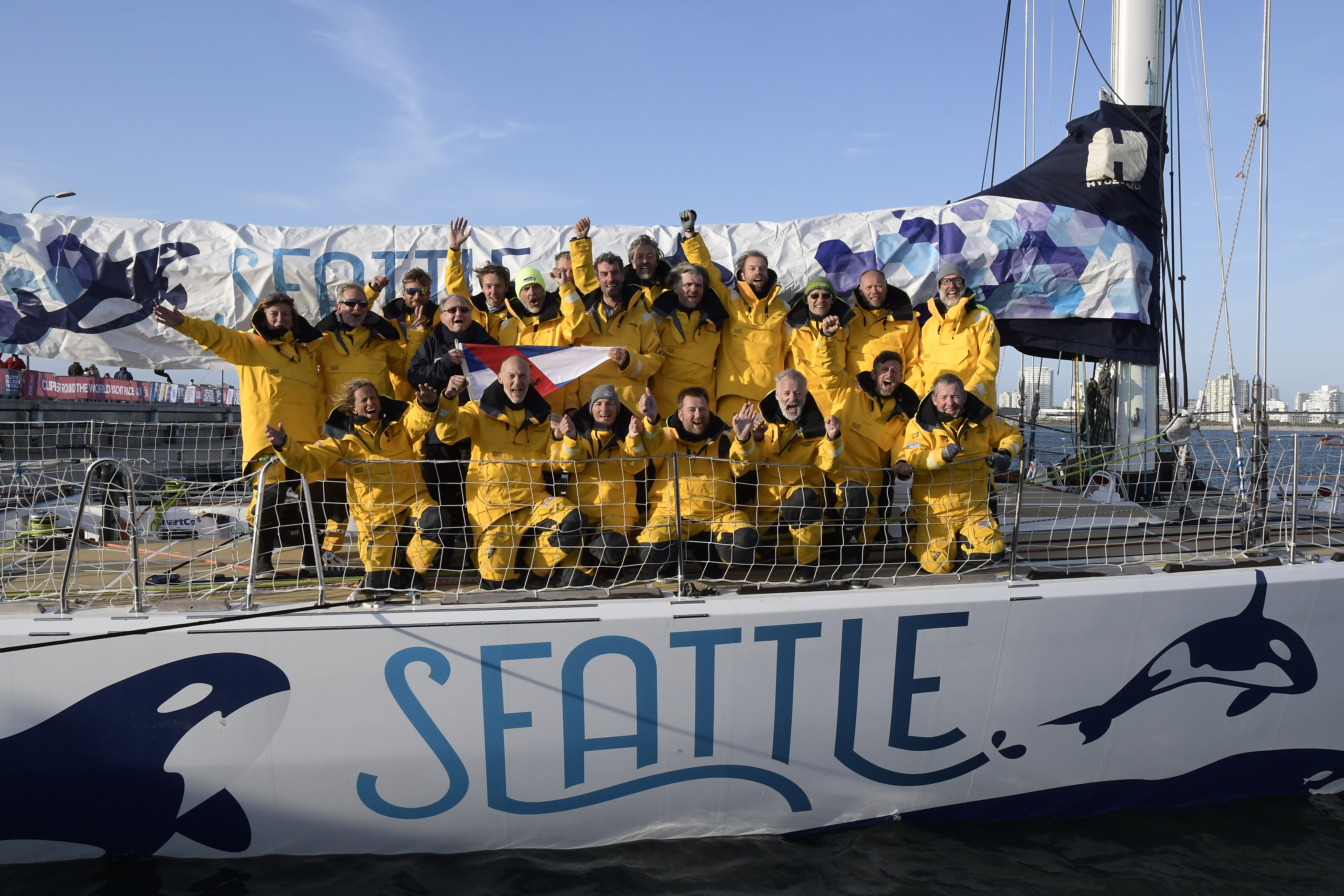 Dawn has been racing against a fellow circumnavigator on WTC Logistics, who also just happens to be her husband, Paul. She says: “So far I’m two up so I’ll be here with a beer for him. For a race that’s over 5000 miles and to finish in a sprint event with four boats so close is incredible. We were racing seriously racing against each other. We had overtaken Unicef, then Zhuhai, but they got back at us. Then we had WTC Logistics right beside us last night, and everyone just coming to one point, it’s been absolutely amazing. To think that after 5000 miles you can finish like that, it’s incredible.” 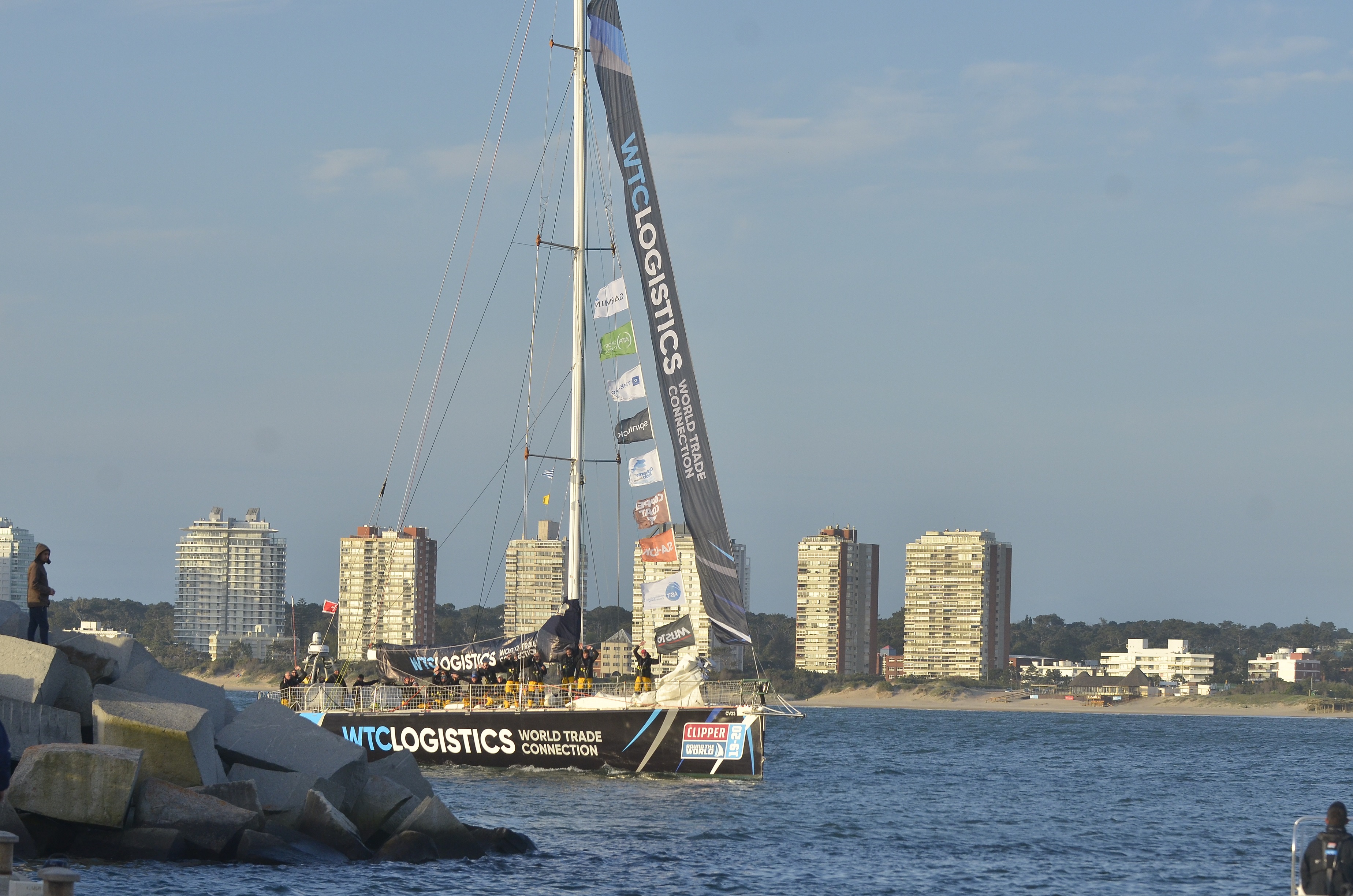 It is not only the husband and wife crew who have been going head to head. In Race 2, WTC Logistics enjoyed some close-match racing when they joined Zhuhai and GoToBermuda for some thrilling racing, with a mere few nautical miles separating the trio at one point. The highly tactical marathon across the North and South Atlantic saw the team placed between 5th and 10th as they jostled with other teams to move up the leaderboard. 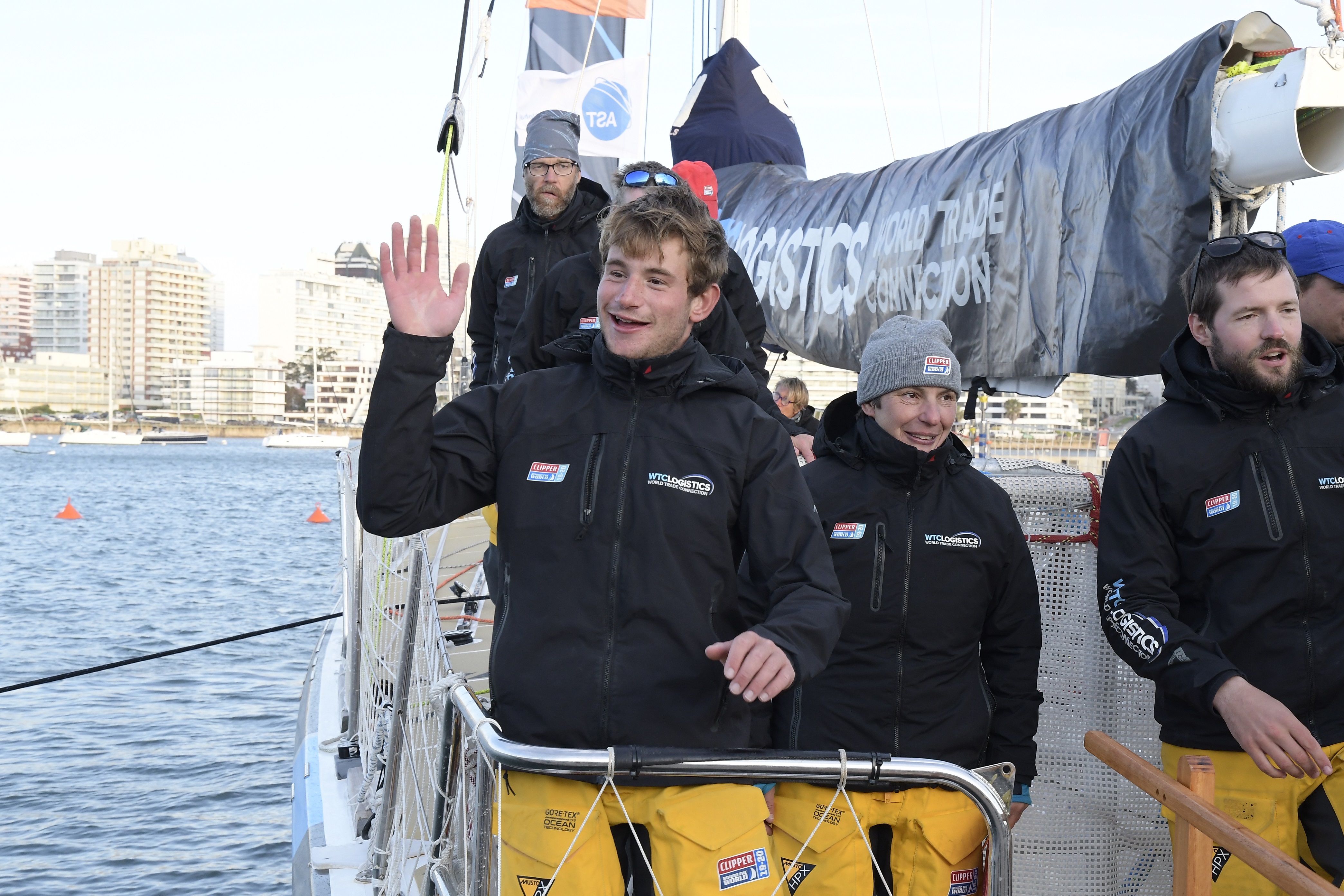 WTC Logistics Skipper, Mark Burkes, said: “It was a long race, challenging for everybody on all the boats. We had a lot of new sailors when they started the race and they've all done particularly well in the past week. We’ve had Southern Ocean style squalls, 60-80 knots which was a real baptism of fire but they’ve done fantastically.” The yachts will be berthed in Punta del Este until the start of Leg 2, to Cape Town on the 23 October. With the Host Port, the Yacht Club Punta del Este giving crew and supporters a taste of Uruguay with events including a tango show, an asado (traditional Uruguayan BBQ) and wine tasting from team supporter Garzon.