For most people an office with a view comes complete with comfy chair, desk, plus walls and windows to protect from the elements, however for Clipper Race riggers Alex Dower and Greg North, who are mostly found working 90 feet up the mast of the world’s largest fleet of matched open racers, their elevated working environment is anything but conventional.

Put to the ultimate test during the circumnavigation, it is essential the fleet’s rigging, the wires and components which run up the mast and help provide the foundations for the whole yacht, can stand up to the challenge. With the fleet’s refit well-underway in preparation for the eleventh edition race next summer, we caught up with Alex and Greg behind the scenes to discover what it takes to prepare the twelve Clipper 70s for their big challenge.

“The first rigging job during the refit is un-stepping the mast,” says Alex, who joined the race team in 2013 to work on the commission of the third generation fleet. A former dinghy instructor, Alex moved onto bigger boats and has worked on a variety of vessels around the world, including being a former rigger on Tall Ship Stavros S Niarchos.

“To un-step the mast we crane it out from the yacht and lay it in trolleys in the yard. Once it is safely down we undress it, which is less exciting than it sounds! We remove all the standing rigging and spreaders which leaves a bare mast at ground level, giving us fast and easy access to the entire spar.

“We then inspect the rig by following the same rig check that the teams will carry out at every stopover on the race. This is a detailed visual inspection from top to bottom of the rig which covers a wide range of aspects from important structural checks to general wear and tear.

“On a stopover, if the crew identify any consumable issues such as strop replacement then they confidently fix these themselves, but any technical problems such as spar repairs or structural work will be reported to myself or Greg so we can plan our repairs for the stopover timetable.

Alex adds: “During the refit, we also carry out an extremely detailed structural inspection from which we plan any welding or reinforcement work should it be required.”

Alex and Greg carry out a number of fleet wide modifications at this time too, often based on crew and Skipper feedback from previous races. For the 2017-18 edition the fleet will fashion new folding steps that are being fitted near the mast head to improve stability for the crew while working on strops and blocks at the top of the rig. Bolts, rivets, strops and sheaves are replaced until everything is fully operational and fleet electricians replace the wiring, instruments and electrical components if required.

“The Clipper Race, by way of duration and the extreme weather faced along the route, is tough on rigs, and new standing rigging components (stainless wires and fittings) are fitted following every edition as a matter of course,” says Greg, who has been working on the race maintenance team, fitting and tuning rigs and building masts for the Clipper 68 and 70 fleets for more than a decade, since 2005.

“Alex and I measure out about 2.5km of new stainless wiring over the whole refit, cutting it to length. We then terminate Sta-Lok’s, our Official Standing Rigging Partner, new fittings to either end of each wire. We use Sta-Lok’s compression fittings, which are solid stainless components, and we manually fit each eye, stud, fork and bottlescrew with our comically large spanners! We use this stronger compression type because we have experienced greater wire fatigue with swaged fittings during previous races. Each wire has to be opened up and manually closed around each fitting which takes longer to fit than the swaged equivalent.” 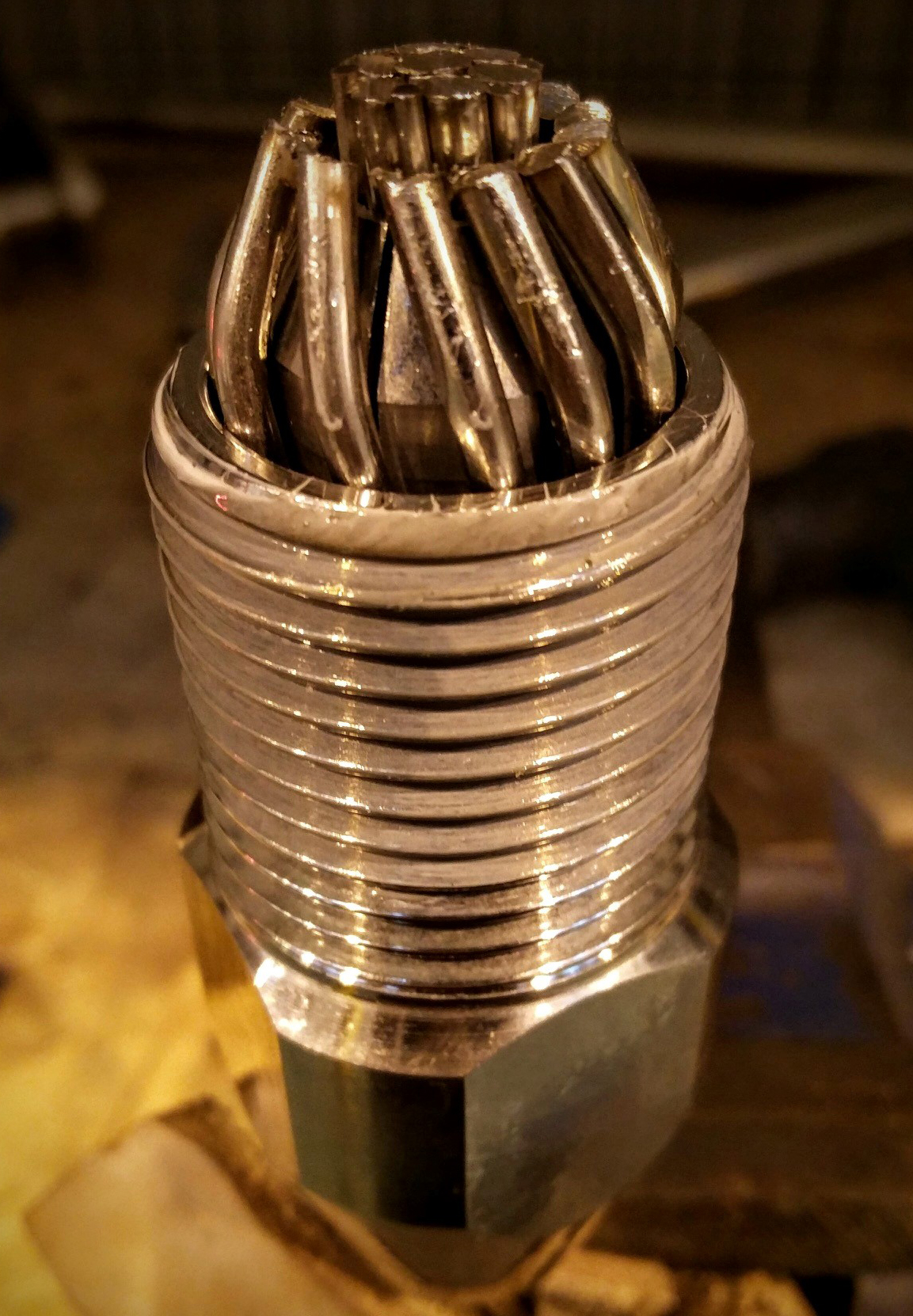 Once the wires are all cut and terminated, Alex and Greg rebuild the rig with brand new Sta-Lok components before stropping the rig up on a crane and re-stepping the mast back its hull.

Alex says: “It’s a bit like playing with a giant Meccano set so all in all it’s not a bad day at the office! Once a rig is up we start a repeated tuning process that continues throughout the race. As new fittings are sailed they tend to bed in, so we do our first retune mainly to take up any slack caused by the first real rig testing.”

Tuning is vital to ensure the rigs are set up within their recommended safe tolerances and the right wires are taking the right loads at the right times.

During the race, teams are not permitted to make tuning adjustments to the rigs as they compete unless instructed by the rigging team for safety reasons. This allows Alex and Greg to ensure that the rig settings across the fleet are as closely matched as possible. This scrutinous process is repeated by Alex and Greg at every stopover to ensure a fair and safe playing field across the fleet and that speed is found through weather routing and trim, rather than the advantage of rig tuning. 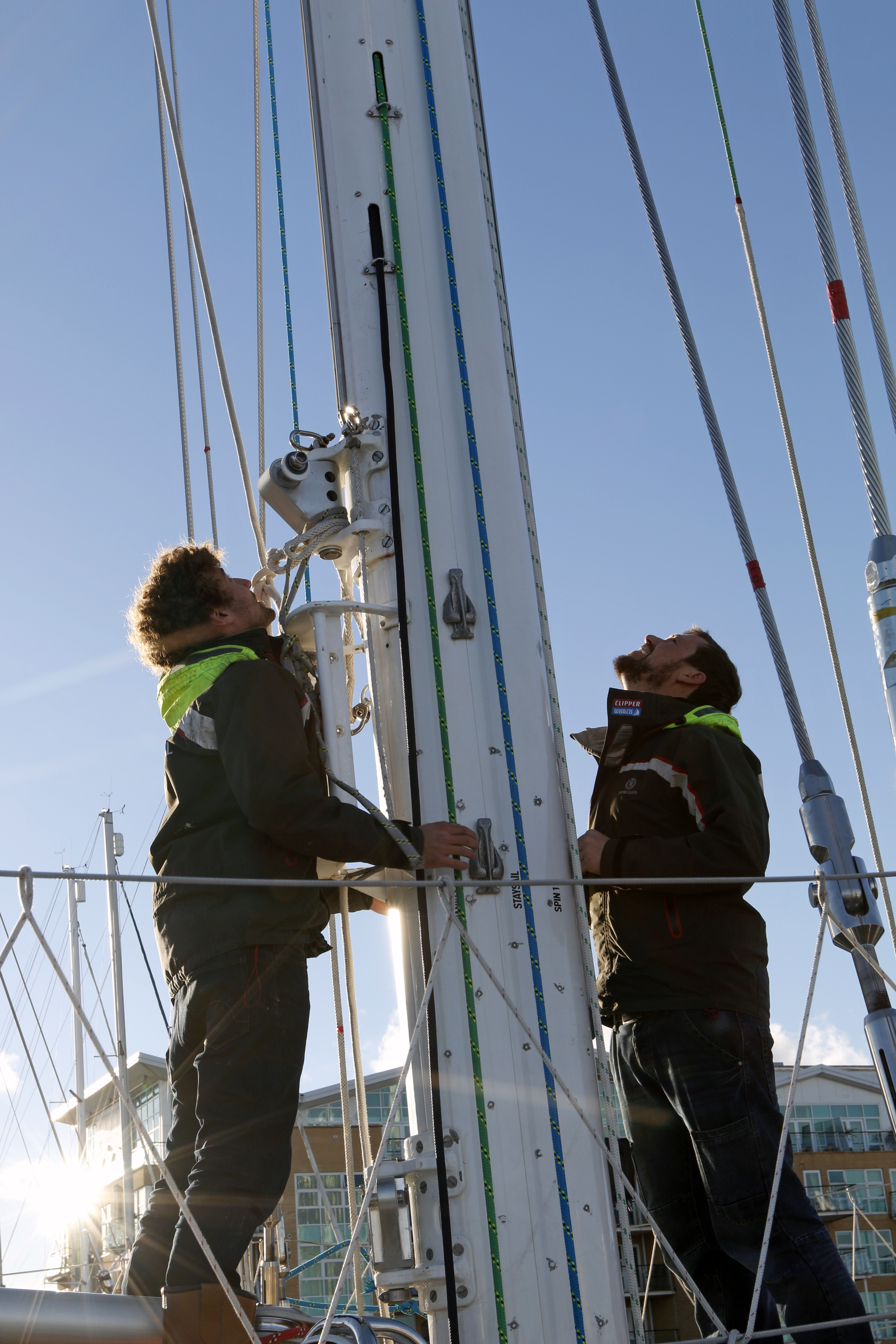 Left to right: Alex and Greg working on a Clipper 70 mast

In the last few weeks before Race Start in the summer, the rigs will also receive brand new running rigging to ensure rigs are equally matched. “All in all the rigging refit is a fairly physical task with all the climbing and heavy lifting,” says Alex, “but at least we save money on gym memberships!”

Heights might not be everyone’s idea of fun but Alex loves his job. “There is nowhere better to be than at the top of the mast, I’ve never wanted to be stuck at a desk pushing paper. I am looking forward to meeting the Clipper 2017-18 Race crew and to working with those who have an interest in the mechanical workings of the masts during their race campaign.”

Each Clipper 70 is in the process of being lifted and its mast re-stepped with Sta-Lok rigging. A total of 2,784 parts from across 10 Sta-Lok products are being fitted across the fleet in preparation for the Clipper 2017-18 Race.

To find out more about our Official Standing Rigging Partner Sta-Lok, click here.

Have you ever wondered what it’s like to race the world’s oceans? Well now you can relive all the action of the last race as our highly anticipated TV series ‘Race of Their Lives 2’ is now available to own on DVD!Follow our intrepid crew…

Today we are pleased to announce that Sta-Lok will debut as the first Official Standing Rigging Partner for the 2017-18 edition race.The highly accredited manufacturer supplies everything from wire rope fittings and rigging hardware through to hand tools and swaging machines, and is renowned for…