After nearly four weeks at sea and a variety of leaders, Visit Seattle tops the leader board going into the final stretch to Punta del Este. But, with less than 40nM separating it from second placed Sanya Serenity Coast and a similar distance between third placed Unicef and fourth placed HotelPlanner.com, the final podium positions are not a forgone conclusion just yet.

The cumulative impact of bonus points on the overall leader board will be seen after the battle for overall placings in Race 1 has concluded.

Whilst feeling the benefits of being back under spinnaker, Sanya Serenity Coast Skipper, Wendy Tuck, said: “It is all pretty straight forward for now, but as we get closer to Punta del Este things will change. There is a big hole of light breeze for a bit, so anything can happen. It’s going to be a race right till the end.” 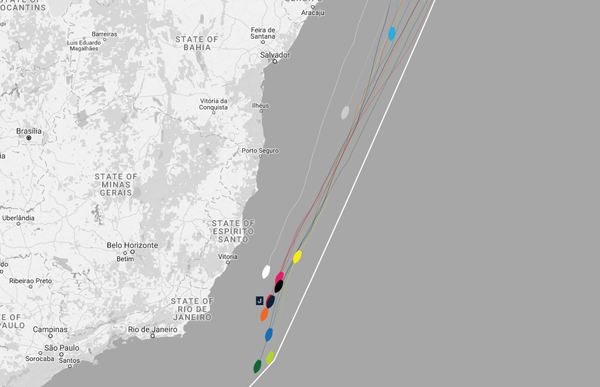 IMAGE: Positions at time of publishing (Qingdao in stealth mode)

HotelPlanner.com, currently in fourth place, has been avidly chasing down third placed Unicef for the past week. After a frustrating night Skipper, Conall Morrison, reflects: “We know that the mighty dragon, Qingdao, cannot be far behind us and our hopes of catching Unicef must be firmly shelved. I need to remember that ocean racing is not about short-term gains and a much bigger picture must be considered.”

Qingdao was in fifth place when Skipper, Chris Kobusch, opted to go into Stealth Mode at 0600UTC this morning: “We managed to overtake PSP Logistics yesterday afternoon and are now chasing HotelPlanner.com. Our main aim is to avoid any mistakes and resulting breakages on the last few miles and to defend the fifth position we are in.” With its position hidden from the rest of the fleet, it will be 24 hours before the results of his decision are known.

GREAT Britain and PSP Logistics are engaged in their own contest. With less than a nautical mile between them, spinnakers are back flying and concentration is required in order not to make a mistake that could cost them a position. Roy Taylor, PSP Logistics Skipper, said: “The battle continues with GREAT Britain and Qingdao and the Code 3 (heavyweight spinnaker) is up now as we try to keep them at bay.”

Andy Burns, GREAT Britain Skipper, reports: “The kite is up and we are crossing everything not to have any kitemares over the next week. Maximum concentration is required - no eating on deck, only motivational music. We are chasing down the pack as much as we can. This is definitely a game of the tortoise and the hare and hopefully our patience will start paying off soon.”

Garmin, still ahead of Liverpool 2018, is also happy that the wind has backed. Reporting that his crew are coping well sailing downwind again Skipper, Gaëtan Thomas, said: “We [are] still match racing with Liverpool 2018 and both of us hunting the next boats. Nearly a month at sea and for novices who never sailed before, I am really impressed with my team.” 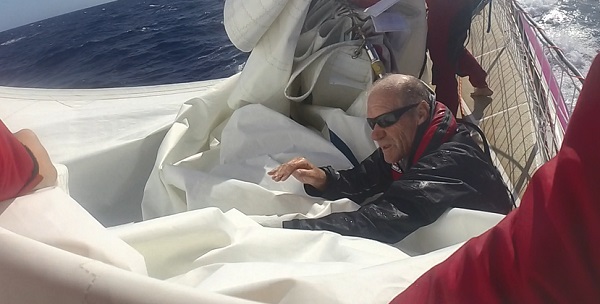 IMAGE: Dropping the Yankee on Liverpool 2018

Dare To Lead has been making rapid progress covering the most ground in the fleet over the past 12 hours. Skipper, Dale Smyth, reports: “Good fast progress to the south under spinnaker, meaning that living conditions have returned to some level of sanity again. Now it’s all about speed and gybe angles as we approach the latitude of Rio de Janeiro.”

Greenings and Nasdaq are finally seeing a let up in conditions. Nasdaq Skipper, Rob Graham, said: “Overnight the sea has calmed slightly and the wind has steadied and come just a little more easterly, meaning that we've been able to ease the sheets (finally) and accelerate!”

There is an intriguing forecast for conditions ahead for the fleet from Simon Rowell, Clipper Race weather guru, who reports: “The low developing in a couple of days just north of Punta del Este will make the final approach rather tactical for the leading group. There’s nothing particularly strong in the forecast, but the fronts are quite energetic so, as they pass over, they will bring strong squalls and very quick mean wind increases.” With an unstable weather system ahead, any strategy that requires specific details to succeed will be high risk.