Cementing a fifth day at the top of the leader board Visit Seattle has extended its lead over Sanya Serenity Coast and Unicef in second and third place respectively. With less than 2000nM to go to Punta del Este the fleet continue to live life at a lean whilst racing hard upwind.

The leading teams have now crossed the finish line of the Elliot Brown Ocean Sprint but points will only be awarded to the top three teams with the shortest elapsed time once all teams have declared. This provides an excellent opportunity for teams towards the back of the fleet to pick up some extra points.

Skipper of Visit Seattle, Nikki Henderson said “Feeling proud of the crew today for all their hard work over the last approximately 30 hours for working together to make our trusty steed go as fast as they could - we saw some pretty good speeds. 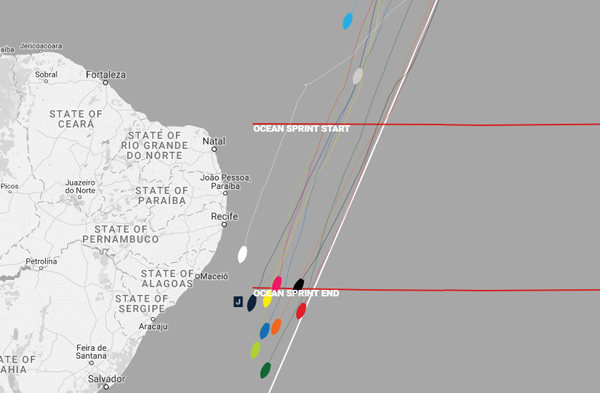 For HotelPlanner.com, currently in fourth, the crew are hoping that they have done enough in the Elliot Brown Ocean Sprint to gain some extra points. With Skipper Conall Morrison saying: “Our progress south remains as steady as the South East Trade Winds that push us. Tonight, I have been on deck very little as the team seem to have everything in hand, nearly all crew have been helming and the boat is in good shape.”

A small battle continues in the middle of the pack, GREAT Britain is holding onto fifth place, with PSP Logistics holding on to sixth position from Qingdao in seventh. PSP Logistics Skipper, Roy Taylor, said: “It continues to be a little squally down this coastline but with 2000nM to run spirits are still high and the prospect of gaining or losing a place is keeping the team focused, as is the thoughts of shore-side activities.” 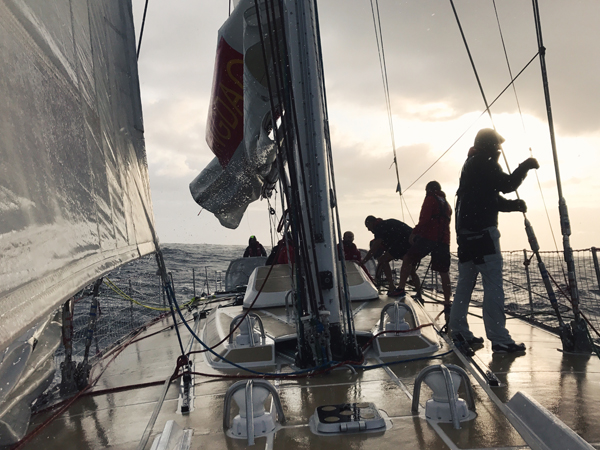 IMAGE: Qingdao crew dealing with a squall at dawn

With just 12nM separating eighth-placed Liverpool 2018 and ninth-placed Garmin both teams have seen wind strength increase and squally activity testing the skills of the crew. Garmin Skipper Gaetan Thomas said: “The conditions are a fine reach, with some waves coming from the side which roll the boat and means some effort is required for the drivers to hold the course and to anticipate it.

“From where we came, from the last levels of training and then the delivery to Liverpool, to now, the evolution is beautiful to watch, I am proud of my team.”

Dare To Lead in tenth continue to make good progress to the finish of the Elliot Brown Ocean Sprint, meanwhile, it was a momentous day for both Greenings and Nasdaq, in eleventh and twelfth respectively, as they crossed the equator. Rob Graham, Nasdaq Skipper, said: “We had a special moment for everyone yesterday, when Nasdaq crossed the equator at 30 13.6W, just as the sun was setting in a cloudless sky.”

Many of the teams after ticking off some of the main tactical and navigational challenges of Race 1 since leaving Liverpool including the Doldrums Corridor, Scoring Gate, Equator Crossing and now the Elliot Brown Ocean Sprint as they look forward to their arrival in Punta del Este.

In the meantime, Simon Rowell, the Clipper Race Meteorologist, reports that there is a continuing train of Trade Wind cumulus coming in and squalls are expected to continue. In addition, the Trade Winds look to be increasing over the next 24 hours so the Clipper Race Crew will need to be braced for more of the same hard upwind sailing conditions.

Following the medevac of Greenings’ Skipper David Hartshorn early in Race 1, we can today announce that Andy Woodruff will be taking over leadership of the team until David is given medical clearance to return.Andy Woodruff, from Poole, Dorset, has over 25 years of experience…

The two female skippers continue to dominate the leader board with the teams led by Nikki Henderson and Wendy Tuck in the top two positions as they begin the first Elliot Brown Ocean Sprint of the Clipper 2017-18 Race. Visit Seattle declared first,…