Today marks a third day at the top of the leader board for Visit Seattle, which is followed closely by Sanya Serenity Coast and Unicef in second and third place respectively as teams re-acclimatise to the angled upwind tropics sailing and look ahead to the first Elliot Brown Ocean Sprint.

Whilst Skipper Nikki Henderson’s focus remains on “sailing fast, trying to keep a good distance between us and the rest of the fleet”, the Visit Seattle crew did take the time to enjoy a visit from King Neptune. Celebrating their Equator crossing with a traditional ceremony involving fish gut stew, “22 more slimy Pollywogs were initiated and are now proud, dirty, Shellbacks!” 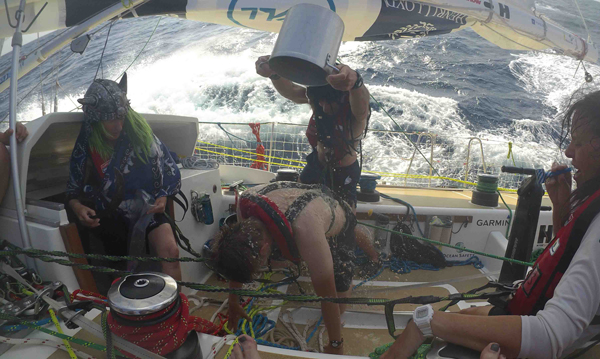 Visit Seattle has been awarded redress of 1 hour 46 minutes and 27 seconds by the Clipper Race Committee after it was instructed to carry out a boat-to-boat transfer with Unicef last week to enable the essential transfer of spares and stores. This will be applied at the end of the race, and with only 162 nM between those in the leading pack it is all still to play for.

On board Unicef there was much anticipation for the Equator crossing, an achievement that few people get to tick off the bucket list. Skipper Bob Beggs said: “A huge cheer sounding on deck as the latitude numbers on the GPS fell down to zero and then started climbing again as we crossed the now confirmed imaginary line.”

However Sanya Serenity Coast’s Skipper, Wendy Tuck, chose to hold off the “Equator crossing shenanigans” as her focus remains on improving helming and sailing in the upwind choppy conditions. She said: “Today was all about helming in a bit of a seaway which is trying to throw the boat all over the place. Speeds are good and we are getting used to living on the north face again.” 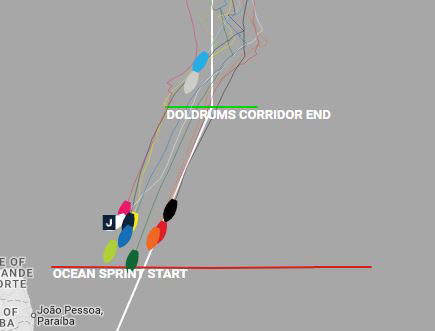 Moving up into fourth place after holding off strong competition from GREAT Britain and Qingdao, HotelPlanner.com has been embracing the speed of sailing upwind. Skipper, Conall Morrison, said: “The past 24 hours have seen a lot of miles under the keel of HotelPlanner.com - 232NM to put a figure on it.”

With the leaderboard back to changing every day, just 6nM separates GREAT Britain and Qingdao in fifth and sixth place. Andy Burns, Skipper of GREAT Britain, said: “Today saw us reach a real milestone, we crossed the Equator!” But it has not been all celebrations, adding: “Life on board continues to be tough for the crew, but they seem to be holding up...just about. We have had various issues today which have been frustrating, but not too much to slow us down we hope.”

Qingdao continues to battle for position with Skipper, Chris Kobusch, alluding to the conditions the fleet have been facing: “The past 24 hours had strong winds of over 30 knots to lighter winds of 14 knots, which meant plenty of headsail changes and reefs in and out. The crew is therefore pretty tired at the moment and we are hoping for more steady winds over the next day or two.”

Steady winds are not something Clipper Race meteorologist, Simon Rowell, can promise however. He reports that the choppy tropical upwind sailing will continue to be the theme for the next few days, with the Trade Winds gradually backing as the fleet heads further south.

PSP Logistics, in eighth place, is getting used to ‘life on a lean’ with Skipper, Roy Taylor, reporting that: “Crew [are] getting their fair share of foredeck showers now as headsail changes become more frequent.” Liverpool 2018 is currently in ninth place but Garmin Skipper Gaëtan Thomas, currently in tenth, says: “Every day we are coming closer, bit by bit. The race is far from finished!” 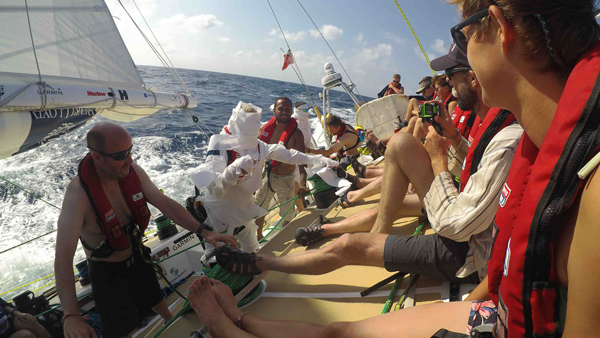 At the back of the fleet, Greenings and Nasdaq are working their way out of the Doldrums Corridor as both began racing under sail again. Greenings is focused on getting the best they can out of the weather with Relief Skipper, Dan Smith, reporting: “We aren't making the same speeds as the leaders but are going quicker than they were two days ago when they were in our position. We will keep getting what we can get out of the weather and hope it is kind to us.”

Similarly, Nasdaq has been putting in the sail changes to make their way out of the Doldrums Corridor and to get on a good southwest heading. Skipper Rob Graham, said: “So - sail changes, course changes, some frantic trimming and a bit of cursing and we eventually got back into some settled wind and have been trucking southwest well ever since.”

Dare To Lead is continuing on its plan to divert to the Brazilian island of Fernando de Noronha to disembark crew member Jerry Stokes, 54, in order for him to receive treatment for possible aspiration pneumonia. Best wishes have been sent from across the fleet and updates as they happen can be found on the Clipper Race website.