Three of the twelve teams, Visit Seattle, Unicef and GREAT Britain, are in Stealth Mode hiding their positions from the rest of the fleet. With this, the leader board currently has a very different feel, with Sanya Serenity Coast, Qingdao and PSP Logistics in the top three spots.

Visit Seattle’s position will show again from 1200 UTC; Unicef’s and GREAT Britain’s positions will be hidden until 0600 UTC tomorrow. We will have to wait until tomorrow to see what tactical choices were made by these teams, and whether those decisions have paid off. 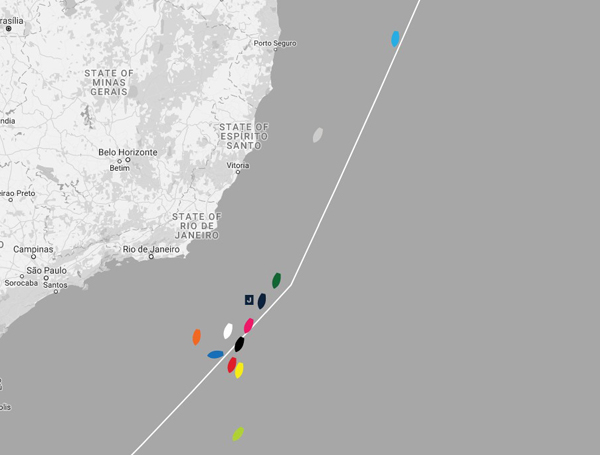 The yachts furthest south have had another day of downwind sailing but are aware of the tricky weather pattern ahead to navigate before their arrival into Punta del Este. Sanya Serenity Coast Skipper, Wendy Tuck, said: “We have less than 1000 nautical miles to Punta del Este via the Rhumb Line (shortest way) but in reality, we have to get an ugly gybe out of the way, the one when we head into the coast. Thrown into that will be the tactical decision of where to do it and try and stay in the light winds for the smallest amount of time.”

Qingdao came out of Stealth Mode at 0600 UTC this morning. It appears that the decision has paid off for Qingdao, maintaining its lead over PSP Logistics and moving in front of HotelPlanner.com, but it was still unable to shake off GREAT Britain. Skipper, Chris Kobusch, said: “We spent the last 24 hours in Stealth Mode, only to be seen by GREAT Britain, who are still close by and have been following us almost the entire race so far. Annoyingly we can’t pull away from them.”

HotelPlanner.com made the decision to gybe, inland, earlier than the rest of the leaders. In the short term this has cost it a couple of positions but, with the squally shifting wind ahead, will it succeed in the long run? Skipper, Conall Morrison, reports: “Today felt like a much better day than yesterday. I was disheartened after a few evolutions going wrong but, on reflection, buoyed up by how the crew rallied around to make the situation right again. We put a lot of prep into our hoist of the Code 2 mediumweight spinnaker at around 9am. Since then we have been averaging speeds in the 11 and 12 knot range. Spirits onboard are high and we look forward to the close sailing in the coming days.”

The result of the Elliot Brown Ocean Sprint was welcome news onboard Garmin. Skipper, Gaëtan Thomas, said: “It was good to know that we finished third in the Elliot Brown Ocean Sprint, so close behind Greenings and Visit Seattle. It did help my crew to realise how the little details can make the difference, especially with a race with the same boats; the sailors make the difference!”

He added: “Now we are looking to see how the weather will be in a few hundred miles as an unstable low is developing and a mix of some wind holes and some nasty fronts with a lot of destroying winds might happen. Some boats start to be on stealth mode, playing the last tricks. Very interesting!”

Storming along the inside line, Dare To Lead has overtaken Liverpool 2018 and is hot on the stern of Garmin. It was a long night for Skipper, Dale Smyth, but with the crew’s hard work, it is now constantly holding boat speeds of 12 knots and peaked at 19.2.

For Greenings, victory in the Elliot Brown Ocean Sprint was hard earned. Relief Skipper and Deputy Race Director, Dan Smith, said: “[It was] what we needed after some tough sailing in an area away from the others, where it is harder to judge performance and motivate ourselves. The team now understand and have seen a reward from eating, sleeping and breathing on the high side, steering straight and helming well.”

He remains focused on the task in hand, adding: “The weather in front is going to make finishing very hard work for the Skippers. We just need to hope that there is a way that we can pick our way through it and that the leading boats get slowed a little meaning that we can make our hours of redress count.”

Nasdaq had a better run yesterday, helped by wind and sea conditions that are gradually becoming more favourable but Skipper, Rob Graham, reports: “We are still waiting for the spinnaker conditions the boats further south are reporting, but sense that it can't be far off now.”

The weather ahead is not going to be all champagne sailing. Just off the coast, where the fleet has to pass through before turning into Punta del Este, is looking very messy, with lots of gaps and holes between two low pressure circulations. Simon Rowell, Clipper Race Meteorologist, reports that the front creeping north is still quite active, with lots of upward vertical moisture movement. Generally, what goes up eventually goes down, so strong squalls and occasional heavy rain awaits the most southerly teams.

After thousands of nautical miles sailed across the Atlantic Ocean, Visit Seattle, Sanya Serenity Coast and…