After a nail-biting race finish for the Clipper Race teams (and Race Viewer addicts), Dare To Lead has won Race 10, after its brave tactics paid off. In the last 24 hours of the Garmin American Challenge from Seattle to Panama, Skipper Dale Smyth and his crew broke free of the main pack who were hugging the Mexican coastline. Their daring decision to remain west led them to victory after crossing the finish line at 10:59 UTC.

There was a hard-fought race for the final two positions on the podium with Visit Seattle scooping second and GREAT Britain third. Despite 18 days of racing, covering a distance of 3,000nm, only an hour separated these two teams.

The original race finish line for Race 10 was planned to be due south of Isla Jicaron in Panama. However, a windless zone was expected further along the race course and therefore the Clipper Race Committee informed teams yesterday that Mandatory Gate 2 would now signal race end.

On Dare To Lead’s maiden win, Skipper Dale Smyth, has spoken about how his team did not let up despite taking a substantial lead in the final hours of the race. He says: “We kept sailing and milking every little bit of boat speed we could muster in the 6 knots of wind and eventually crossed the line with 33 miles in the bag.”

He has also praised each Skipper “who has fought really hard and kept it interesting right to the end.”

It was a tense race for second place Skipper, Nikki Henderson and Visit Seattle who did not let up the pressure after leaving their home city, not dropping out of the top three during Race 10. Henderson has reflected on the challenging conditions they have experienced. She says: “What a finish! The last 24 hours have been such tight racing - and so tense.

After one of the most thrilling finishes of the Clipper 2017-18 Race so far, ten teams have now crossed the finish line, with just Liverpool 2018 left to complete Race 10. Lance Shepherd, Skipper of Liverpool 2018, reports: “Well today we have had some great sailing, particularly this afternoon, trucking on at over 9 knots at times under Code 1. Just as the light has started to fade so has the wind. We are now doing 4.5 knots in the direction of Bowley Gate and the finish line.

“We will be there as soon as we can. I think we have just re-written the book on being fashionably late.” 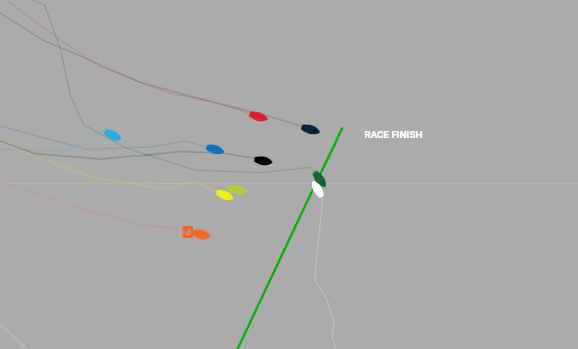 After completing this race, the teams will buddy up and alternatively tow each other to conserve fuel as they motor sail towards a scheduled re-fuel stop in Costa Rica. They will then continue on to Flamenco Island Marina on the Pacific Ocean side of the Panama Canal. After traversing the Panama Canal – one of the real highlights of the 40,000nm circumnavigation – the teams will regroup for Race 11 to New York which will start on Sunday 3 June.

To find out what the last day of racing meant to the teams, take a look at the latest Skipper Blogs and Crew Diaries.