Heavy fog is making visibility tough for the Clipper Race teams in the middle of the North Atlantic, but the racing remains close as the majority of the teams continue to hug the Northerly Ice Limit on Day 5 of Race 12 to Derry-Londonderry.

Garmin remains in the lead for a fourth consecutive day but has teams hot on its stern. Keeping up the intensity on board, Skipper Gaetan Thomas reports: “In the afternoon the first south group came back towards us and now we have Unicef chasing us followed in by Hotelplanner.com, Dare To Lead, and Sanya Serenity Coast - no pressure!

“The team is working on trimming and are trying their best to keep us ahead. In a day maximum, a big wind transition should happen and we'll see how things will turn!”

For Bob Beggs, Skipper of the second placed Unicef, this is histwentieth Transatlantic crossing and as a result, he is only too aware of how the changing conditions ahead could affect the leaderboard. He says: “Soon the first real change with the inevitable mixing of positions is about to descend to test the fleet. An area of light pressure, followed some shifty winds which will keep us on our toes!” 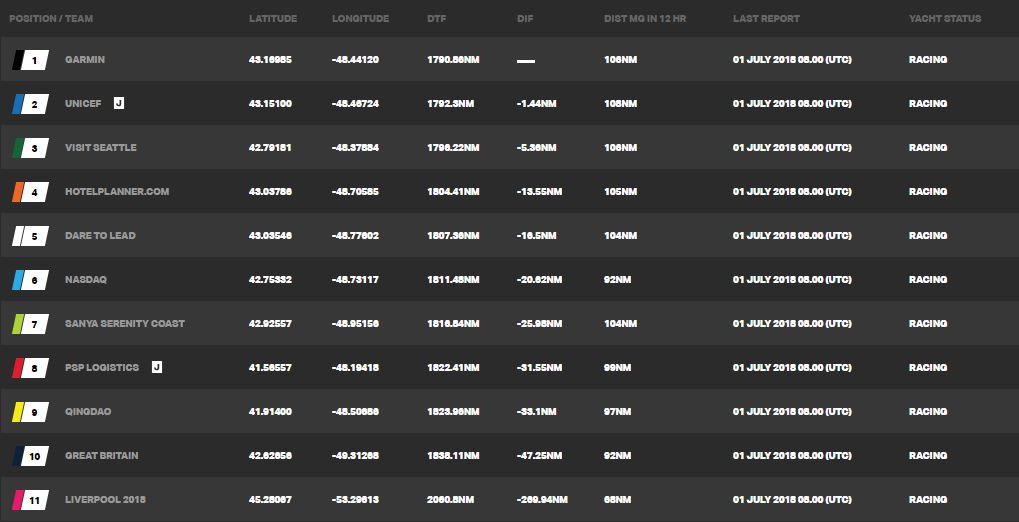 Despite the poor visibility, the close proximity of the teams means that races within the race are taking place throughout the fleet. Visit Seattle has moved into third after chasing down Nasdaq, whose Skipper Rob Graham reports: “Visit Seattle passed us when the wind shifted and they were able to sail slightly higher and faster than us. Now we're chasing them but it's so foggy we don't have their stern to follow!”

Time is still to tell if Qingdao’s and PSP Logistics’ decision to take a more southerly route will pay off. Both teams have found the effects of the Gulf Stream to be weaker than first hoped, but with conditions remaining good, PSP Logistics Skipper Matt Mitchell hopes the southerly tactic pay dividends when the time comes to eventually turn north: “For us at least, the spinnakers haven't been out yet. I'm sure in a day or two as the wind shifts more southerly and our strategy takes us north that they'll be flying in earnest.

“We've been very lucky with the weather so far, almost perfect conditions for an Atlantic crossing. This being my seventeenth, I've seen it in all its moods!”

According to Clipper Race Meteorologist Simon Rowell, the visibility isn’t going to improve for a while, as the relatively warm airflow continues over the much colder water. He reports: “The front is almost stationary now, and in around 36-48 hours, the teams will be negotiating that knuckle of high pressure around the end of the Ice Limit. After that goes through, the next low should pick up again.” 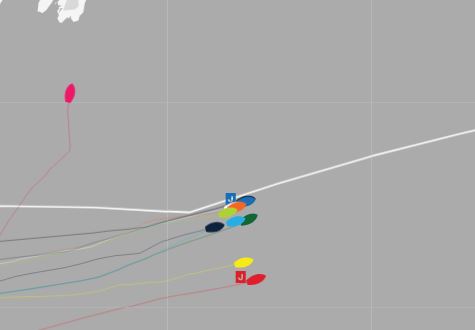 Well wishes for Liverpool 2018 have been shared across the fleet as the team heads north on diversion to Newfoundland, Canada, for the medevac of a crew member on board. GREAT Britain Skipper Dave Hartshorn says: “Our thoughts are with the crew of Liverpool 2018, wishing them a safe and speedy passage to St John's and subsequently crossing to Derry-Londonderry. Take care and stay safe.”

With three days and hundreds of nautical miles already under their belts in Race 12: The LegenDerry Race, conditions out on the North Atlantic have picked up, bringing the gentle introduction to Leg 8 to an end as teams begin to reap the rewards of…

There’s been plenty of movement on the leaderboard, but none of the Clipper Race teams have broken away amid the…