As the close racing continues in the Southern Ocean, the leaderboard positions continue to change with Qingdao retaking the lead on day seven of the The ClipperTelemed+ Tasman Test. With less than 20 nautical miles separating the top three teams, the next 24 hours are set to be just as thrilling as the fleet converges on the race mark at the south of Tasmania before heading north to Sydney.

On Day 7, it is Qingdao which takes the lead but on board the team is highly aware of how close the racing is with Skipper Chris Kobusch reporting: “Since the team sailed into first position everyone is keen to stay there and every time I come on deck, or someone comes to the nav station, the first question is: where is Sanya Serenity Coast? How far are they away?

“It is really exciting racing with all the boats so close together. It is still a long way to go and the slightest mistake can cost you a position or more.”

Currently in second place, Sanya Serenity Coast has been enjoying the fast and furious downwind sailing conditions. Skipper Wendy Tuck said: “We came down south and its windy and fun. This breeze will start easing over the next 24 hours so we are making the most of the surfing, everyone is getting a go on the wheel of fortune and lots of new top speeds are happening.” 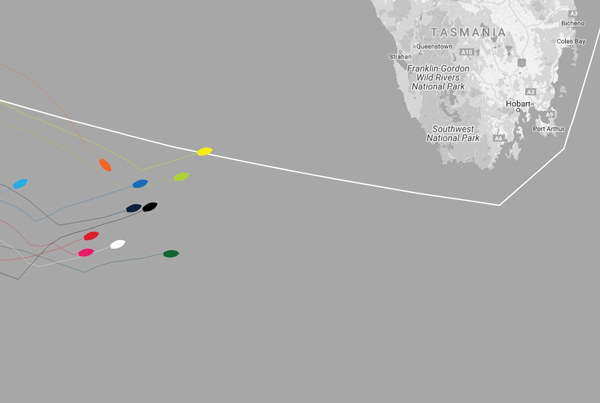 Visit Seattle, currently in third having opted for the most southerly route of the podium teams, is already looking ahead to Sydney. But with the race mark to the south of Tasmania signalling that time in the Southern Ocean is nearly over, Skipper Nikki Henderson reflects: “So, the exciting news though is that we ARE nearly at the south of Tasmania. Around a day or so and we will be turning left and turning north. It's so crazy to think that this is the last Southern Ocean sailing we will be doing. Even stranger to think we will be heading north! “

On board fourth placed Garmin, Skipper Gaetan Thomas is also thinking about the tactics of rounding the southerly mark and the remaining decisions to be made as they route heads north to Sydney saying: “Zigzagging towards Tasmania for our next waypoint called ‘Mitchell’ were things tactically will be very interesting, lots of currents, an option for scoring gate and some light winds to avoid.”

Positions are tight and continue to vary with Unicef slipping to fifth place with GREAT Britain, which moved into sixth, closely crossing its path. Unicef Skipper Bob Beggs said: “The race tempo is exciting with all the yachts cross-tacking each other, one such meeting was with GREAT Britain a couple of hours ago it was good to talk with skipper Andy although he wasn't keen to share his tactics with me as he headed south trying to reach waypoint Michell south of Tasmania before me.”

“We hoisted our spinnaker this morning as we are having a little tussle with Liverpool 2018 and had a couple of fast hours. We eventually ran out of space with our ice limit of 45 degrees south and had to gybe north once more.”

PSP Logistics has also been enjoying the fast spinnaker sailing conditions benefiting from a wind shift which, for skipper Matt Mitchell, came as a relief as it meant that PSP Logistics could now point exactly where he wants to go: “We continue to chip away the miles to the guys ahead and we are starting to make good gains...finally!

“With just over 24 hours to the corner it really feels like the fleet has bunched up again meaning it's still wide open for the section up to Sydney.”

After a tough night with strong gusting winds, Hotelplanner.com choose a more northerly route to avoid some of the strongest winds but in turn sacrificed some leaderboard positions slipping from sixth to eighth place. However, Skipper Conall Morrison is hopeful that the team today will have good conditions and nice speeds back under spinnaker.

For Nasdaq, currently in eleventh place, thoughts have also turned to Tasmania after reaching the milestone of around 1000 nautical miles to go until Sydney.

Simon Rowell, Clipper Race Meteorologist and weather guru, reports that as fleet converges to Tasmania, the conditions are looking good to get around quickly. He added that it is looking very tactical from there on in with what looks to be a very close upwind finish in Sydney.

Who will round the mark first? To keep up to date on the latest positions check out the Clipper Race Viewer with hourly updates.

The first episode of the Clipper 2017-18 Race's official documentary series, Race of Their Lives 3, is airing tonight, Sunday and Monday on Sky Sports Arena in the UK. Click here for all episode timings.

The Elliot Brown Ocean Sprint is in full swing on day 5 of Race 4: The ClipperTelemed+ Tasman Test, and the racing remains as close as ever.Qingdao has continued its incredible rise in the rankings, with the team now in the lead, despite sitting in…

After beating upwind to the south, the Clipper Race fleet is now heading eastwards towards the Great Australian Bight and…