After the Clipper Race fleet split into two packs, it has converged again over the last 24 hours as teams tackled stormy conditions, known locally as Southerly Busters, ahead of the Elliot Brown Ocean Sprint.

During the fifth day of racing, it is Visit Seattle that takes the lead as it ploughs through the miles during the Ocean Sprint.

Although this could change when yesterday’s leader Sanya Serenity Coast returns to the Clipper Race Viewer from being in Stealth Mode at 12:00 UTC today. Only time will tell where the team places but it is likely, however, that racing remains close between the two teams with Sanya Serenity Coast Skipper Wendy Tuck reporting: “We are now sailing along nicely and although we are in Stealth Mode a few other boats can see us and Ican’t turn off our AIS as we are in a busy shipping area.”

In second place, Liverpool 2018 is fully focused on completing the Elliot Brown Ocean Sprint with Qingdao, which entered Stealth Mode at 06:00UTC, freezing its position on the Clipper Race Viewer until tomorrow morning. 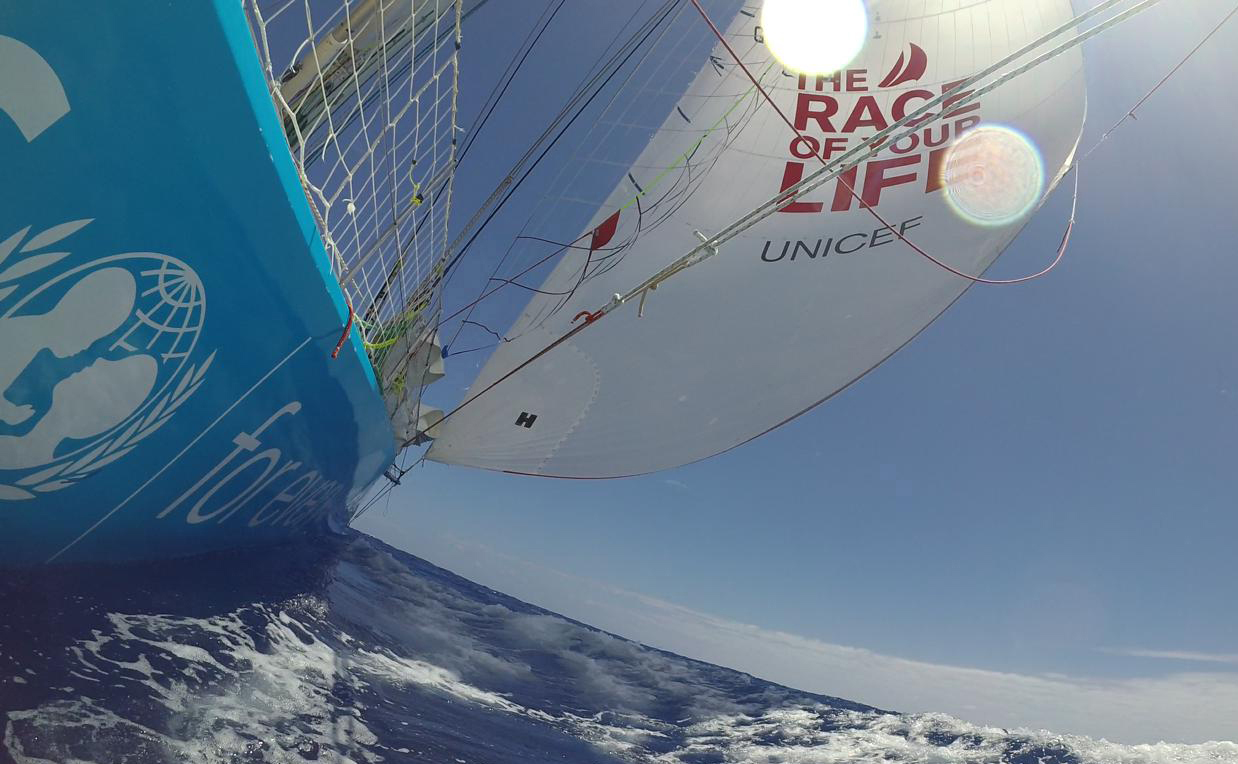 Photo: Racing on board Unicef during the Wondrous Whitsundays Race

Dare To Lead has been quietly working its way up the leaderboard from ninth place on Day 3 to fourth position. As the team builds up to begin the Elliot Brown Ocean Sprint, Skipper Dale Smyth reflects on the stormy conditions faced by the fleet earlier in the day: “We were sailing upwind in the North Easterly wind with a lot of amazing lightning going on, when one of my crew remarked "wow it looks like there is a storm further inshore, I hope the fleet is ok".

“Within seconds the wind jumped from 17 knots from the North East to 55 knots from the South West and rain like I have never seen!! It literally took your breath away!

“I managed to turn the boat downwind without crash gybing and do a very efficient Yankee 1 drop due to the sterling efforts of some brave foredeck crew who went forward in the stormy conditions.”

PSP Logistics, Skippered by Matt Mitchell, has also done well to make up ground on the fleet as the team takes fifth place today. Matt explains: “Life is infinitely more pleasant today as we are making good speed under spinnaker with a lovely warm day and bright sunshine.

“We certainly have had to pay for this though as the last few days have been tough going, culminating in a spectacular lightning storm last night.”

Towards the back of the fleet, HotelPlanner.com, GREAT Britain and Nasdaq are grouped closely together in seventh, eighth and ninth place respectively. Each of the teams also reported high wind speeds and fascinating electrical storms of the Southerly Buster and are now heading for the Elliott Brown Ocean Sprint. Speaking from on board this morning, Nasdaq Skipper Rob Graham says: “We were hit by a weather front last night - an instantaneous jump in wind speed and direction left Nasdaq with its deck near-vertical.”

And after breaking away from its nearest competition overnight, Rob adds: “I see GREAT Britain has just popped back onto our AIS screen - approximately ten miles away again! Good to have you back guys.”

The Elliott Brown Ocean Sprint results will only be confirmed once the final team has completed the sprint but with teams in Stealth Mode, and positions very much up for grabs, there is likely to be some interesting changes to the leaderboard before teams cross the finish line in Airlie Beach. PSP Logistics Skipper Matt Mitchell explains: “We now have at least 24 hours of downwind sailing before the next obstacle gets in our path by way of a high-pressure system stretching right across the race track.

“We are hoping that this will bunch the fleet up for the final few hundred miles into Airlie Beach.”

Keep up to date with how the changeable weather conditions affect the fleet as it completes the Elliott Brown Ocean Sprint via the Clipper Race Viewer and hear more from the Skippers and crew on the Team Pages.