Although Race 7: The Forever Tropical Paradise Race may only be in its opening hours, Dare To Lead has managed to pull away and currently has a two nautical mile advantage on the pack which, after the first Le Mans start of the 2017-18 edition, remains tightly compacted.

Whilst the Dare To Lead team settles in as it gears up for the first long race since Race 3 from Cape Town, South Africa, to Fremantle, Australia, speaking from on board, Skipper Dale Smyth said: “Today, the temperature is soaring and we did our start at 04:00 UTC. We got a clean break and a little bit of space ahead of the fleet, long may it last.” 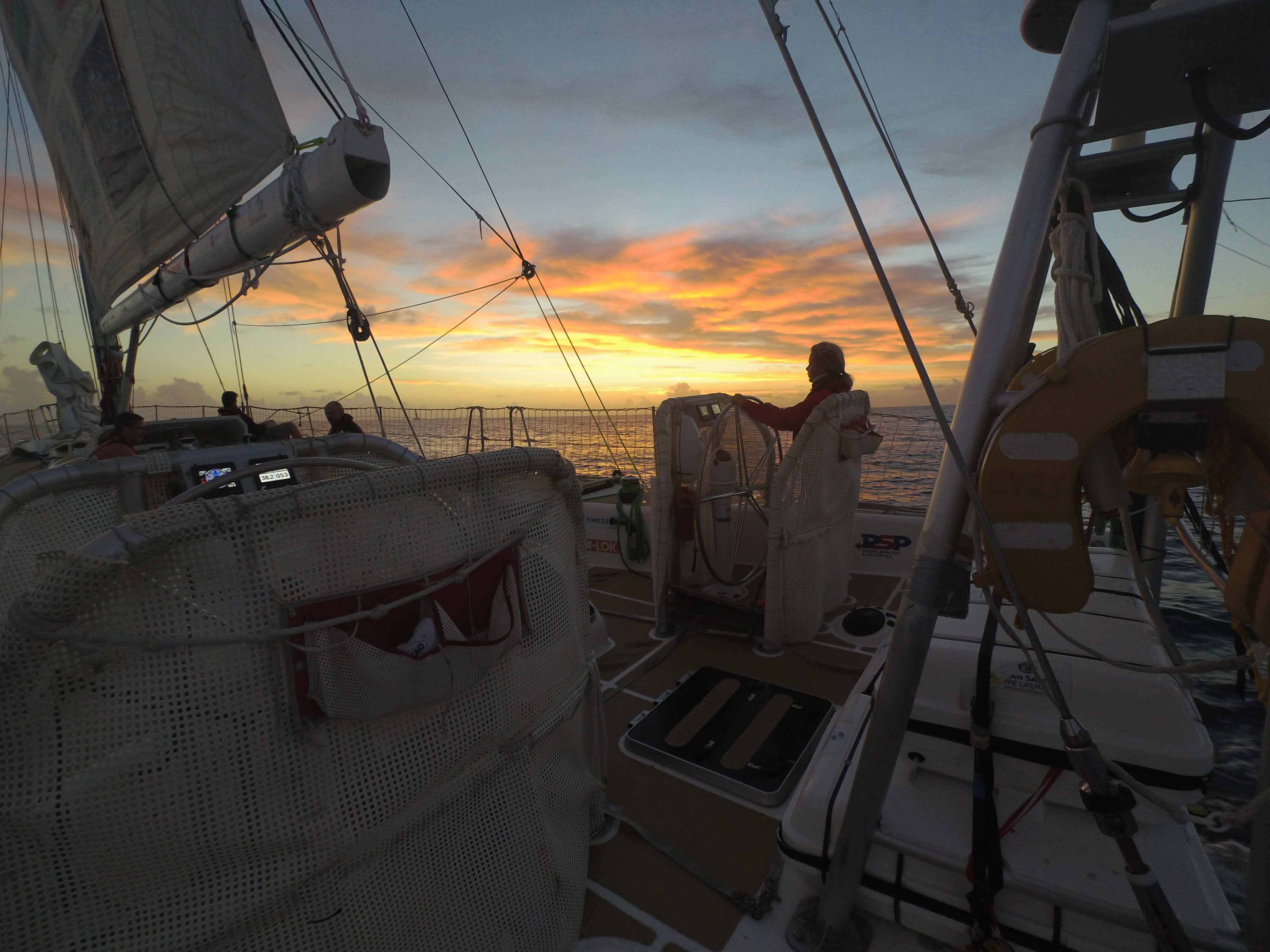 After its podium result for Race 6, PSP Logistics is looking to continue its successes and has managed to push slightly ahead of the majority of the fleet alongside Sanya Serenity Coast as the two teams jostle for second and third place.

Matt Mitchell, Skipper of PSP Logistics comments on the start of Race 7: “It was a clean start and the guys did a great job in getting our sails set, followed by a text book spinnaker hoist once the ten minutes that we have to maintain the set course and sail plan was up.

“The wind is fairly light now and due to decrease so it will be a little bit of a light wind lottery, although the weather forecast has the wind filling in again over the next 24 hours.”

Image: Dare To Lead holds its two nautical mile advantage of on the fleet today

After initially leading the fleet following the Le Mans start, Unicef has slipped down to fourth during the opening hours of the race. With light winds to contend with, the rest of the fleet remains almost neck-and-neck and whilst positions are likely to change regularly over the coming 24 hours, it is Visit Seattle, the most northerly of the pack, that claims fifth place.

Reflecting on the Airlie Beach Stopover, and all of the adventures that still await, Visit Seattle Skipper Nikki Henderson says: “Now we bid farewell to Australia, which has been our home for over two months now. It feels bitter sweet, it's become familiar and feels settled to be here.

“And yet, now over half way in the race it's time to head home - first of all back over the equator to the Northern Hemisphere and to China. I'm sure both Sanya and Qingdao will be a fascinating experience for everyone. Soon Seattle - our home port and then back into the Atlantic - back into home turf - NYC, Northern Ireland - and Liverpool. Quite an exciting six months awaits!”

GREAT Britain, now under the lead of Skipper Dave Hartshorn is right in the middle of the pack currently sixth but is closely followed by Nasdaq in seventh, however, Skipper Rob Graham is holding back from any big tactical moves just yet, explaining: “With a virtual mark ‘Light’ to round before entering the Doldrums Corridor, we're not expecting any big tactical decisions yet - only helming and trimming will make the difference and we might remain close together as a fleet.”

Towards the back of the fleet, but only separated from frontrunner Dare To Lead by 2.9nm, Qingdao takes tenth place and Garmin is in eleventh.

With some 4,100 nautical miles ahead of them, and such close racing out of the blocks, there is likely to be a significant amount of change on the leaderbaoard as teams re-adjust to life back at sea after the shorter races of Leg 4.

Whilst the fleet settles in for the long-haul, Clipper Race Meteorologist Simon Rowell explains that the light conditions that are currently challenging the fleet should remain for the rest of the day but looking ahead, the fleet is likely to encounter some squally conditions over the next 26-48 hours, and should expect to see wind speeds in the 40 knots bracket.

Keep up to date with how the changeable weather conditions affect the fleet and leaderboard via the Clipper Race Viewer and hear more from the Skippers and crew on the Team Pages.

Race 7: The Forever Tropical Paradise Race will finish in Sanya Serenity Marina in Sanya, and the fleet is expected to arrive between 21 – 25 February after roughly 23-27 days at sea.

The Whitsundays was picture-perfect today for the Clipper Race fleet’s departure, with its blue skies, azure waters and steady winds providing the ideal scene as it bid farewell and headed off for the Le Mans start for Race 7: The Forever Tropical Paradise Race to…

The Clipper Race Skippers are relaxed and well rested after a break in the Whitsundays but it’s time to get back to work, and start Race 7: The Forever Tropical Paradise Race to Sanya.Despite many thinking that Sanya Serenity Coast would play its Joker Card…

The All-Australian Leg 4 has been full of close finishes and competitive racing, and has also resulted in back to…