There was a double celebration at the Prize Giving Ceremony in Abell Point Marina, the first global 5 Gold Anchor accredited marina in the world, as the awards for both Race 5, from Sydney to Hobart, and Race 6: The Wondrous Whitsundays Race were presented in its beautiful outdoor setting.

After being on the pontoons to see the teams arrive over the previous 24 hours, Al Grundy, Chairman Tourism Whitsunday and Councillor Jan Clifford, Whitsunday Regional Council, got the evening started by officially welcoming the entire Clipper Race fleet and its supporters to the region.

Al Grundy told the crowd: “It’s no easy thing sailing yachts half way round the world, let alone the last leg from Hobart so congratulations to you all. I’m an ocean racer so I know what you’ve been through and it takes guts, it takes determination and great camaraderie.

“It’s been two years since the last time the Clipper Race came here and I tell you it’s so exciting to have you back and I want to get a syndicate together next time and have a Whitsundays crew. We’ve got a great region, it’s a sailing wonderland out here.”

Divided into two halves, Race 5 awards were the first to be announced, getting started with the Unicef Charity Champion for the All-Australian Leg 4, which went to GREAT Britain’s Gareth Blanks for being instrumental in motivating his team to reach its £30,000 fundraising target. Gareth was not in Airlie Beach to accept the award in person so Skipper Andy Burns accepted it on his behalf.

After online public voting, the Henri Lloyd Photo Competition Award which covered Race 5 and 6 was awarded to Marek Omilian from Visit Seattle for his shot taken from the sail locker.

Hotelplanner.com was awarded the Stormhoek Social Spirit Award for Race 5. Explaining the decision, Bernard Fontannaz, owner of Stormhoek Wines, said: “This team have won, as the crew showed true sportsmanship by proving to us that you can race well and take time to help others along the way. This is the spirit of Stormhoek: to change the world along the way.” 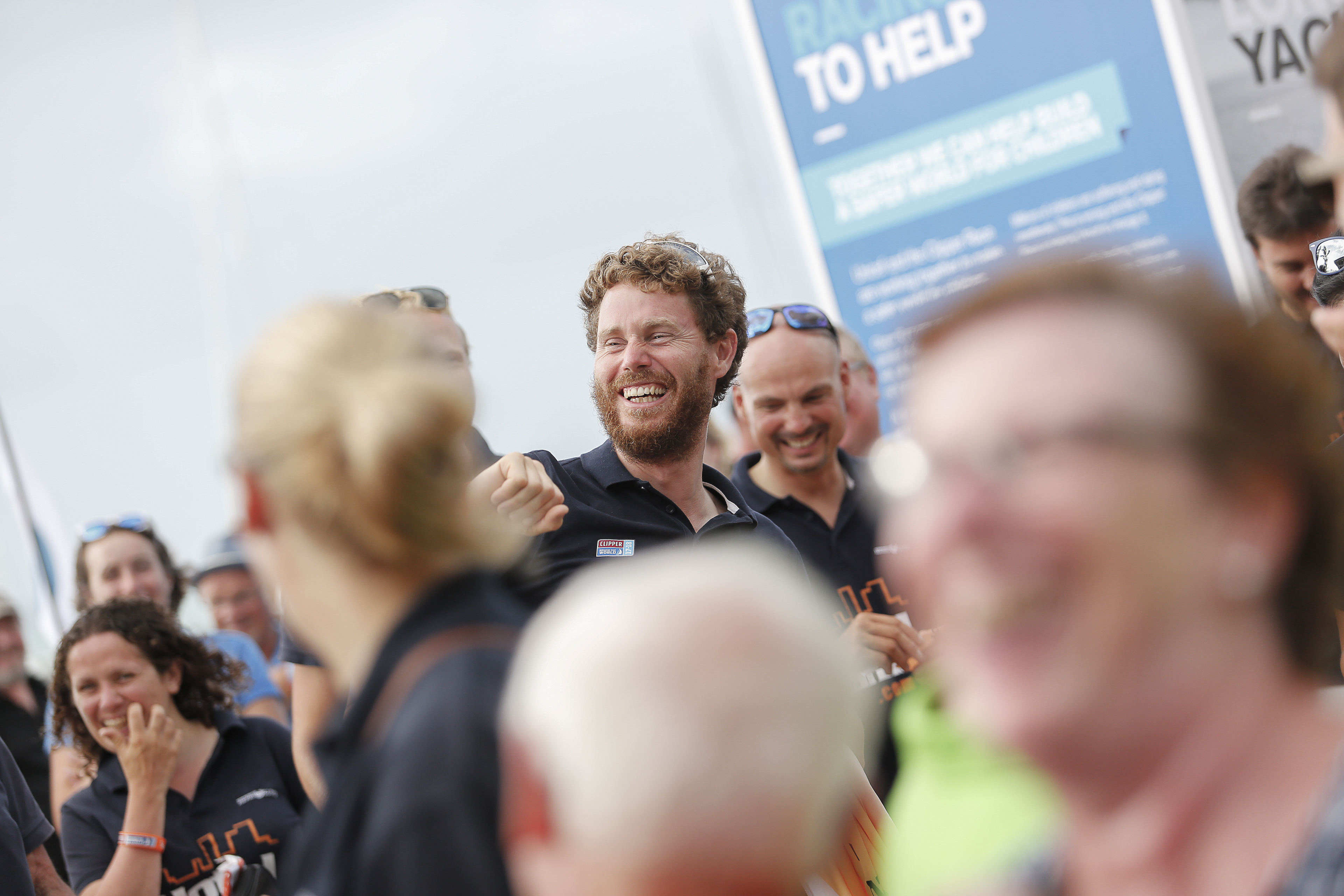 Next it was time for the podium teams to be celebrated. Luke McCall, Manager of Abell Point Marina, presented the Garmin team with its 3rd place pennant for the Sydney to Hobart Race 5. The team’s second podium result, Garmin finished less than three minutes behind Sanya Serenity Coast after leading for most of the approach towards Tasman Island, though was closed down rounding Cape Raoul.

Jan Clifford then presented the Sanya Serenity Coast team with its second place pennant. The team took line honours in the race, putting it on the podium for the second consecutive time in the All-Australian Leg 4.

It was Hotelplanner.com’s opportunity to join together and receive their first winner’s pennant. The team was awarded with its first race win when it received redress from the Sydney Hobart Yacht Race Committee after rescuing a man overboard from another yacht on the opening day of Race 5.

As is traditional at the end of a Leg, all departing crew were invited to join together on stage to be given a round of applause for their achievements and after a short break in the sunshine, with a BBQ getting underway, it was time for the second round of the Prize Giving, in celebration of The Wondrous Whitsundays Race 6.

First off, the Elliott Brown Ocean Sprint results were recapped. More a marathon than a sprint, it was still incredibly intensely fought as only 12 minutes separated the top two teams after just over two days racing. The results were; 1 – Unicef (3 bonus points), 2 – PSP Logistics (2 points) and 3 – GREAT Britain (1 point).

The Stormhoek Social Spirit Award for Race 6 was awarded to Visit Seattle after it was nominated by its supporters for its strong team spirit and for being positive in every situation, not just across this race but every race.

On to the most recent race results and Liverpool 2018 was called upon to be presented with its inaugural podium result. After coming out of Stealth Mode in the lead position on Day 9, the team jostled for the lead until a ‘kitemare’ spinnaker drop meant they lost positions in the final 24 hours.

Richard ‘Pretty Ricky’ Peters, a Property Developer doing Legs 4, 5 and 8 on Liverpool 2018, who celebrated his 50th birthday during the race, said: “I think it is just what the team needed. We had felt frustrated all the way along the line and suddenly we have got a podium. Quite far into the race we lost two spinnakers and we still made it. We went from first to fourth and we felt very sorry for Sanya Serenity Coast but we will take the third place. The team is ever so happy.”

Its third time on the podium, PSP Logistics worked hard to claw back up the leaderboard after taking the most easterly route of the fleet, adding miles to the journey which saw them in eleventh place at one stage.

Round the worlder Nigel Holcombe, 55, on board PSP Logistics said: “It feels fantastic, honestly, we feel really, really excited. We were going for the win because as a team we’ve now got to that stage where head to head we know we can sail as well as any other boats, but we really couldn’t touch Visit Seattle in this instance. They raced brilliantly and fully deserved the victory.”

He added: “At crew allocation we looked around at each other and we didn’t really think we would be a competitive boat. We thought we’d enjoy each other’s company, but unbelievably and perhaps a little surprisingly to ourselves we’ve become a really good sailing boat, and we’re now at the stage that we are striving for an overall podium finish. It’s a very proud to see how far we’ve come together.”

The biggest cheer of the night however was saved for Race 6 winners Visit Seattle, which celebrated its first race win by 25 minutes after eleven days racing through some of the most varied conditions of any leg so far.

Leg 2, 4, 7 and 8 Visit Seattle crew member Guylaine Chapdelaine, 52, a maths teacher from France said: “It’s an amazing feeling to come first. In the last few hours when we saw the other boats behind us, just 5 nautical miles back, we pushed really hard and I’m so fortunate Nikki gave me the helm to finish the race. It was a big gift for me and I’m really proud and thankful for Nikki for doing that.”

The recent race results mean that after racing almost 20,000 nautical miles (nm), approximately the half way point in the Clipper 2017-18 Race, it is still Sanya Serenity Coast which leads the overall standings, just ahead of Qingdao.

The arrival of the fleet may mark the end of the Wondrous Whitsundays Race 6 but it signals the start of the Whitsundays Clipper Race Carnival, and its specially arranged calendar of events for the crew, supporters and the local community to join together and enjoy some unique events.

The Whitsundays Clipper Race Carnivalwill include a long table lunch on the pure white silica sands of Whitehaven Beach, regularly voted as Australia’s most beautiful beach, a progressive regional lunch, rodeo in Bowen, and a welcome street party on the foreshore of Airlie Beach. For more information or for bookings, see the Whitsundays Clipper Race Carnival Website.

The Clipper Race Committee is announcing that CV27, Sanya Serenity Coast, has been given a six-hour time penalty as a result of breaching part of the Clipper Race Course Instructions for Race 6: The Wondrous Whitsundays Race.Following on from the grounding incident involving…