Skippers are reporting relief today as winds and boat speeds have picked up, though with the high level of fishing fleets around, teams are on high alert in this opening stage of Race 8: The Sailing City Qingdao Cup.

PSP Logistics leads the push north this morning but Sanya Serenity Coast, positioned furthest east in the fleet and closest to its Qingdao destination, is in first place this morning, with Liverpool 2018 in second.

Skipper Matt Mitchell on board PSP Logistics, in third place, reports: “Another day goes by and it's actually been quite pleasant with a light headwind and warm sun. The breeze is starting to pick up now though and life is definitely on the lean again!”

His team got caught up briefly in a big fishing net overnight, but Matt went on to warn his fellow Skippers to stay vigilant of the hazards and most Skippers today are reporting added alert and avoidance methods in order to stay out of the way of the largest fishing fleet in the world, wherever possible.

Visit Seattle is in fourth place, with GREAT Britain in fifth, with a more positive report from Skipper Nikki Henderson today, as she says: “The wind finally came - with PSP Logistics and Sanya Serenity Coast reappearing on the AIS which was a boost for the crew.

“We are now sailing upwind in a smooth sea and bright sunshine - both things that I expect won't last for long, so we are soaking it in and enjoying the day. Liverpool 2018 is just ahead of us and sailing very well. Unfortunately, we don't seem to be able to quite keep up with them but we are definitely trying our best!” 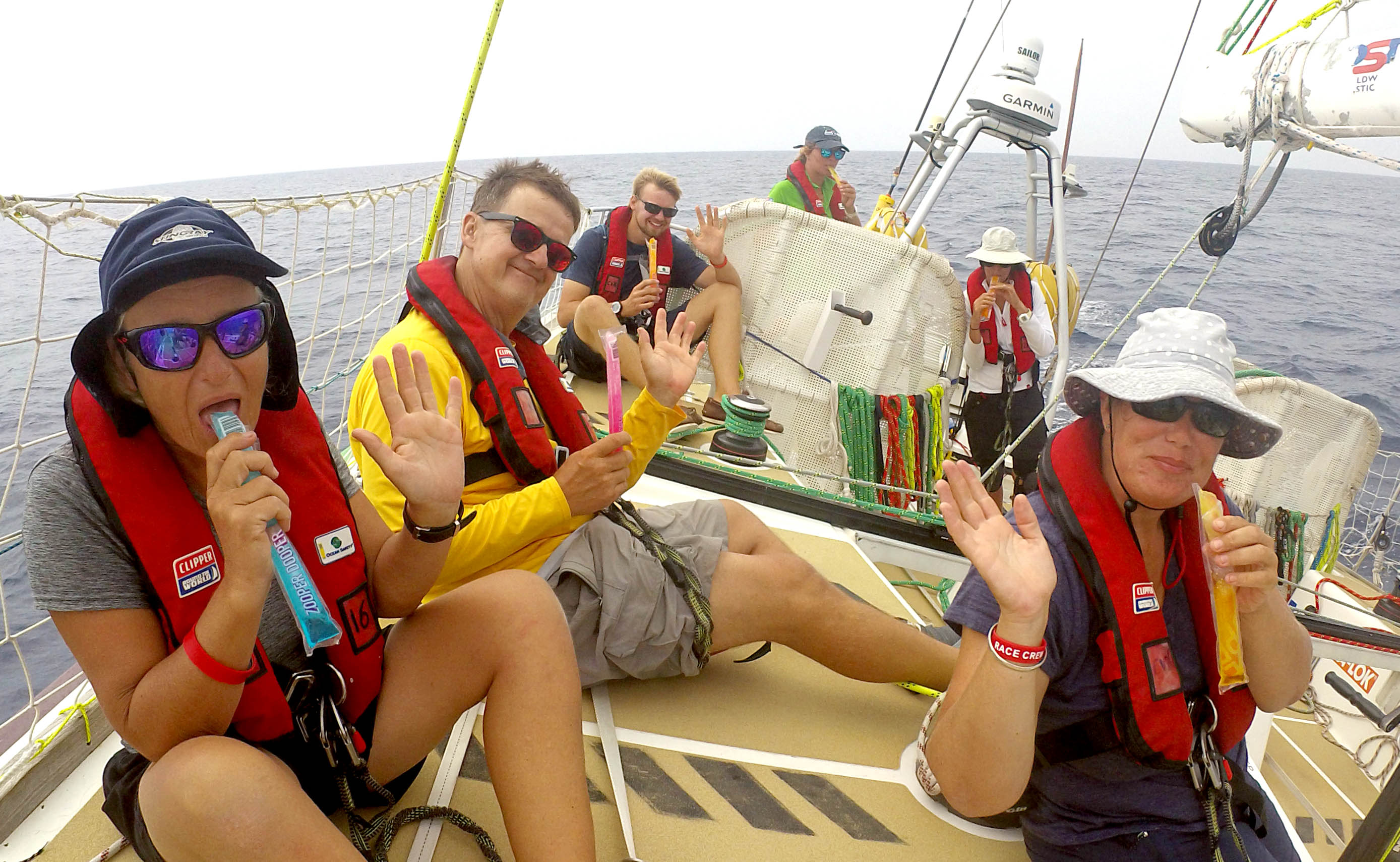 IMAGE: Some of the Visit Seattle crew enjoying the sunshine (for now).

Unicef is in sixth place today despite being one of the most northerly positioned teams as it is one of the furthest west. Skipper Bob Beggs reports: “The last 24 hours have been idyllic, flat seas, sunny, with just 10 knots of wind. The spinnaker run came to an end overnight as the wind started to back easterly and head the fleet. We now have perfect Yankee 1 conditions, with a gentle 25 degrees angle of heel.”

Bob then added: “Some evasive action was taken during the night to avoid a ten-mile-long fishing net. Skipper Matt Mitchell on PSP Logistics called up on VHF radio to warn the fleet behind him (unfortunately all of us) of the danger, as the team was caught up in it. They were however able to free themselves from the net with little effect on their lead. Matt is no stranger to these waters, it’s his third race to Qingdao and he knows a trick or too when escaping these massive nets. Thanks for the warning Matt.”

Dare To Lead, in the centre of the fleet is seventh, with Hotelplanner.com and Garmin, both neck and neck in line with each other, in eighth and ninth place respectively.

On Garmin, Skipper Gaëtan Thomas reports today that his team are feeling frustrated in seemingly lighter winds, doing all they can to increase boat speed. He reports: “The pirates (Garmin crew) are trimming and trying different things to see if our speed will increase but we are still going slower than all the fleet. We checked if our keel and rudders are trawling some nets which would explain our lack of speed, but it is all clear down there.

“The race is just at its beginning though so we will keep sailing and see the result later but for the moment, it's all in the same direction, same wind, same angle, so we will find out why we are so slow ...hopefully!”

At the back of the fleet, a boat to boat transfer took place this morning, as Qingdao Skipper Chris Kobusch, in tenth, explains: “This morning we finished our first fresh water tank, wanted to start the watermaker and discovered that the bleed screw on the pump was missing. Without it the water maker can’t build up the required pressure and therefore we would not be able to make any fresh water.

“Luckily Nasdaq, who had the required spare on board was close by and we deviated from our course to meet up with Rob and his team to do the transfer a few hours ago. All went well and we now have a working watermaker again. Thanks to the Nasdaq team for helping us out!” 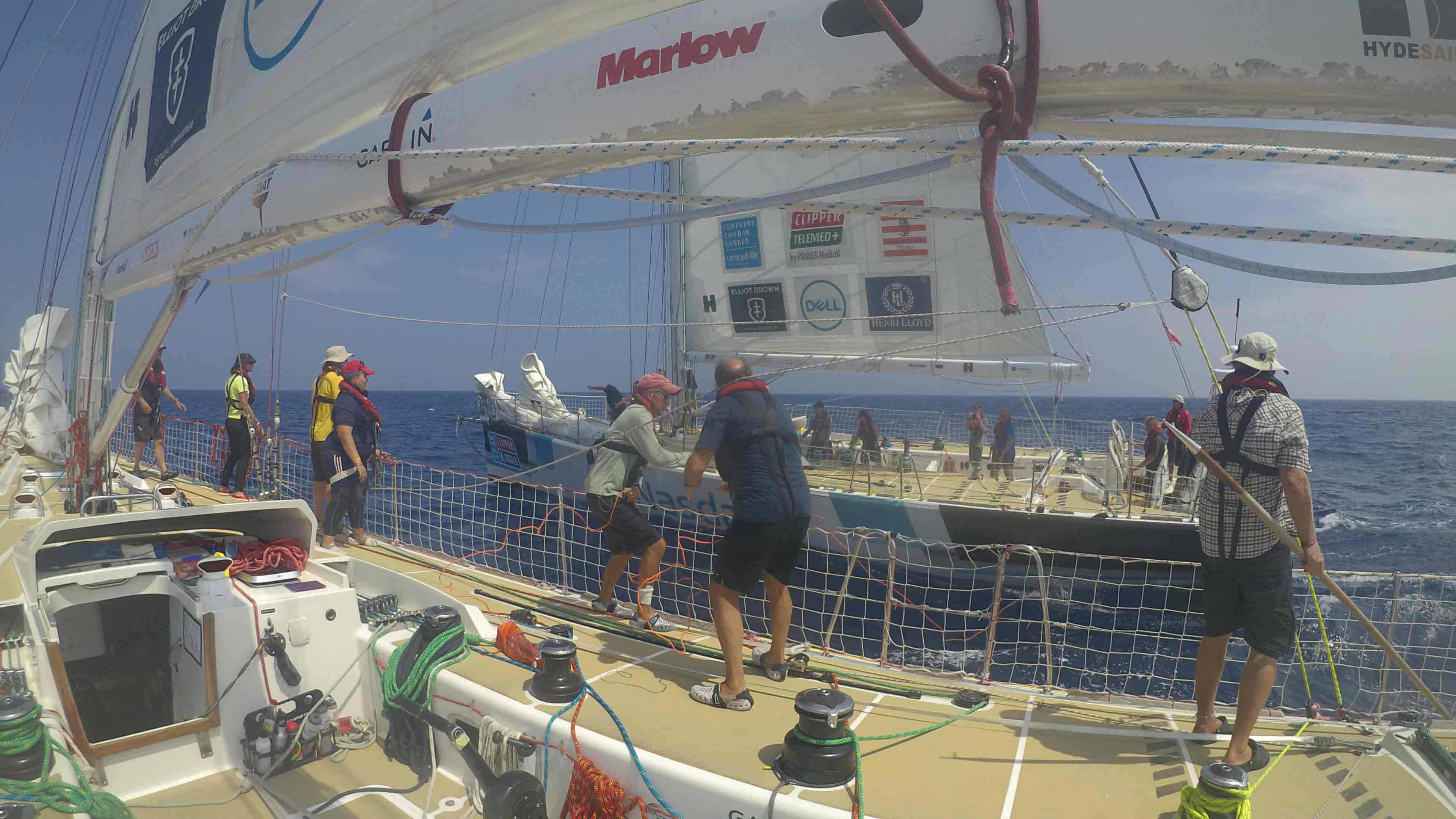 Eleventh placed Nasdaq Skipper Rob Graham adds: “Everything went smoothly and I think both crews enjoyed the novelty of putting into practice something which we had trained for. Both boats have now resumed racing, and (in our case at least) dodging trawlers as we go. We managed to safely pick our way past an oil field overnight - the huge platforms look like a scene from 'Bladerunner' when they are lit up at night.”

The Race Committee will convene to decide on the awarding of redress and an announcement will be made on this shortly.

The wind is forecast to build further today before easing off tomorrow, before coming in pretty strong on Thursday into Friday as the fleet approaches the south end of Taiwan.

With the entire fleet headed north of the rhumb line in search of the best conditions, the key decision this morning has focused on when to tack and which teams would go first. In the latest position update, Unicef, and Dare To Lead, have made the first moves with the rest of the fleet expected to follow shortly

Keep up to date with the latest changes via the Clipper Race Viewer and hear more from the Skippers and crew on the Team Pages.

Tomorrow, Sunday 4 March, sees the Clipper Race fleet take back to the water for the start of the eighth of 13 stages which make up the Clipper 2017-18 Race series; Race 8: The Sailing City Qingdao Cup.Race day will get underway at 1100 local…