As we approach the final 500nm of this intense race to Qingdao, the Scoring Gate has posed a tactical headache overnight, with the five leading teams making a contrast of moves in their dilemma on whether to go for the bonus points, or concentrate on overall race positions.

Race leader PSP Logistics decided to abort its plan to head for the gate after experiencing a non-forecasted wind shift, as has Sanya Serenity Coast, with both teams opting to stick with the fastest route to the finish line. Qingdao is currently the only team which we can see that has gone for it as Visit Seattle and GREAT Britain elected to go into Stealth Mode to keep their competition guessing. 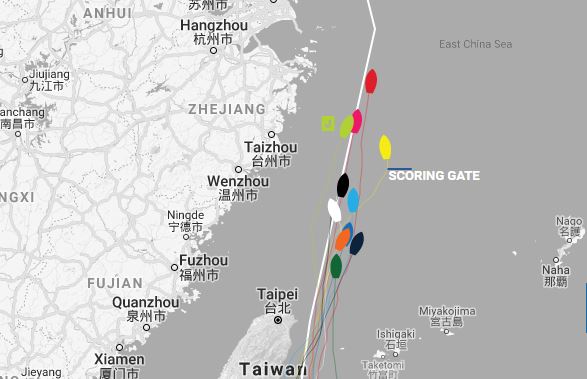 Qingdao Skipper Chris Kobusch explains: “Once we passed the Virtual Mark "Kitching", placed north-east of Taiwan, to port last night and started heading towards the Scoring Gate the wind shifted forward of the beam again and we were back on the heel. It will be interesting to see if PSP Logistics went for the Scoring Gate and where Visit Seattle is in relation to us (they went into Stealth Mode twelve hours ago and we lost them on the AIS). Soon we will find out if we got our first points for this race or not.”

Chris adds: “Sanya Serenity Coast, PSP Logistics, Visit Seattle, Liverpool 2018, GREAT Britain and us are all fairly close together, positions are still at stake and we will have to push hard for another sprint to the finish line.”

Approximately in the middle of the fleet, Garmin is still trying to make its mind up on its decision, with Skipper Gaëtan Thomas reporting: “So busy here with the Scoring Gate on the discussion, but the wind is backing and dropping so if we go for it, we might lose some places. So, we are waiting for next scheds to see what the other boats are doing!”

The Scoring Gate is not the only subject causing headaches as huge fishing fleets, made up of hundreds of vessels, have been lighting up the night, causing sleepless nights for Skippers as teams have had to disrupt sail plans and divert their courses whilst sailing on with absolute caution in order to avoid running into their nets.

On this, Gaëtan added: “In the morning we had one of the biggest pack of fishing boats I saw. We managed to sail deep down, and Nell Wyatt at the helm did an excellent job keeping the spinnaker without collapsing or wrapping it which is an art when very deep. I was in the Nav Station and counted 163 targets to avoid, we took some pictures, all littles fishing boats in timber…”

Nasdaq Skipper Rob Graham, is staying positive after a number of unfortunate setbacks involving wind holes and fishing fleets now see his team 10nm behind Garmin, and just 20nm ahead of Dare To Lead.

He reports: “We've had a very busy morning today on Nasdaq: our first kite hoist just after sunrise was aborted when the Code 2 (medium weight spinnaker) wine-glassed itself before opening fully. That was immediately replaced by the Code 3 (heavyweight), which flew happily for about 20 minutes until a fishing fleet appeared across our path and we had to switch back to Yankee 1 to skirt around it.

“Having caught us up (again!) Dare To Lead had issues with the same fleet, so Skipper Dale and I had a brief chat and discussed options through the fishermen. After picking our way through the nets and boats we reverted to our (now repacked) Code 2 which is speeding us towards Qingdao.”

He adds: “Having made up some serious mileage on the little group ahead of us (Sanya Serenity Coast, Visit Seattle, Liverpool 2018, Qingdao) yesterday, we lost it all overnight when we got stuck in a wind hole close inshore. Elation and frustration in equal measure then, but we still have 600+ nm to go, and we're still pushing hard to make up positions.”

After a dramatic past 24 hours, there is also good news for teams amidst their challenges as boat speeds seem to now be up across the whole fleet, with teams trucking along, finally enjoying some downwind conditions.

HotelPlanner.com Skipper Conall Morrison, in eleventh place, reports: “Monday morning sees us making hay whilst the sun shines. We are making 12 knots directly towards our next waypoint east of Shanghai. We can see Unicef on the horizon at a range of 8 miles, it seems they have the upper hand at the moment in our game of cat and mouse.

“Last night we were becalmed and going slow for about eight hours before the easterly kicked in and then changed to south-easterly. Since 0500 local we have been under code sails and moving much faster.”

The latest weather forecast from Simon Rowell, Clipper Race Meteorologist, predicts that progress should stay fairly consistent for the next three days, and he advises that the fog which is usually present in these areas has retreated north of the fleet which is good news for now though warns it is unlikely to be fully avoided. The next low forming for the fleet is due around 15 March, meaning teams are being prepared for the fact the race could finish in another upwind slog.

The latest Estimated Time of Arrivals to Qingdao, which will be updated regularly can be found here.

Qingdao and Nasdaq have both been awarded race redress following a rendezvous on March 6 between both boats in order to transfer an essential watermaker spare part from Nasdaq to Qingdao. The spare part was a bleed…