Day 4 of Race 9 has been a case of ‘Groundhog Day’ as the light winds that had been a feature of the previous 24 hours continue to frustrate the teams. Despite not making much progress towards the southern tip of Japan, before facing the North Pacific, the racing continues to be close with less than 45 nautical miles (nm) separating the eleven boats.

It is even closer at the top with new race leader Qingdao less than one nautical mile ahead of second-placed Visit Seattle, although neither has managed more than 20nm over the past 12 hours, with Qingdao Skipper Chris Kobusch reporting: “The wind is gone. We are pretty much becalmed and started a drift race with Visit Seattle which is within sight on our starboard beam.

“Every time the boat speed exceeds one knot the crew cheers and it sounds like fireworks are going off on deck. The water is so calm one can hardly see where the sea ends and the sky starts. It seems the weather forecast was correct and we are sitting in the eye of the high and will be here for another day or so.”

Third-placed Unicef was less than 8nm off the lead this morning with Skipper Bob Beggs explaining: “Light wind sailing requires lots of concentration with ever shifting winds between 0 and five knots - we are getting lots of practice at this.”

However since the team’s blog, Unicef has reported a malfunctioning watermaker and due to the light airs and current lack of progress of the fleet, Race Officials have made the decision to arrange a rendezvous with PSP Logistics to collect a spare unit it is carrying. Unicef is now motoring to carry out the exchange which will have minimal effect on PSP Logistics’ position and course,before motoring back to its original position, where the team will then re-join the race. 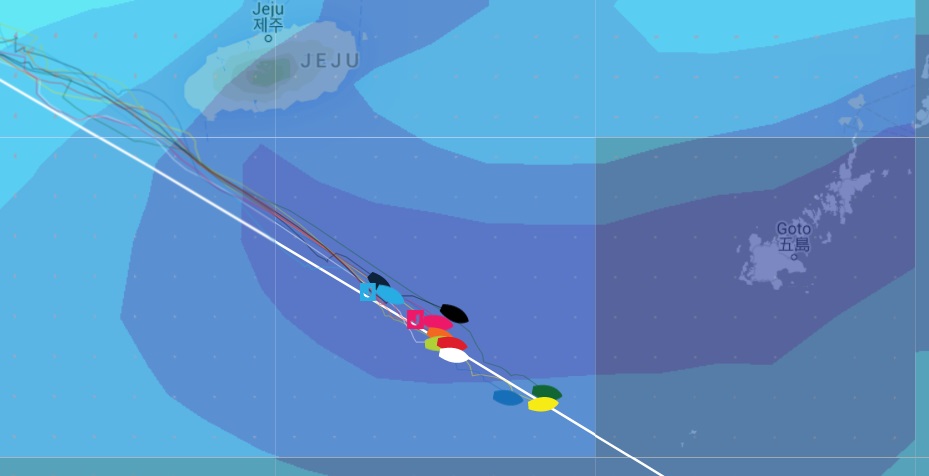 The chasing pack, consisting of teams positioned from fourth to ninth, is closely bunched together and is just over 20nm off the top three. Dare To Lead is currently in fourth but Skipper Dale Smyth is concentrating on his own team’s progress rather than being too concerned about the others, saying: “I don’t have very much to say about the current grand ‘drift off’ that we are all having against each other. The overwhelming thought is that it is going to take an awful long time to reach Seattle in this fashion.

“Not the most exciting sailing on earth although it is pretty exciting when the boat gets a zephyr and creeps forwards at 3 knots! We are however slowly creeping across the chart and will get through this eventually.”

Many of the teams have been using the opportunity of being becalmed to clear the underside of their boats with PSP Logistics and Sanya Serenity Coast, in fifth and sixth respectively, clearing netting and weed. Both teams are now in sight of HotelPlanner.com, which has gained some miles in the fickle winds and maintained its seventh position. 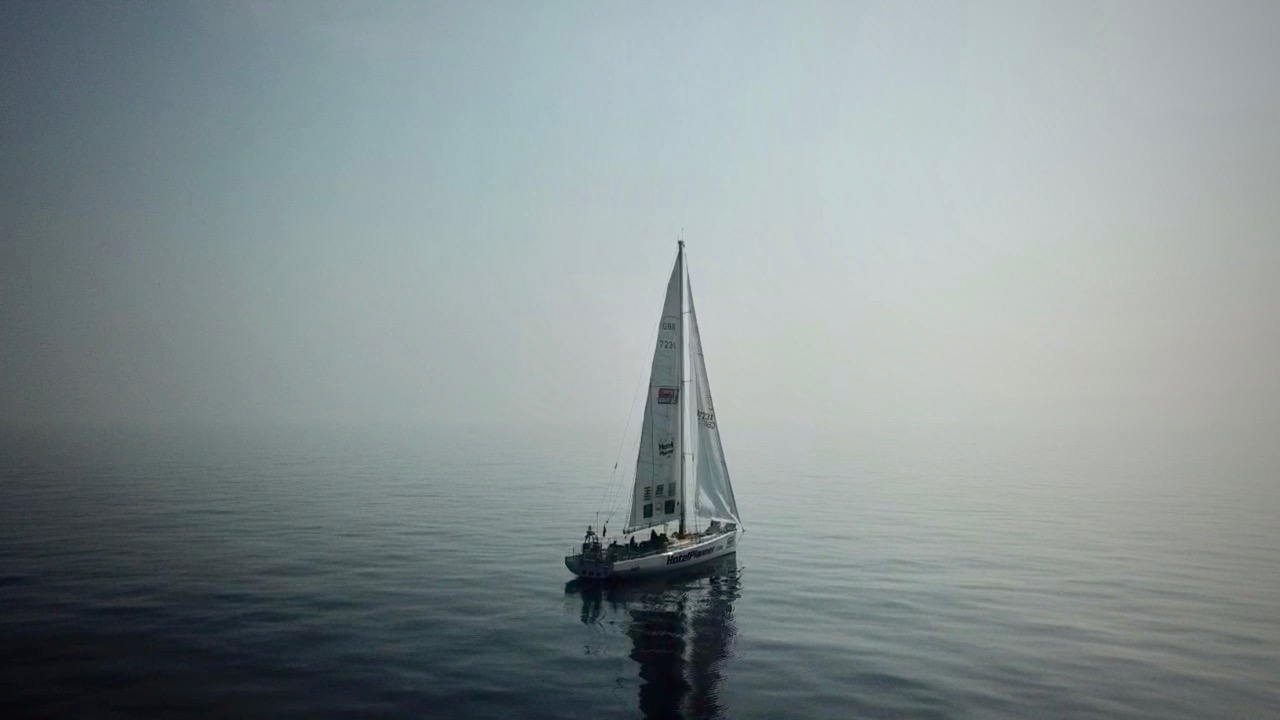 IMAGE: A view of HotelPlanner.com from on board Sanya Serenity Coast.

Garmin has climbed a position to eighth place after clearing its rudders, keel and prop with Skipper Gaëtan Thomas explaining: “We were on a flat sea with no wind at all so [crew member Ewan Slight] put the wetsuit on and off he jumped in the water to clear it up. Of course, he was well attached to the boat - good job mate.”

Meanwhile Liverpool 2018 has lost a few positions today and Skipper Lance Shepherd explains: “It has been an extremely frustrating time aboard our little pink boat. After becoming catch of the day for a Chinese fishing boat two nights ago we have struggled with boat speed and we have steadily slipped back through the fleet to ninth position.”

Towards the back of the fleet, just over 40nm from the leader, the racing remains close and Nasdaq Skipper Rob Graham, currently in tenth, reports: “Nasdaq managed only 90nm in the past 24 hours, having seen a maximum wind strength of just 7 knots and frequently too little to register in the instruments. Oh well, at least 84 of those 90 nm were on course towards Seattle, which seems a very, very, very long way off right now.

“As I type we are neck-and-neck with GREAT Britain [eleventh] under Windseekers, and are close enough to have Sanya Serenity Coast, PSP Logistics, Liverpool 2018, Garmin and HotelPlanner.com all showing on our AIS so although the racing is certainly not fast, it is close.” 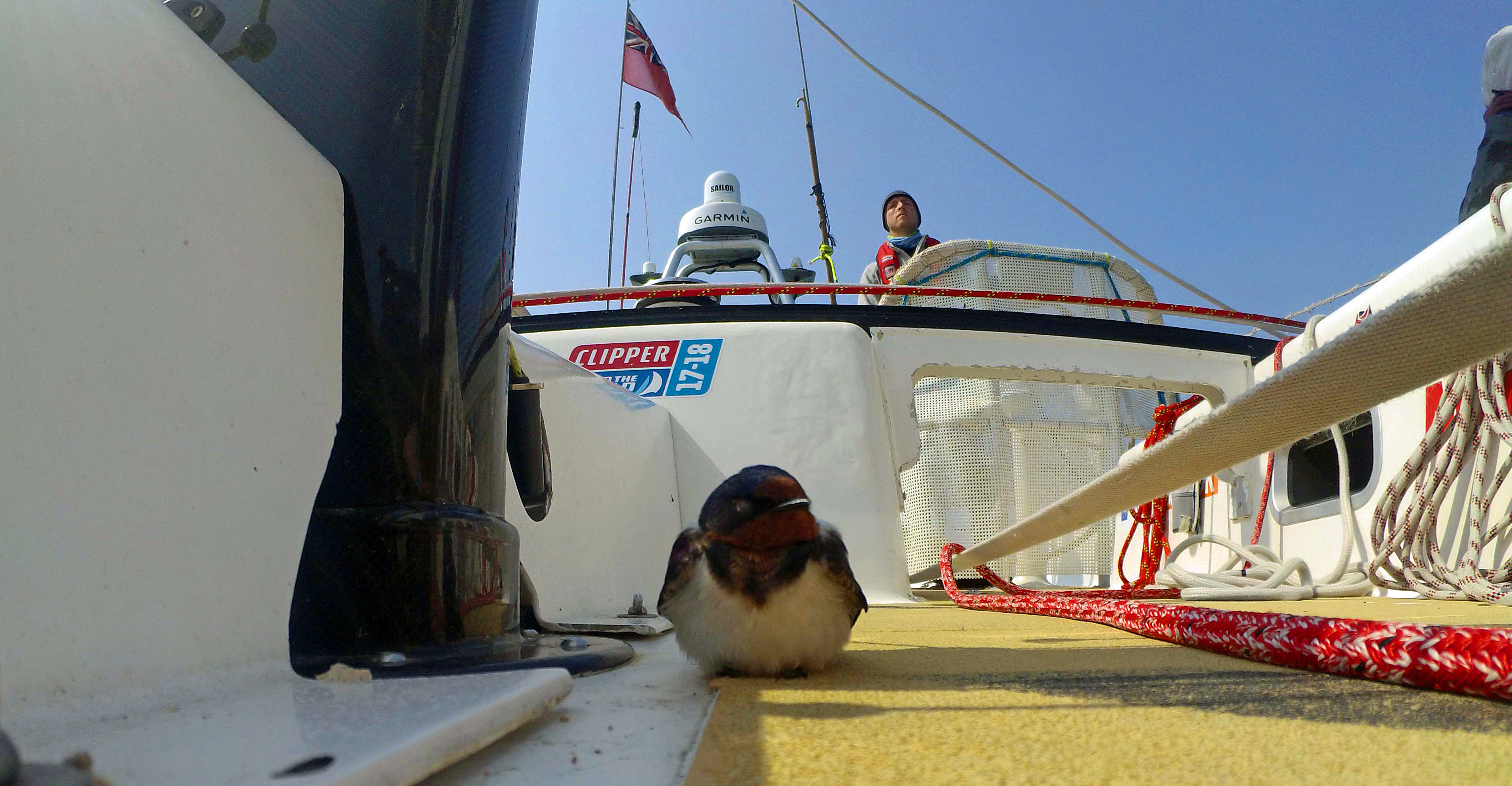 IMAGE: A bird lands to rest on board Nasdaq.

Clipper Race Meteorologist, Simon Rowell, explains that the high-pressure cell is pretty much over the fleet now but heading down to join the ridge along the south coast of Japan. During the next 24 hours, the teams should gradually get more breeze – not much, and likely on the nose - but at least a bit of breeze.