Race 9, from Qingdao, China, to Seattle, USA, is officially underway after the thick fog cleared and the wind picked up sufficiently to allow for the delayed Le Mans start to take place at 0800 local (midnight UTC) this morning. Teams are now making best speed south east, dodging wind holes and fishing fleets en route to the first target in this endurance test, the southern point of Japan.

Named The Race to the Emerald City, Qingdao has a lead of less than one nautical mile at this early stage, ahead of PSP Logistics, in second, and Liverpool 2018 in third. 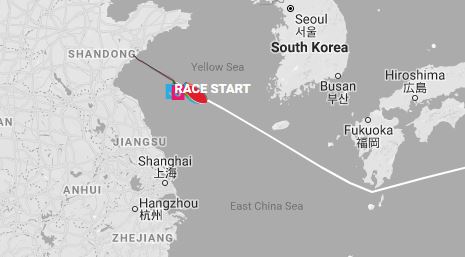 Commenting on the start, Qingdao Skipper Chris Kobusch detailed: “Wendy (Sanya Serenity Coast Skipper) was appointed to organise the Le Mans start: all eleven boats lined up under main sail and engine to follow a course and speed set by the lead Skipper. At the one-minute countdown all engines go off and sixty seconds later the crews are allowed to move forward to hoist the headsails. The first team with their sails up, pulls away and gets clean air and an advantage over the rest of the fleet.

Adding, Chris says: “The weather forecast shows light winds for the first couple of days, which gives the crew some time to settle in and find their sea legs. Once we are past Japan we can expect the first of the fast-moving lows of the North Pacific, which Leg 6 "The Race to The Emerald City" is infamous for.”

Average boat speeds are low, around 5 knots, as the winds are still light as forecasted, but most have reported that the comfortable start has been a welcome way to start this 5,500nm race as crew members settle into a long few weeks at sea.

Whilst the fog dissipated enough to start the race, it is still present however, causing limited visibility, and the fishing fleets are still a feature so teams are once again on high alert and are also on the lookout for dreaded wind holes.

Visit Seattle Skipper Nikki Henderson is further west of the leading three teams and reported that her team had been caught out by one as the team battles it out for fourth place with Dare To Lead. Meanwhile Sanya Serenity Coast Skipper Wendy’s blog unfolded that exact same situation as she reported: “We have good speed and are heading straight towards our first lot of Virtual Marks, fingers crossed that big looming wind hole stays away.”

However in her next line she added: “Well as always, I spoke to soon, we are now in really light breeze just pootling along. It was a frustrating morning though as a few boats to leeward of us had a bit more speed, we are all pretty even now, so it’s a game of cat and mouse now."

As if the low visibility, fishing fleets and light winds weren’t enough challenge, an unexpected obstacle put paid to Nasdaq’s positive start and it now finds itself in eleventh position but still less than 15nm from the lead.

Skipper Rob Graham explains: “Nasdaq was making good progress - matching the boats around us for course and speed, when we suddenly ran into something. Our bow lookout glimpsed something submerged just below the surface but we didn't have time to avoid what turned out to be a huge plastic tarpaulin that wrapped itself around our keel.

“The additional drag immediately took our boatspeed from 7 knots to 2, and our competitors quickly pulled away. After heaving to (stopping the boat) we eventually cleared the rubbish away but had lost six vital miles to the fleet by that time. Nothing really in the context of a 5,500nm Race but horribly frustrating when everyone had been so close. Needless to say, Nasdaq is now working hard to make those miles back.”

Liverpool 2018 and Nasdaq have chosen to play their Joker Cards on this leg, which will see both teams pick up double their final race points, a fact that will be giving Rob and his team extra motivation to claw those miles back.

At the time of reporting, Unicef is in sixth place, followed by Sanya Serenity Coast, in seventh, Garmin eighth, HotelPlanner.com in ninth, GREAT Britain tenth and Nasdaq in eleventh.

The Pacific is the largest ocean on the planet and many have been awaiting this particular race with nervous anticipation. Unicef Skipper Bob Beggs, a Clipper Race veteran on his third race, knows well what is to come.

Summarising the general comments across the fleet, he says: “As a crew we have settled into our routines and the new joiners are adding some flavour to the team and have seamlessly taken over their roles, the atmosphere on board is good with many contemplating the enormity of the Pacific Ocean and the task ahead and looking forward to the challenge.

“This is my third crossing of the Mighty Pacific and she can never be taken for granted, still Unicef, our home, is well prepared and we are looking forward to the adventure to unfold.”

As the teams ease into life on board, with light winds forecast for the first couple of days, you can keep up to date on the latest positions of the fleet via the Clipper Race Viewer and hear more from the Skippers and crew on the Team Pages. You can also view the spectacular images of the Qingdao Departure Ceremony on our Gallery.

The Clipper Race fleet is preparing to embark on the ‘The Big One’, Race 9: The Race to the Emerald City across the world’s biggest ocean, the North Pacific. Approximately 5,600 nautical miles in length, Race 9 from Qingdao, China, to Seattle, USA, will see…

Since the dramatic race finish which concluded the Asia-Pacific Leg 5, Clipper Race crew have enjoyed a cultural break in Qingdao, China, but it’s now time for the next challenge; 5,500nm across the North Pacific to Seattle, USA. Here the Skippers reflect…