After completing the toughest stage of the Clipper 2017-18 Race so far, which included hurricane strength winds and Phenomenal sea states of over 14m in height, each of the teams came together this evening, Sunday 22 April, to celebrate their achievements.

Seattle and seafood go hand in hand, so the location of Ivar’s Acres of Clams on the city’s iconic waterfront was a fitting setting for Race 9 Prize Giving ceremony. Almost 500 Clipper Race crew, Skippers and supporters were treated to a selection of fresh seafood by owner Bob Donegan as celebrations got underway. 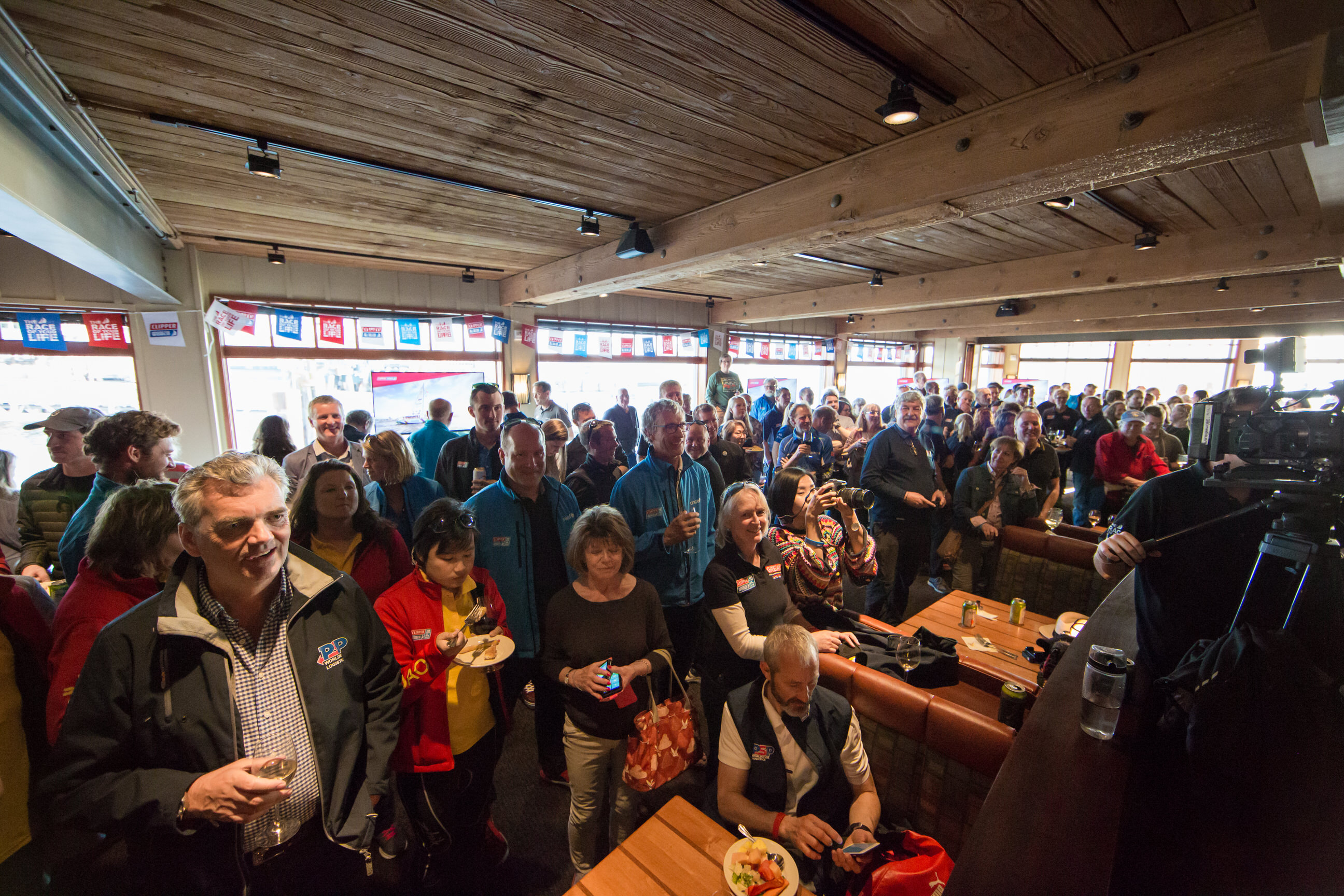 The event was opened by Ralph Morton, Executive Director of the Seattle Sports Commission (SSC), who said: "I had such a good time watching you call come into Seattle yesterday after completing Leg 6.

"I hope you have an amazing time here in Seattle, we will be seeing more of you in the coming days and I hope you get to enjoy all that the city has to offer throughout the week." 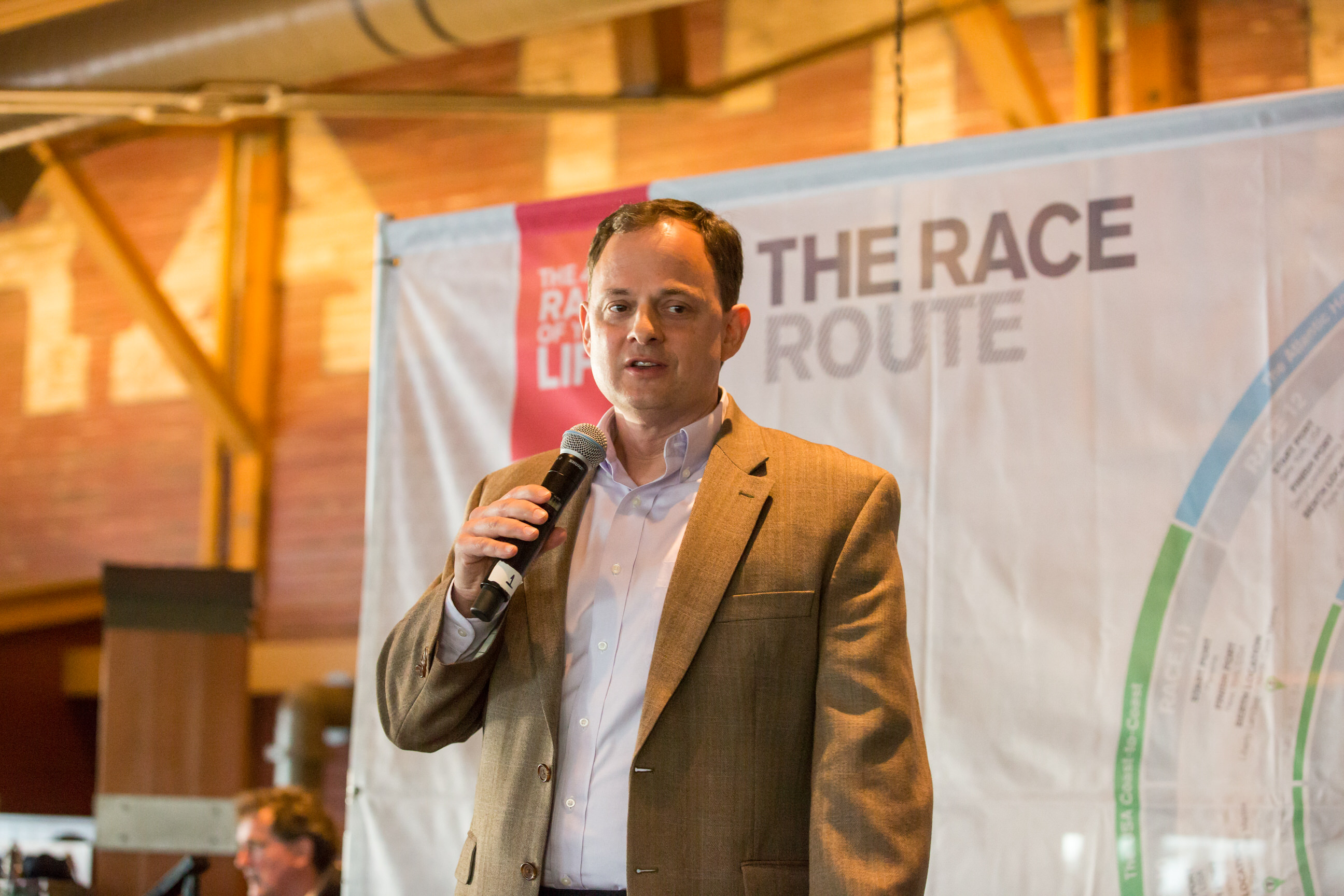 On the unexpected sunny weather he added: "You're welcome for the weather, it doesn't always rain in Seattle!"

Clipper Race Director Mark Light then took to the stage to begin the prize giving formalities and the first prize of the evening was the Unicef Charity Champion Award.

Celebrating Clipper Race crew and supporter fundraising achievements, the Unicef Charity Champion Award for Race 9 was awarded to Liverpool 2018 Skipper Lance Shepherd’s mother, Margaret Hind, and her knitting circle, for making 14 bright pink bobble hats and auctioning them to the team to raise £700 for the charity. 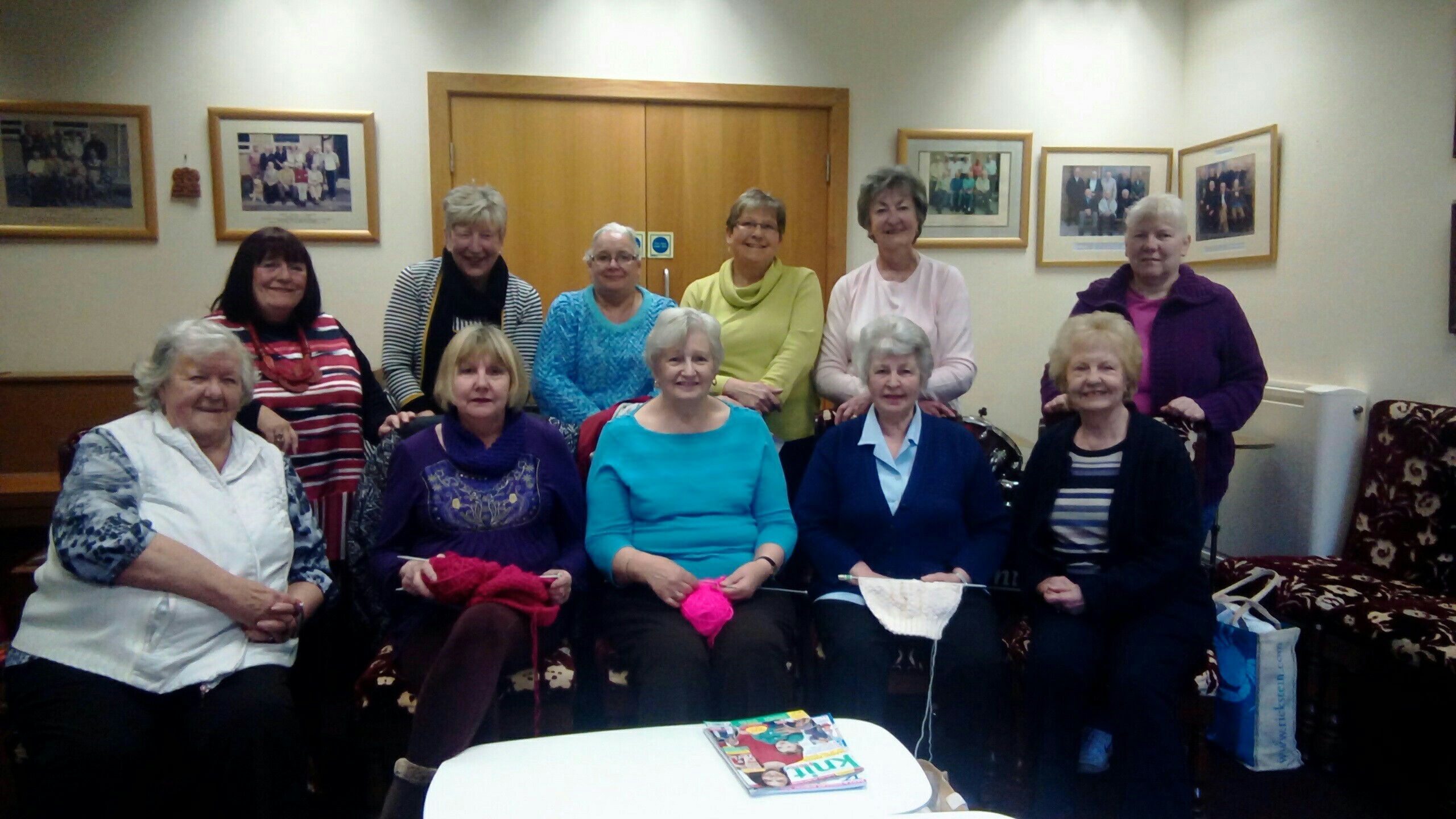 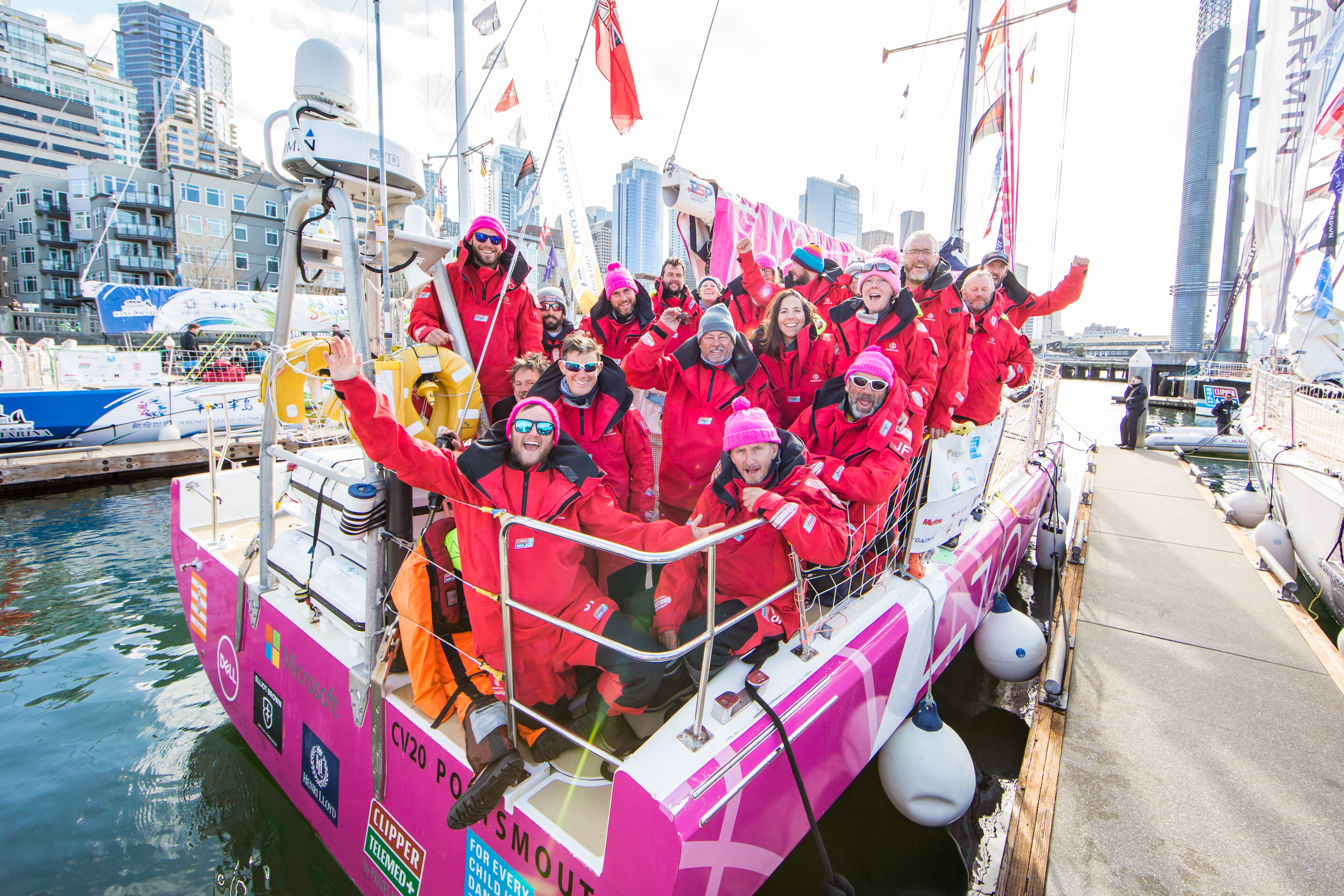 The winner of the Henri Lloyd photo competition was then awarded to new joiner Lyndy Geddes who is racing on board Liverpool 2018 for Legs 6, 7 and 8. Lyndy’s photo captured perfectly what ‘life at an angle’ meant during Race 9 and had the seal of approval from the Twitter poll.

Life at an angle, the winning photo taken by Lyndy Geddles on board Liverpool 2018 in the North Pacific Ocean

Next up, the Race 9 Elliot Brown Ocean Sprint winning team, Garmin, took to the stage led by Skipper Gaëtan Thomas and there was a big round of applause for the team on its maiden sprint win. For Nell Wyatt, Garmin round the world crew member who competed in Leg 6 during the 2015-16 edition, this was the second race across the North Pacific Ocean. On winning the Elliot Brown Ocean Sprint she said: "It is a fantastic achievement for the whole team and knowing that we managed it during some of the toughest conditions yet is even more rewarding."

The cheers continued for Sanya Serenity Coast which claimed its third Scoring Gate victory of the 2017-18 edition.

After a short break, Clipper Race Director Mark Light took to the stage to reveal that Dare To Lead has been awarded the Stormhoek Social Spirit Award for Race 9 which celebrates the team spirit of the crews. Stormhoek’s Lise Ewans explained: “This race was tough for everyone but after reading the Skipper blogs, one team stood out for us almost from the start. Despite the enormous enthusiasm we had from supporters this race – organising competitions and rallying their friends to vote – the team with by far the most votes this race is Dare To Lead!” 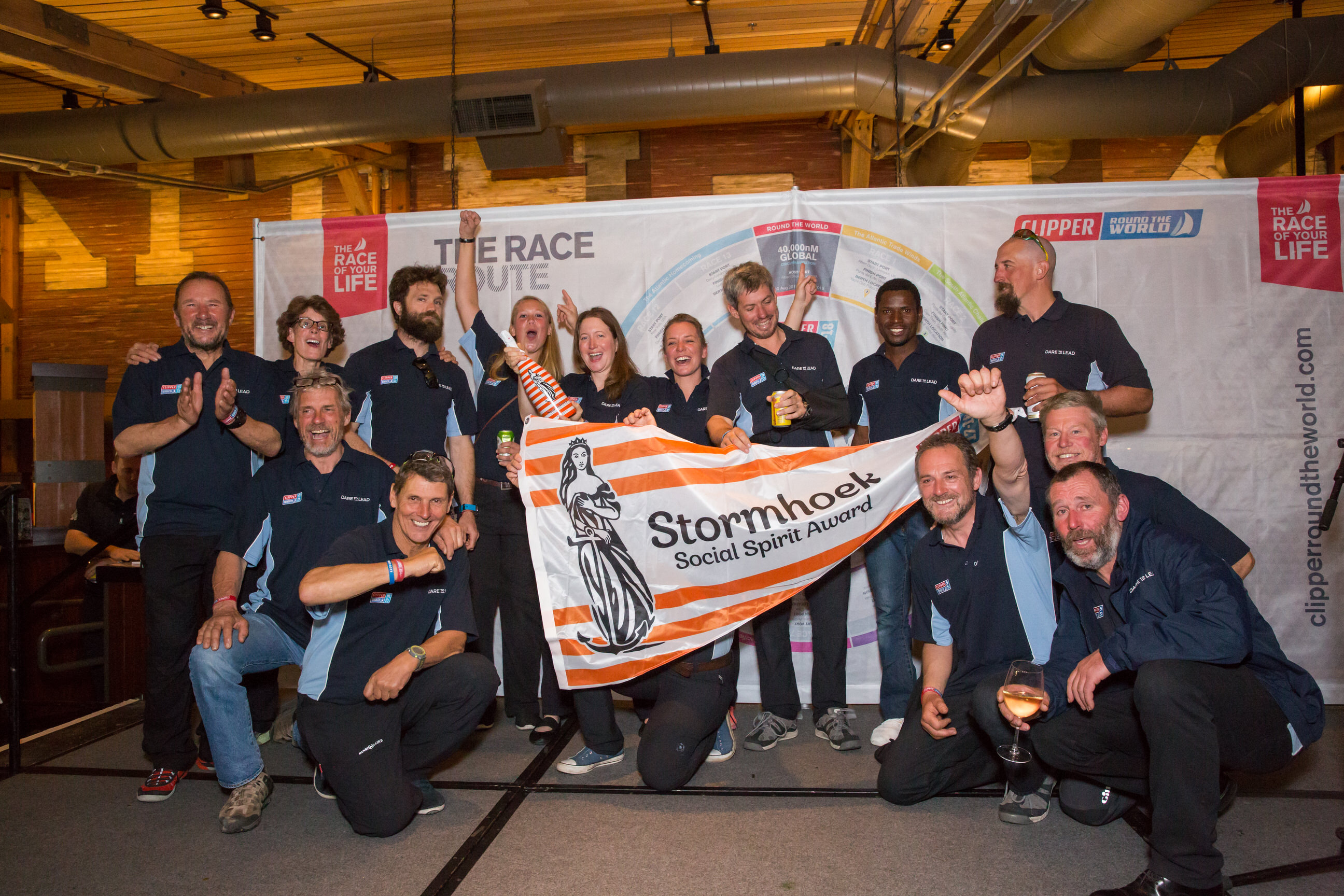 Image: The Dare To Lead team picks up the Stormhoek Social Spirit Award

Dare to Lead circumnavigator Charlie Garratt, 28, was delighted with the win and after accepting the award with her teammates on stage, she said: "We experienced the toughest conditions of the circumnagivation so far and it required a great deal of teamwork to get through each watch. The team around you makes such a big difference and its great that we can celebrate that with the Stormhoek Social Spirit Award for Race 9."The cheers continued for Sanya Serenity Coast which claimed its third Scoring Gate victory of the 2017-18 edition.

Unicef claimed its second podium of the circumnavigation and the team was in fantastic spirits as it took to the stage to receive its third place pennants. 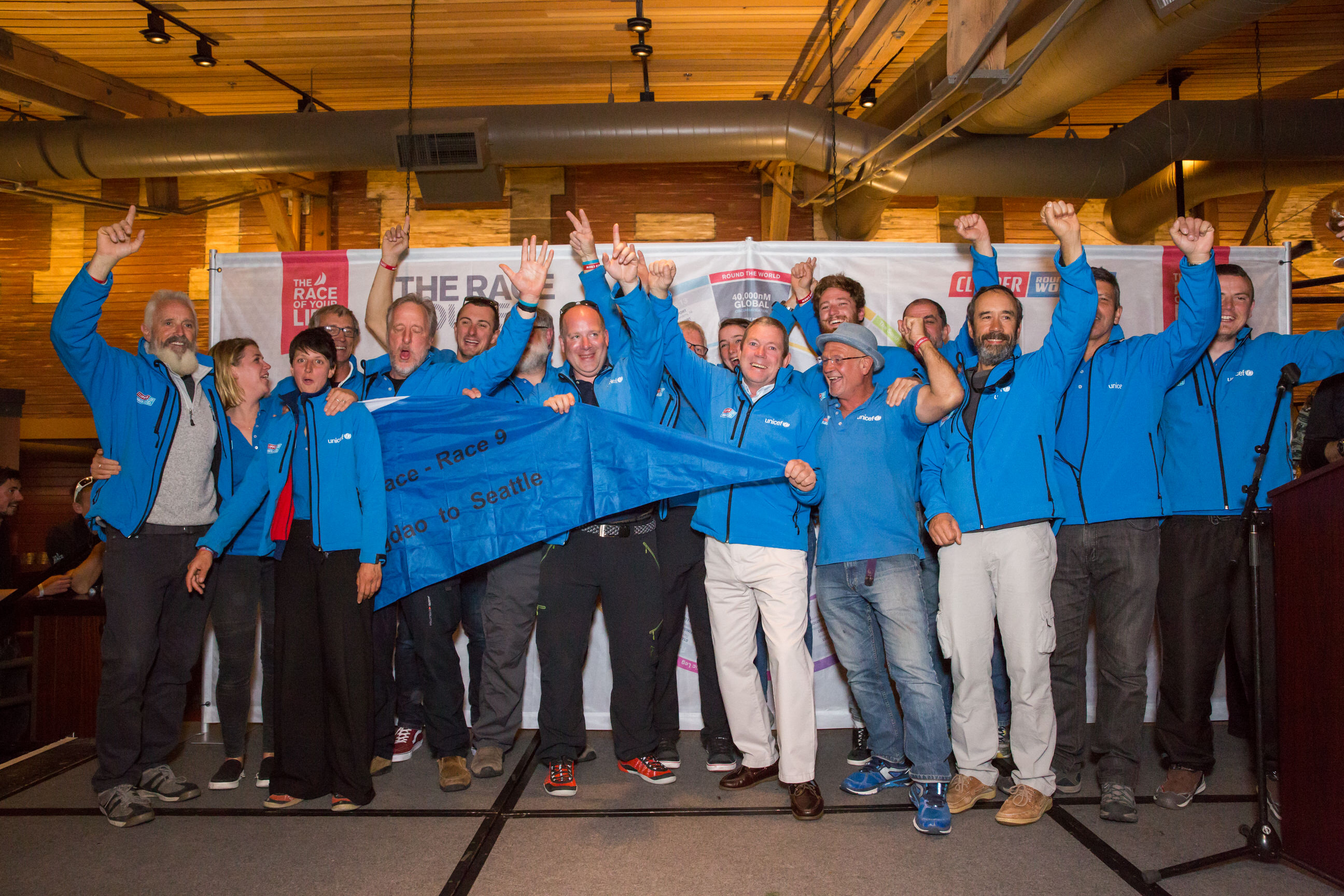 The top of the leaderbord saw a Chinese one-two and the Sanya Serenity Coast team was in exceptionally high spirits as it celebrated its fifth podium of the 2017-18 edition so far. First placed Qingdao then took to the stage to receive pennants for its maiden race win. The final award of the evening, presented by Ralph Morton, Executive Director of the Seattle Sports Commission (SSC), went to home team Visit Seattle, which remains in third place on the overall standings despite finishing eighth in Race 9, for its continued hard work and determination. Taking to the stage to a room full of cheers, Nikki Henderson and her Visit Seattle team, including Seattleites Shannon Dean, Marek Omilian, Andy Farnham and Javier Roca, celebrated their return home.

Summarising the race, and praising each of the teams, Clipper Race Chairman and Founder Sir Robin Knox-Johnston said: "Oceans do not distinguish between professional and non-professional seafarers. The conditions faced in this North Pacific leg would test the most experienced of sailors. The hurricane force winds have certainly been the toughest since our crew left Liverpool eight months ago. They have seen nature in the raw, conditions that would terrify most sailors, but they have come through it and given themselves an experience that most people on this planet can only ever visualise.

“I am immensely proud, both of our Skippers and crew's outstanding seamanship skills, which kept everyone safe in the extreme conditions, and also that after almost a month of racing, the action came right down to the final miles. Just five minutes separated two of the teams which is incredibly impressive. They can really call themselves sailors now.”

For local adventurers who are feeling inspired by the crew’s experiences, free open boat tours will be running on 24, 25, 26, 27 April, 1000 to 1900, at Bell Harbor Marina. Bring the family, meet the courageous crew and explore the vessels they call home for up to a year on the world’s oceans. Perhaps in two years’ time it could be you arriving home after taking on this epic challenge.

After almost a month at sea, the Visit Seattle team arrived into its home at the Port of Seattle today, Saturday 21 April, to a heroes welcome. Arriving in brilliant sunshine, the team was cheered in by locals, supporters and members of Visit…