Continuing the ‘halfway’ catch ups with round the world crew members here in Airlie Beach, where they’ve now sailed 20,000 nms of their 40,000 nautical mile journey, we asked PSP Logistics’ Nigel Holcombe to tell us how his experience has been so far. 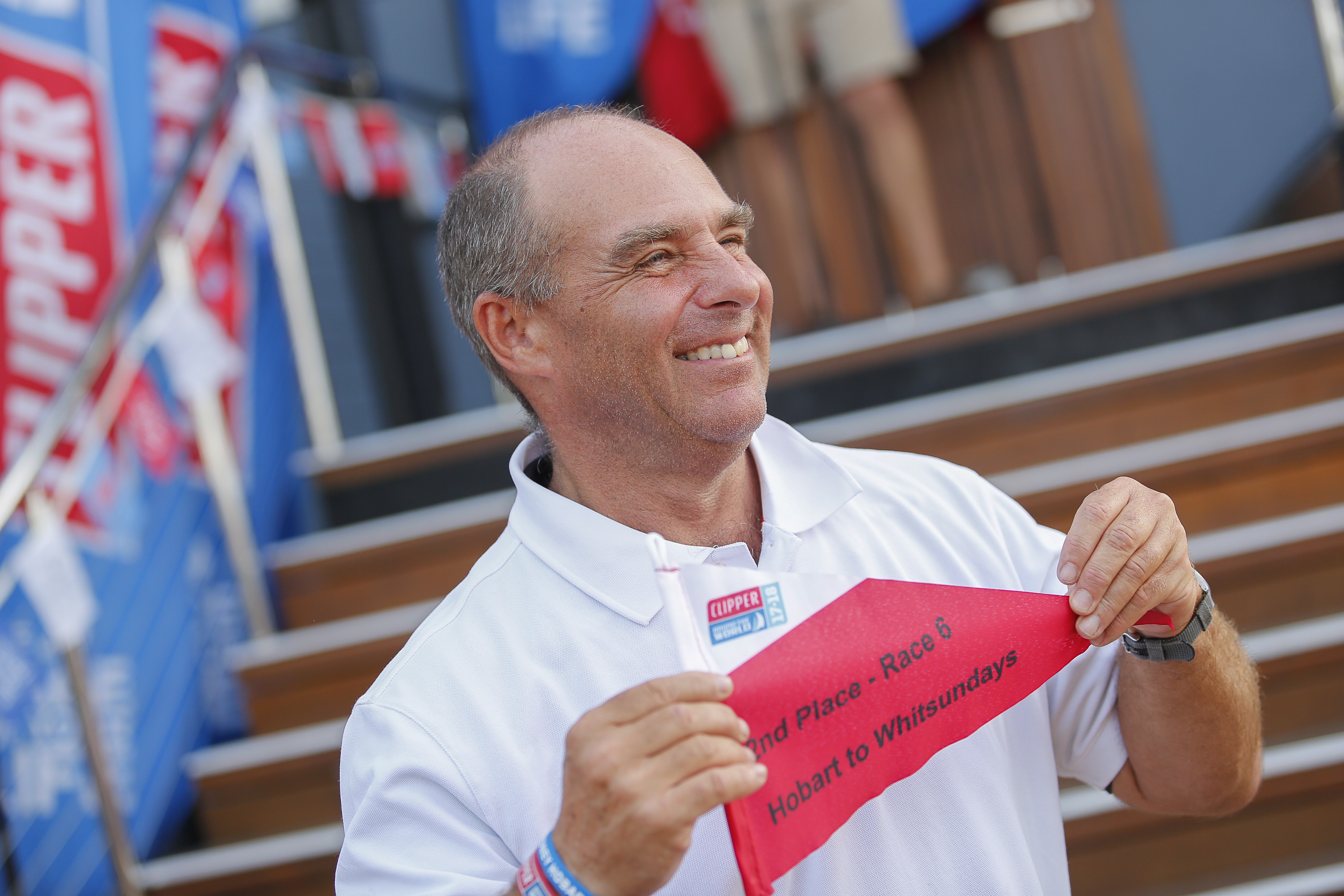 A fairly eventful journey, the PSP Logistics team has celebrated an impressive three podiums despite the incident in Leg 2 after a whale collided with the team yacht shortly after leaving Punta del Este, plus a change of Skipper after Roy Taylor stood down in Cape Town and was replaced by Matt Mitchell.

In response to being asked how he is feeling at the end of the All-Australian Leg 4, Nigel says: “You know what, we feel fantastic. We’ve now got to that stage where head-to-head we know we can sail as well as any other boats.

“At crew allocation we looked around at each other and we didn’t really think we would be a competitive boat. We thought we’d enjoy each other’s company, but unbelievably and perhaps a little surprisingly to ourselves we’ve become a really good sailing a very good sailing team, we’ve got some very, very good sailors on board and we feel extremely competitive. It’s now got to the stage where we expect to get podiums and hope to be up there with the leaders each time, and this is a strange dynamic to get our heads round actually.

“I feel very proud to see how far we’ve come together. We never thought we would get to this stage having already achieved what we have. I have to pinch myself a little bit sometimes as I was not a sailor myself so I’m learning all the time and we’re really delighted and proud of our performance. I just love everything.” 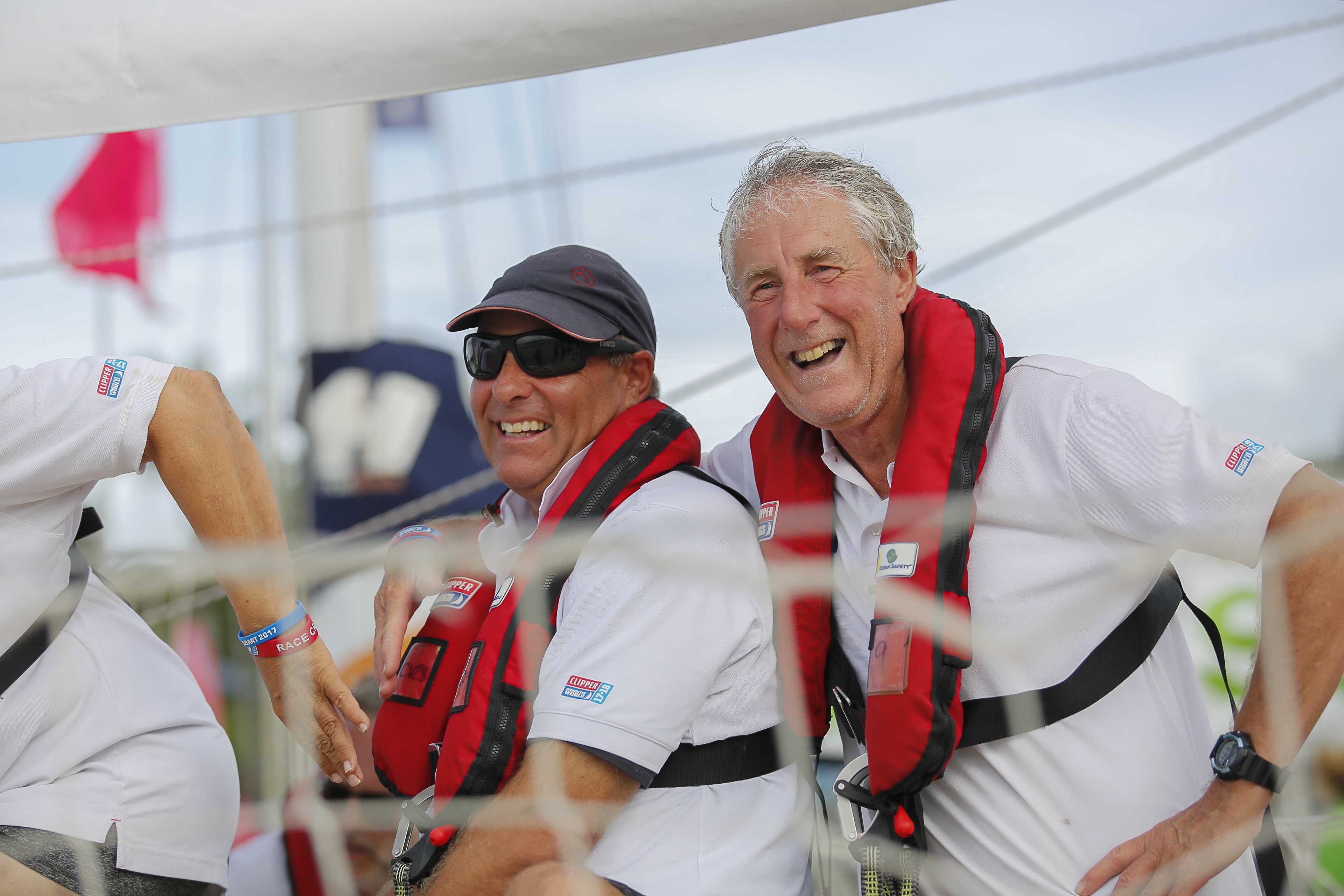 A former Commodities Trader, Nigel had little previous sailing experience before he signed up to take part. On why he decided the Clipper Race was for him, he says: “I’ve played a lot of team sports in my life and I love the bonding that comes with being part of a team, which I knew would come if I did this. Bonding closely with other people is a tremendously enriching experience.

“It was always about going all the way round the world, that was the challenge for me. It was about finding a big personal challenge really. I had done a tiny amount of sailing. I did the Round the Island Race with Brendan Hall who was the winning Skipper in the 2009-10 edition. He had told me how wonderful an experience the Clipper Race was and he sent me the book he wrote about it. I asked my wife about it. Unbelievably she said yes and was even encouraging about it! She never thought I would do it but she was definitely encouraging and you know I just jumped in. You have to jump in to the unknown.

“I’m not the only one on the team who didn’t know how to sail. It’s just about going from zero to very quickly, learning the skills. If you’ve got the right attitude, which I’m not saying I have, you can go a long way in life and get a lot more from it too.”

Asked about his biggest highlights from the experience so far, Nigel says: “What chance do I get in my time of life to stand up there on the podium in front of hundreds of people cheering for you. These things just don’t happen in my real life. And when we went to Hobart we had a thousand people there cheering us in, just incredible.

“In Cape Town, when we came in late after the incident with the whale, to see all the teams and the staff stood there waiting to greet us, and the African choir that sang, well I was in tears I can tell you. It was unforgettable. I’m just a lucky guy and I feel very privileged. I love these guys I sail and live with. We’re just a quiet, unassuming bunch really but honestly, what a privilege it is. I feel a very lucky person to be experiencing this journey with such wonderful people. Long may it continue.

“We’ve certainly surprised ourselves in our abilities as a team and what we’ve been able to achieve is unbelievable. I think it’s really changed the way we ourselves. It might sound arrogant and ridiculous but we think we’re one of the best teams and it gives you strength when you have to try and go and chase these other teams down in a race. All credit to Visit Seattle on this race though. We couldn’t touch them at all, they sailed incredibly well.

“Every team bonds closely but we are as close as any of them and I’m proud that there is no complaining, no bitching, nothing nasty. Everyone on the boat is solid as a rock and I think it gives us quiet strength. There are no egos, we are a humble bunch.” 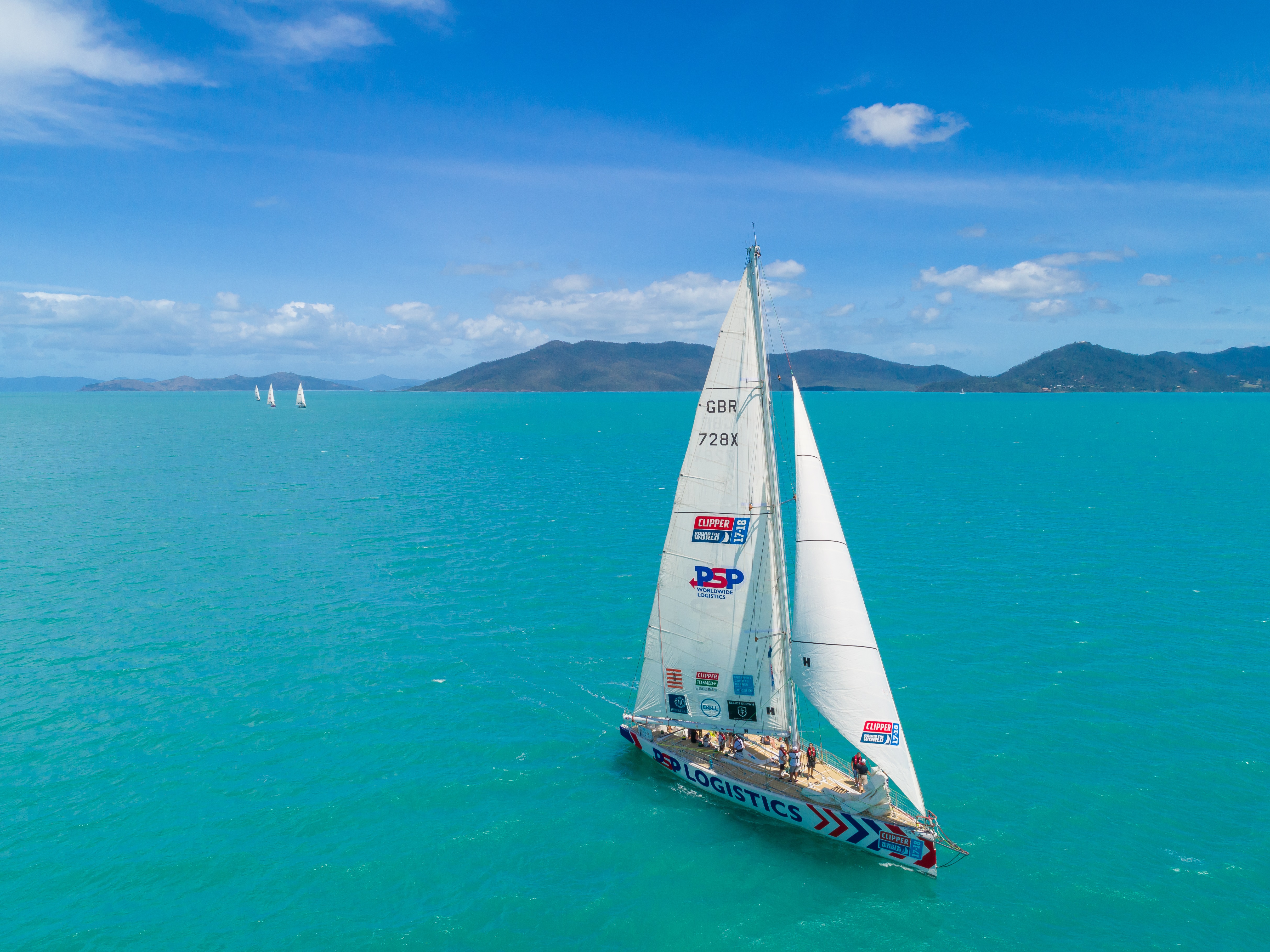 It’s clear there have been a number of highlights experienced but what about when it gets tough, how does it affect morale and are there personal lessons to be made along the way?

Nigel says: “It’s interesting as I am learning a lot about myself. I know now that I can do some things very well. Of course, I’ve hit low points from time to time, like everybody has, but you just have to try and get through them.

“You tend to know when people are going through a tough time as they just go very quiet. We just put an arm around them, give them a pat on the back and say its alright, I know what you’re going through. Sometimes you see people with this haunted look on their faces and you think well I know what that’s about and we just work our way through it. That’s the spirit of our team. We’re all there for each other when we need it.

“I now know that I do get ups and downs but also that I can deal with them well, which is also good to know.”

Going back to the subject of rewards, Nigel says he gets a lot of satisfaction from seeing others on the race succeed and enjoys getting to watch their own moments play out.

He explains: “We know how tough it is out there and you get rewards from all sorts of places. An obvious one of those is when you get to stand on the podium. These are experiences that people like me just don’t usually have. We’re not rockstars, we’re not sports stars, we are just ordinary folk and we want all the teams to experience that.

“I’m stood here with Rick from Liverpool 2018 who I did my level one training with and he is a fantastic guy. I wanted to see him do well and whilst I’m not saying I want to see him overtake me in the race, it is always a great feeling getting to watch others celebrate their moments too.

“We genuinely want to see every team get at least one podium. It’s a big family like that and it’s what makes this all such a great environment to be part of.”

After completing six of thirteen races PSP Logistics is in sixth position overall in the Clipper Race leaderboard. You can read past crew and skipper blogs via the PSP Logistics Team Page, which will be updated when the next race gets underway.

Race 7, to Sanya, China, the first of two races which make up the Asia Pacific Leg 5, starts on Monday 29 January from here in the Whitsundays, Australia.

Whilst some Clipper Race Crew Supporters are beginning to gather ahead of the fleet’s arrival in Airlie Beach, others, all…

NAME: Glenn ManchettAGE: 53NATIONALITY: UKOCCUPATION: Mechanic and Business OwnerLEGS: Whole circumnavigation TEAM: Sanya Serenity Coast Finding the perfect Christmas present can prove to be a challenging task for many of us but it was no problem for the wife of Sanya Serenity Coast crew member,…