For many when they think of ocean racing it is all about the big waves, big winds and difficult sea states, but light wind sailing can be just as tough. Whilst not necessarily as physical, light and variable wind conditions can be very mentally challenging, with every sail choice, manoeuvre, and movement of the helm affecting your yachts momentum. The scorching sun and high temperatures which accompany these conditions are exhausting when spending days and weeks at sea without any respite.

On any ocean passage there can be periods of light weather however, during Legs 1, The Atlantic Trade Winds Leg and Leg 5, The Asia Pacific Challenge, when the route crosses the equator, the crew experience the Intertropical Convergence Zone (ITCZ), or as it is better known, the Doldrums. 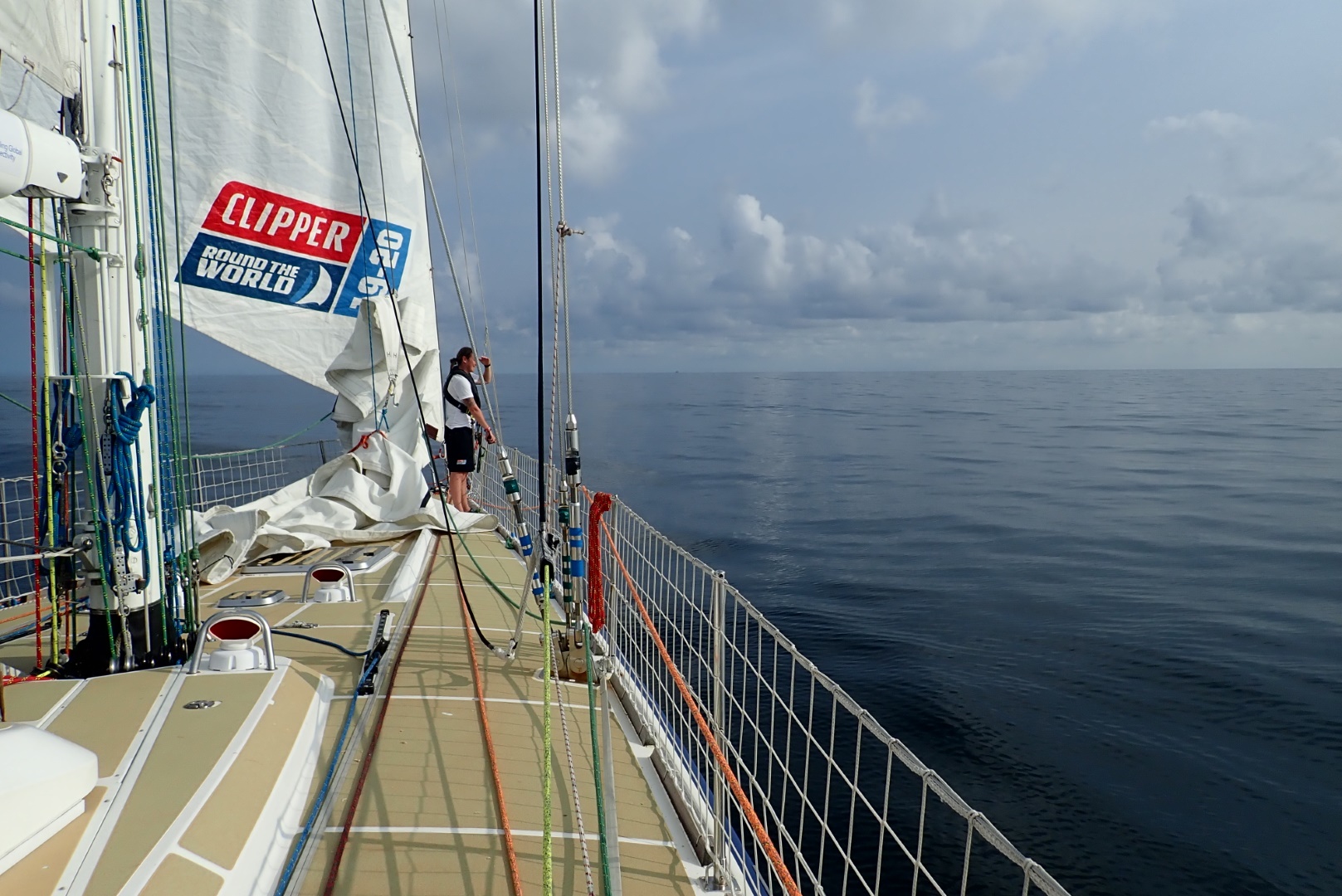 Paul Widdowson, a circumnavigator on board WTC Logistics during the race from Portimão to Punta del Este in the 2019-20 edition shared his feelings and experience in a poem titled, The Doldrums. A snippet of the poem reads: “What’s that on the water/ A ripple in view/ Hope its some breeze to move us a knot or two.” For the full poem click here.

The Doldrums is a broad belt of low pressure and weak pressure gradients, towards which the trade wind air streams of the Northern and Southern hemispheres flow. The expected weather is usually variable, light or calm winds, alternating with squalls and thunderous showers. This band of pressure moves North and South almost on a daily basis but also according to the seasons. It can be very difficult to predict exactly where the Doldrums will occur with any meaningful accuracy until a few days before.

This is a difficult and tactical phase of each Clipper Race circumnavigation. It is possible for a yacht to be becalmed for days on end within the grasp of this windless area. Therefore, in the past three editions the Clipper Race Committee has used a mechanism to remove the uncertainty of the Intertropical Convergence Zone or Doldrums, the Doldrums Corridor.

Deputy Race Director, Dale Smyth explains: “Historically, with the uncertainty of the fleet getting stuck in the Doldrums, it becomes very difficult for us to work out accurate arrival times, which has a huge knock on effect for supporters and the logistics of crew both leaving and joining for later legs of the race. So, we use the Doldrums Corridor rule, which allows yachts to motor over six degrees of latitude (360 Miles), should they need to. The entire Doldrums Corridor is 10 degrees, within two chosen degrees of latitude, outlined in the course instructions, and within this, teams can elect to use their engine and motor-sail for six of those degrees to escape the no wind area.”

Whilst this eliminates some the risk of being becalmed for days on end it does not take away the tactical element of the Doldrums for the skippers and crew, or the difficulties of being at sea in these conditions. It is up to each team where they enter and exit the corridor and when to turn on their motor.

Dale adds: “As much as people might think, ‘why are we motoring on a sailing race?’, it stops the boats getting trapped for long periods of time and also adds an interesting tactical element. There are always a lot of decisions to make and factors to consider when ocean racing, the Doldrums Corridor just adds further questions for the teams to consider. I know from experience that once the fleet has experienced the incredible humidity, heat and frustrations of no wind, it is a huge bonus to have the opportunity to tactically get out of that area and carry on racing.” 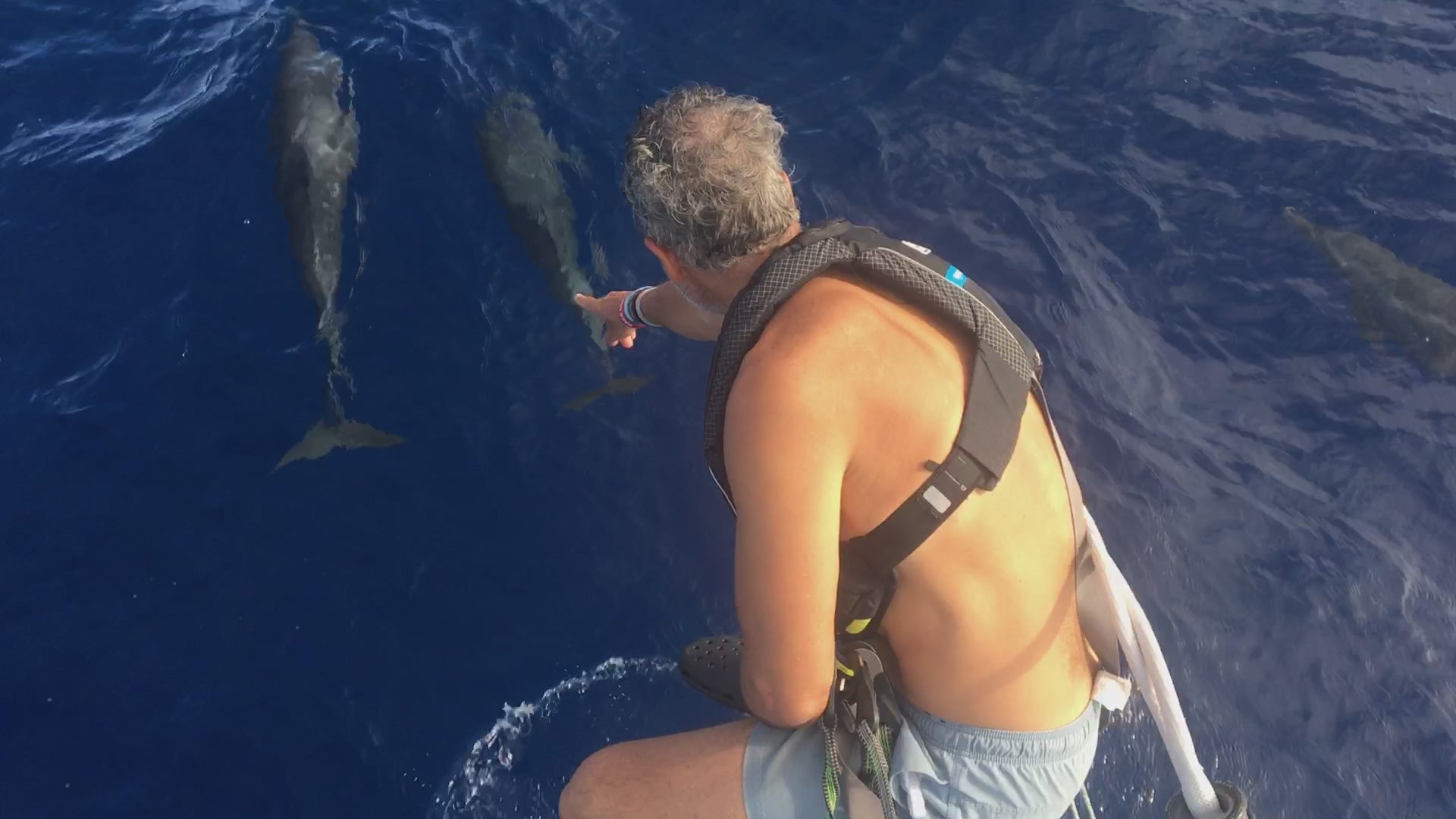 What often helps the crew through tough periods such as this is the wildlife, from comical flying fish and squid landing on deck, to stunning phosphorescent dolphin shows and elusive whale sightings that break up the days. Sophie Cross, Zhuhai crew member, during the race to Punta del Este, wrote: “Sailing this massive yacht during the night is one of the most amazing things I have done in my entire life. At the start of every night, without fail so far, we have seen the most spectacular sunset. The best was yesterday evening when a pod of dolphins decided to join us for dinner. They are somewhat even more spectacular when they follow us at night when you can just hear them gliding past, occasionally catching a glimpse of them from the moonlight.”