After arriving safely and swiftly into the Uruguayan resort of Punta del Este, following a 5,200 nautical mile-long marathon across the Atlantic Ocean, a fantastic evening of celebrations and formal Prizegiving was laid on by hosts Yacht Club Punta del Este. 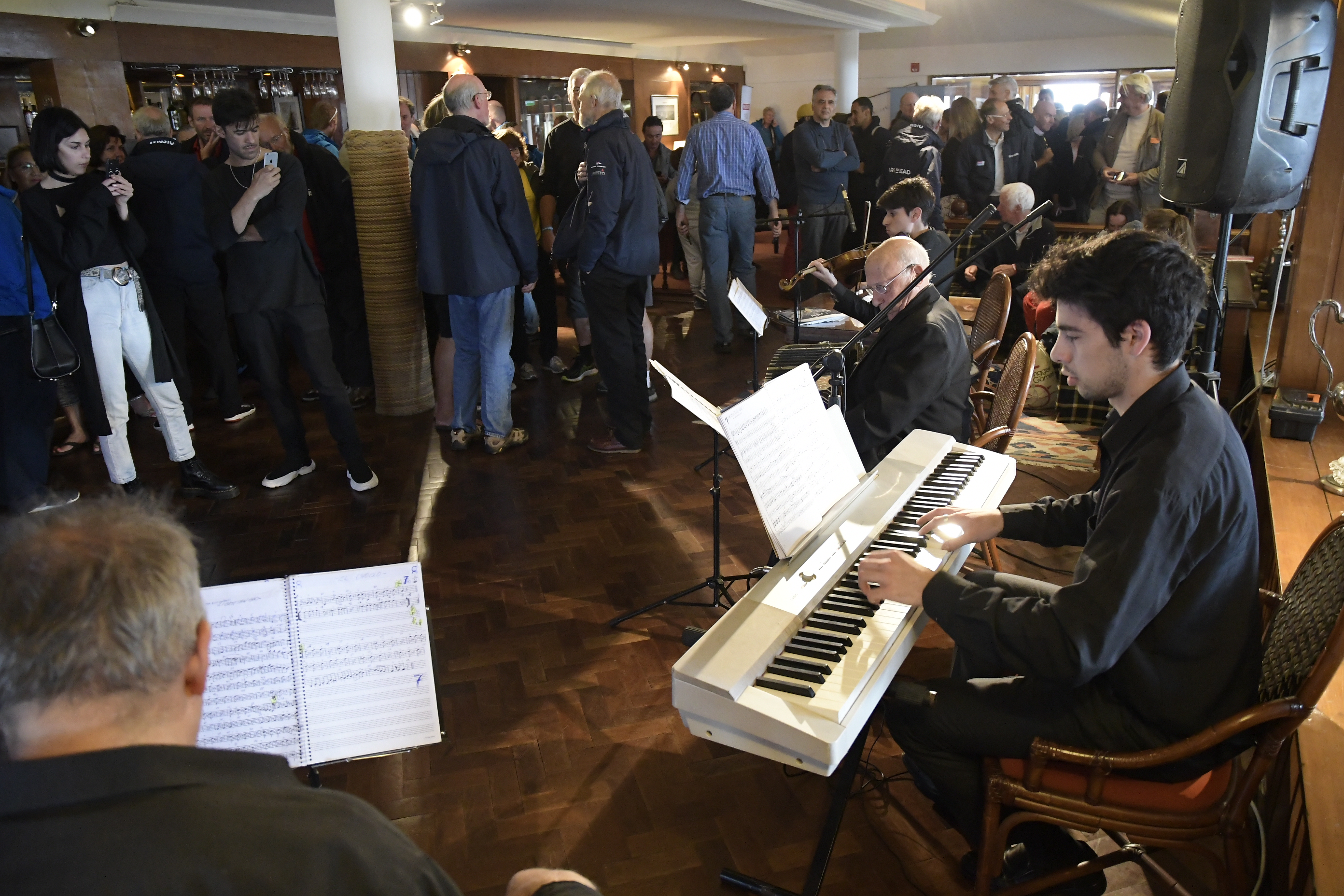 IMAGE: The crew gather, whilst being entertained at Yacht Club Punta del Este

Race 2: The Commodore’s Cup saw 220 Clipper Race crew, who come from all corners of the globe and walks of life, push themselves to their physical and mental limits through fierce storms and extreme heat whilst racing each other to South America.

The Prizegiving ceremony got underway at the beautiful Yacht Club Punta del Este clubhouse and kicking off celebrations was Commodore Juan Etcheverrito who extended a warm welcome to his visitors, saying: “Thank you to everyone for coming to our club." Sir Robin Knox-Johnston, Chairman and Founder of The Clipper Race said "I'd just like to add, about the club; they are really good friends to me, I first came here nine years ago and I'll always remember their friendliness. It was a wonderful reception you all had coming in!" 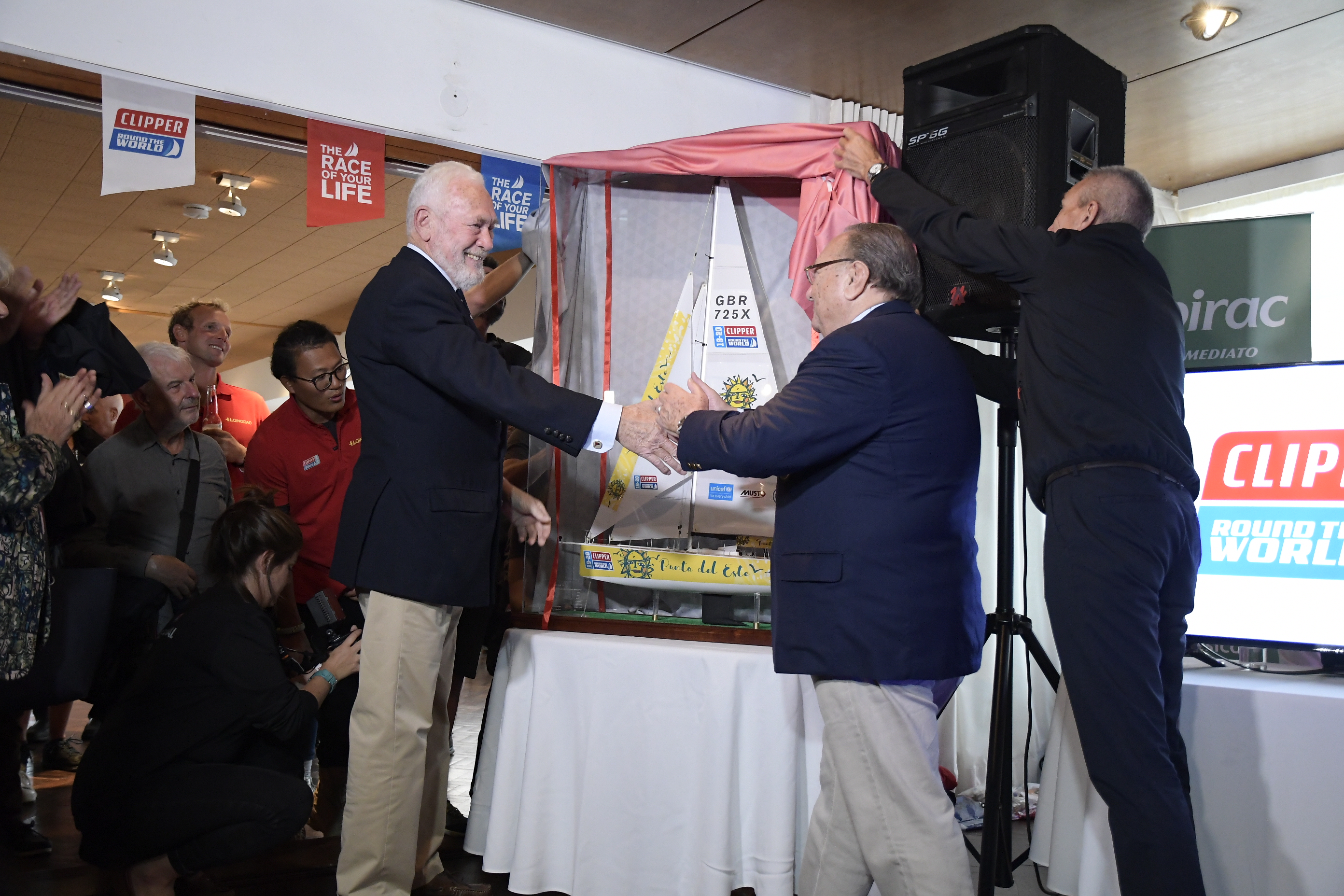 IMAGE: The Commodore being gifted with a model Punta del Este yacht to commemorate the occasion.

Yacht Club Punta del Este, which is playing host to the Clipper Race and has a debut team entry Punta del Este, has a rich and fascinating 95 year history. In addition to being the leading ocean sailing hub of South America, the club plays a significant role in the development of the sport and in individuals who sail - from dinghy to large yachts.

Before formal Prizegiving got underway, 48 Race Crew who will be leaving the race after completing Leg 1, the first of eight legs, were called to the stage to celebrate their remarkable achievements. 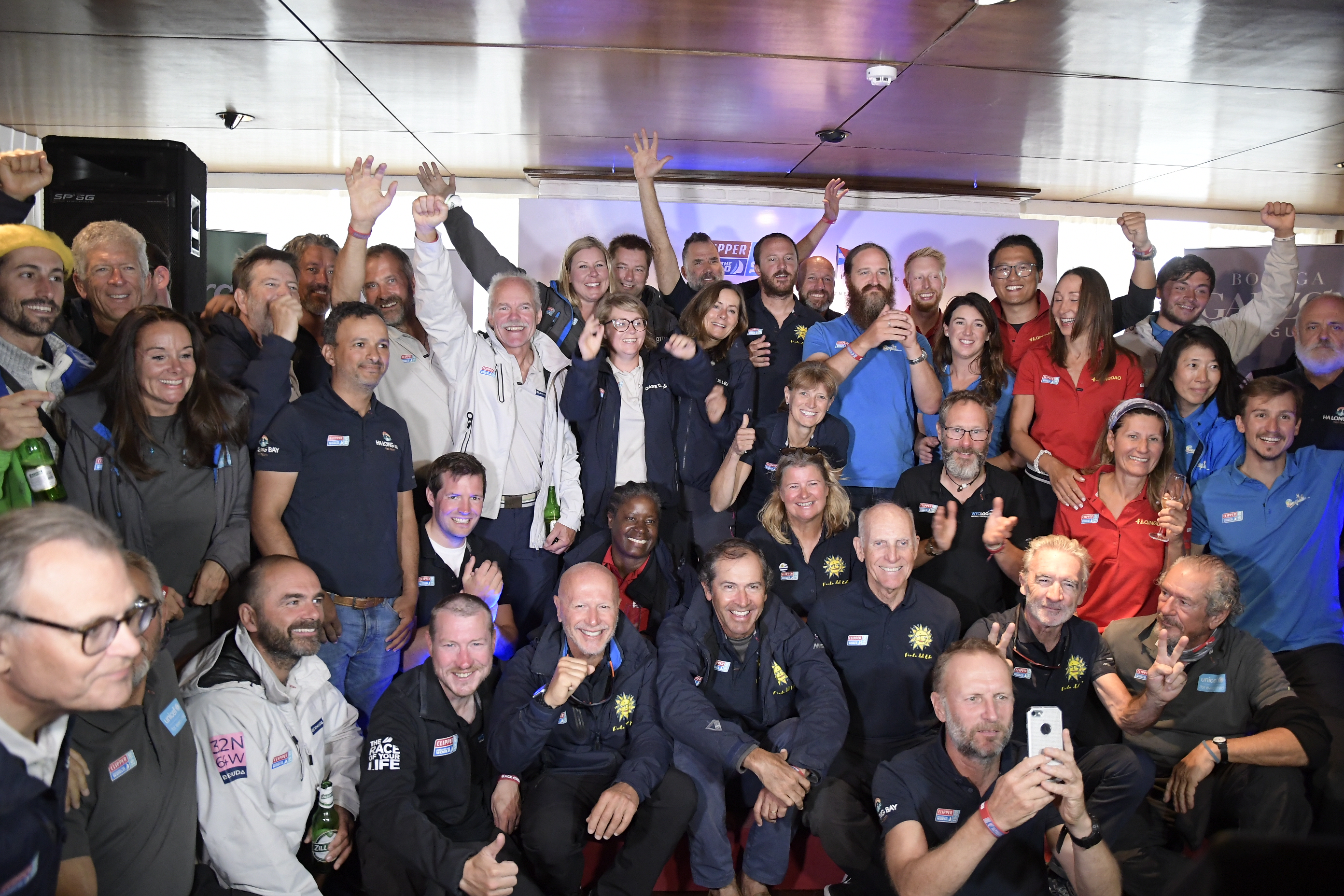 Clipper Race Director, Mark Light, proceeded to announce the race’s official charity fundraising progress, revealing an impressive £148,198.67 has been raised for Unicef UK by crew and staff. Aptly, the Unicef team currently sit at the top of the fundraising leaderboard having already raised over £50,000. The Unicef Charity Champion award for Leg 1 went to Holly Williams, on Unicef, who has raised over $10,000 for the charity. Holly has been awarded a place on the first Unicef project visit when she reaches Cape Town in November. 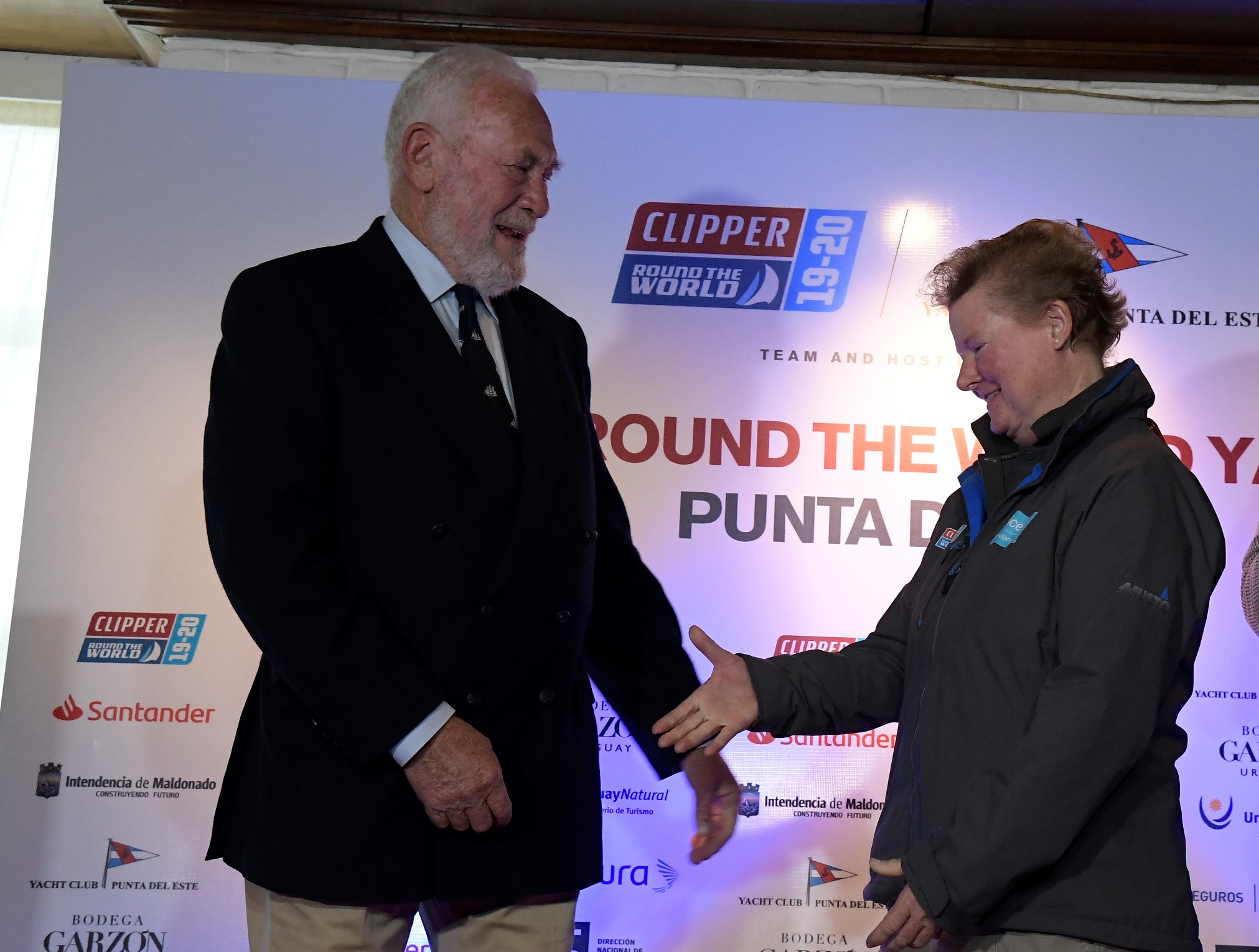 The media award for best crew image taken on board during Leg 1 went to Ha Long Bay, Viet Nam crew member Muriel Jestin for the “Big Wave” photo during Race 1 and the stunning lightning footage in the closing moment of Race 2.

Muriel said “I am so pleased to win the prize, I was secretly wishing to win but I had no idea what the other boats produced so I didn’t expect it but I am so very pleased.”

After the results of the Dell Latitude Rugged Ocean Sprint and the Scoring Gate were confirmed, it was time for the podium placed team to take to the stage and claim their winning pennants.

In third place, Josh Stickland, Hugo Picard and the crew of Ha Long Bay, Viet Nam were presented their prize by Punta del Este Head of Port Carlos Ferreira. It was the first time the team has taken to the podium and in addition to third place, the team take three bonus race points; one for coming third in the Scoring Gate and two for second place in the Dell Latitude Rugged Ocean Sprint. 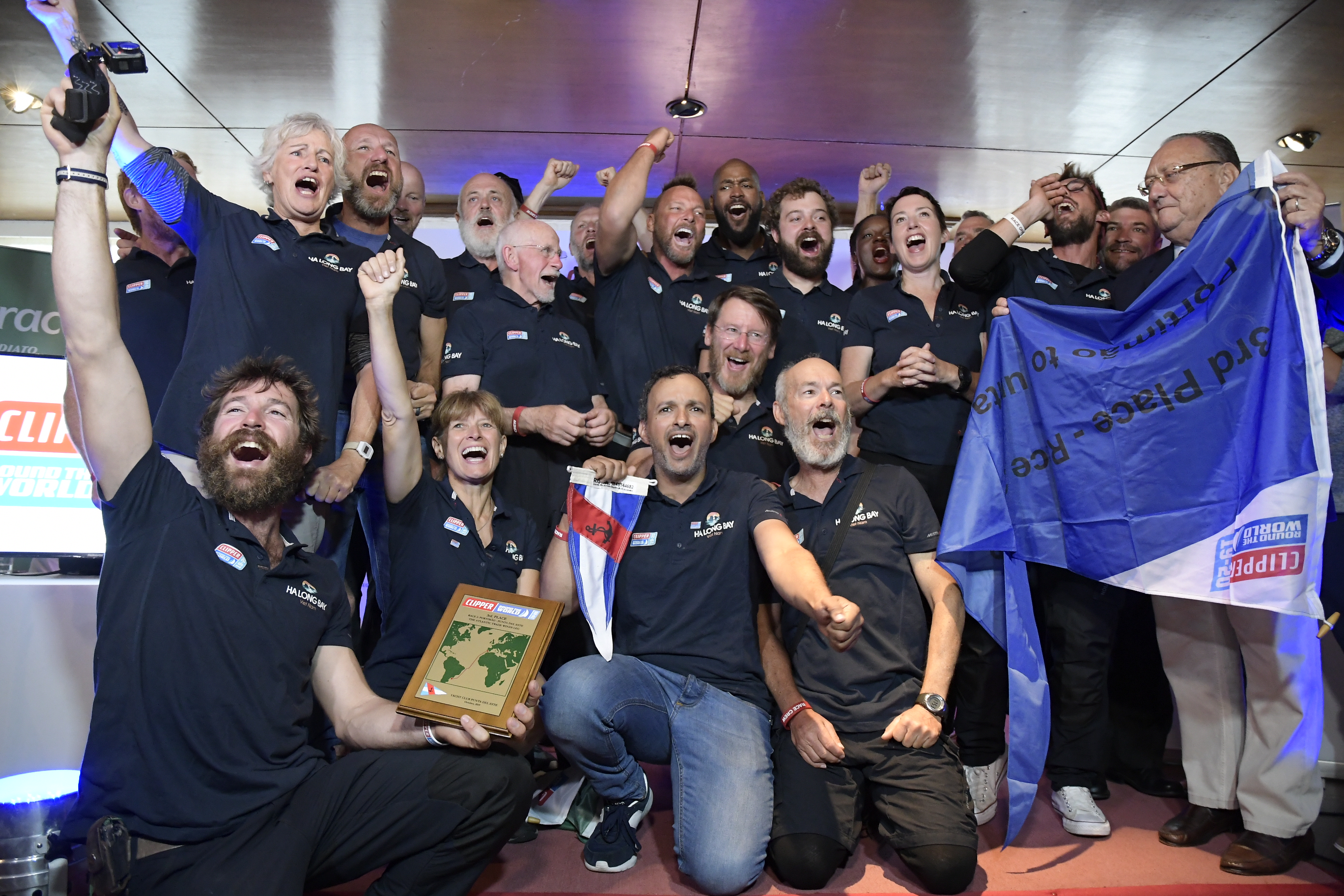 In second place, the Visit Sanya, China team, led by Seumas Kellock and Jorge Infante-Llorca, were presented with their race pennant by Mr Enrique Antia, Mayor of Maldonado. The team walk away with four more bonus race points; one for the Dell Latitude Rugged Ocean Sprint and three for winning the race to the Scoring Gate. 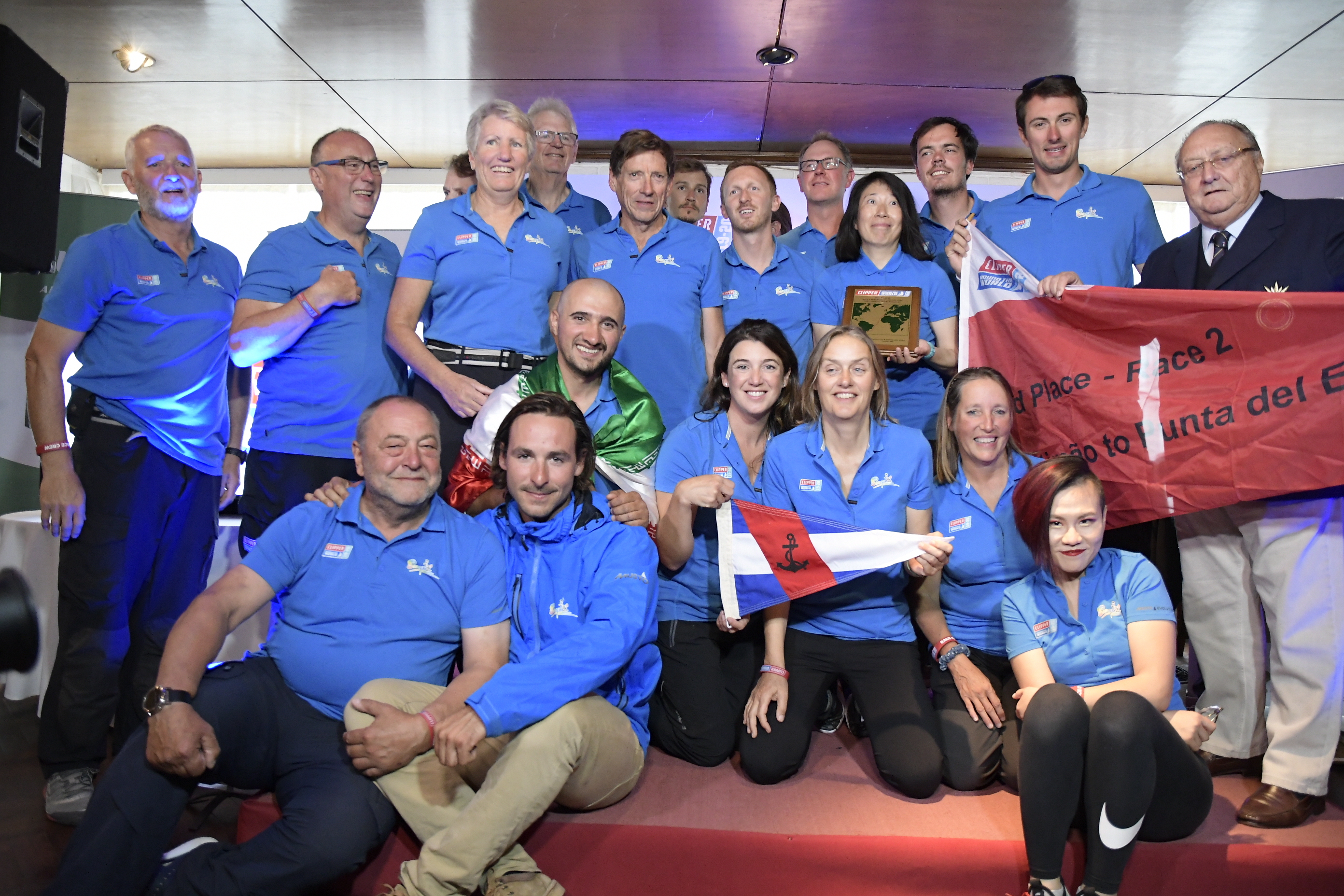 And finally, receiving the loudest cheers of the evening, the Qingdao team took to the stage to be presented with its first place pennant by Commodore Juan Etcheverrito. The Qingdao team doubled its total race points by playing its Joker card; a tactical mechanism that doubles race points but can only be activated for one race in the entire circumnavigation. In addition to scoring the full 22 points, the Qingdao team gained an additional two bonus points for placing second at the Scoring Gate.

Going into the second leg of the circumnavigation, Qingdao sits at the top of the overall leaderboard with a significant lead. Punta del Este and Visit Sanya, China are jostling for the other two podium spots and are closely followed by Dare To Lead. The full leaderboard can be viewed on the Clipper Race Viewer. 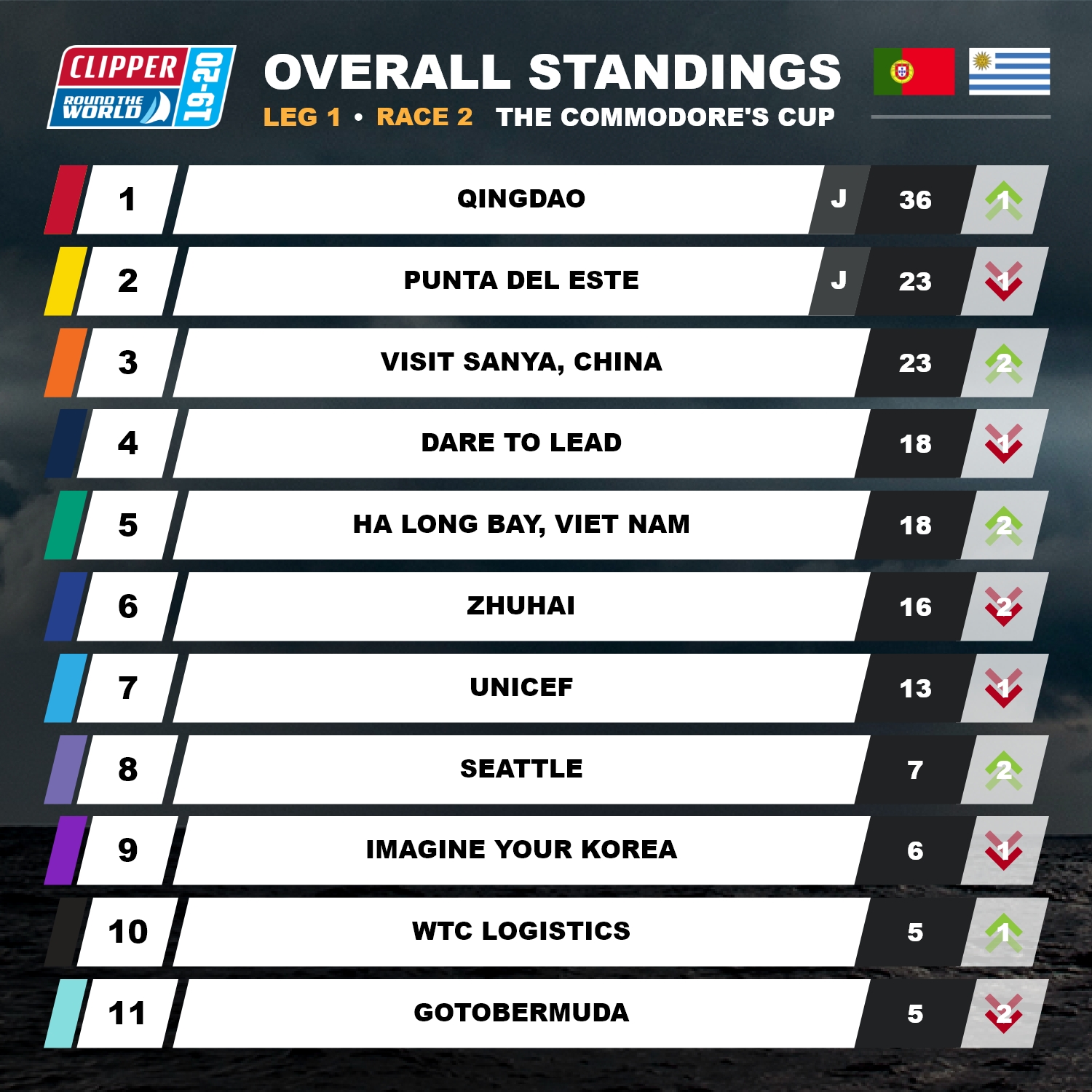 With the Punta del Este stopover in full swing, the crew will be enjoying cultural and traditional activities including tango dancing, an asado and Team supporter Garzon hosting wine tasting, whilst the fleet of identical 70-foot racing yachts will be open for free public tours. Head to the Punta del Este Port Page on the Clipper Race website for more information.

All eleven yachts have now completed the 5,195 nautical mile race from Portimão, Portugal to Punta del Este, Uruguay, which…