“It is the knocks you get in the process of living that make you the person you are – that and determination I think in my case!” says Rose Todd, a 59 year old Conservation Officer from Oxfordshire taking part in the full circumnavigation in the 2017-18 edition of the race.

Rose, who has just completed her Level 2 training is no stranger to the Clipper Race, having already taken part in Leg 7 and 8 of the 2013-14 race.

With no previous sailing experience before first signing up for the race four years ago, Rose explains why she is back for more and this time, to take on Mother Nature in all her glory for 11 months across 40,000 nautical miles of the world’s oceans.

She says: “I am fortunate to have had four inspirational children; Tom, Harry, Molly and Flora. My son Harry was born with multiple special needs. In fact more or less the first thing the doctors told me was that due to an inoperable heart condition he only stood a 50% chance of making it to his second birthday. Fortunately Harry hadn’t read the script and despite being almost constantly unwell and undergoing a series of less, or more, successful heart operations to alleviate some of his health problems, he sailed through the landmark of his second birthday...and subsequent birthdays. Harry was a fighter.

“What having a disabled child taught me was to grab life by the horns and live it. Harry might not have been able to do as much as other children his age but he loved life and lived it to the full. He had a talent for making other people feel special.

“My daughters were no less inspirational. They were, and still are, talented windsurfers and sailors and I would stand on the shore with Harry watching them wishing that I might have a chance of some of that excitement you get from being on the water.

“Harry died when he was 18. The last 19 months of his life I cared for him alone without support. It is an incredibly isolating and lonely place to be. Shortly after Harry’s death I had reason to go to London and saw the Clipper Race advertisements in the Underground extoling the reader to Achieve Something Remarkable. “I can do that!” was the thought that went through my mind, followed by !I can still do that!” when I watched some of the YouTube footage of the race. I signed the contract to participate in Legs 7 and 8 in the 2013-14 race on the anniversary of Harry’s birthday.

“Sailing on board Jamaica Get All Right was a revelation – I really could do it! But as much as I had enjoyed the experience at the end of the race I felt it had ‘only’ been half an adventure. 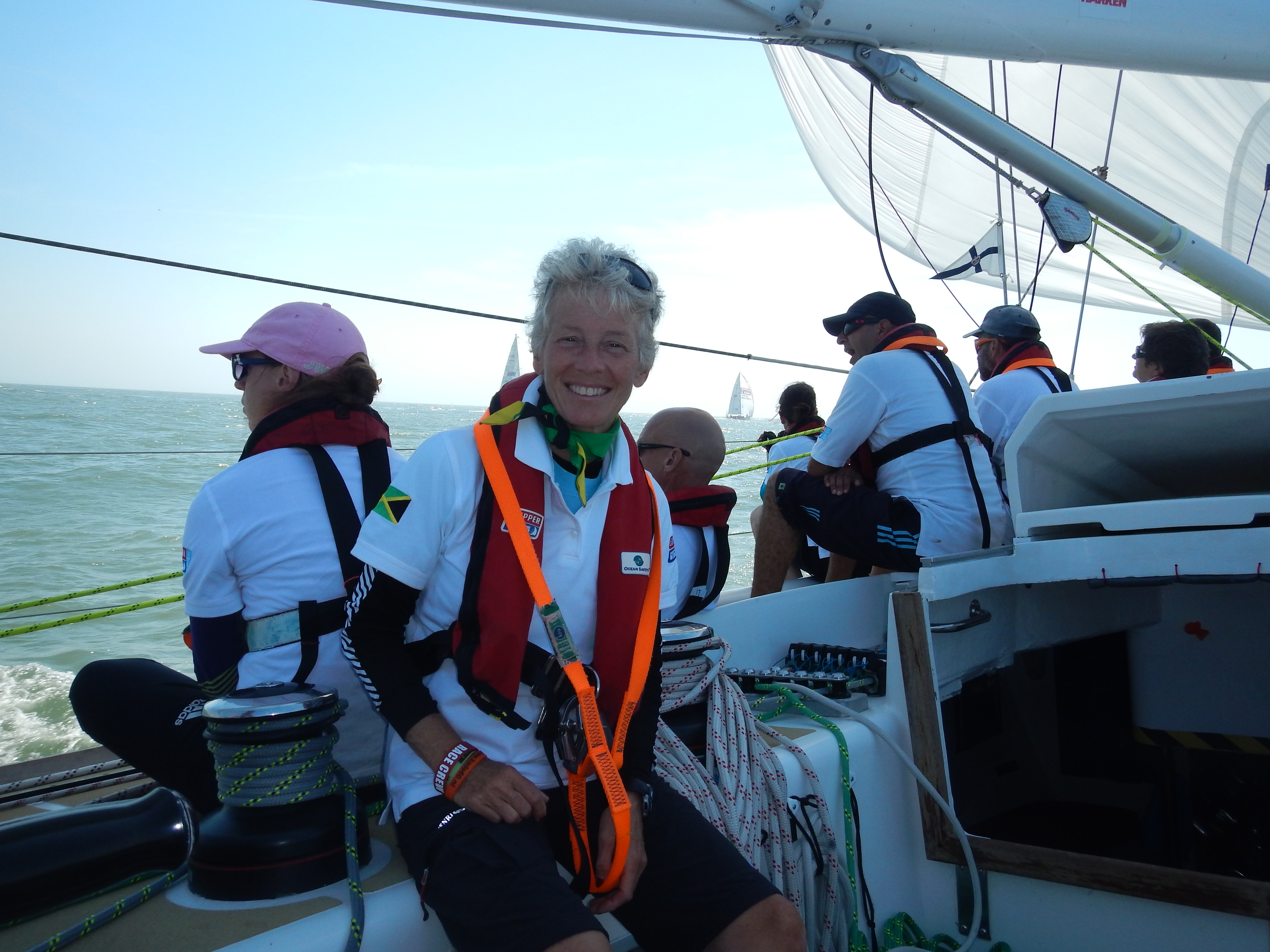 “Coming back from the race I got involved with Sailability in Oxford. Sailing is a fantastic opportunity for all sorts of people. Not everyone has the ability to sail round the world but people are entitled to have an adventure to a level they can cope with.

“I have loved doing the training again. New people, new challenges. There is always the opportunity to learn something new. I am very competitive – mostly with myself – I want to be the best I can be. I cannot tell you how much I am looking forward to the race.

“A quirky little thing I did on the last race that I will be going on board this race, was to take some expensive perfume and then when you are feeling a bit down and un lady-like and smelly on board, give yourself a good spritz of perfume and pampering to make you feel a bit more special!

“The Clipper Race gives its sailors an opportunity. If you want to change things then do something different. I want to live my life rather than sleepwalk through existence. I realised that because of the situation I had been in I had lost my confidence, my hopes and aspirations had melted away and I had settled for less than I deserved. Learning to sail (I had never been near an ocean-going yacht until 2013) gave me back my self-worth and reignited my sense of adventure – both of which, I imagine, will be tested in extremis in the race to come.

“I will be at the 20th Anniversary Ball on the 2017-18 race table. I think the Clipper Race has something to celebrate, it has done wonderful things for so many people giving them an amazing opportunity that they wouldn’t otherwise have. You really do feel like a fraternity, it’s a genuine feeling I have a lot to thank the Clipper Race for.”

There are still places available for the 20th Anniversary Ball. Click here to find out more about the night and how to join Rose plus crew and Skippers from all ten previous race editions, and celebrate our double decade of ocean racing.

The 2015-16 edition of the race may have only just ended, meaning almost twelve months until the 2017-18 race gets underway but crew training is already in full swing. 455 crew are already signed up for the next race and are being put through their…

The Race of Their Lives 2, the documentary series following the Clipper 2015-16 Race will air on Sky Sports…

For the past three years, whilst not travelling the world fulfilling his hands on role as Clipper Race Chairman, Sir Robin Knox-Johnston has spent the bulk of his waking hours painstakingly and personally restoring his long-term passion project, Suhaili. This week, more…

With the 2016 sailing calendar in full swing, we welcome the friendly face of Emily Bambridge to the team to…