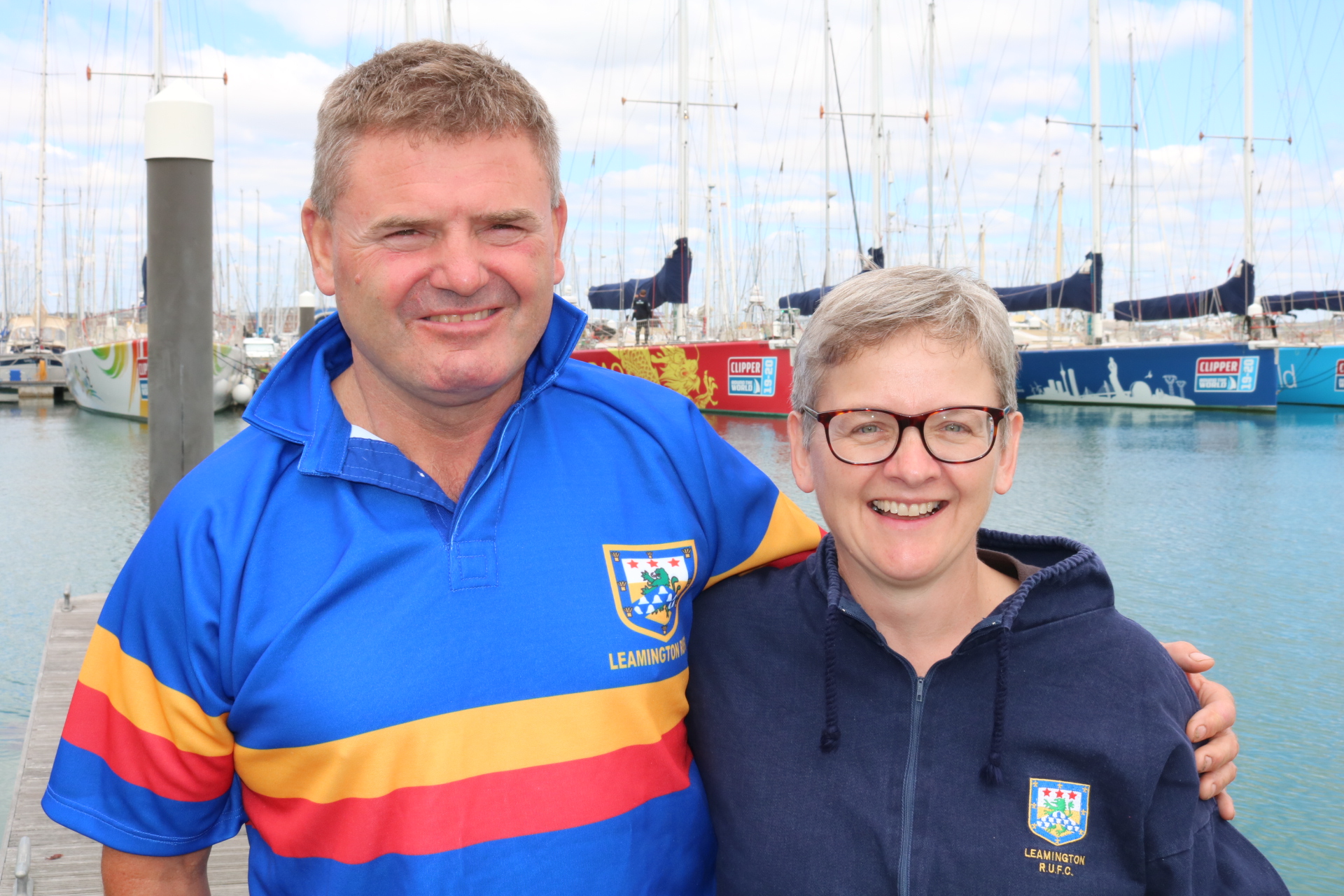 The Clipper Race brings together people from all walks of life to compete side-by-side in the toughest endurance test on the planet. Taxi drivers rub shoulders with chief executives, vicars mix with housewives, students work alongside bankers, and engineers team up with rugby players - which, coincidentally, is what unites two Dare To Lead Race Crew; Marie O’Riley and Stuart Mace. 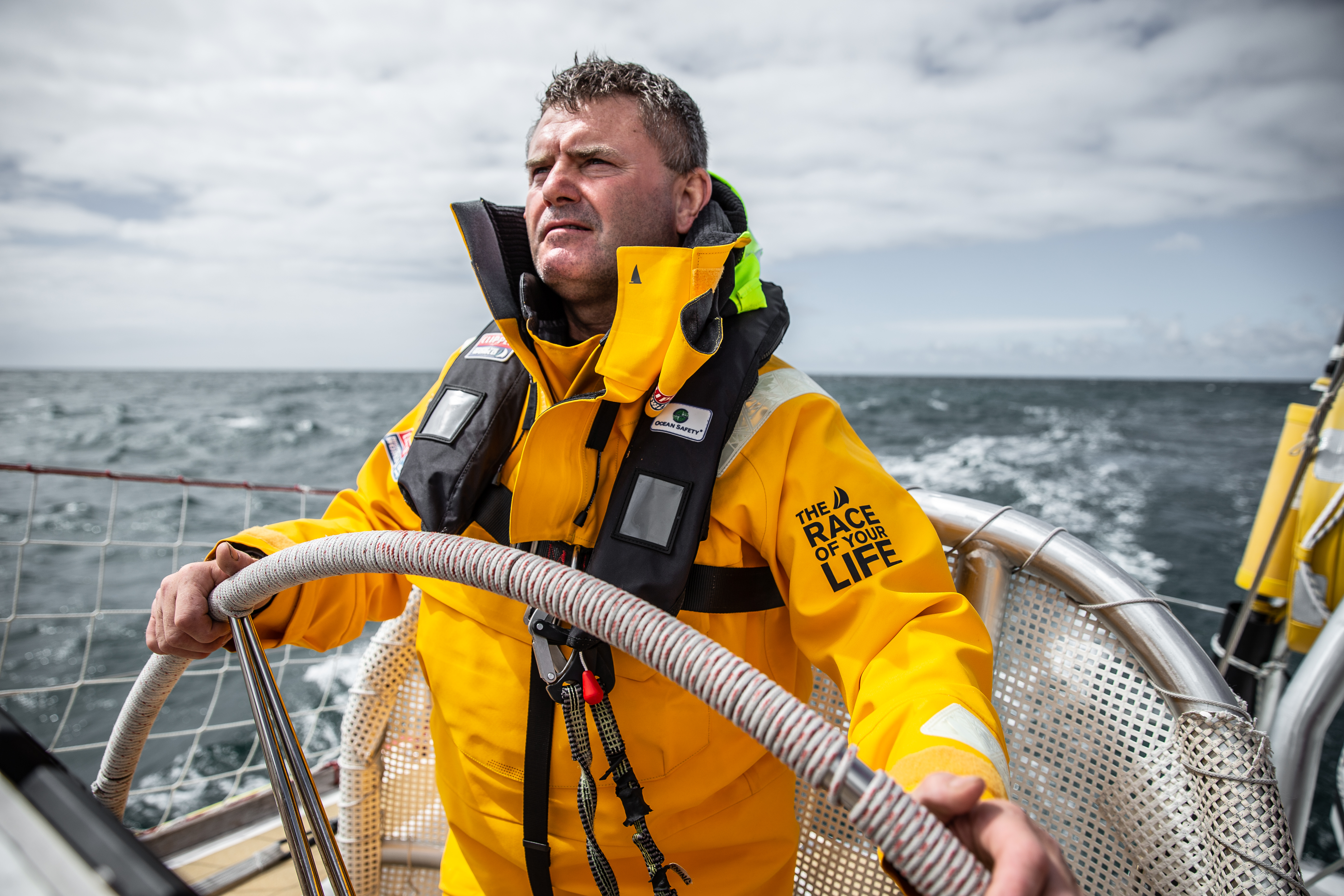 Stuart had been following the Clipper Race since his brother-in-law took part during the 2013-14 edition, and he is now gearing up to take part in the entire circumnavigation. For Marie, it was a chance encounter with a former Crew Member at Clipper Race Start whilst visiting family that ignited her Clipper Race ambitions. Marie says: “I was with my husband and two teenage daughters visiting family when I saw a post on Facebook about the Clipper 2017-18 Race which was starting the following day.

“We thought we’d pop down to Royal Albert Dock Liverpool to take a look and whilst there I chatted to Visit Seattle crew member Chrissie Jackson who told me she’d never sailed a yacht before signing up for the race. Chrissie also mentioned that her Skipper was 24-year-old Nikki Henderson, so I said I’d follow their progress in the race. 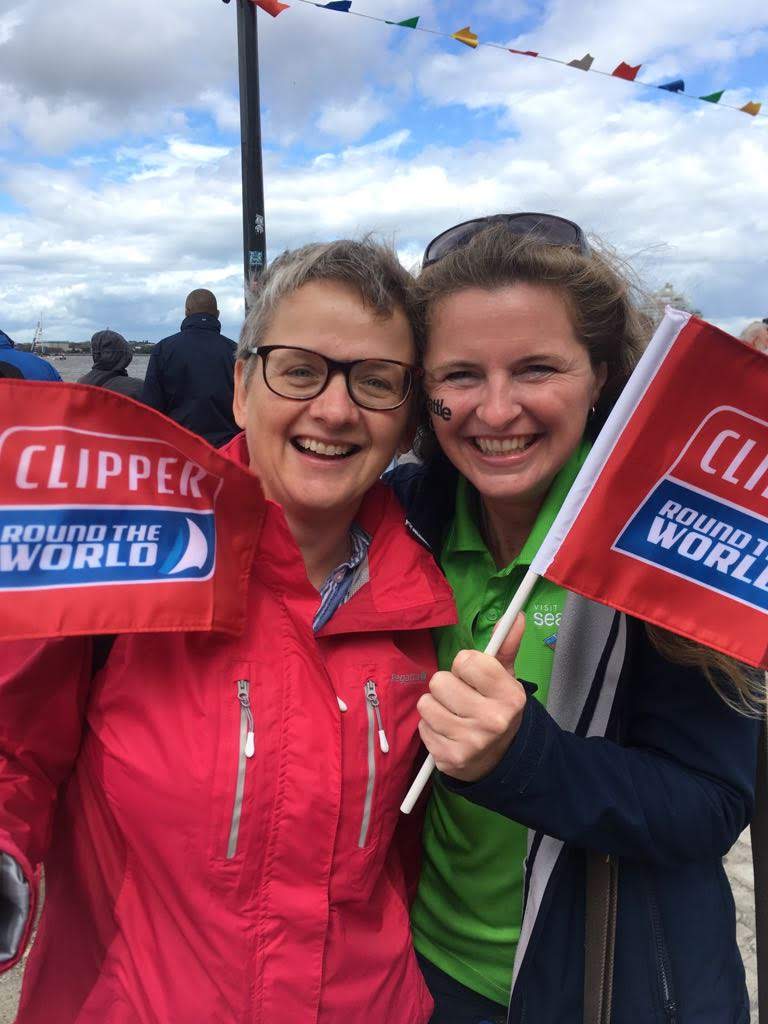 “I had previously said to Emily, my youngest daughter, that one day she could do it as she’d enjoyed sailing with 2nd Warwick Sea Scouts, but after a couple of months reading the daily crew blogs, and following race tracker, I was hooked. I mentioned to my husband Mike that I’d love to do it to which he replied, “Go for it!”..”

It wasn’t until both Marie and Stuart joined the Clipper 2019-20 Race crew Facebook group that they realised there would be a familiar face on board their races. Stuart explains: “I played rugby at Leamington Spa rugby club with Marie’s brother, and her father played a big role at the club, too. Marie supported the club at home games. I only realised she was also taking part when I logged onto the Clipper 2019-20 Race Crew Facebook group." 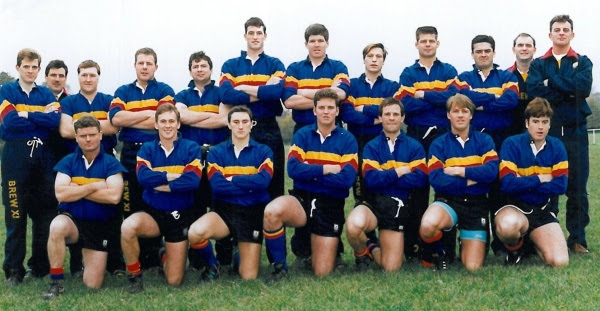 Image: Stuart, front row on the left, during his rugby playing days.

Marie has been connected with the club since an early age. She explains: “My late father John Oxenbould was Chairman of Leamington RFC for many years so my brother and I would spend every Saturday during the rugby season at the club playing with our friends.

“I always fancied playing rugby but in those days, girls didn’t play mini rugby like they do today. In my early thirties I moved back to Leamington after living and working in Oxford and I ended up playing for the 2nd team at the Old Leamingtonians RFC.”

Stuart added: “I stopped playing around 20 years ago, but played at the club for around 15 years and most of it in the 1st Team. I moved away from Leamington around 15 years ago but still talk to the guys on Facebook.”

Marie adds: “We have a lot of mutual friends on Facebook so when a Stuart Mace appeared in the Facebook group in April 2018, I sent him a direct message saying “Macie – is that you?”

“I was thrilled at Crew Allocation to discover we are both on the same team with Guy Waites as our Skipper.” 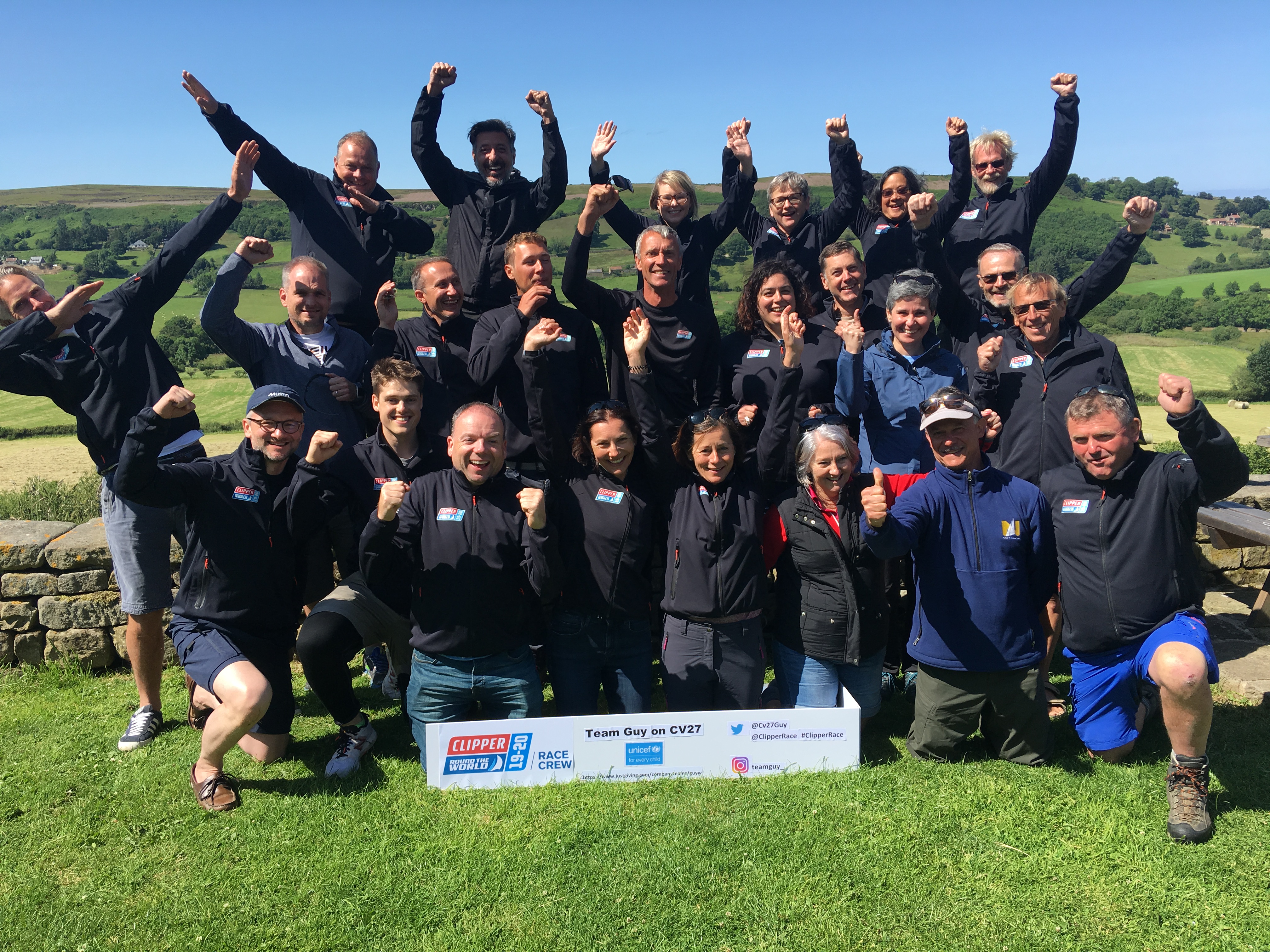 Image: Dare To Lead team during the Team Building Weekend, with Skipper Guy Waites in centre.

Both Marie and Stuart had minimal sailing experience prior to signing up to the Clipper Race, though both have now been completing each of the four compulsory levels of training ahead of Race Start on 1 September this year.

On training, Stuart says: “The training is amazing, I have trained with three Clipper Race Skippers and the knowledge they pass on is second to none. The crew you meet become lifelong friends and since starting my training I have raced in some RORC races, too.”

Marie adds: “Training has been exhilarating, frustrating, fun, hard work, amazing. I’ve loved every second of it (baring a couple of episodes of seasickness which fortunately I’ve got over quickly). The training skippers and mates are brilliant and very patient with novices like me.” 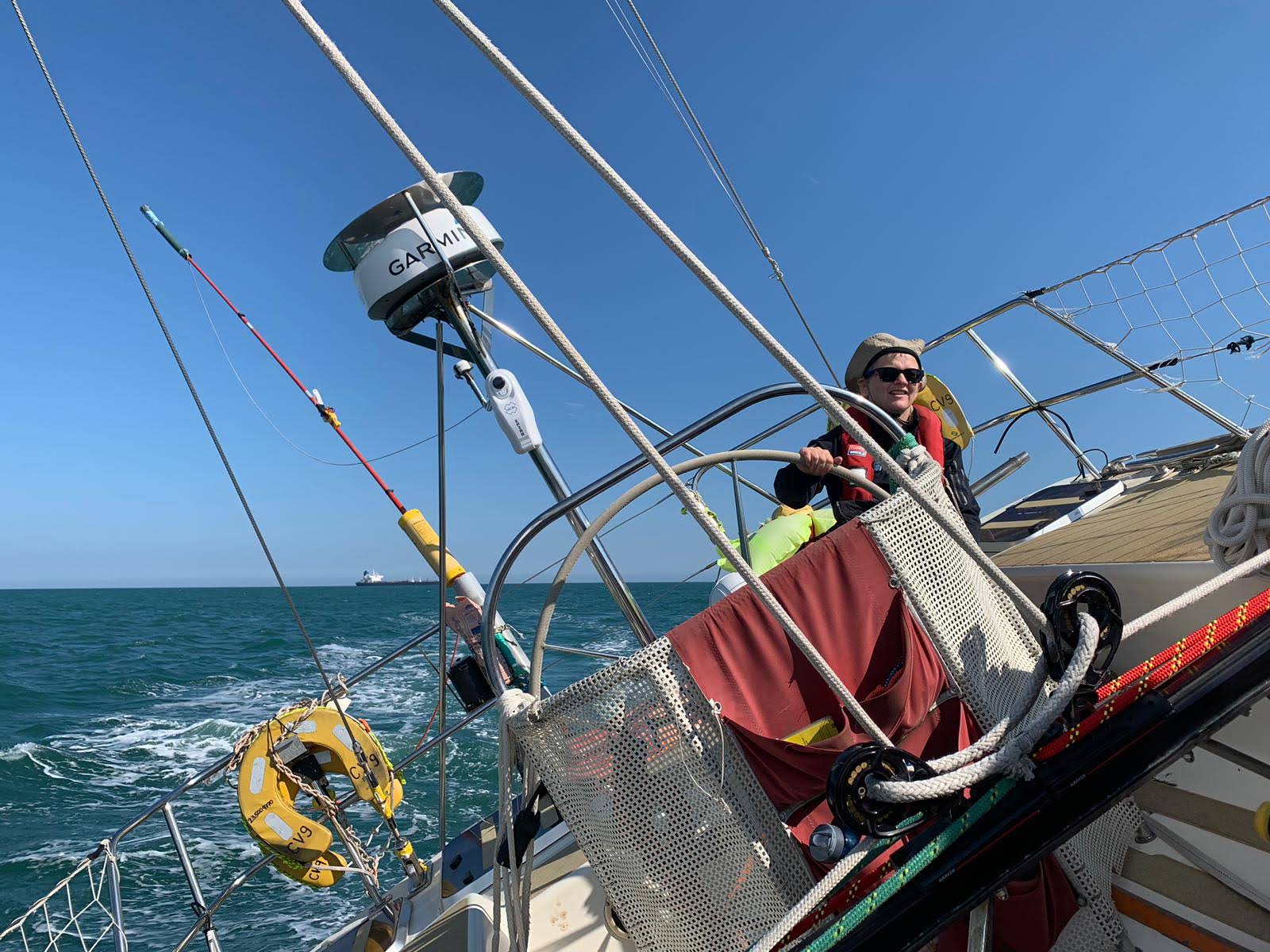 When it comes to friends and family, it certainly sounds like Stuart and Marie will have a big following. Stuart says: “My family and friends think I am mad but amazed by it all at the same time”

Marie’s family and friends can’t wait to join her on the exciting Leg 8 route. She says: “I love the look of the stopovers on my Leg. My family hopes to fly out to see me off in New York. The race leaves Bermuda on the morning of my 55th Birthday which I look forward to celebrating with a Guinness in Derry~Londonderry. I can’t wait to motor up the Thames into London where my family and friends will be coming to watch our homecoming.

I wonder how I will cope with being away from my family for so long. I know I’m going to miss them and all my friends. Also, I’ve never sailed across an ocean before so can’t imagine what it’s like to be so far from land. My friends either think I’m mad or as one told me recently, they think it’s an amazing adventure and they are all a little in awe of it.”

Inspired by Marie and Stuart? Hit the button below to find out more about being a part of the toughest endurance challenge on the planet.

Host Port destinations that will form the penultimate ‘US Coast-to-Coast’ leg of the Clipper 2019-20 Race along with its momentous ‘Atlantic Homecoming’ Leg have been revealed today.Firm race route favourites, Seattle, New York and Derry~Londonderry, have been announced as…