“It’s key to have the right sail up at the right time. The Clipper 70 is huge so changing a sail is not a quick process and you need to be confident that you have made the right decision. In such a close race like the Seattle Pacific Challenge that is what is going to help you win,” says Qingdao Leg 4, 5, 6 and 7 crew member Lindsay Rozelle Crawford, lent over the team’s mainsail in the sail repair hangar in Seattle.

Ask any crew member and they will tell you that the sails are the all-important additional crew member on board. Always on watch and powering the fleet, each of the twelve Clipper 70 yachts carries a wardrobe of eleven different sails. These are of varying weight and size to match the different wind strengths and conditions experienced. The mainsail alone comes in at 250kg.

Like the circumnavigating crew, the wardrobe of Hyde Sails has clocked up more than 30,000 nautical miles over the past eight months of the race and has endured the testing conditions of the mighty North Pacific Ocean. 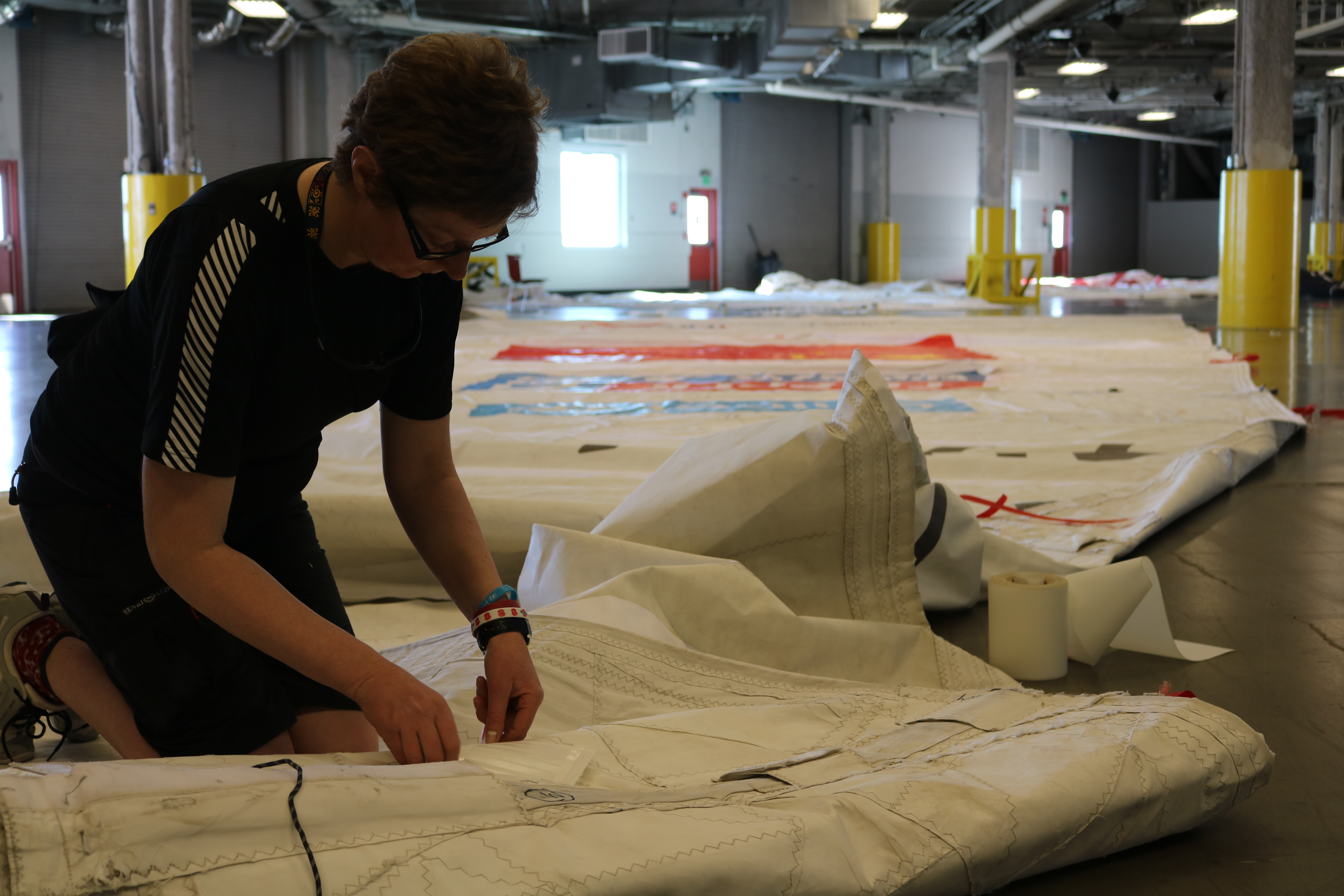 Speaking about the variable and harsh conditions the teams have faced on the race from her team’s home port of Qingdao, China to Seattle, Lindsay says: “I think because we were ready for big conditions we were really surprised when we got the sunny weather at the start of the race. But the wind soon picked up and what surprised us the most was the speed in which the wind increases in the Pacific. We were in a steady 20-30 knots and then all of sudden it would jump up to 70 without much warning so it was all hands on deck with lots of great teamwork.

“We definitely had a workout the first couple of weeks changing sails, that slowly dwindled as we created damage along the way but we had most of our sails up at some point. Being so far through the race they have had a lot of use and there are little things here and there that need replacing. On this race we had some small damage to our spinnaker which took three hours to repair. We try to fix our sails quickly to be able to use them again as soon as possible.

“It’s always tricky to lay the sail out down below to see where the damage is and then there’s the bouncing around, trying to keep in position to fix it as well as other people moving around on board sailing the boat.” 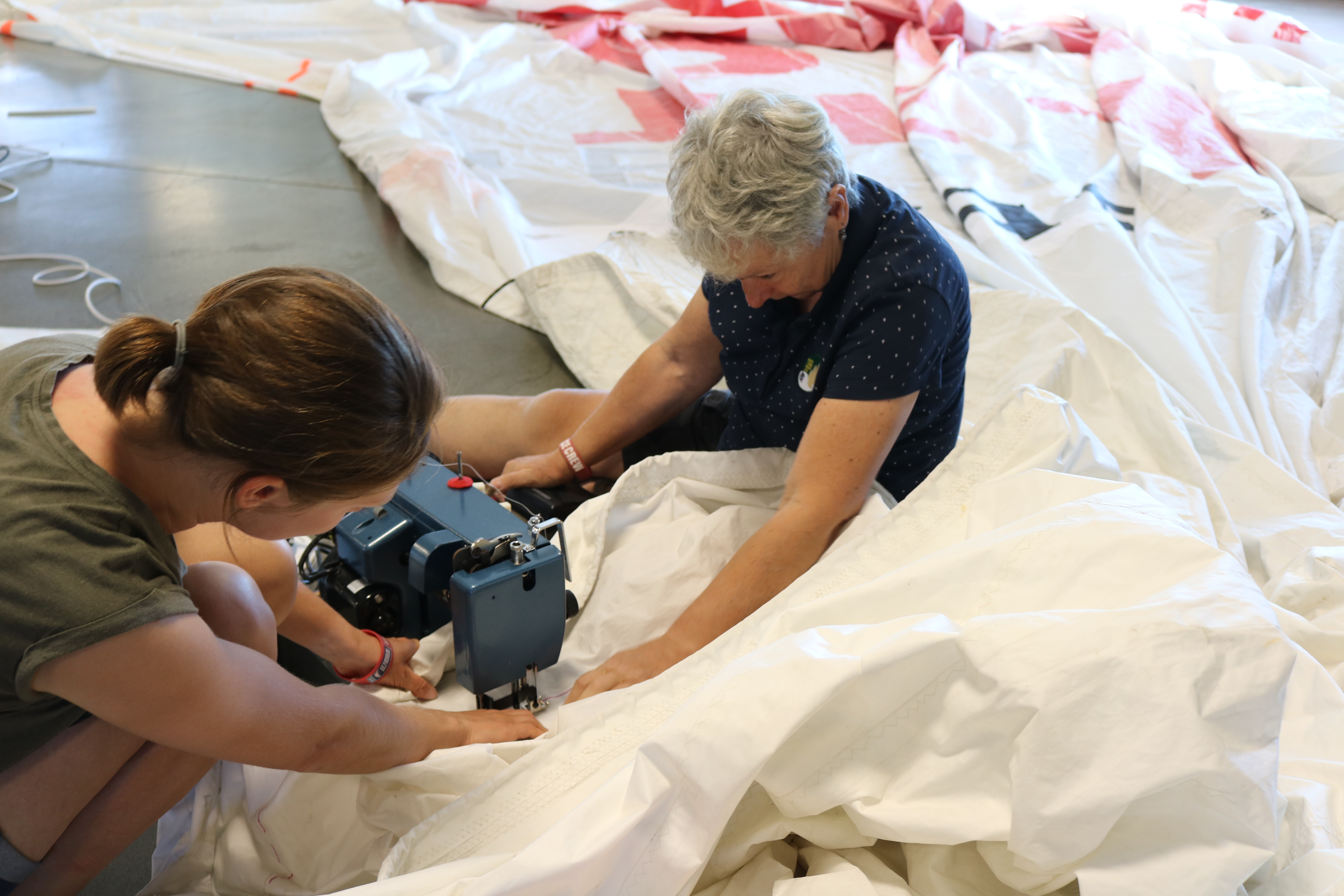 Hyde Sails is one of the largest sailmakers in the world, offering service and sales support in every region and its team works closely with crew offering pre-race support and advice on how best to care for and preserve the sails to avoid having penalty points applied for damage.

In total, the combined sail area across the entire fleet is 197,616 square feet. To lay all the sails out flat you would need an area the size of almost three Premiership football pitches, or 66 doubles tennis courts. 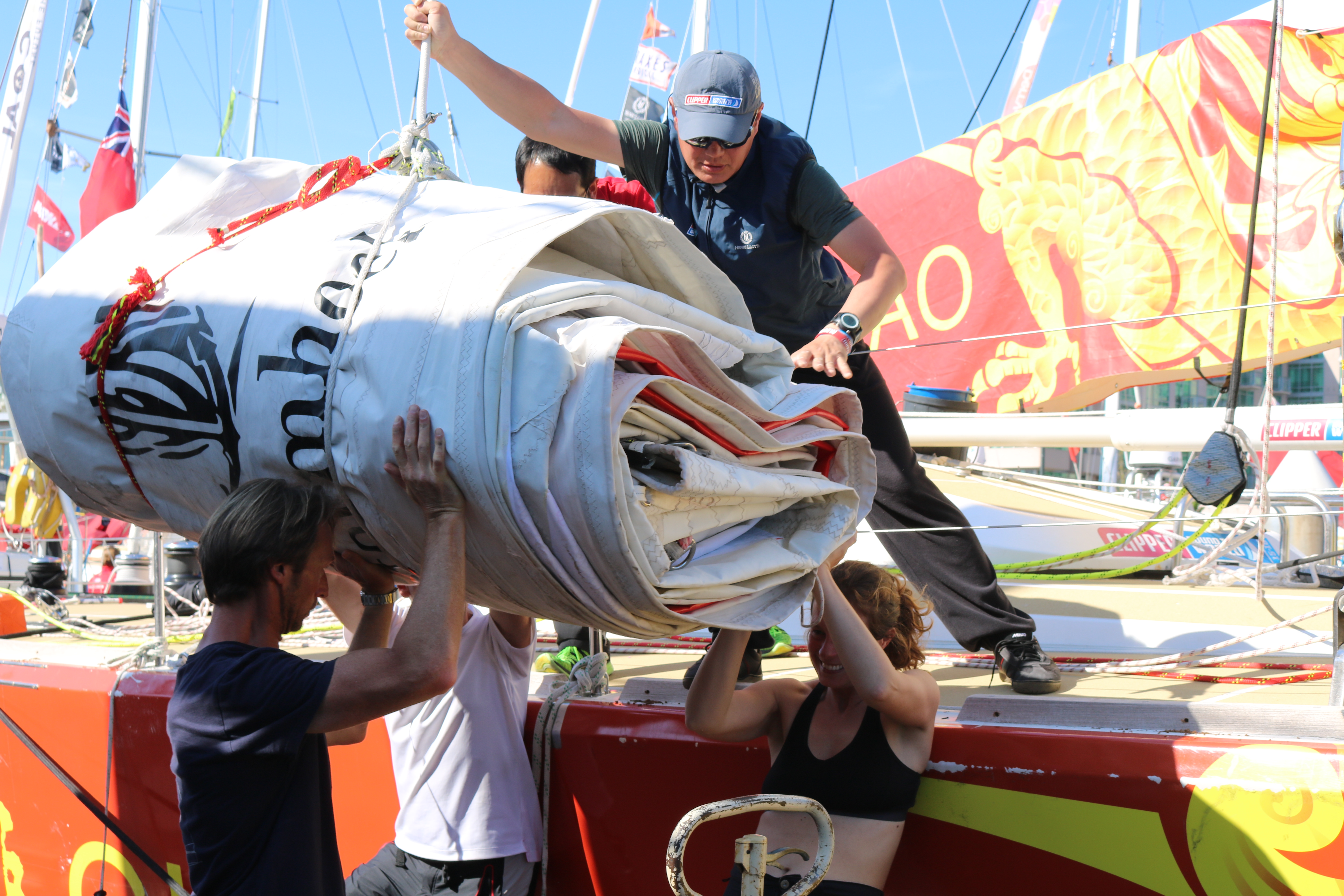 “When you get into port it’s really useful to have the space to lay the sails out to inspect and repair and to Have Hyde sails on hand to provide advice. It’s great to be with the other team’s sailmakers too to see if you are worse or better off and to get advice on how they may have fixed issues in the past. Here we have worked on the sails for about three days with three or four people working on them at one time. It’s a lot of hours and not the most comfortable job but it’s satisfying to see it finished and ready to fly again,” Lindsay adds.

Start your next adventure at www.hydesails.com.

Sailing home to Seattle, Mission Performance crew member and business owner Yuko Kikuchi, 40, has had an emotional reunion with her husband Takao after nearly a month at sea. Yuko, originally from Ishinomaki, Japan, a city devastated by the 2011 earthquake and tsunami, said she…