The realities of ocean racing are quickly becoming apparent to the Clipper Race crew as the fleet battles upwind on day two of the opening race from London to Portimão in Portugal.

The tough, wet conditions are proving a steep learning curve for the crew, though across the board, the Skippers have been full of admiration for how these non-professional sailors are handling their baptism of fire. Guy Waites says of his team on Dare To Lead: “The crew are coping enormously well considering the onslaught, life at a steep angle, managing Dare To Lead, and catering for our food and liquid requirements.

“We worked hard during the night and progress is good. No lack of spirit aboard.” 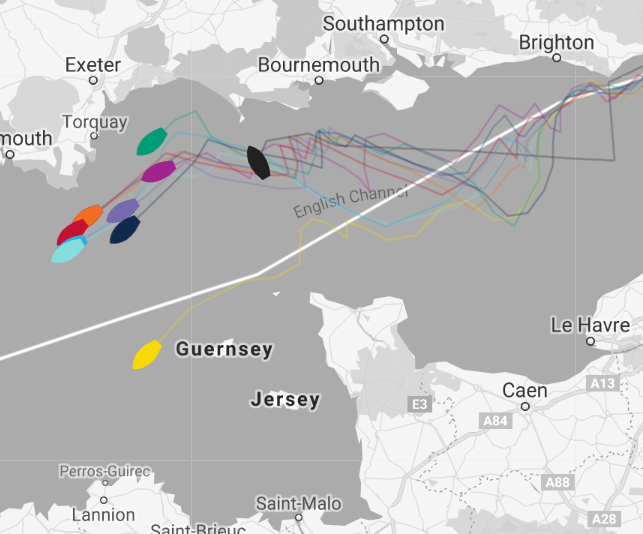 After the second night of racing, Go To Bermuda and Unicef are neck and neck on top of the leaderboard after turning south overnight. Unicef Skipper Ian Wiggin comments: “The wind was great - 15 knots from the west - which allowed us to keep training our upwind helmsmen while the tactical battle took off. We rounded the end of the Traffic Separation Scheme (TSS) exclusion zone off Eastbourne and were allowed full range of the Channel to play in. We headed south, towards Cherbourg, and it paid dividends, as we had ground out a small lead as the fleet came together off Lyme Bay.

“More beating upwind is expected today as the crew continue to grapple with the twin challenges of racing a 70 foot yacht whilst learning to live on top of one another at 35 degrees, with stuff flying everywhere and with most of their dry clothes now soaking wet.”

Qingdao, who set the pace for much of the first 24 hours, is on the hunt to regain the top spot in the standings. Skipper Chris Brooks reports: “We ran as much sail as we could throughout the night. Tough onboard and pushing really hard. Daylight graced us with the opportunity to settle the boat down again and lift the spirits of the crew. They are not professional sailors although they have been working with all the enthusiasm and hard work of such.”

Punta del Este has alone decided to follow the rhumb line and Skipper Jeronimo Santos Gonzalez says: “We continue our way west. The wind has been increasing to 34 knots with tide against wind, let’s say the sea is lively.

“The crew has experienced their first deck wash waves, getting everyone wet. We are committed to go along the north coast of France, let’s see in the next 12 hours if this pays off.”

The Clipper Race fleet is expected to arrive into Portimão between Sunday 8 and Tuesday 10 September and will be berthed at the beautiful Marina de Portimão. To learn more about this city in the heart of the Algarve, see the Portimão Host Port Page.

Want to keep up to date with the race to Portimão? Then tune into the Clipper Race Viewer to follow the fleet’s progress - less than 1000NM to go!

Following the spectacle and ceremony of the fleet’s departure from St. Katharine Docks, London, the first stage of the Clipper…