The two female skippers continue to dominate the leader board with the teams led by Nikki Henderson and Wendy Tuck in the top two positions as they begin the first Elliot Brown Ocean Sprint of the Clipper 2017-18 Race. Visit Seattle declared first, crossing the start latitude of 5°S at 1117 UTC yesterday but this does not guarantee the win. Differing from the Scoring Gate, the Elliot Brown Ocean Sprint points are awarded to the first three teams with the shortest elapsed time between two designated latitudes - for Race 1 this is between 5°S and 10°S. With three points, two points and one point awarded for the first three teams respectively any team in the fleet, no matter their position on the leader board, could declare the shortest time.

Visit Seattle Skipper, Nikki Henderson, reports: “It's been pretty tough conditions with bigger seas and higher winds… Naturally this all happens during the Elliot Brown Ocean Sprint which we started yesterday morning. It's been a brilliant opportunity for the crew to come together as one big team - with the watch system slightly jumbled to keep more weight on the high side and take our 45 degrees heel to 40 degrees.” 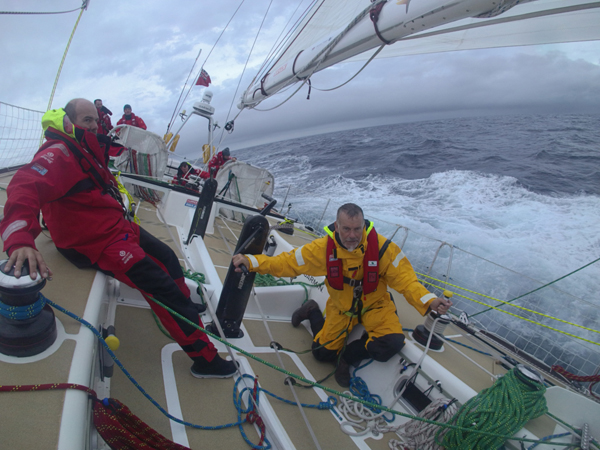 IMAGE: Life on an angle for GREAT Britain

Seasoned Clipper Race Skipper Bob Beggs, of third placed Unicef, is willing for a forecast containing some downwind sailing angles “We are now in the Race 1 Elliot Brown Ocean Sprint, but at the angles to the course and the present angle of dangle, there won't be any records set on this one.”

Reaping the benefits of its decision to leave the Doldrums Corridor on a more eastern track, HotelPlannner.com continues to put pressure on the top three. Skipper, Conall Morrison, said “We entered the Elliot Brown Ocean Sprint at 1749h UTC and since then have been trying to eek every last bit of speed out of the boat. The south-east trade winds are turning out to be slightly stronger than forecast and this does make the everyday things more difficult to do onboard.”

GREAT Britain remains in fifth place but, over the last 24 hours, PSP Logistics has moved up into sixth place ahead of Qingdao. Skipper Roy Taylor is pleased to be seeing the development of his crew in difficult conditions, as PSP Logistics continue to make good speed and progress towards Punta del Este. He said: “The crew on deck continue to keep the boat going fast and I continue to have as much rest as I need. I'm pretty much redundant now as the team run the vessel, consulting now and then or asking for a little guidance. It's a nice position to be in.”

Qingdao has slipped down the leader board but Skipper, Chris Kobusch, and crew are pushing hard and willing to go that extra mile to score some points. He reflects that: “The high speeds come at a price: living at a 35-degree angle. We have a few more days of heel ahead of us, before the wind swings more north easterly and we will be reaching again. One thing I am definitely looking forward to.”

Liverpool 2018 remains in eighth position ahead of Dare To Lead which has resumed racing in ninth after the successful medical evacuation of crew member, Jerry Stokes, to the island of Fernando de Noronha. Skipper, Dale Smyth, said: “We are hugely relieved to have Jerry safely ashore receiving professional medical care”. Though their diversion has given them a more windward course to sail, the crew on Dare To Lead are determined to do their best to remain in contention. 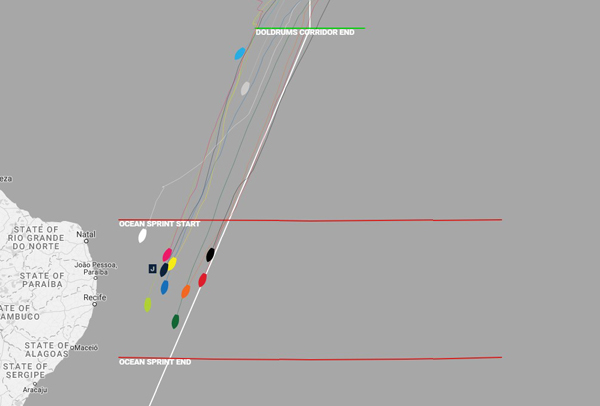 Garmin is further to the east in tenth place while Greenings in eleventh and Nasdaq in twelfth are yet to begin the Elliot Brown Ocean Sprint. On board Greenings the Relief Skipper, Dan Smith, reflects on a tough day saying: “The weather has been great - not too hot - but life at an angle is wearing.” Frustrated by being consistently slower than the leaders, he is focusing the team on sailing the boat as well as possible and working on doing the simple things well, he adds: “For now, the Greenings team are doing their very best with tricky conditions aiming to stay within our redress time of the leaders.”

Simon Rowell, Clipper Race Meteorologist, reports that the South Atlantic High is both strong and settled for now, and it is this which is keeping the fronts down south. With the next front around Rio de Janeiro in about four days’ time, apart from squalls, the fleet should continue to make good progress around the side of the High towards Uruguay. But it does mean conditions will continue to be tough.