Sanya Serenity Coast is on course to take line honours for the Atlantic Trade Winds Leg 1 as it is expected to be the first boat in to Punta del Este later today. Although it has a wind hole to navigate before reaching the Finish Line, it is over 80 nautical miles in front of the second placed PSP Logistics, and over 110nM in front of third-placed GREAT Britain.

Wendy Tuck, Skipper of Sanya Serenity Coast, reports: “We are getting nearer and the crew are starting to think back on what they have achieved, well nearly achieved - still a little wind hole to get through.

The most up-to-date ETAs can be found on our website and you can watch Sanya Serenity Coast and the rest of the fleet arrive in to Punta del Este by “liking” our Facebook Live page.

The boats behind are now maintaining good speeds into Punta del Este and PSP Logistics Skipper Roy Taylor explains: “We left our little wind hole this morning and soon we were tanking along under Code 2 (mediumweight spinnaker) at 11 knots plus and pointing directly towards Uruguay. We have maintained this progress all through the day and into the night.”

GREAT Britain Skipper Andy Burns is lamenting previous tactical decisions, saying: “I honestly thought our southern push would pay off but it's not looking favourable at the minute.”

However, having played its joker card for this race, GREAT Britain is expected to place highly on the leader board after double points and the two bonus points from crossing the Scoring Gate in second place are taken into account. 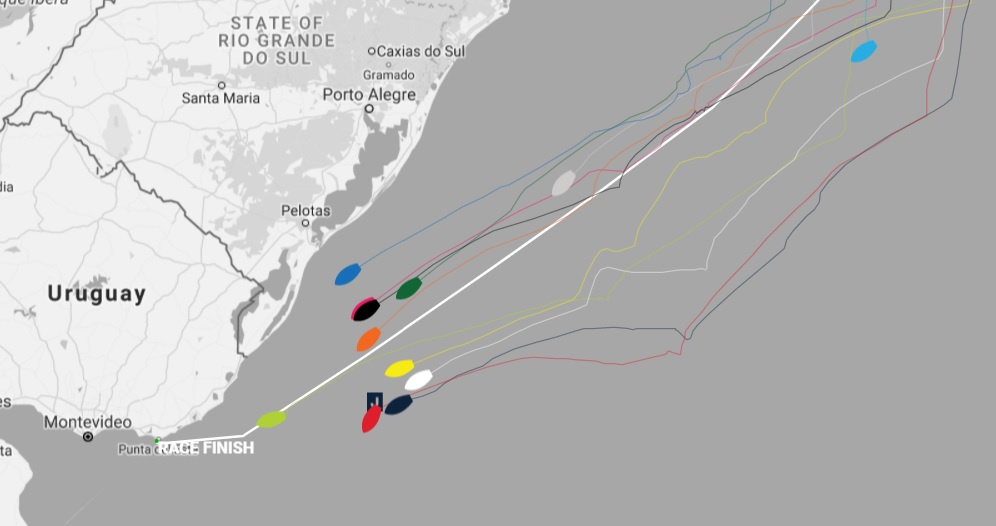 HotelPlanner.com is nipping at the heels of GREAT Britain and is currently in fourth place, closely followed by Qingdao (fifth), Garmin (sixth) and Liverpool 2018, who has re-emerged in seventh place after being in Stealth Mode. After throwing off the invisibility cloak, Lance Shepherd, Skipper of Liverpool 2018, said: “The plan paid off and we managed to skim past the northern wind hole to catch Garmin and HotelPlanner.com whilst the other guys heading south east were caught in their own much larger hole.”

Dare To Lead has dropped position to eighth place, but is still hunting the boats in front. Skipper, Dale Smyth, reports: “Entering our last 24 hours at sea hopefully and it is absolutely incredible how tight it is between all of us dashing towards the finish line. It’s been a fast 24 hours of sailing and the wind clocked forward enough last night to force us back under white sails which actually didn't slow us at all.”

Unicef, meanwhile, isnot far behind in ninth place, while Visit Seattle is in tenth. Visit Seattle Skipper Nikki Henderson remains philosophical about her team’s slide down the leader board, explaining: “We will arrive a humble crew - fully aware that you can be in first place for a week, and in the flip of a hat right down to tenth. At the same time, this has provided a slight release from the pressure of racing, to take the time to take stock on where we are and how far we have come.” 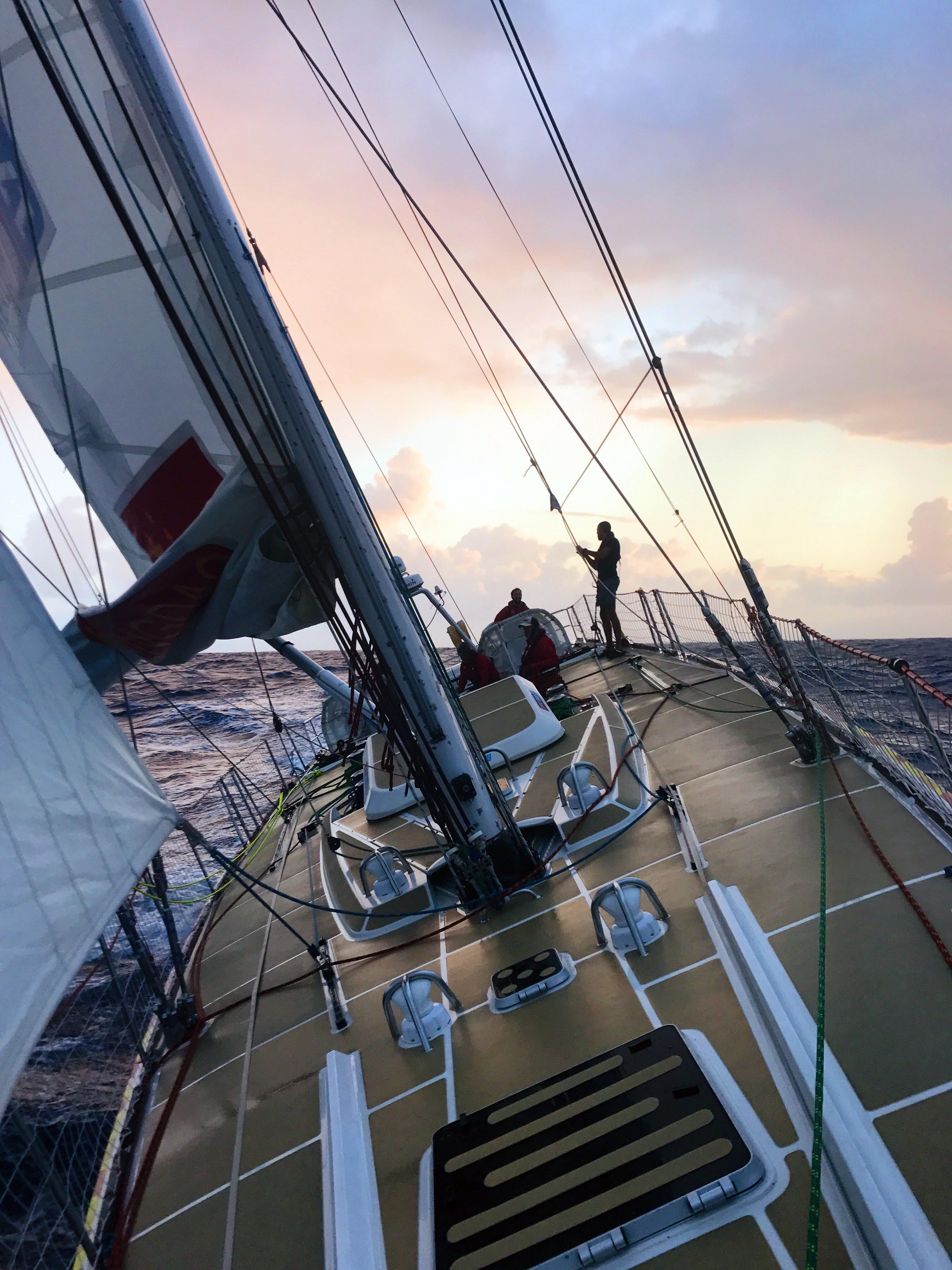 IMAGE: View from the bow of Qingdao, at dusk.

Greenings and Nasdaq, in eleventh and twelfth place respectively, have faced some difficult sailing conditions with the teams needing to concentrate in a deteriorating sea state. Greenings Relief Skipper, Dan Smith, says: “The sea state deteriorated and we made the call to wake the standby watch and drop the sail. As they got kitted up we were hit by a huge gust, the boat broached and leaned on her side. This one was unrecoverable so a quick spinnaker drop and maximum effort from the deck team got the sail below.” Although Greenings will miss out on a placing in terms of line honours, the team is still well in the race for the overall Atlantic Trade Winds Leg 1 win, due to the redress awarded by the Race Committee for its forced diversion to Porto for a replacement Skipper.

Clipper Race Meteorologist, Simon Rowell has informed the teams that a front is moving up the coast slowly and also stretching out into the South Atlantic. He adds: “As it does so that interior low will catch on to it and move out to sea, with the next high-pressure cell popping off the mainland behind it.” The fleet will need to remain vigilant as the race reaches its final stages.

After a frustrating 24 hours languishing in a wind hole off the southern coast of Brazil, most of the Clipper Race fleet is on the move again.Sanya Serenity Coast remains in first place and whilst Skipper, Wendy Tuck, is relieved the wind has returned, she…