The Clipper Race fleet has spent much of the twelfth day of Race 10: The Garmin American Challenge either desperately holding onto leaderboard positions or making gains on race leaders as the giant wind hole slows progress, compressing the fleet once more at this halfway stage.

24 hours ago, the top nine teams were separated by 200 nautical miles (nm) but with the full effects of the wind hole now setting in, today the top ten teams are just 80nm apart.

For race leaders Qingdao, Dare To Lead and Visit Seattle , the light wind lottery threatens to undo their hard earned gains. Qingdao Skipper Chris Kobusch comments: “It is slightly frustrating, especially with the rest of the fleet slowly catching up with us. But not much we can do about it right now. Just sit and wait for the wind to fill in again.”

However, for GREAT Britain, which has made some 80nm on ninth placed Nasdaq over the last 24 hours, conditions couldn’t have been more different to those served up to the main pack and the team is taking full advantage. Skipper Dave Hartshorn explains: “Last night we had a bit of a sporty gybe in an unexpected patch of confused sea and equally unexpected wind speed of 25kts.Then, once on the starboard tack, we were away, long low swell, allowing us to surf, achieving prolonged boat speeds of between 16-20kts. Thundering into the black starlit abyss, night sailing at is exhilarating best.”

For Liverpool 2018, which remains around 180nm behind GREAT Britain after suffering setbacks during the opening days of Race 10, there is little to lose and the team has decided to take advantage of the final Scoring Gate point before deploying some bold tactics that could make for fascinating viewing over the coming days.

Skipper Lance Shepherd explains: “We decided to take in the Scoring Gate on our way south in a hope that our calculations are right and a point was left on the table by the rest of the fleet. We then plan to continue south and east as the wind allows, sailing around the wind hole on the western side in a hope to pick up a more consistent breeze.

“The thing is, when you’re this distance behind you have only a few choices; follow the fleet in a hope they hit light airs and you can catch up or do something a little different and try for a better line/ more wind. When you’ve nothing to lose its worth a gamble... I hope! I will let you know how it maps out tomorrow.” 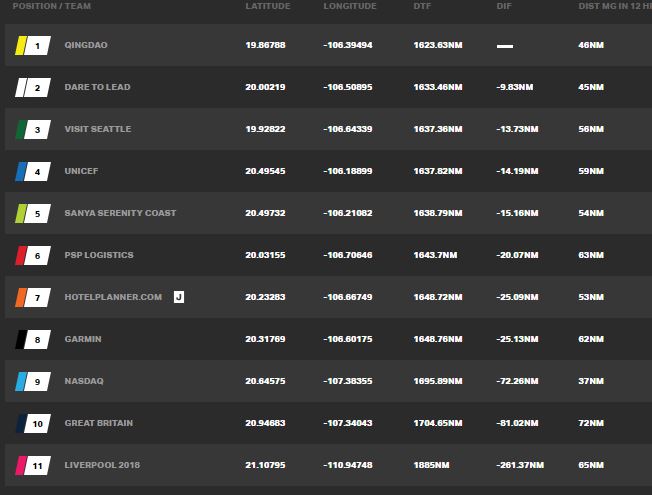 Even for teams just a few miles apart, localised breeze is making all the difference as Garmin Skipper, Gaëtan Thomas, explains: “Since I started writing, the wind has almost completely gone but just six miles south HotelPlanner.com and PSP Logistics are still moving!”

Whilst only time will be able to tell which teams triumph, across the fleet one thing remains consistent; temperatures are beginning to soar. Skipper of HotelPlanner.com, Conall Morrison, reported temperatures of 37 degrees Celsius on deck and although the heat can take its toll, there is no complaints from Sanya Serenity Coast Skipper Wendy Tuck who said: “The normal mantra on these boats is eat, sleep, sail, repeat. A new one is thrown in there now is try to sleep whilst sweltering away down below.

“Don’t get me wrong, I love the heat and would much rather have trouble sleeping during the day in the heat then having to put layer upon layer of clothing on. It is beautiful out here now.”

With breeze due to start setting in from tomorrow, Sunday 13 May, keep an eye on the Clipper Race Viewer to watch how the light wind lottery plays out. You can also read the daily Skipper Blogs in full on the Team Pages, as well as keep up with the latest on board in the Crew Diaries.

Light wind tactics remain the central theme on the tenth day of Race 10: The Garmin American Challenge as teams seek to maintain the best possible course ahead of an upcoming wind hole off the coast of Mexico. At what could prove…

With light and variable winds set to afflict the Clipper Race fleet for the next few days of the race from Seattle to Panama, teams are busy talking tactics, with all keen to avoid the giant wind hole forming off the southwest coast of…