The looming wind hole off the coast of Mexico has so far been relatively kind to the Clipper Race fleet during Day 11 of Race 10: The Garmin American Challenge from Seattle to Panama, with teams opting for the inshore route two days ago starting to feel the benefits.

For the first time in almost a week, there has been change at the top of the leaderboard, with Dare To Lead taking second place from Visit Seattle, which now sits in third. Dare To Lead moved up in the standings after using a stream of current to aid its 20 nautical mile (nm) advantage. However, the team is not getting too comfortable, as Skipper Dale Smyth explains: “Lying in second, the big risk is the fleet compressing up from behind as we will generally arrive in the wind holes first.

“This is now becoming the part of this leg where you need to do everything you can to keep the boat moving as every mile counts.” 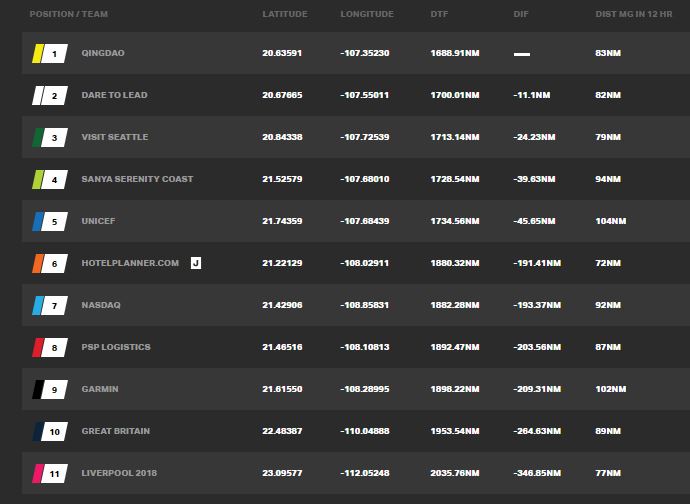 And with the top nine teams just 200nm apart, he adds: “We are all still relatively close as a fleet and once you start to get into the minefield of fickle wind holes there are no guarantees as to the outcome. That is ocean racing and it can make your day or break your heart.”

The mid-fleet teams, especially for those that took the inshore route, have made gains on the leading pack and the wind hole, which is due to set in fully today, could offer some new tactical opportunities. Skipper of seventh placed Nasdaq, Rob Graham, comments: “Our weather forecast has been saying for a week now that the wind is going to die off soon, but so far, we've managed to keep moving reasonably well.

“The spinnaker is still flying, we've just been picking our gybing angles according to wind shifts and watching the fleet on our extended AIS range for clues as to what's going on elsewhere.”

Feeling the pressure, Skipper of fourth placed HotelPlanner.com Conall Morrison reports: “The wind was forecast to die right away to nothing, fortunately we still have some breeze and are tenuously holding on to our fourth position as boats further north have taken an inshore route and made some gains.”

According to Clipper Race Meteorologist Simon Rowell, the remaining breeze is forecasted to fade over the coming 24 hours, and whilst it should start to pick up again from Sunday, the coming days will prove challenging for the teams.

Garmin Skipper Gaetan Thomas says: “The breeze is slowly getting very light, it looks quite tricky in the forecast ahead with wind holes, The Garmin American Challenge is just about to start I think!”

For Liverpool 2018, which has been trying to gain miles on the fleet since the beginning of the race, this could prove to be a valuable opportunity. Skipper Lance Shepherd reports: “By not flying our spinnaker on the first night of the race, we dropped behind a little and consequently had different winds to the rest of the fleet and so we are struggling to catch up.

“It is frustrating to say the least but my decision as skipper to preserve the sails and not over stretch the new joiners by having to helm with kites for the first time in the dark is something I just need to suck up, so broad shoulders time for me and I do think I made the correct choice at the time.”

Looking ahead, it will be interesting to see how the next 24 hours plays out with wind hole tactics likely to affect leaderboard positions. To follow the fleet’s progress, keep an eye on the Clipper Race Viewer. You can also read the daily Skipper Blogs in full on the Team Pages, as well as keep up with the latest on board in the Crew Diaries.

NAME Dmitry PapulinAGE: 31NATIONALITY: RussianLEGS: Full circumnavigationTEAM: Sanya Serenity Coast31-year-old Dmitry Papulin, the only Russian to be circumnavigating during the Clipper 2017-18 Race, is having the time of his life after spending the last seven years dreaming about his adventure. He explains: “It…

The sixth day of Race 10: The Garmin American Challenge has featured champagne sailing conditions, as the fleet marks…