After one full week of racing in the Garmin American Challenge, nine of the eleven Clipper Race teams have now embarked on the first bonus point scoring opportunity of Race 10, the Elliot Brown Ocean Sprint.

With steady weather conditions across the fleet there has been no change on the leaderboard and with just 60 nautical miles (nm) separating the sprinting teams, the Elliot Brown Ocean Sprint looks to be a pivotal tactical moment. Qingdao Skipper Chris Kobusch explains: “The big question is: do we stay on a southerly course to minimise the time in the ocean sprint and potentially score some points, or do we gybe and defend our pole position and aim for the Scoring Gate?” 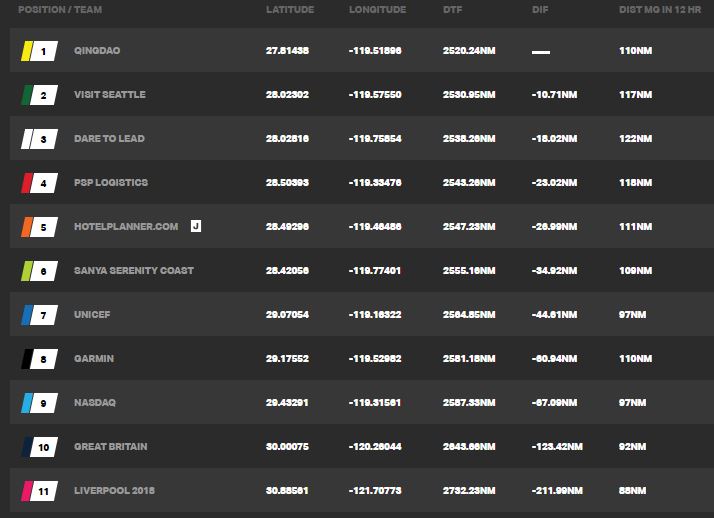 Standings: Correct at time of publishing

It will be a big decision for the team, which has only missed out on Scoring Gate points once since the Clipper 2017-18 Race began in Liverpool, UK, last August.

Echoing Chris’ thoughts, Sanya Serenity Coast Skipper Wendy Tuck commented: “I think it’s going to be a long-distance sprint, we are unable to sail in a straight line so there will be some gybing and some lighter breeze to contend with.”

Visit Seattle Skipper Nikki Henderson added: “We are just deciding now whether to keep going on this tack and push for a good time in this, or gybe and head south east in more of the right direction. Racing is about compromise ... just hoping we strike the right balance.”

Elsewhere in the fleet the decision may come a little easier after continued ‘kitemares’ on board HotelPlanner.com, PSP Logistics and Garmin have slowed progress during the ocean sprint. PSP Logistics Skipper Matt Mitchell explains: “It's been another 24 hours full of spinnaker issues. We've had more on this leg so far than the whole of the rest of the race combined!

“The guys have been doing a great job though and repairs to the Code 1 (lightweight spinnaker) are well underway but it has meant that we have lost significant ground which is irritating.”

For the teams that opt for sticking with the Elliot Brown Ocean Sprint, there will be no let up with Unicef Skipper Bob Beggs reporting that weather conditions are making it a closely fought battle: “We are galloping along in company with most of the fleet as, thus far, no yacht has managed an escape.”

Looking ahead, Clipper Race Meteorologist Simon Rowell explains why racing is set to remain close and tactical for the coming days: “The high pressure is continuing to drive a decent breeze down the coast, and a big low-pressure system, which is making landfall north of that tomorrow, will help maintain a steady breeze for the next two to three days.”

To watch how the Race 10 Elliot Brown Ocean Sprint unfolds, keep an eye on the Clipper Race Viewer. You can also read the daily Skipper Blogs in full on the Team Pages, as well as keep up with the latest on board in the Crew Diaries.

The sixth day of Race 10: The Garmin American Challenge has featured champagne sailing conditions, as the fleet marks…

The wind has returned on Day 5 of Race 10: The Garmin American Challenge from Seattle to Panama, but yesterday’s wind hole off the Californian coast has had a big impact, with the Clipper Race fleet more compressed than ever.For the first time since the…

It’s been a day of learning for the Clipper Race crews, with the majority of teams dealing with a series of ‘kitemares’ as the fleet entered the waters off California on day three of Race 10: The Garmin American Challenge from Seattle to Panama.…