The final race of the Clipper 2017-18 Round the World Yacht Race got underway yesterday following a spectacular stopover and send off from Derry-Londonderry.

The start line, positioned between Greencastle and Magilligan Point was tightly contested. First to cross was Dare To Lead, shortly followed by Unicef and the two teams battling it out for the overall title, Sanya Serenity Coast and Visit Seattle.

Tricky conditions in the initial stages of Race 13 has seen the leaderboard changing frequently over the first 15 hours of racing but as the fleet begins to pass Tory Island, it is Qingdao which currently leads the fleet. 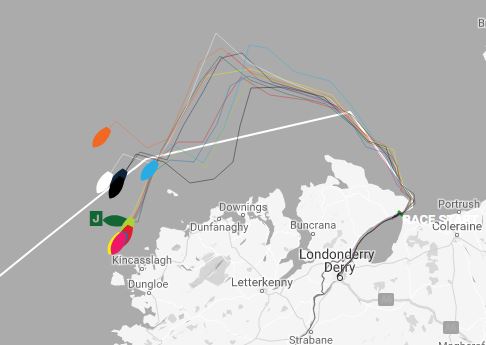 Reporting this morning, Visit Seattle Skipper Nikki Henderson, said: “It was an intense start to a race. We were on the line bang on time - not the windward boat but in clear air. Made it to the first mark in fourth.

“Then for the next four hours we flew Code 1 (lightweight spinnaker), yankee, windseeker, Code 1, windseeker, yankee - and we are back on track in the forecast west south westerly beating to windward in moderate breeze.”

After opting to play the Joker Card in the final race the pressure is on for the final podium positions, as Visit Seattle will double its race points in this final race. Despite this she adds: “Who knows how the next five days will pan out. All we can do is our best and enjoy these last moments at sea.”

For Sanya Serenity Coast, currently sixth in Race 13, the light winds during the first few hours dented its strong start. Skipper Wendy Tuck, racing to hold onto the team’s overall lead in this final stage, said: “We started off with a great start and ended up being second out of the very picturesque River Foyle. Then ohh no, another light wind patch, so the fleet compressed again, it was a game of snakes and ladders, then in the end we ended up on a snake.

“So now we are playing a bit of catch up, and the trouble is now, all we wanted to do was cover Visit Seattle. We were doing a good job of it, then when dark came we lost them.”

Already we can see a split in tactics as half the fleet head in shore led by Qingdao, Liverpool 2018 and Unicef, first, second and third respectively. The other half, sitting in the bottom half of the fleet, look to have opted for a more offshore route. As throughout this entire edition however, racing remains extremely tight with less than 20 nautical miles separating the whole fleet and 5nm is all that stands between the top six. 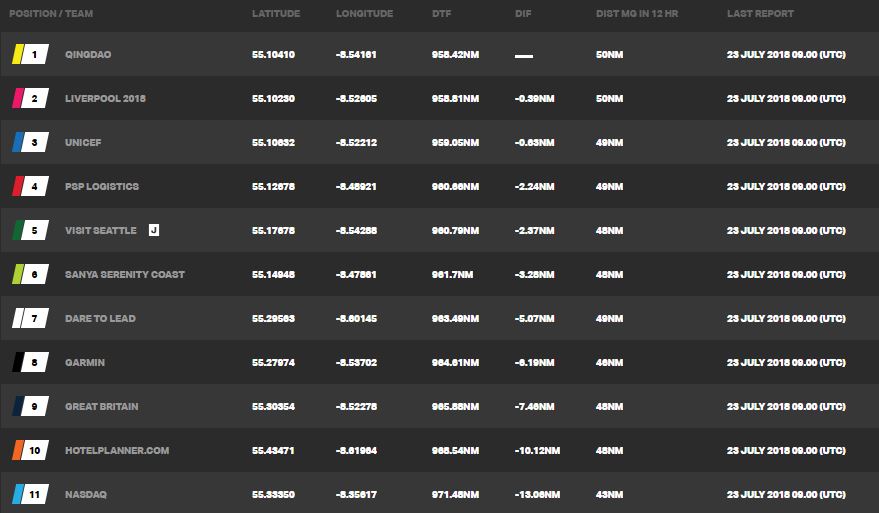 Decisions on how to navigate the west coast of Ireland will be influential as Simon Rowell, Clipper Race Meterologist, reports that the west south westerly wind that the fleet is experiencing is going to continue to be the theme until the fleet reach Mark Fastnet meaning the fleet will continue the tough beat upwind.

Whilst racing and the finish into Liverpool is it at the forefront of all the skipper’s minds, each of them could not speak more highly of Derry-Londonderry and the support they received during the final stopover. All of the Clipper Race teams extended their thanks for the warm welcome and hospitality shown to them. Skipper of Unicef, Bob Beggs, said: “My second Clipper Race visit to Derry-Londonderry, two years ago we had a great time and this year it was even bigger and better.

“The hospitality and welcome was in line with its LegenDerry reputation. I would like to thank the Mayor, the councillors and all the invisible dedicated people who organised our short stay.”

To follow the progress of the Clipper Race teams, as they approach Race Finish in Liverpool, keep an eye on the Race Viewer. You can also find out more about life on board by reading the Skipper Blogs in full on the Team Pages and the latest Crew Diaries.