Day 12 of Race 2: The Commodore’s Cup has turned out to be a humid, rainy one for the Clipper Race fleet, with all yachts now deep into the Doldrums Corridor. And whilst the conditions of the Doldrums Corridor normally paints a picture of calm seas and sun, the Intertropical Convergence Zone (ITCZ) has thrown up some surprises for the crew.

Seattle is the only team not to have taken advantage of the Doldrums Corridor rule, while allows the engine to be used for a maximum of six degrees of latitude during a 60 hour period. Seattle Skipper Ben Keitch reports: “We've had a bit of everything since yesterday. Swirly squalls that send our Windex spinning 360 degrees. No wind. Then wind from every quarter. First nothing, then 6 knots, then 16, then 22 knots! Then rain, reducing our world to nothing more than a white mass of sea just visible at the end of the bow, and driving icy particles in our faces.”

It was a similar story on WTC Logistics, with Skipper Mark Burkes sharing: “We had our first BIG rain squall yesterday afternoon with a sustained 25 - 30 knots and torrential rain for about 90 minutes, which drove us west at 9 knots before we could tack. Ana Quintas, drenched through in shorts and t-shirt, turned to me halfway through our reef and shouted back to me, "so THIS is a squall?!". I had been warning of them for so long I think it was a relief for them to finally get one!”

There has been a silver lining to the squalls, as Punta del Este Skipper Jeronimo Santos Gonzalez explains: “The warm rain came in and we all showered on deck singing and dancing. Having our first shower for the last two weeks, we gave it our all; shampoos, shower gels and even conditioners. We felt like a million dollars!” 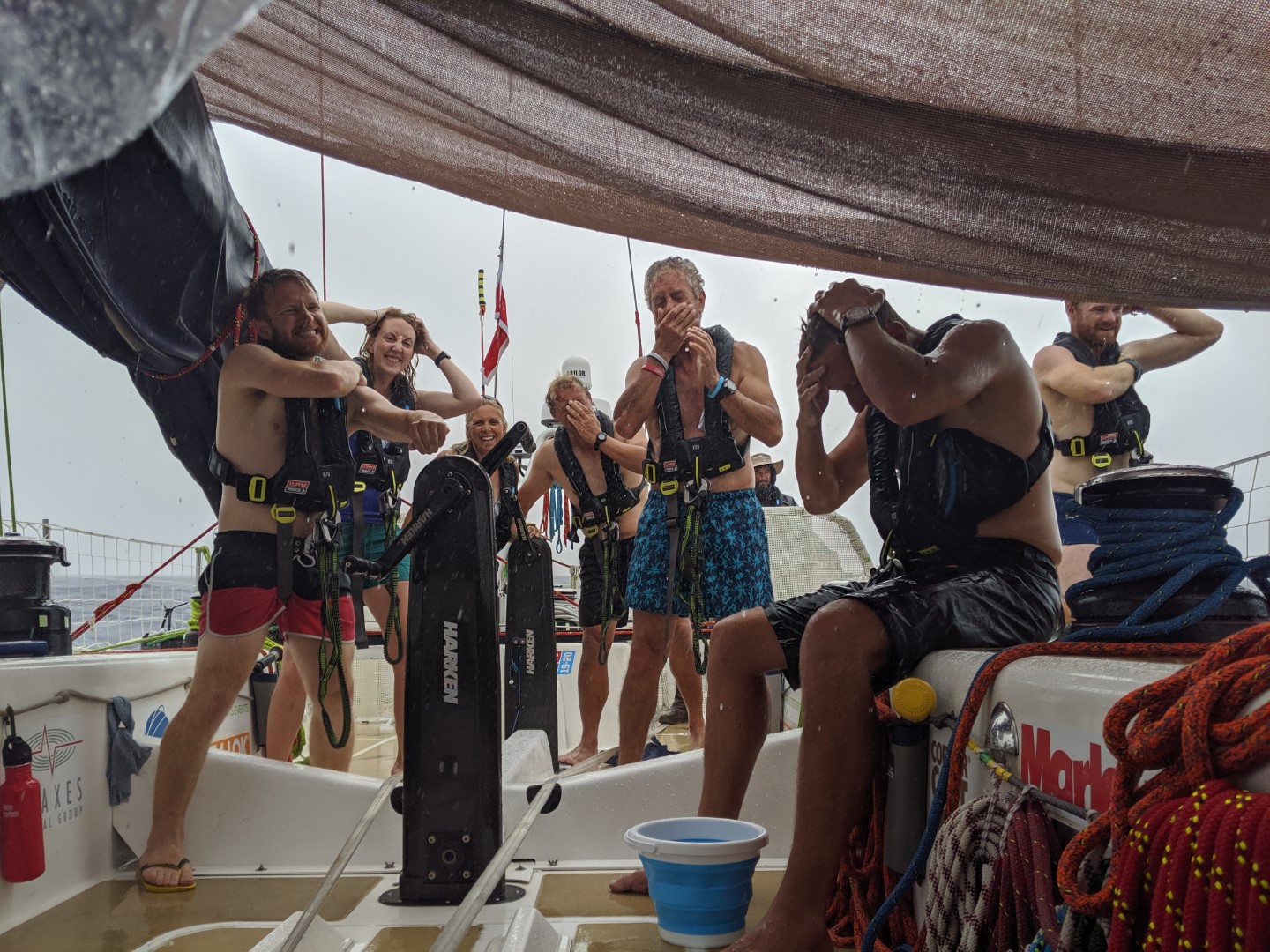 Image: the teams enjoy a refreshing shower on board

A tight race continues at the front of the pack. Visit Sanya, China has stretched its lead to around 50nm, but there is nothing in it between Ha Long Bay, Viet Nam and Qingdao, in second and third respectively. With the end of the Doldrums Corridor looming, those in the top half of the leaderboard are keeping a watchful eye on the paths chosen by the chasing yachts. Unicef Skipper Ian Wiggin says: “The boats that started motoring behind us will be charging up at 6 knots and we will have to fight really hard, in what look like light and fickle winds, to stay ahead.

“There looks like there should be enough breeze to keep us interested and make progress down to the bottom of the corridor, where the proper Trade Winds should kick in and drive us southwards, so fingers crossed.” 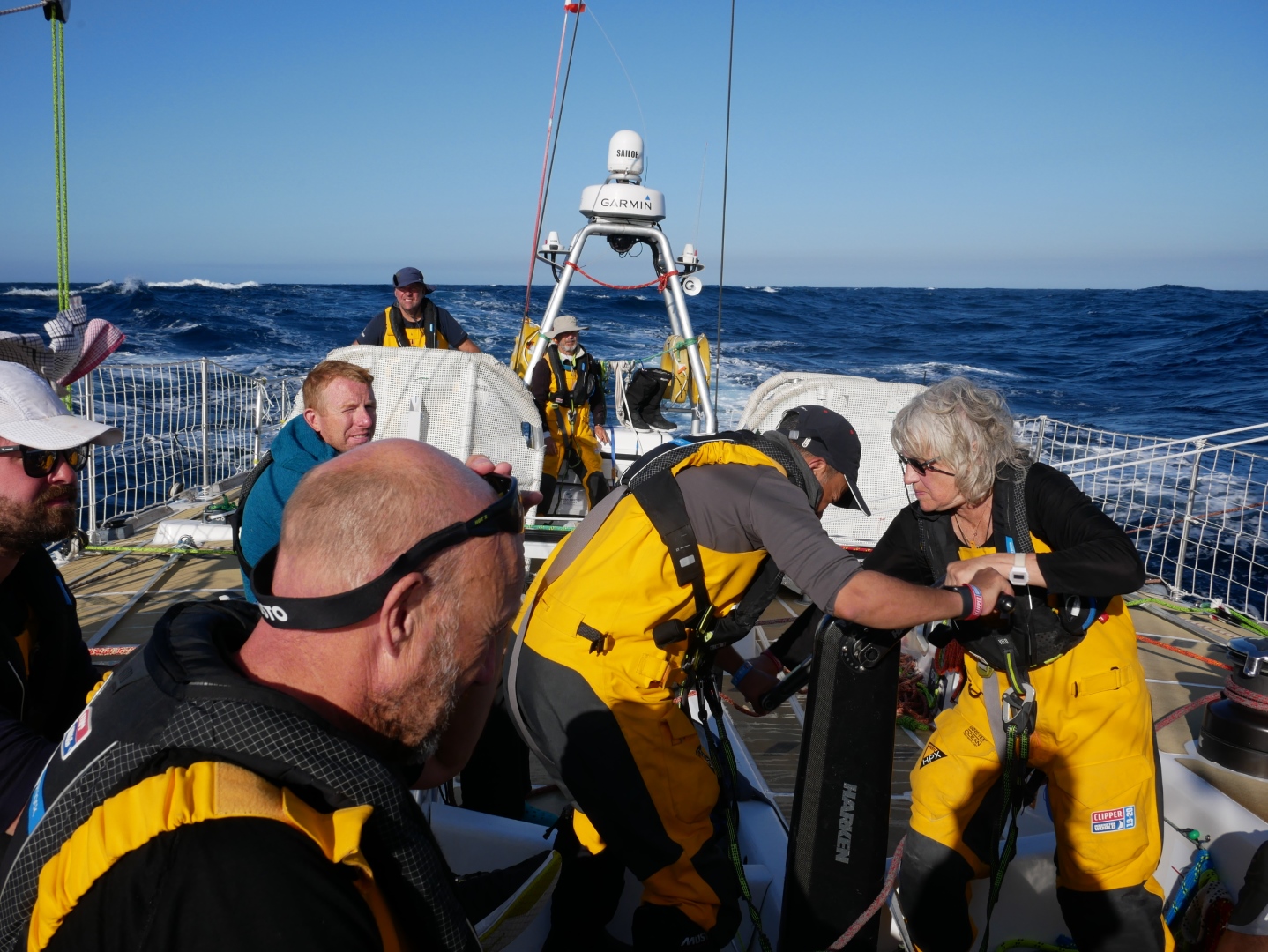 The Trade Winds should arrive right on schedule according to Clipper Race Meteorologist Simon Rowell, who reports that the South East Trade Winds are due to make it up to 08N over the next 48 hours, meaning the teams should have no problems exiting the Doldrums when it is time to switch the engines off.

Keep your eyes on the Race Viewer as the fleet draw closer to exiting the motoring zone and start racing again southwards, towards the longed-for port of Punta del Este.

As Punta del Este Skipper Jeronimo Santos Gonzalez sums up the next section of the race: “The race takes a new turn from the Doldrums to Punta del Este, where conditions are more variable and unpredictable and every boat from the front or back of the fleet will have an opportunity to do well.”