For most of the Clipper Race fleet, Day 10 of Race 2: The Commodore’s Cup to Punta del Este, Uruguay, has been hot, sticky and windless. This can only mean one thing: the Doldrums have officially arrived.

Qingdao and Unicef, which are currently in third and fifth place respectively, are the first to take advantage of the Doldrums Corridor and switch their engines on. The Doldrums Corridor mechanism allows teams to elect to motor-sail for exactly 6 degrees of latitude and for a maximum of 60 hours in order to prevent the fleet becoming becalmed in the area of fickle wind just north of the equator. The decision on when to turn the engine on adds a fascinating tactical element to this section of the race. Deputy Race Director Dale Smyth comments: “There are always a lot of decisions to make and factors to consider when ocean racing, the Doldrums Corridor just adds further questions for the teams to consider. Do we need to use our engine? And if so, when and where do we want to enter and exit the corridor? 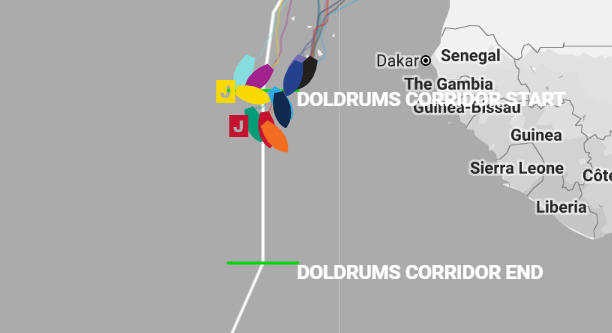 “I know that once the fleet has experienced the incredible humidity, heat and frustrations of no wind, they will agree that it is a huge bonus to have the opportunity to tactically get out of that area and carry on racing.”

The Doldrums Corridor motor-sail will be a welcome change for the leading boats after they bore the brunt of Tropical Storm Lorenzo overnight. Seumas Kellock, the Skipper of the leading Visit Sanya, China, explains: “Well, what a roller coaster 24 hours that has been. Sure enough, the green monster came back with a vengeance, wiping out a couple more of the crew and some unexpected sufferers. All I can say is that they should be glad that the wind wasn’t as strong as forecast. We were expecting up to 35-40 knots but only ever saw a couple of 30’s. So although I’m sure they don’t feel like it, the crew got away lucky really and now they can say they’ve sailed through a named storm. Even better than that, made some gains on their competitors while they were at it.

“The first squall we’ve hit as a team was an absolute cracker as well. The wind was a steady 20 knots and, as we were preparing to put a reef in, boom, 38 knots over the deck, lashing rain and as Afshin put it, the sea looks like some CGI animation with the rain dancing over wind capped waves. Then, as quickly as it had come, 8 minutes later, it was gone.”

IMAGE: The final sight of land for WTC Logistics.

The top three - Visit Sanya, Qingdao, and Ha Long Bay, Viet Nam, remains unchanged for a fifth straight day. Meanwhile, the rest of the fleet is now all clear of the Cape Verde Islands, meaning the next land the teams will see will be on the other side of the Atlantic. But with the chasing pack yet to reach the start gate of the Doldrums Corridor, the light conditions are tough going. Zhuhai Skipper Nick Leggat reports: “During the day we made several sail changes as heavy rain squalls associated with Tropical Storm Lorenzo bore down on us. Reefed main. Shook out reef. Dropped Yankee 3. Hoisted Yankee 2.

“And then around sunset, the plan fell apart as the wind shut down completely, several hours earlier than expected. We have spent the night drifting with flapping sails, trying everything we can to creep forward but it is painfully slow progress!”

With the weather forecast from Clipper Race Meteorologist Simon Rowell bringing no relief to the current conditions, the only option for the chasing pack is to keep inching towards the start of the Doldrums Corridor. For those up front, it will be a matter of when to start their engines. To follow the fleets’ progress, keep an eye on the Clipper Race Viewer.