Unicef is aiming to make today its final at sea of the Stormhoek Race to the Cape of Storms.

Reporting earlier this morning, Skipper Bob Beggs, whose team will finish in eleventh place, says: “The AIS has spotted the first ship for over two weeks, a sure sign that we are approaching landfall. So far the wind is holding up and we will start preparations for arrival later today.

“We will be bidding farewell to the Atlantic for eight months until we reappear from the Caribbean Sea on-route to New York next year.” Signing off his blog, he adds: “South Africa here we come.”

At its current speed, Unicef is expected to cross the Race 2 finish line between 2200 and 0000 local South African time this evening. 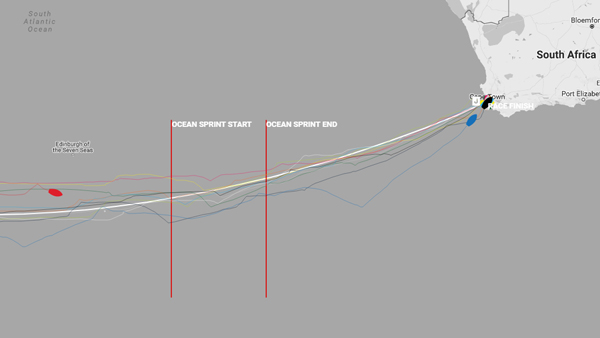 Just under 1500nm behind, Skipper Roy Taylor’s PSP Logistics has been flying along as the team experienced a strong frontal system.

In part of his blog which was written last night, Roy said: “Wooooh, flying along in some rather fruity conditions, three reefs and Yankee 3 flying. Gusting 50 knots at times and our Clipper Race Meteorologist Simon Rowell tells us to expect the gusts to peak at 70 knots. (You don't always have to be so honest Simon!!)

“….as we charge towards the Elliot Brown Ocean Sprint, why oh, why could we not have had this little breeze for that???”

Picking back up with today’s action, Roy says: “Today we are being tracked by an Orca Whale who was swimming in our wake for quite some time, what a magnificent sight in an otherwise dull, grey, desolate ocean.

“The front went through a little quicker and was all done and dusted by 1930 UTC, the first watch being treated to a clearing sky, an easing wind (but an old sea) and then a blanket of stars to steer by.”

Despite re-starting the Stormhoek Race to the Cape of Storms a week behind the rest of the fleet, PSP Logistics is still very much in contention for the Elliot Brown Ocean Sprint points.

Another front is predicted to pass over the team in about 24 hours’ time, which will again reach gusts of around 50 knots. Skipper Roy will be hoping it comes in just the right direction to accelerate them through the Ocean Sprint and further towards land.