Following another successful day under spinnakers, the Clipper Race fleet continues to eat away at the miles and make good progress towards Sanya.

Thanks to the stable north easterly wind, the fleet has sustained consistently high boat speeds and competition on the leaderboard remained tight during Day 14 of Race 7: The Forever Tropical Paradise Race.

With less than 75 nautical miles (nm) separating the top six teams, which also form the leading pack, any loss in boat speed can make significant changes to positions. At the top of the leaderboard, Qingdao claimed back the lead from PSP Logistics which sits in third place today. Qingdao Skipper Chris Kobusch reports: “We are still flying along under spinnaker and are getting closer to the start of the Elliot Brown Ocean Sprint. Just over two days before we start sprinting again. Fingers crossed for some decent winds then!”

It has been a good day for second placed Sanya Serenity Coast which has managed to maintain both its boat speed and position. Skipper Wendy Tuck said: “We are now counting down the miles to the top of the Philippines, which is where our next waypoint is, and I imagine we will be converging with a fair amount of the fleet for the Elliot Brown Ocean Sprint.”

For Matt Mitchell Skipper of PSP Logistics, currently in third place, it has been frustrating however, as he explains: “We got caught by a few squalls last night that seemed to suck the wind out of the whole area making us a bit slower than our nearest competitors. Beyond annoying as this is now nothing but a drag race at least until the top of the Philippines.” 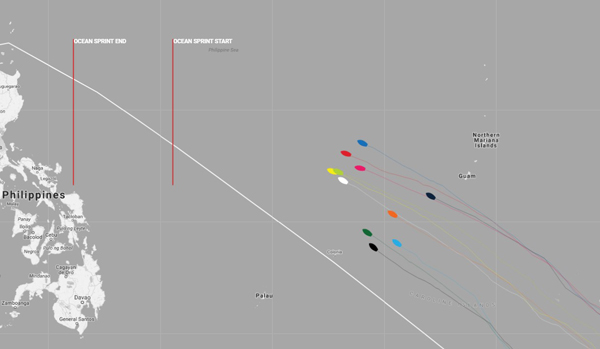 The next obstacle for the fleet to focus on is the upcoming Elliot Brown Ocean Sprint. On board fourth placed Dare To Lead, preparations have already begun and Skipper Dale Smyth explains: “We are currently running competitions between watches for distance records in training for our Ocean sprint. We are hoping that the wind holds for us is over Luzon and down towards China.”

The fear of another wind hole is also on the mind of Liverpool 2018. Skipper Lance Shepherd says: “We are bobbing along at eleven knots heading towards China, the crew are all helming well and the rotations are working well.

“However, it’s not going to be that easy for long, as always there is a nice wind hole forming. What tactics will people go for? Higher, lower, will we all park up and the boats behind skirt round us? Will it dissipate before we get there?”

Despite matching the distance covered in twelve hours to those of the frontrunners, Unicef has slipped to sixth place on the leaderboard but remains in the leading pack.

Heading up the chasing pack, Visit Seattle has moved into seventh place. Skipper Nikki Henderson says: “We are still chugging along nicely in the right direction. We picked up some current this morning so speed has increased to match the guys up north now, who are well into the North Equatorial Current.

“Unfortunately, with the leaders 160nm away, catching them feels like an ambition to far right now. I guess that's the price we paid by going to the Scoring Gate.”

For Garmin, which also made the decision to go for the bonus points that the Scoring Gate had on offer, and sacrificing its position on the leaderboard with a southerly routing, the fight for positions still remains in full swing. With further points on offer during the upcoming Elliot Brown Ocean Sprint, thoughts have turned to maximising its decision. Skipper Gaetan Thomas reports: “The heat and humidity still challenging, but we are still fighting to get some positions back and with a bit of fortune making some points in the Elliot Brown Ocean Sprint. This time hopefully will be a sprint and not a slow down as the last few… less than 800nm to it!”

For HotelPlanner.com, in ninth place, GREAT Britain, in tenth, and Nasdaq, in eleventh, progress continues at a steady rate. With both HotelPlanner.com and GREAT Britain skippers, Conall Morrison and David Hartshorn, are waiting on a change in the apparent wind angle to switch up to a bigger spinnaker and gain a valuable extra knot of boat speed. Nasdaq Skipper Rob Graham reports: “Nasdaq has been happily trucking along under spinnaker and recording double-digit hourly runs through settled trade wind conditions.”

Clipper Race weather guru Simon Rowell reports that the stable, fast conditions are set to remain the same for the fleet and satellite images show that there’s still a fair amount of upward motion around, meaning the fleet should keep expecting squalls. He also forecasts that the breeze should gradually veer over the next day or so as the high moves east, and there will be a period of lighter and more variable winds before the next batch of the north easterlies arrive.

What will this mean for the upcoming Elliot Brown Ocean Sprint? Will it be a sprint or another marathon? Keep track via the Clipper Race Viewer and hear more from the Skippers and crew on the Team Pages.

Race 7: The Forever Tropical Paradise Race will finish in Sanya Serenity Marina in Sanya, and the fleet is expected to arrive between 21 – 25 February after roughly 23-27 days at sea. Although the finish line is over 2,000 nautical miles away, crews are excited to explore Sanya and all it has to offer during the stopover, and you can find out more here.

Relief is the overriding emotion amongst the Clipper Race fleet on Day 12 of Race 7: The Forever Tropical Paradise Race as the Trade Winds which continue to boost progress at the front have now also kicked in for the western positioned teams, bringing a…