The third day of Race 7: The Forever Tropical Paradise Race to Sanya was meant to bring high winds from a low-pressure system but instead, the Clipper Race fleet has seen the return of the dreaded Pre-Doldrums, Doldrums.

This is not the first time the teams have been caught out in a windless zone on the approach to the Doldrums Corridor, which was put in place to avoid days of becalming in the broad belt of shallow pressure where the trade wind air streams of the Northern and Southern hemispheres flow. The last time the fleet neared the equator, and experienced a similar frustration, was during Race 1 from Liverpool, UK to Punta del Este, Uruguay.

Clipper Race Meteorologist Simon Rowell explains: “The forecast low did speed up, but it also dissipated quite quickly. it’s now off East and the Clipper Race fleet is now in a trough between the last low and the next one coming in.”

Despite the wind hole hindering the Clipper Race fleet’s progress and compacting the fleet, Sanya Serenity Coast maintains its small advantage on the rest of the fleet and leads for the third consecutive day. Skipper Wendy Tuck commented: “Things are looking up right at the moment, fingers crossed it lasts, who knows though as the forecast for today has been completely incorrect.”

With Qingdao taking second place, the Chinese teams take the top spots and lead the way to their home country but Dare To Lead, which was in second place yesterday, is keeping the pressure on in third place. Speaking from on board today, Dare To Lead Skipper Dale Smyth and his team have been feeling the strain of the light wind conditions. He says: “What a painful day of drifting with very little wind in the scorching heat and a lumpy swell. We were supposed to be getting into a tropical storm with 30-40 knots… I know which I prefer.”

With much of the fleet now re-grouped, the leaderboard is likely to change frequently over the coming hours but at time of writing, Unicef is just shy of the podium positions in fourth, but Garmin, which was in eighth place yesterday, now sits in fifth.

Pleased with progress, Garmin Skipper Gaetan Thomas explains: “Well, we had a good run last night and this morning, working hard on trim we have gained quite a lot of distance on the fleet. Now we are stuck in a wind hole and all of the fleet is nearly back together again!” 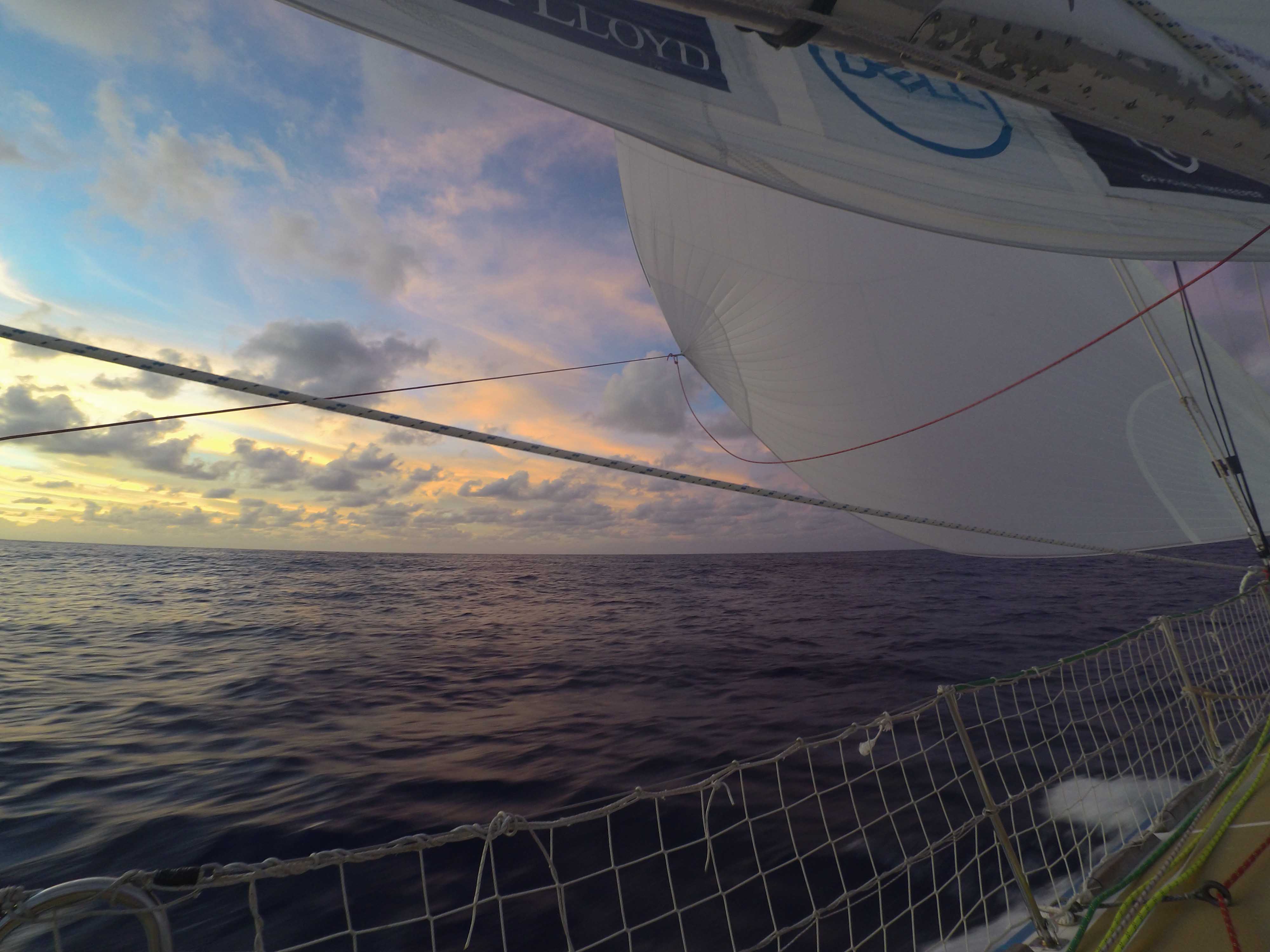 Photo: Sunset taken from on board Nasdaq today

Sixth placed Visit Seattle and seventh placed PSP Logistics sit at the most westerly end of the main pack and both teams are hoping that their position will pay off when the next low pressure system comes though. Staying optimistic, PSP Logistics Skipper Matt Mitchell reflects on the last 24 hours: “On the bright side it has been marginally cooler today with top nav station temperature of 36 degrees. There are a few squalls around which look like they have not much wind, but lots of rain which will be a welcome refreshment on deck.”

Nasdaq, in eighth, and Liverpool 2018, in ninth, may sit further down the leaderboard today but also form part of the tightly-bunched pack and both teams are sitting only 20 nautical miles behind the frontrunner.

At the back of the fleet, HotelPlanner.com takes tenth place and GREAT Britain takes eleventh. Despite its position on the leaderboard, GREAT Britain Skipper David Hartshorn is ensuring that team morale remains high on board. He says: “We are moving into “Figure it go Friday”, trying work out why, consistently, the rest of the fleet are making 1.5kts better speed than us.”

Looking ahead, teams are expected to get some of the highly-anticipated stronger breezes when the next low-pressure system comes though. As the fleet creeps north, it should encounter steadier west/south west winds in which it will be looking to take advantage of in order to accelerate away through the upcoming Doldrums Corridor.

Race 7: The Forever Tropical Paradise Race will finish in Sanya Serenity Marina in Sanya, and the fleet is expected to arrive between 21 – 25 February after roughly 23-27 days at sea. Although the finish line is still almost 4000 nautical miles away, crews are excited to explore Sanya and all it has to offer during the stopover, and you can find out more here

The slow start to Race 7: The Forever Tropical Paradise Race has continued over the last 24 hours with no…

A testing first 24 hours of Race 7: The Forever Tropical Paradise Race has seen the Clipper Race fleet make slow progress whilst at the mercy of a light wind lottery. With soaring temperatures to contend with and only a light breeze to fill the…

Race 7: The Forever Tropical Paradise Race to Sanya, China, officially got underway at 1400 local time (0400 UTC) today, with a Le Mans start in position S19 42.1 E150 31.7.After transiting the Hydrographers Passage which allowed the fleet to cross the shallow waters of…

Although Race 7: The Forever Tropical Paradise Race may only be in its opening hours, Dare To Lead…