Tomorrow, Sunday 4 March, sees the Clipper Race fleet take back to the water for the start of the eighth of 13 stages which make up the Clipper 2017-18 Race series; Race 8: The Sailing City Qingdao Cup.

Race day will get underway at 1100 local time (0400 UTC) with a special departure ceremony in the grounds of the Marina Industries Platinum Five Gold Anchor awarded Sanya Serenity Marina, to officially mark the end of the first Clipper Race stopover in Sanya, with each team taking to a stage before parading to their yachts.

Race 8 officially gets underway at 1430 local (0630 UTC), and as we look ahead here at what is to be expected from this race, it’s clear its set to be one of extremes. 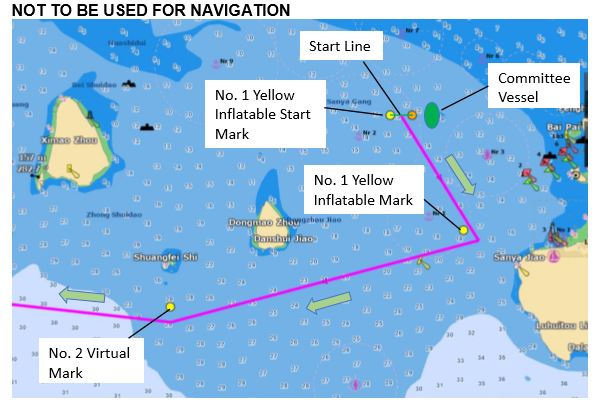 Heading from the warm, tropical setting of Sanya, crew should soak up the sun whilst they still can as temperatures will soon plummet as they race towards the wintry north of this vast country.

It’s not just the drop in temperature that will challenge however, as Race Director Mark Light explains: “The northerly route offers mostly upwind conditions due to tough head winds and choppy seas as the fleet makes its way around Taiwan, through the East China Sea, which can make life extra uncomfortable on board.”

However, the good news is that at approximately 1,600nm in length, this is one of the shorter races of the series, expected to take around ten days to complete.

Mark adds: “Due to the shorter mileage of this race, work ethic on board will be intense as Skippers and crew work round the clock to keep the boat racing as effectively as possible, knowing even small errors or lapses in judgement could make all the difference, not just to the points for Race 8, but also to team standings in the overall Clipper 2017-18 Race leaderboard.”

Concluding, Mark adds: “Weather conditions aside, one of the biggest challenges the teams will face during this leg is navigating the world’s largest fishing fleet.

“A huge industry in China, fishing boats can light up the entire horizon at night like a city so spotting vessels, lines or debris as they sail through will require focus, vigilance and clear communication. Finally, heavy fog and commercial shipping will challenge crew as they head across the Yellow Sea and into Qingdao.”

As always, Bonus Point opportunities in the Scoring Gate will offer teams a tactical conundrum and the Ocean Sprint will give a welcome points boost to the three teams with the fastest times to cross it.

For Sanya Serenity Coast, which has elected to play its Joker, Race 8 could prove to be a lucrative one when it doubles its race points.

Sanya Serenity Coast continues its overall Clipper 2017-18 Race lead but Qingdao is just one point behind, with Visit Seattle just four points behind in third. Only four teams; Qingdao (second); Dare To Lead (fourth); Garmin (sixth); and GREAT Britain (seventh); have opted to use their Joker Cards so far, meaning there are still plenty of gains, and losses, to be made in positions in this second race half.

The Clipper Race fleet is expected to arrive in Qingdao’s Wanda Yacht Club between 13 to 16 March, where Leg 5 completes and teams will enjoy more high level cultural events and hospitality before embarking on Leg 6, the North Pacific Ocean Challenge.

Watch out on the Clipper Race: LIVE Facebook page from 1100 local (0400 UTC) to see the teams take to the stage in the departure ceremony and slip their lines off the dock ahead of Race 8 start.

The Clipper Race has teamed up once again with the world’s leading and most experienced team of digital yacht racing game experts at Virtual Regatta and you can test your own skills in Race 8, without getting wet or cold, though it might not be quiet as exciting! Full details of all the features and how to play are available in the game website.