The forecasted light winds and the busy fishing fleet in the East China Sea continue to frustrate the teams on the third day of racing to Seattle. Culminating in a reshuffle of the leaderboard which sees Visit Seattle take the lead from close rival Qingdao.

Despite a successful day both Visit Seattle and Qingdao Skippers reported that it had not been uneventful. Chris Kobusch, Skipper of Qingdao, said: “The wind died right off last night and for a few hours we drifted north. Since then it has been a struggle to keep the boat moving in the right direction, but the deck team did a great job and only Visit Seattle, who managed to overtake us, had a better run so far.”

The Clipper Race fleet remains close together with less than 50 nautical miles separating all the teams. Skipper of third placed Unicef, Bob Beggs, describes the current conditions and difficulties the fleet is facing: “Another beautiful day following a night of light wind sailing with wind speeds fluctuating between 0 and 4 knots with boat speeds to match.

“Still we are in good company with half of the Clipper Race fleet visible on AIS doing similar routes when the wind drops below 2 knots and we lose the ability to control the direction the bow is facing.” 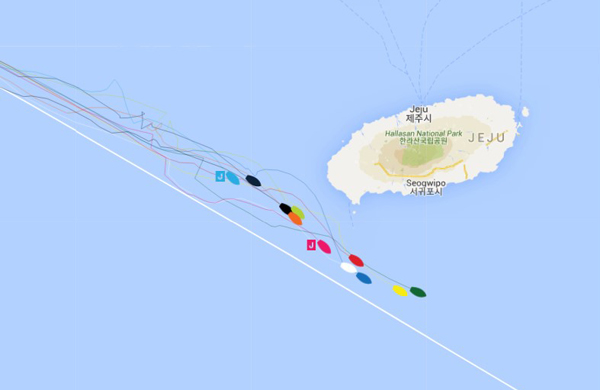 IMAGE: Positions at time of pubishing

For the PSP Logistics team, their encounter with a fishing net brought the yacht to a complete stop but, even though they dropped to fourth, Skipper Matt Mitchell remains positive saying: “This escapade has cost us dearly in position however if it was going to happen, very early on in the race is the time for it to happen. The forecast still has us in very light wind for the next day or two so the light wind lottery is far from over.”

Dare To Lead and Liverpool 2018, in fifth and sixth respectively, also reported a painful 24 hours negotiating fishing nets with very little wind. The warmer sunnier weather however has burnt off some of the fog and leaves conditions on deck much more pleasant.

For HotelPlanner.com, in seventh, this - and the lack of wind - has given the team time to work on further preparations for the heavier weather expected to come. Skipper Conall Morrison said: “Last night’s slow speed frustrations quickly melted this morning as the sun has burned off the fog and warmed up the deck. Port Watch and the sail ‘love and care’ team headed up by Mary Frawley helped by Bosun Nic Schellenberg designed a downhaul system for taking Yankees down in heavy weather.” 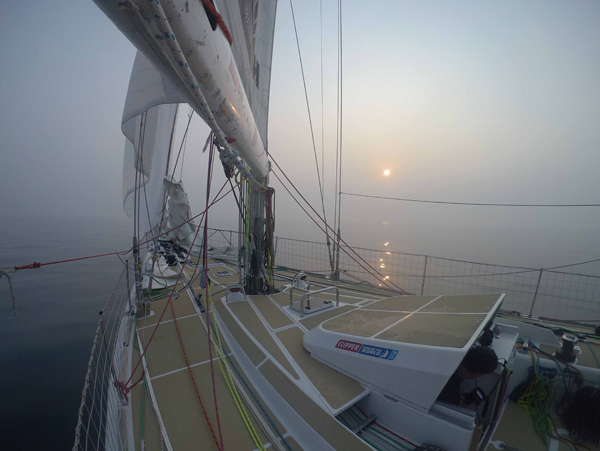 Sanya Serenity Coast has dropped a position to eighth, but Garmin has climbed a position to ninth. Both Skippers report that their new crew are settling in well but hope for more wind, with Sanya Serenity Coast Skipper Wendy saying: “The new crew have settled in already, always a tad easier when not walking around at a 45-degree angle. Not much else to say, it really is Groundhog Day. Don’t know if Seattle is getting any closer, it certainly doesn’t feel like it.”

Skippers of tenth placed GREAT Britain, David Hartshorn, and eleventh placed Nasdaq, Rob Graham, remain frustrated by their boat speed and distance they are covering. David, not inspired by what the wind is expected to do over the next few days, said: “It looks like we will have this light variable wind until at least 0000Z on 29 March. The reason is the high-pressure system centred over the Yellow Sea.

“I think we are a good few days away from reaching the “Mighty Pacific” yet. We are still 300nm north west of Mandatory Gate Johnston at the south west corner of Japan.

His analysis is backed up by Clipper Race Meteorologist Simon Rowell who reports that that high is still high and not moving anywhere fast so it will be another slow day for the teams.

NAME: Annie Neeson AGE: 37NATIONALITY: BritishOCCUPATION: DoctorLEGS: Leg 6,7,8 TEAM: Sanya Serenity CoastFor many, deciding to take part in a challenge such as the Clipper Race is all about timing. That’s certainly the case for 37-year-old Annie Neeson who arrived in…