China’s Sailing City put on a stunning display for the arrivals of the first four teams into Qingdao, with delegates from the city joining them on stage and over one hundred drummers lining the pontoon to form a guard of honour as the crew disembarked the yachts.

Winner Derry~Londonderry~Doire was first to sail through the Olympic Rings and Torch, a reminder of the city’s role in the 2008 Beijing Games, with fireworks heralding their arrival into the marina. At hourly intervals the winners were followed by Garmin and LMAX Exchange to complete the podium and Mission Performance followed in the early afternoon.

The Sailing City • Qingdao Cup is a second win in a row for Skipper Daniel Smith and his crew, who also managed to pick up maximum points at the Scoring Gate and Ocean Sprint. Dan says: “We are really glad to get the clean sweep and so happy that our hard work paid off. In the last race we managed 16 points so getting 17 this time was very satisfying. We are working our way up the leaderboard so it’s a good place to be.

“This is my first time in Qingdao, what a welcome. It really is great to be here. We certainly feel this has been the hardest race of the series so far. We had very light winds which are tricky to keep the boat moving in, and we had storm force winds as well so it has been very, very hard on the crew who all worked fantastically hard, and I’m very proud of them.”

On the stage, officials presented Skippers Dan, Ash and Olivier with long cloaks and a staff, a Chinese tradition for returning warriors, to mark the achievement of their Clipper Race challenge. Before the Stormhoek bubbly was sprayed, all the teams were then given red scarves and cuddly toy monkeys and told: “This year is China’s year of Monkey, and monkeys are deemed clever. By presenting you these cute mascots, we wish all the brave sailors a lucky New Year and all the best!” 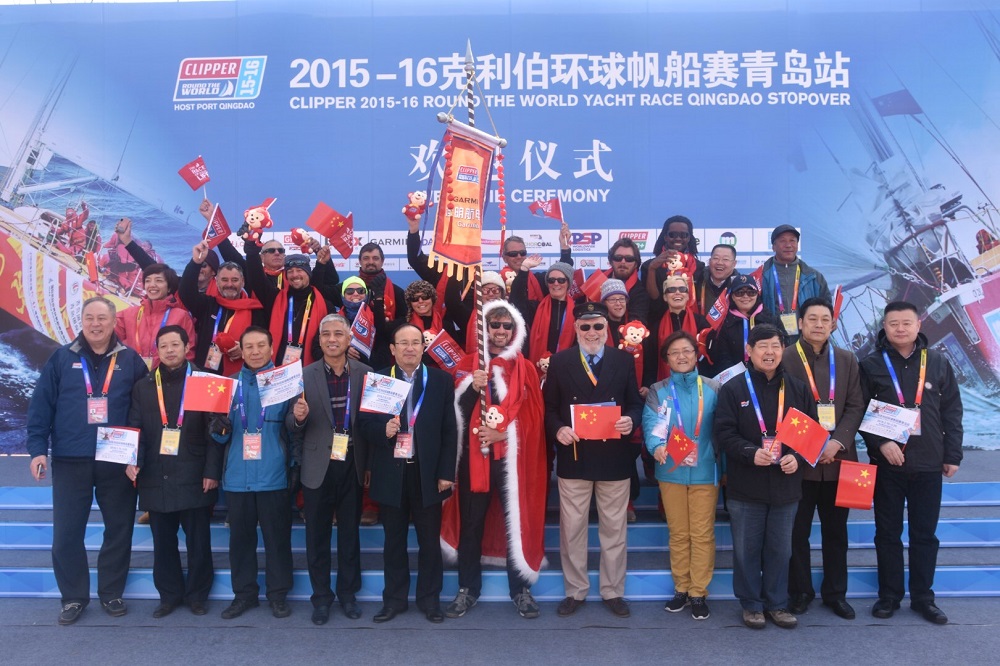 Celebrating his team’s third consecutive podium finish, Garmin Skipper Ash says: “It is great to be here. In one word I would sum this race up as varied. We’ve had pretty much every navigational challenge you could imagine out there, including fishing fleets and a quite severe storm actually, so it has been pretty tough going but we’re really happy to be here and we worked really hard. We got the boat here in one piece and that is the main thing but to get a podium place for the third time in a row is really great. We’re really happy with that.

“We’ve broken the curse for third place and now we have to break the curse on second place. I really do feel like it is only a matter of time until we that top spot, We were leading for a while on this race but unfortunately we ran into a bit of a wind hole which set us back a bit and Derry~Londonderry~Doire came from nowhere and took us a bit by surprise. We’ll learn from it and we won’t let it happen again. First place is only a matter of time away.”

The fleet battled a storm with gale force winds in the Yellow Sea days before crossing the finish line and the route from Da Nang threw up new obstacles for the crew with busy traffic and fishing nets scattered across their route. 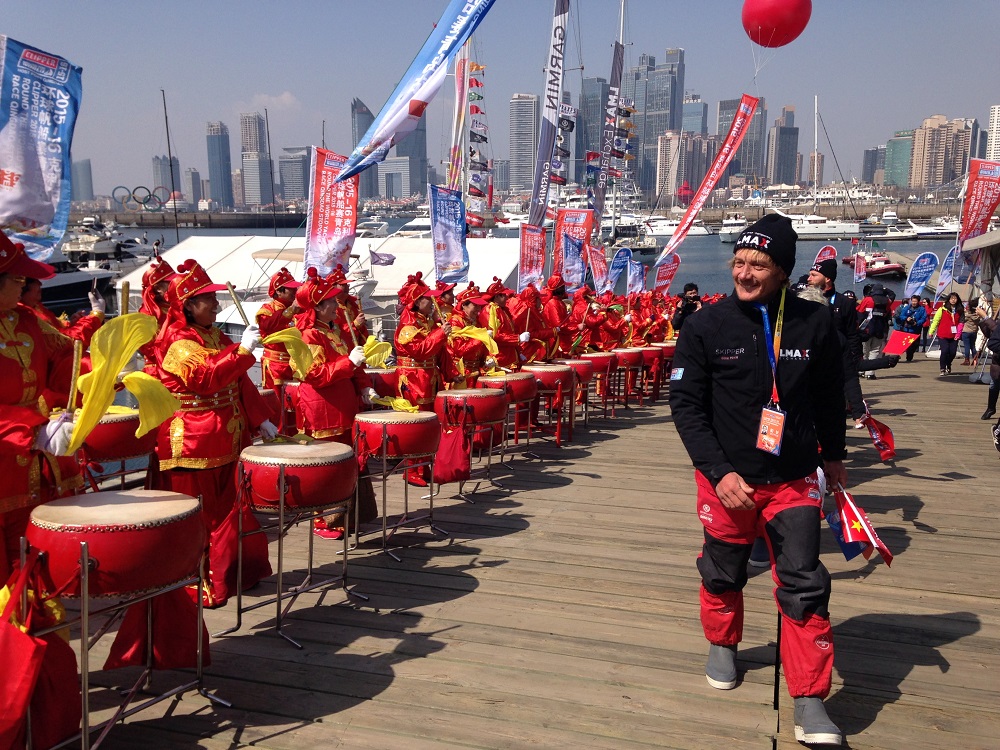 Happy to return to the podium after a fourth place finish in Race 7, LMAX Exchange Skipper Olivier Cardin says: “I definitely agree that this race has been one of the toughest so far. It was a short one so we had to concentrate hard from the very start and you don’t sleep much because every mile counts. It was very close. We had light winds, too much wind. The storm was huge and was long, about six hours so it was very tiring. That was one of the hardest nights on the boat so far.

“At times the forecast was not quite what we ended up with at times which made it very hard to choose the right sails and meant we changed our sails a lot. One day we made about 15 head sails and about 15 spinnaker changes so all the crew have pushed incredibly hard. 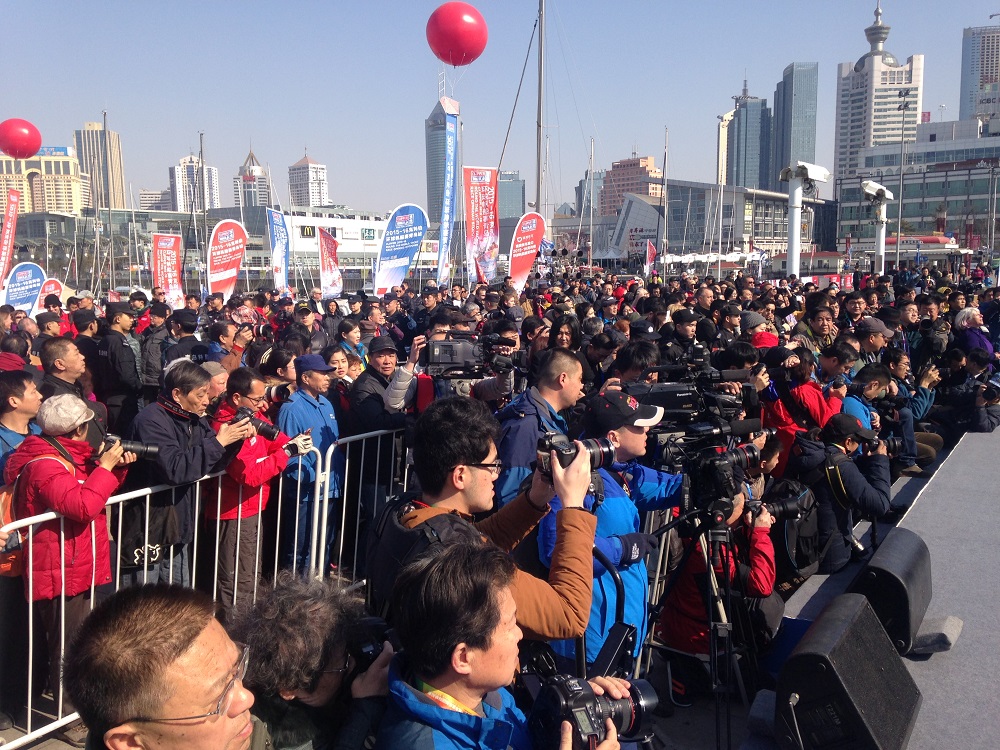 “We were very happy to just cross the finish line in the end. Even last night with just 20 miles to go the wind turned very light and once again we had a final challenge to just keep moving. We are pleased to be back on the podium.”

The next arrival was fourth placed Mission Performance, equally its highest finish in the Clipper 2015-16 Race so far and Skipper Greg Miller is thrilled that the team is back on form.

"It’s brilliant to get to Qingdao, I’m really elated to be here, especially after a couple of bad runs. But we are back on form now and this is where we are staying.

"We thought we might lose out to GREAT Britain but we managed to hold it. Everyone is really happy. It’s a completely different team to the last race we had, different not in people but in our outlook and what we want out of it. "I’ve never been to Qingdao but I’ve heard lots of great things about this stopover so I’m looking forward to it," Greg added.

GREAT Britain became the fifth team to cross the finish line at 1336 local time (0536 UTC) and arrived into Qingdao just within the daylight cut off period.

Skipper Peter Thornton explained: "The Yellow Sea is not my favourite sea anymore but it yea, it has been interesting race. Short but tough. I was certainly surprised by fishing nets and the weather forecasting was not quite as experienced, not that that was a surprise, but it certainly made it tougher.

"I think getting just out of Da Nang was hardest for us actually. There were quite alot of colds and flu going about on board and we got straight into some really heavy weather. For me that was probably even tougher than the storm we went through three days ago actually.

"It’s a shame we didn’t finish higher as we were looking pretty good there for a while but some really light weather really curtailed things at the end for us. We have a very long way to go now. I had high hopes for this race but it didn’t really turn out as I had hoped unfortunately. However we have arrived just in time to be able to come in tonight which is a bonus, and I’m already looking forward to getting back out there for our next challenge. 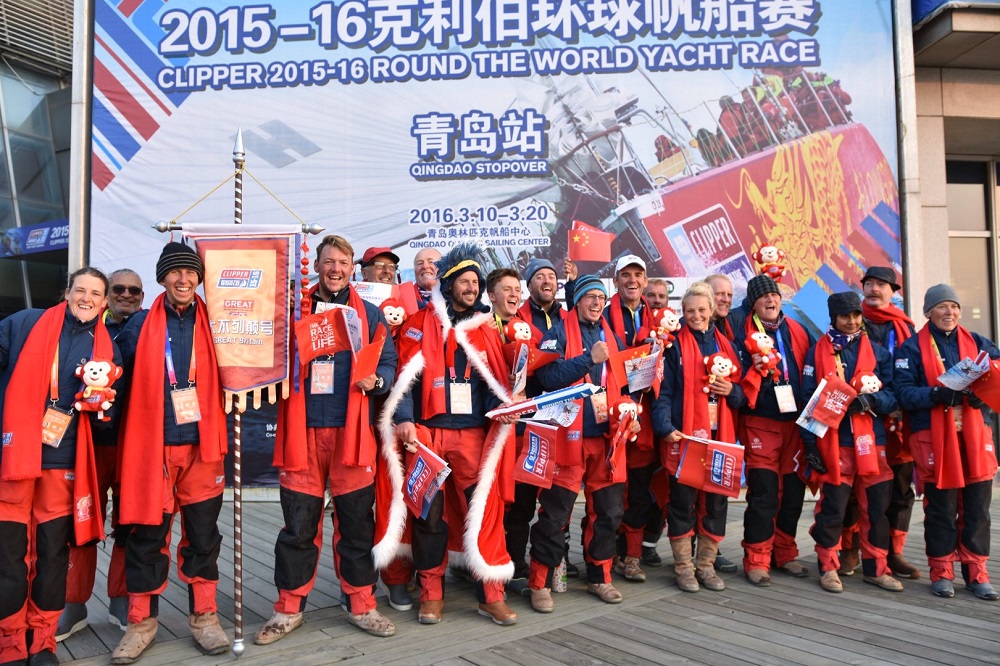 This is not Peter's first time to Qingdao as he explains: "I was here in 2004 as Navigation Officer on RFA Grey Rover on its Far East Tour with HMS Exeter, and spent a week here in Qingdao. A place I wasn’t sure I would ever come back to but it is lovely to return. The people here are always so nice."

You can watch today's arrivals which were posted live on Periscope. Follow @clipperrace on Twitter where the videos can be viewed back for 24 hours after they are first filmed.

To keep track of the rest of the teams as they approach the finish line stay tuned to the Race Viewer and the latest ETAs will be updated here.

To find out more about what is planned for the Clipper Race crew in Qingdao, click here.

The countdown is on for the teams still racing and battling upwind in icy conditions to make it to Race Finish in Qingdao having come through the violent storm yesterday. LMAX Exchange looks set to take third place in The Sailing City • Qingdao Cup,…