Seattle’s maritime history and adventurous spirit goes hand in hand with the Clipper Race and we are pleased to reveal that the American city will once again feature as a Team Partner and Host Port during the Mighty Pacific and All-American legs of the 2017-18 race.

The announcement was made today by the Official Tourism Board, Visit Seattle, supported by its partners Seattle Sports Commission and the Port of Seattle.

“The Seattle stopover certainly made its mark on our international race crew, friends, family and business partners during the last race and I am pleased that we will return to the Emerald City once again,” said Sir Robin Knox-Johnston.

“Like our race crews, the people of Seattle have a strong sense of adventure and the support received from the city and its residents as the fleet raced around the world was fantastic. The welcome and hospitality provided by locals and businesses during the race’s visit to Seattle was first-class and has put the city firmly on the map as a popular race destination to visit and do business with and we hope to build on the relationships created.”

Making its debut in the 2015-16 edition of the race, which saw the city’s name and iconic skyline emblazoned on one of the race’s twelve 70-foot ocean racing yachts, Visit Seattle promoted the city as a destination for leisure, tourism and business. 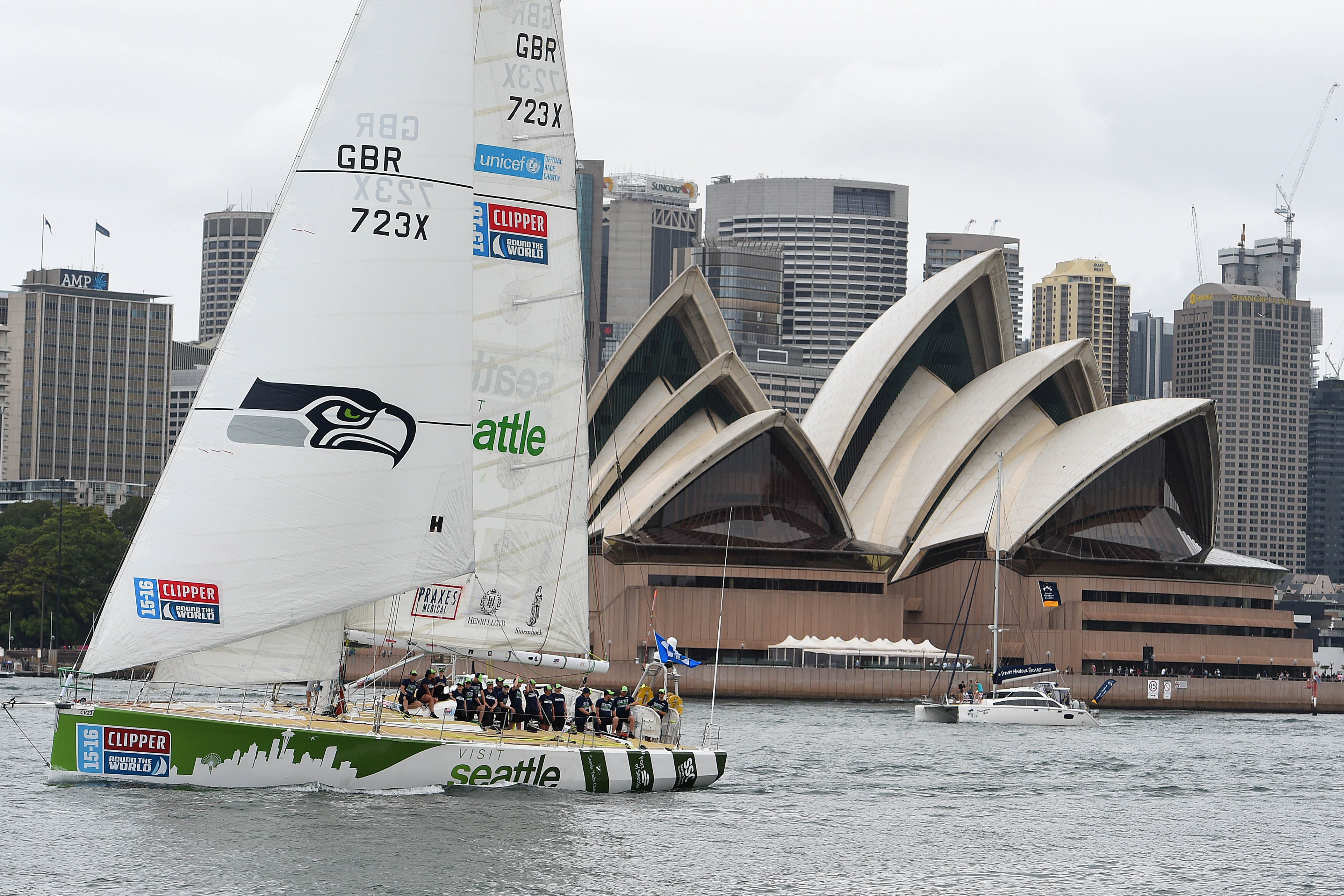 Visit Seattle shows its support for the city's NFL team the Seahawks in Sydney during the 2015-16 race.

A city on the leading edge of innovation, Seattle is home to some of the world’s biggest corporations and has global reach as a place to do business, live and visit. Representing the city in the 2017-18 edition, Visit Seattle will engage with international Clipper Race partners and provide opportunities to increase international trade links with the US.

The city aims to build a legacy following the relationships made through direct engagement with companies, cities and countries on the Clipper Race route.

“Participating as a partner of the Clipper Race is about much more than logos on a yacht,” said Ralph Morton, Executive Director of the Seattle Sports Commission.

“It is an authentic platform for delivering our message of Visit Seattle around the globe by embracing the individual stories of our crew and ambassadors, as they achieve a once in a lifetime adventure. The city of Seattle will embrace the fleet as it enters the stunning Puget Sound, providing a festive stopover with so many unique experiences for our guests and memories that will last a lifetime.”

The twelve Clipper 70s, will berth at the Port of Seattle’s Bell Harbor Marina in April 2018 after completing the Mighty Pacific leg.

A month-long race, teams will battle against 5,600 nautical miles of the North Pacific Ocean from Qingdao, China, to Seattle, WA, before setting off on the next stage of the Clipper Race to New York City, via the Panama Canal. 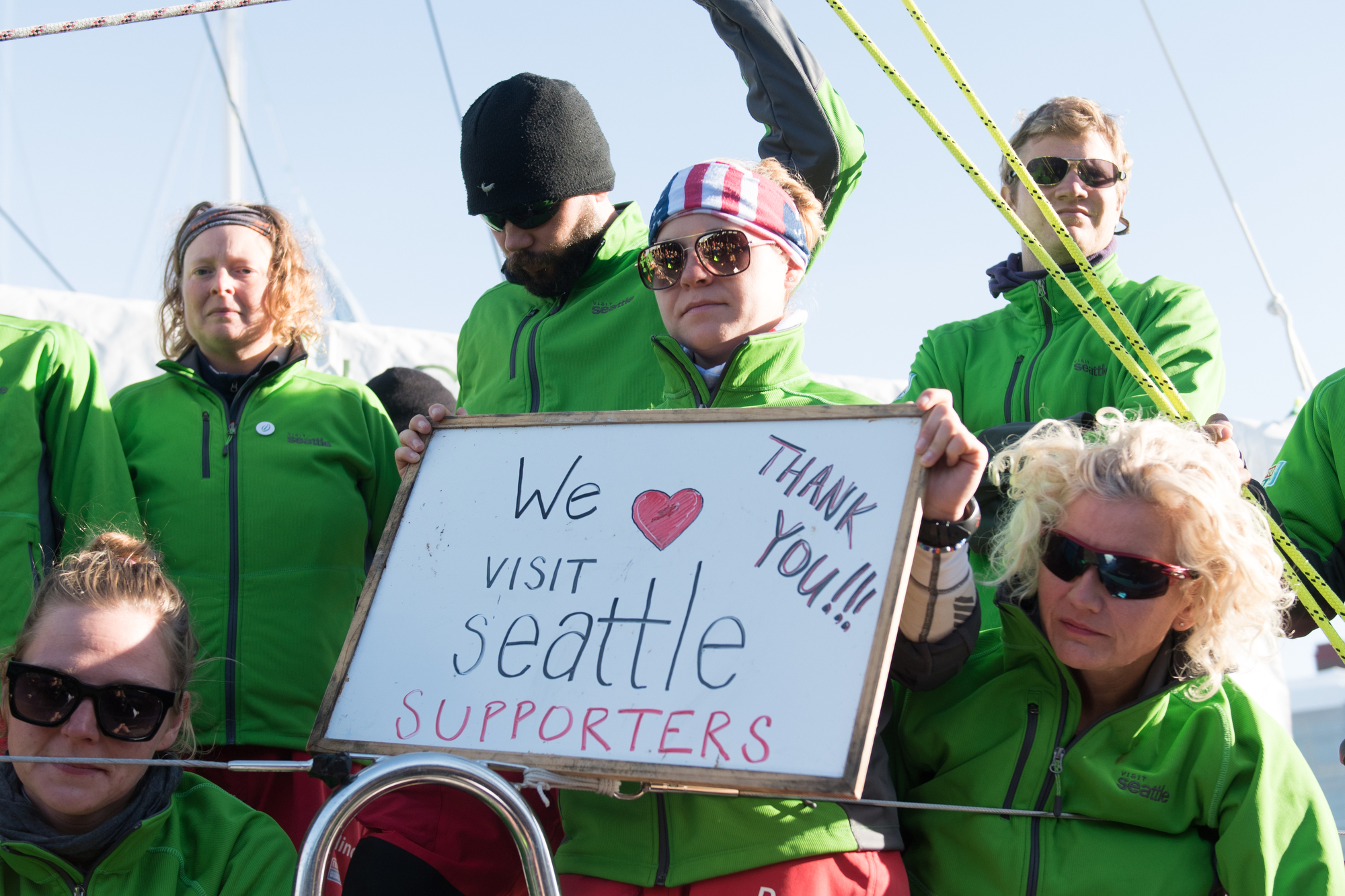 The Visit Seattle team arriving into its Home Port in 2016

Experiencing the warm welcome of Seattle in the last edition of the race, circumnavigating crew member, Karri Palts, a 31 year-old Estonian who represented the city on board Visit Seattle, said: “After the incredibly tough Pacific crossing, arriving into Seattle was the warmest welcome I could have imagined, it was as good as arriving home. I cannot imagine anyone not feeling at home in Seattle. The region and its people showed their interest and during our stay I felt that was reflected in the vibe of the city.

“I feel lucky to have been able to sail around the world representing a city that so shared our own core values as a team: a sense a curiosity and commitment to learn, a celebration of joy, an appreciation of the nature around us, an unprecedented equality, and a one-for-all-all-for-one mindset,” she adds.

Following the success of the partnership, fifteen crew members from Washington State, including six from the city of Seattle itself, have signed up to participate in the 2017-18 race edition.

WATCH: Highlights from the Seattle stopover in 2016

The Clipper 2017-18 Race is currently 90 per cent full with limited availability. If you would like to take part in the race and Visit Seattle, apply here.

The teams have departed Bell Harbor, Seattle, and have been putting on a show in front of crowds watching the…