Two of the youngest crew members of the Clipper 2017-18 Race have completed their ocean adventures after reaching Qingdao and have been reflecting on their achievements– and the contrasts that they have experienced - since starting their respective race campaigns in Australia. 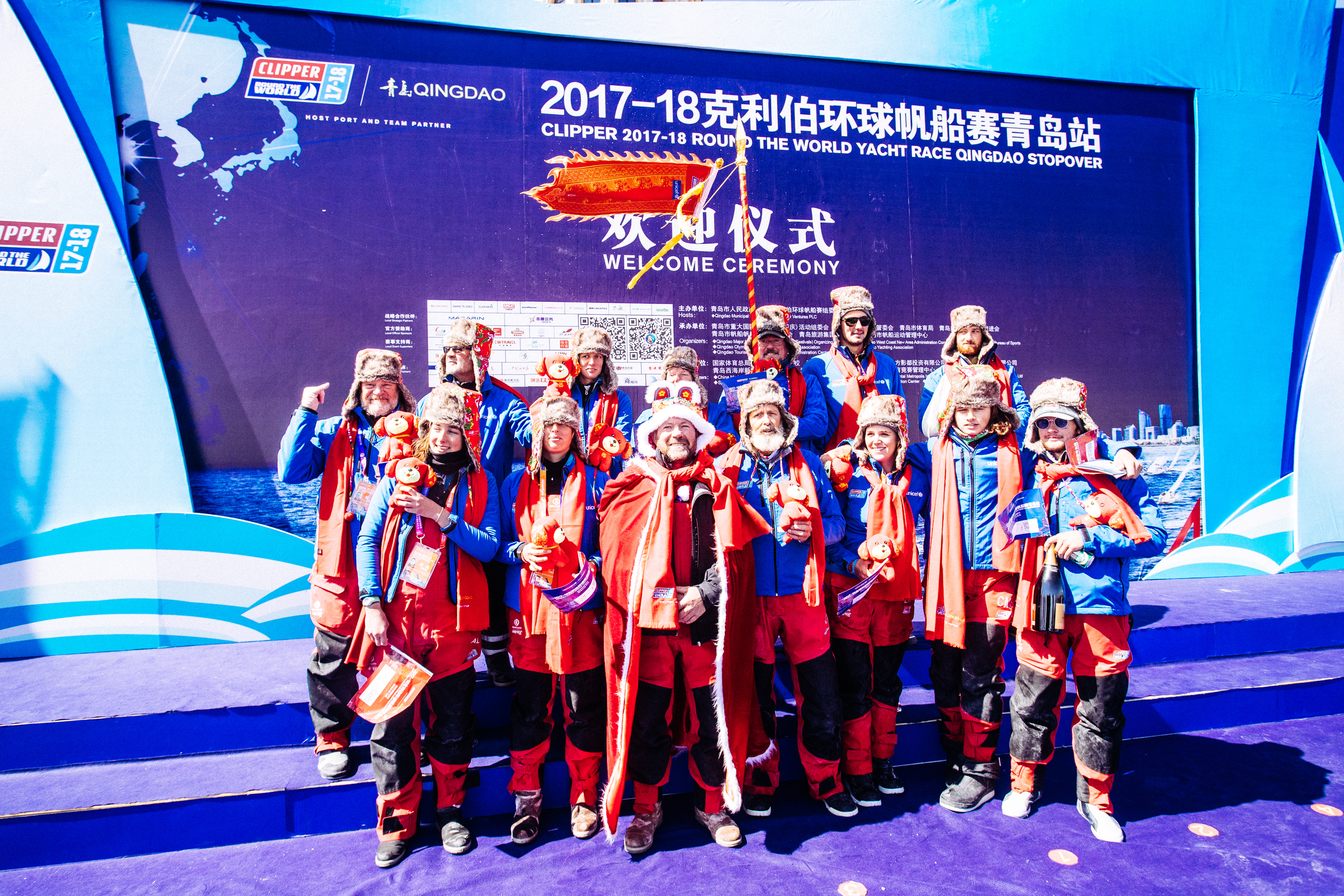 Cameron McCracken joined Unicef in Fremantle, Australia, to take on Leg 4 and 5, and turned 19 just before arriving into Sanya. Summing up his whole experience, he says: “It’s just been ridiculously different – a big crew on Leg 4, a small one on Leg 5; the heat and the cold; the waves and the flat. It’s all so different and it’s just been brilliant. And the people make it.”

One of his crew members on board Unicef for Leg 5 was Tom, who is just 18 and joined in Airlie Beach. Although he was a bit apprehensive before starting Races 7 and 8 – it was a mixture of nervousness and excitement – and he said: “The races were brilliant – absolutely amazing and there were big contrasts between them. Race 7: you’ve got the long monotonous doldrums and getting through that, sweating buckets quite literally. 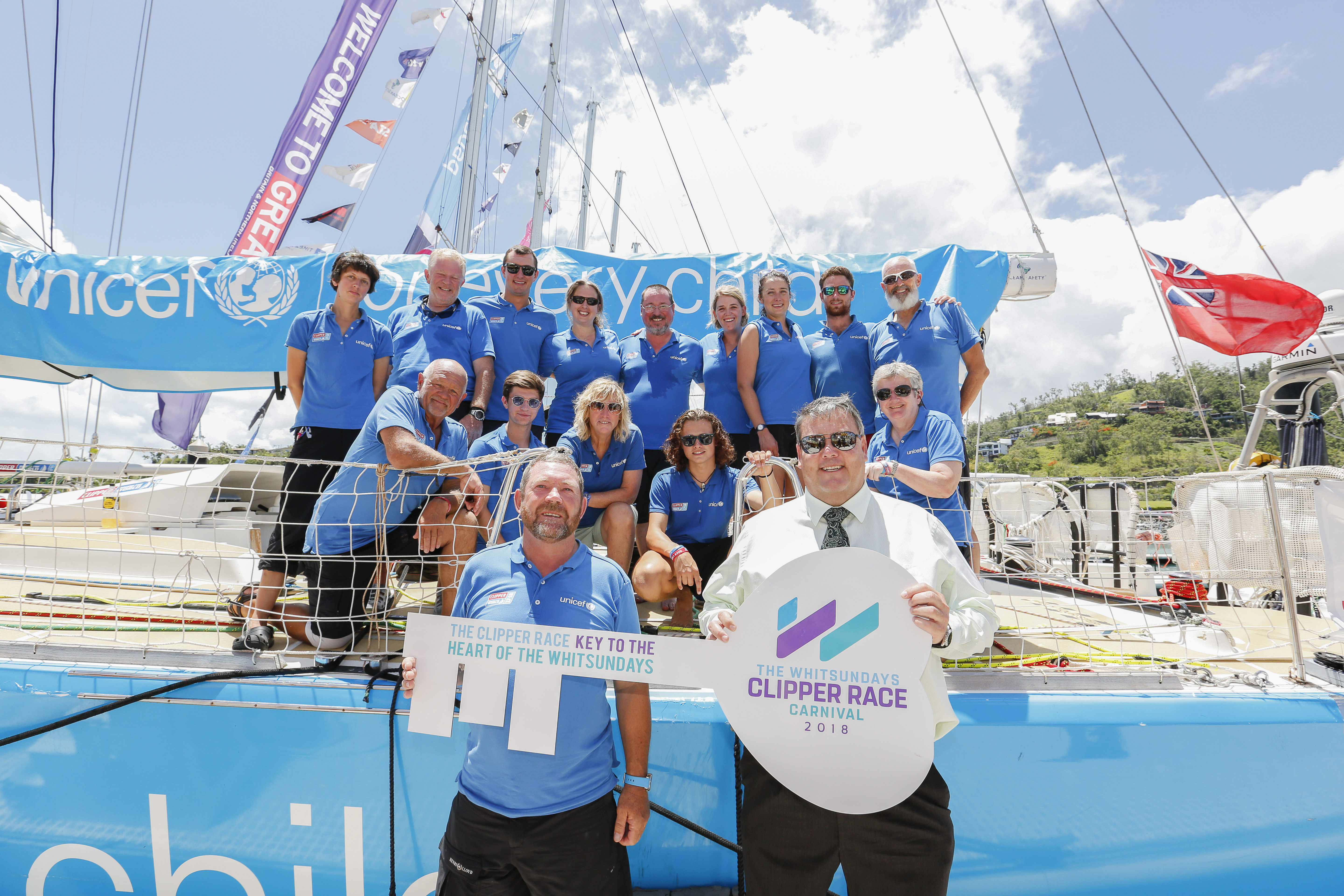 "And then Race 8: beating upwind although a bit of downwind sailing as well and, by the end of it, freezing. As we were hammering across the line, my fingers were frozen through to the bone, it was crazy.”

Before the cold, came the heat and this was the part that Tom struggled with the most, recalling: “Not moving in the doldrums in the heat in Race 7 was one of the hardest things I’ve ever done. You kind of don’t remember it properly because it all blurs into one and you don’t remember all the good stuff.

“Being on deck thinking that you know you want to go to bed and snuggle up but there’s nowhere to really do that and nowhere to get away from the heat. But as soon as you come on deck and watch the sunset, you think ‘this is amazing’ again. I’d rather not be anywhere else.” 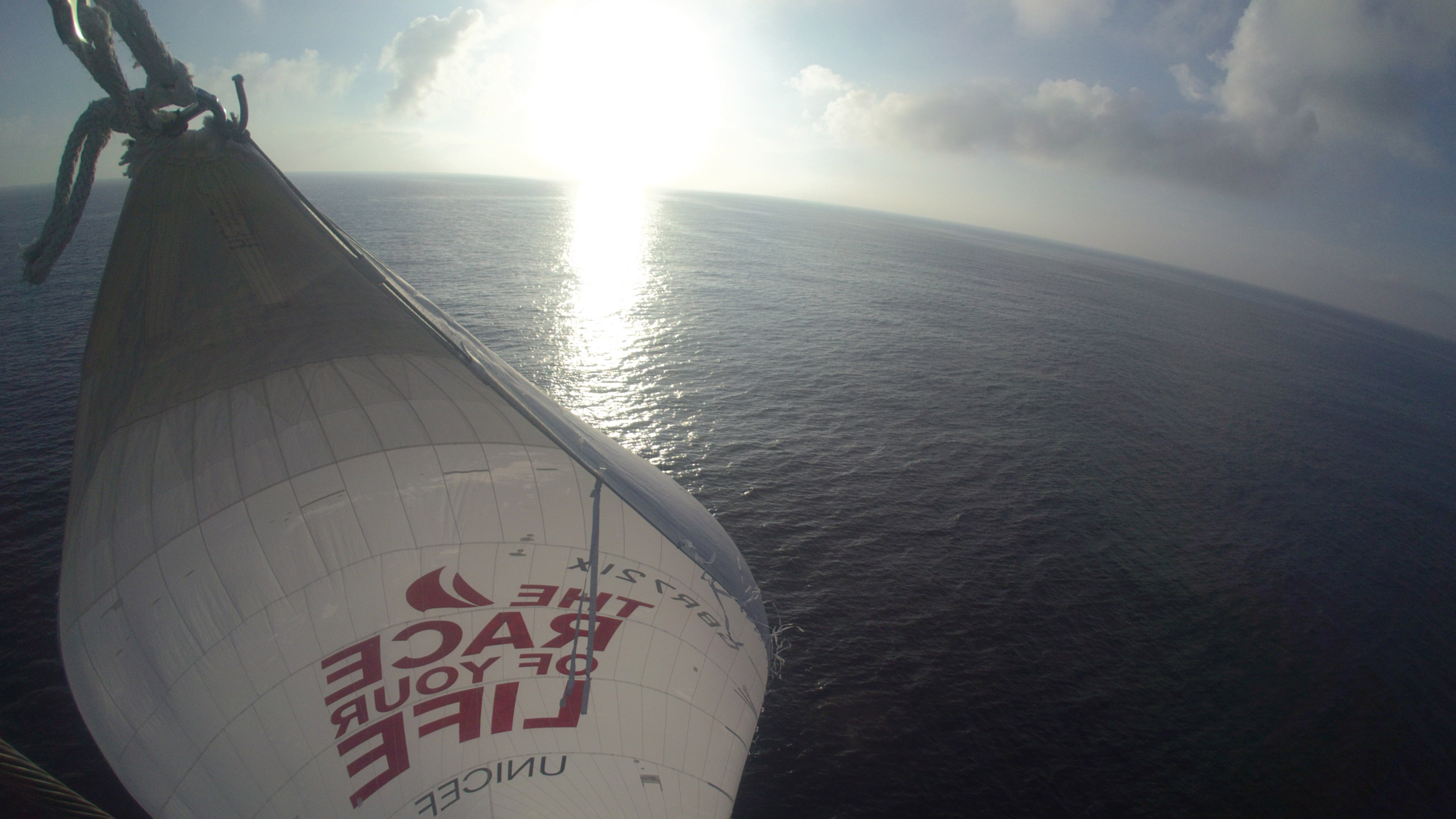 IMAGE: Photo taken by Cameron from top of the mast during Leg 5.

Tom and Cameron bonded over their love of music whilst waiting for the rain clouds to relieve them from the heat, as can be seen in this crew diary. When asked if being the younger crew members on board made their experience any different, Cameron joked: “I’m relatively old – I’m 19 – so you’ll have to talk to Baby Tom! Seriously though, there’s no concept of age on the boat – there’s no prejudice of any form. So long as you get stuck in, no one has any qualms. It’s when you don’t that there might be an issue. You just have to pull together.” 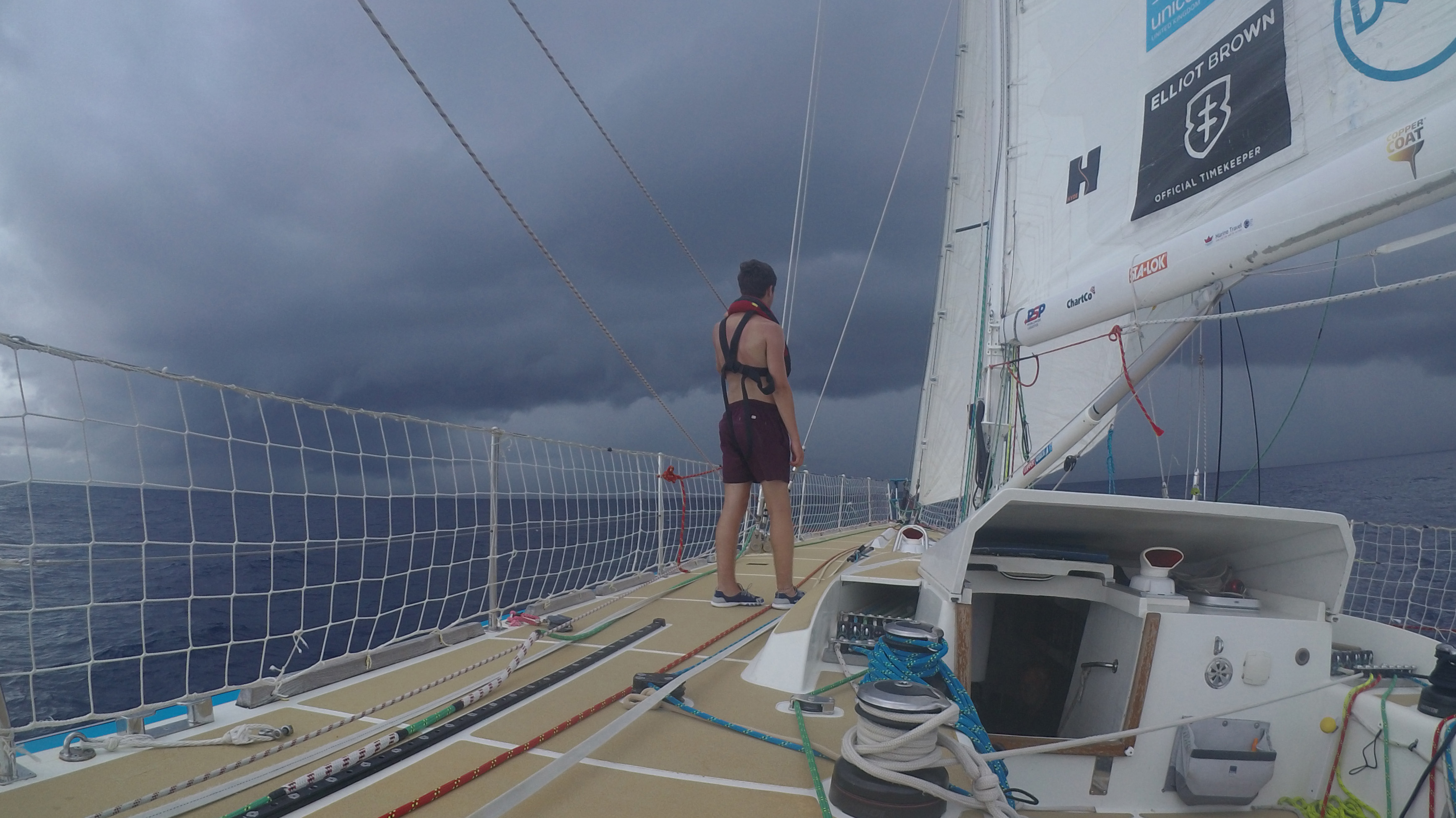 IMAGE: Tom waiting for the rain clouds to arrive during Race 7.

Tom added: “Sailing with Cam was absolutely amazing but equally I didn’t feel like I needed to sail with someone else that was young. I thought everyone was so easy to relate to and so easy to get on with, especially the crew that we had was exceptional.”

Now that they have completed the legs that they had signed up for on the Clipper Race, it feels a long time ago since they both applied. Tom says: “I was on my way up for a university visit in Manchester and I was on the London Underground, saw the Clipper Race advert, thought that looks kind of cool – and my Dad did the Tall Ships Race when he was about 18 or 19, around my age – so I sent an email, got myself an interview, ran it past my parents and luckily they said ‘yeah, go for it!’ The rest is history – here I am.” 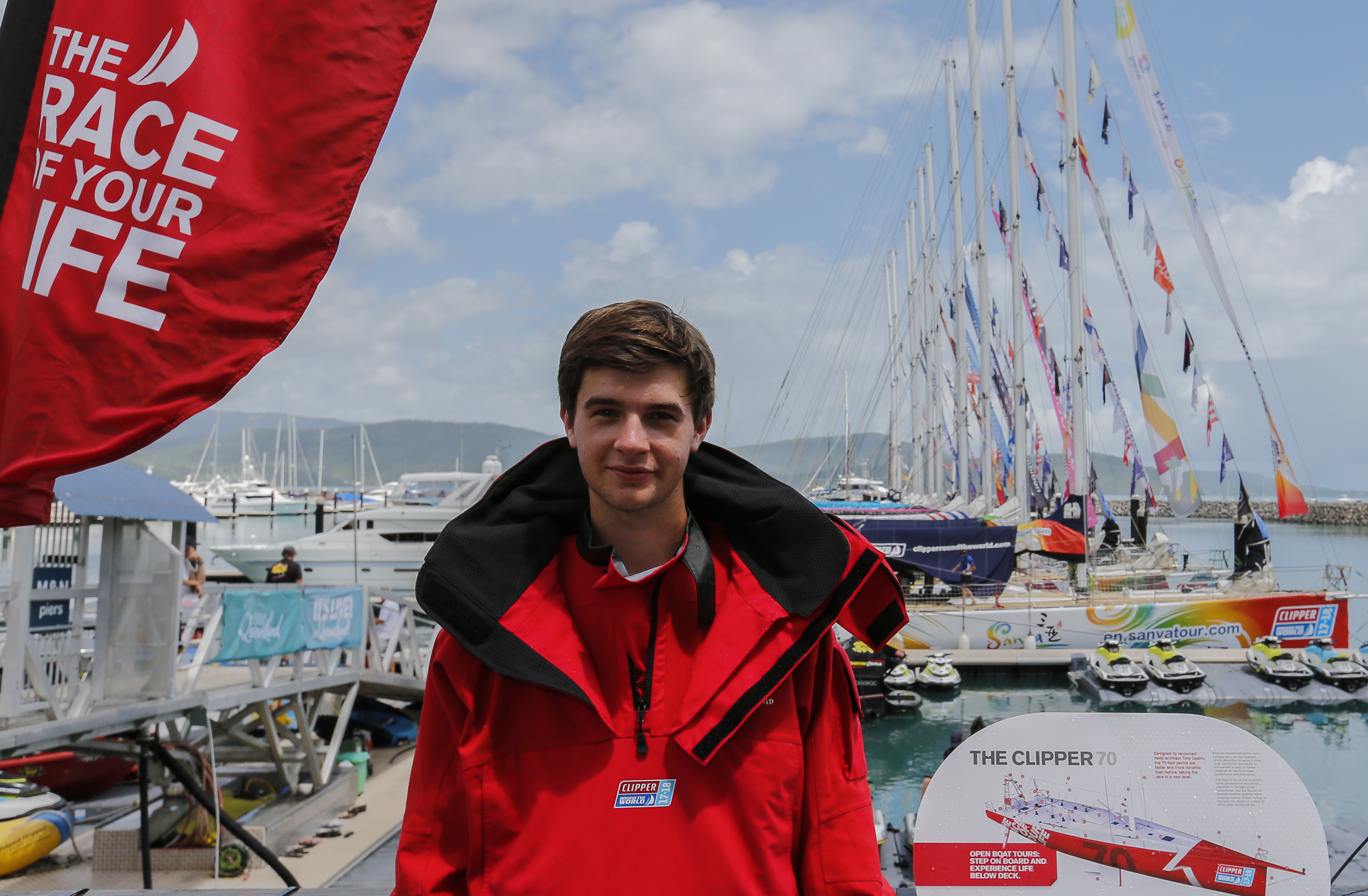 IMAGE: Tom before starting his Leg 5 adventure in Airlie Beach

Reflecting on what they have achieved since then is pretty remarkable considering Cameron had not sailed at all before staring his Level 1 Training and Tom only had dinghy sailing experience from around eight years ago, when he completed his RYA Level 2.

Being fresh off the boat, they are yet to notice the difference in themselves but appreciate the support that their parents have given them. Cameron says: “I put in my last blog that my mum will be relieved that I’m not on the boat but I think that they’re proud.”

Tom adds: “I’d say the same. When I got off, my mum met me in Qingdao and she didn’t recognise me at first and that I had really matured! It’s certainly something incredible to do with your gap year before university – it’s something pretty solid, its and constructive and pretty awesome at the end of the day.”

Both recognise that they have been lucky to get the opportunity to take part in a yacht race around the world and recommend to others to get involved. Tom says: “Just do it – you’ll regret not doing it. Just say ‘yes’ and at least do some training and get involved. Because if you don’t try and you look back on it, you’ll only regret not trying.” 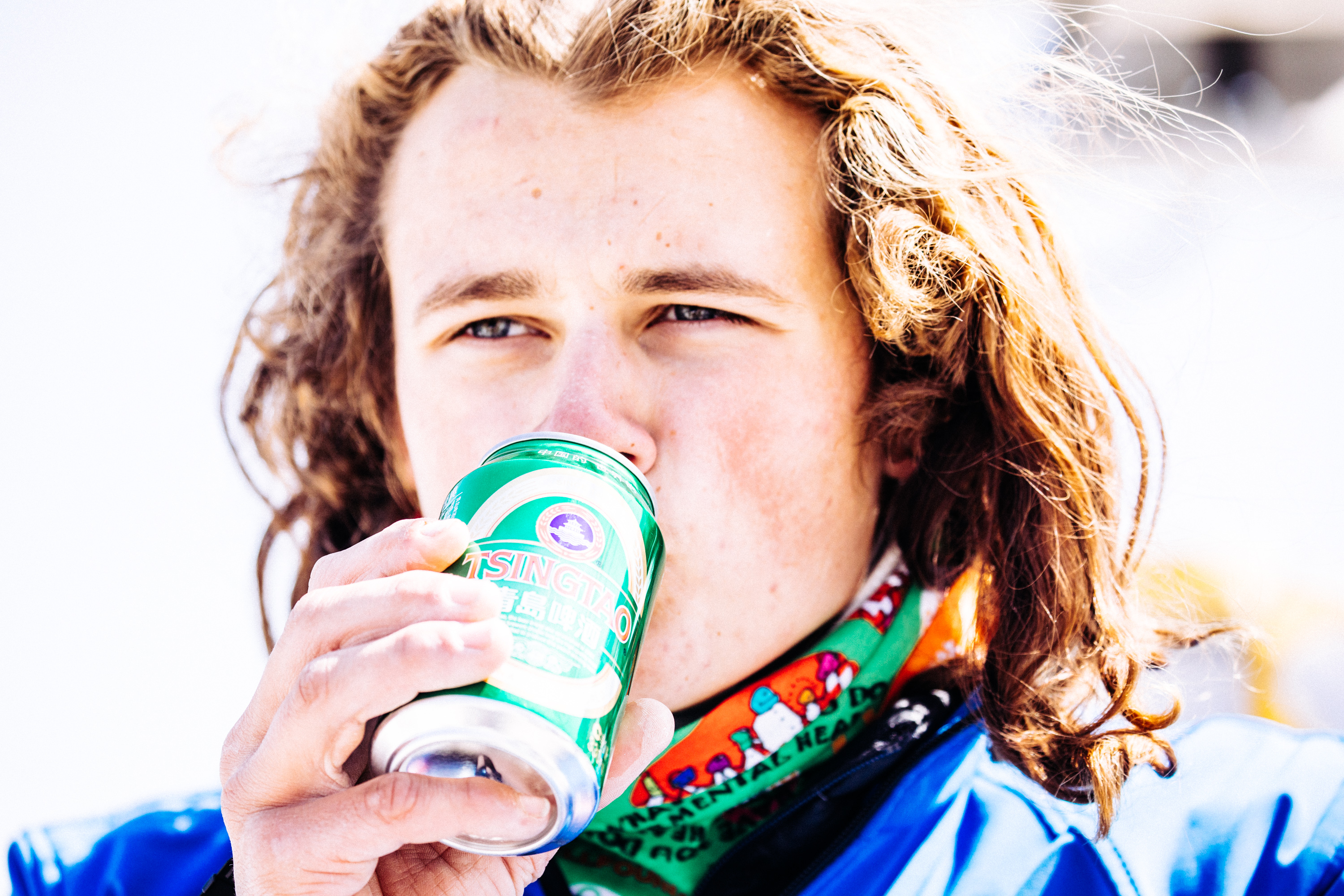 The challenge of their lives…so far

For Cameron and Tom, the Clipper Race is just the beginning of exciting challenges to come. Cameron has been inspired by sailing and, after he’s completed a ski season, wants to complete his RYA Yachtmaster qualifications before hopefully becoming a Skipper….one day.

Tom meanwhile will be doing some more travelling – he had never been out of Europe before the Clipper Race – before studying Biology at Cardiff University. He says: “Marine Biology has been at the back of my mind so being in Airlie Beach, seeing all the coral and all the fish has been absolutely amazing. I also did a tour to Cape Tribulation – one of the world’s oldest rainforests around here with prehistoric plants – it’s just so interesting.”

Tom also hopes to complete his RYA Yachtmaster qualifications and wonders whether he and Cameron will one day sail around the world together.

So, has the Clipper Race been the start of a life-long friendship between the two….?

“For sure, he seems pretty decent…” Tom says.