It has been a day to remember at Wanda Marina and Yacht Club on Starry Island in Qingdao’s West Coast New Area. Not only is it the first time that a full ocean racing fleet has been berthed in the brand-new facility, but the close finishes throughout the eleven teams was testament to the well-matched competitive level of racing seen consistently throughout each of the eight race stages of the Clipper 2017-18 Round the World Yacht Race so far.

After the podium teams, plus fourth placed PSP Logistics, fifth placed Qingdao, and sixth placed Garmin arrived on Thursday, Nasdaq was the first team to arrive into the marina on Friday. The team crossed the finish line at 09:08UTC (1hr 45min with redress applied for Watermaker part transfer with Qingdao) on Thursday 15 March to take seventh place, its second best result of the Clipper 2017-18 Race so far.

On arrival, 29-year old Nasdaq crew member Abby Johnston, a Rowing Coach from Great Britain said: “It was cold and very windy but it was all good. The race was really hard work but the team worked well together to get a good result. When we started it was really warm and then in the last day or so has been particularly cold, but there has been a real mix of conditions on this race.”

The Nasdaq team, led by Skipper Rob Graham, were greeted by a sunny morning with temperatures close to freezing, as well as the incredible Qingdao Welcome Ceremony that started with a traditional procession from the Clipper Race pontoon up to the arrival stage with 60 drummers and groups of dancers. 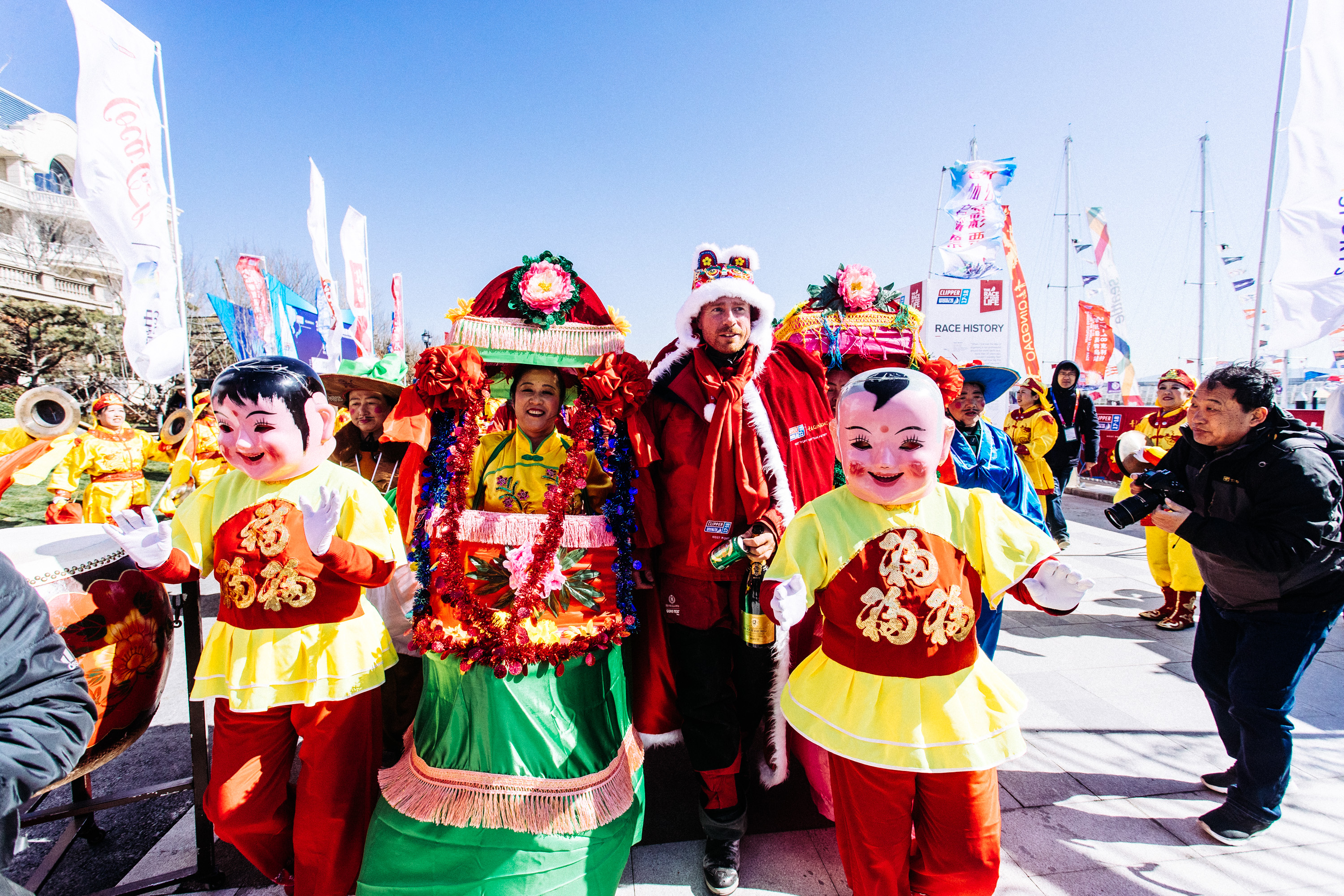 Finishing the race 1 hour 48 minutes after Nasdaq was eighth placed GREAT Britain which finished the Sailing City Qingdao Cup at 18:56 local time (10:56 UTC) after a solid performance from the team, which excelled during the opening stages of the race by covering the most miles of the fleet during on the second day of racing.

The team’s strengths continued throughout the race, picking up two bonus race points for reaching the Scoring Gate in second place, equalling its best Gate result in Race 1. 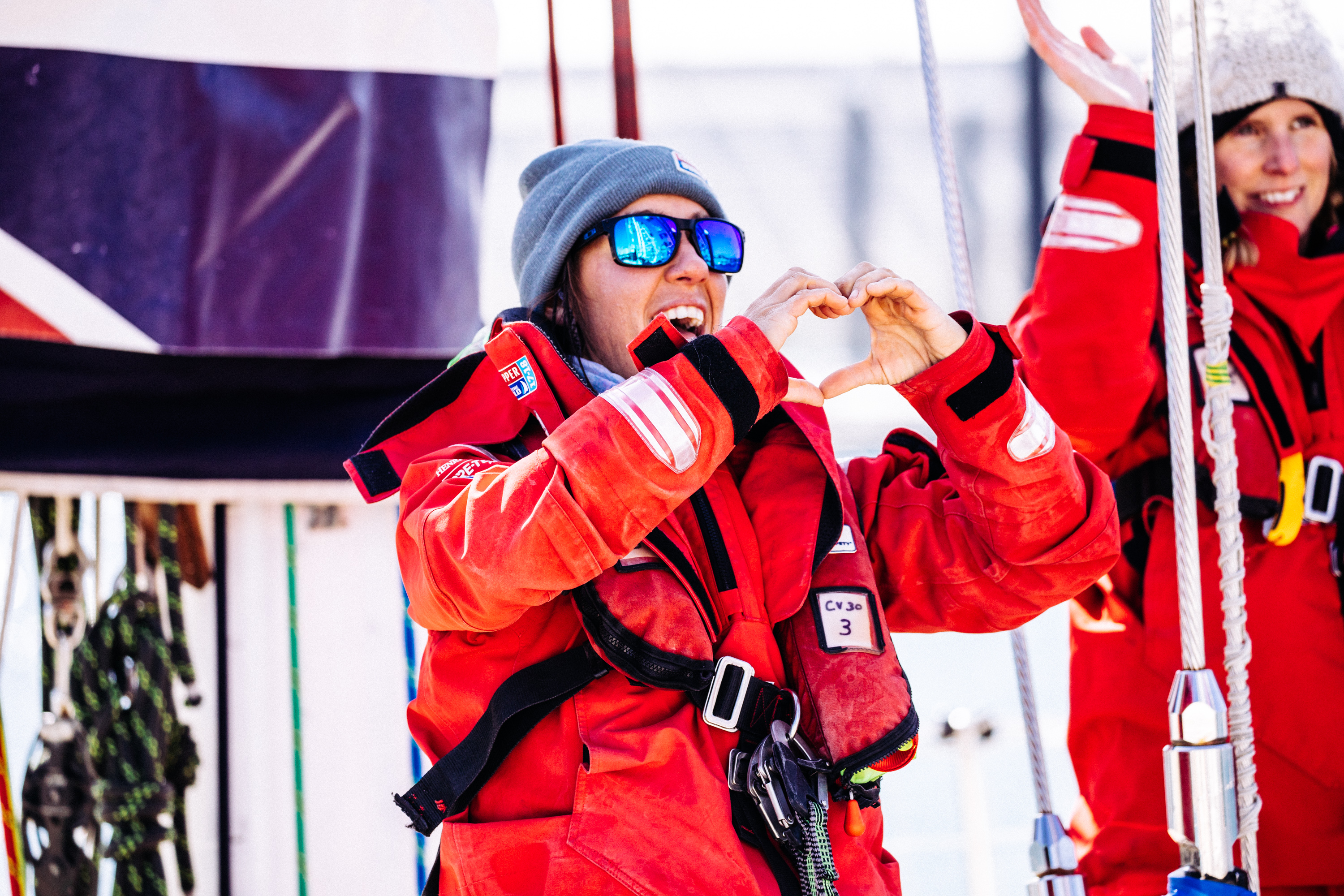 IMAGE: GREAT Britain's Luise Birgelen is happy to be in Qingdao

Round the World Crew Member Ray Gibson, a 64-year-old Builder from Queensland, Australia, commented: “It was tough at times. It was probably a tougher race than some of the others so far, mostly because there was so many fishing fleets, lots of fishing nets but it was good and very different from other races.”

Tessa Hicks, a British retired GP, also circumnavigating on board GREAT Britain, added: “The fishing fleets were just amazing! Like nothing I’ve ever seen. The fleets stretched for miles and miles as far as you can see. It was really surreal, and such an experience.”

Further down the fleet, the racing was just as intense. Dare To Lead, Unicef and HotelPlanner.com began a battle of cat and mouse after reaching Taiwan, which continued right up until the finish line.

Finishing just ahead of its nearest competition, Dare To Lead was the ninth team to take to the welcome stage at Wanda Yacht Club for the processions, speeches and presentations. The team had a strong start to Race 8 and, like the rest of the fleet, found it a particularly challenging race not only due to the conditions but also due to the volume of fishing fleets. 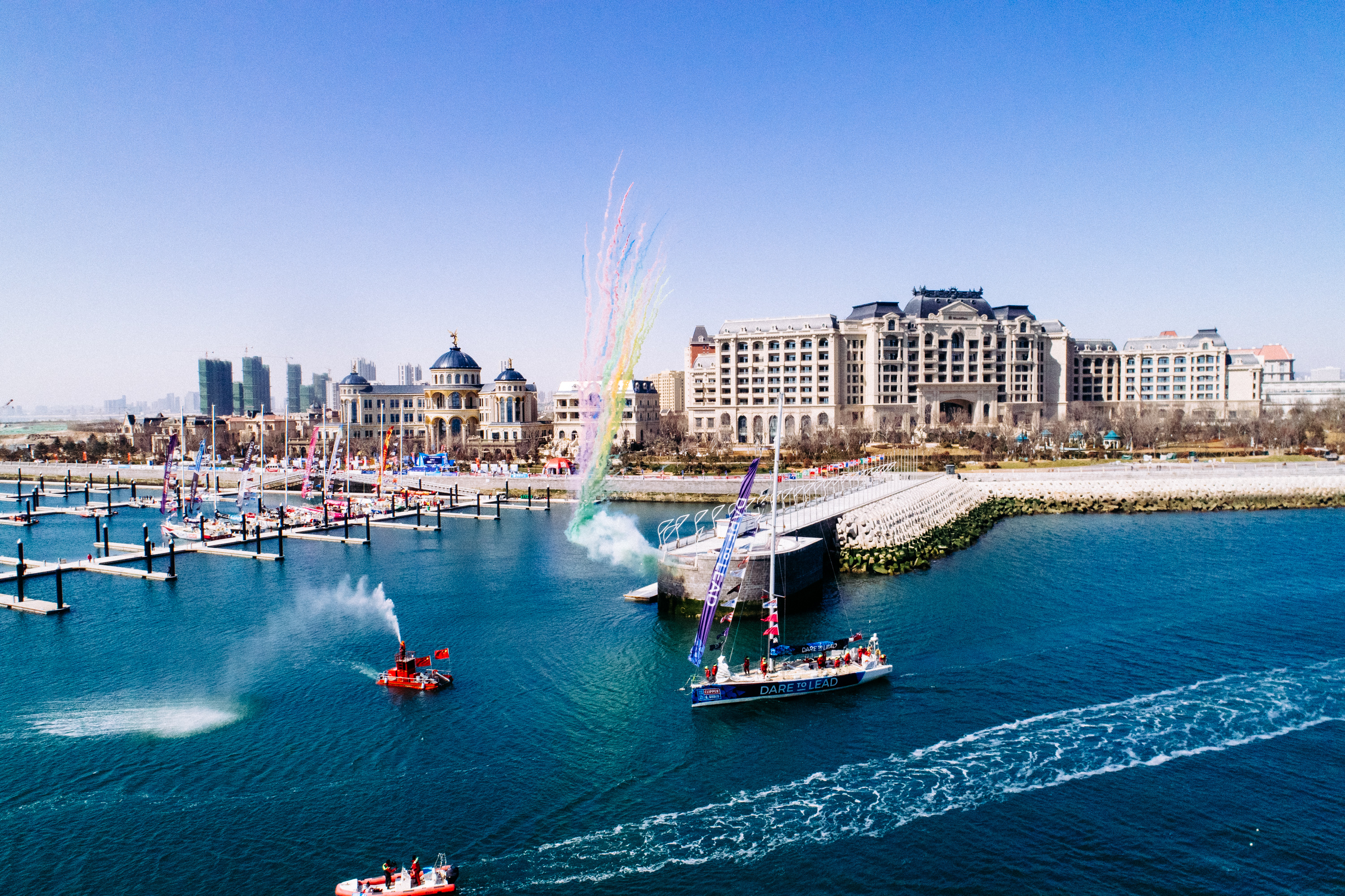 Speaking about the conditions on arrival into Qingdao, Shona Davies, Leg 3, 4 and 5 crew member said: “The race was amazing, I absolutely loved it but I have very mixed emotions coming into Qingdao as it marks the end of my Clipper Race experience which I have absolutely loved every minute of. I will be so sad to have to leave!”

However, the Dare To Lead team spirit shone through during the Elliot Brown Ocean Sprint where it placed third, earning a bonus race point, bringing its total for Race 8 to five points.

For Unicef, which took tenth place, it was a game of snakes and ladders from the start of the race, frequently passing competitors GREAT Britain, Dare To Lead and HotelPlanner.com in a battle for leaderboard positions. 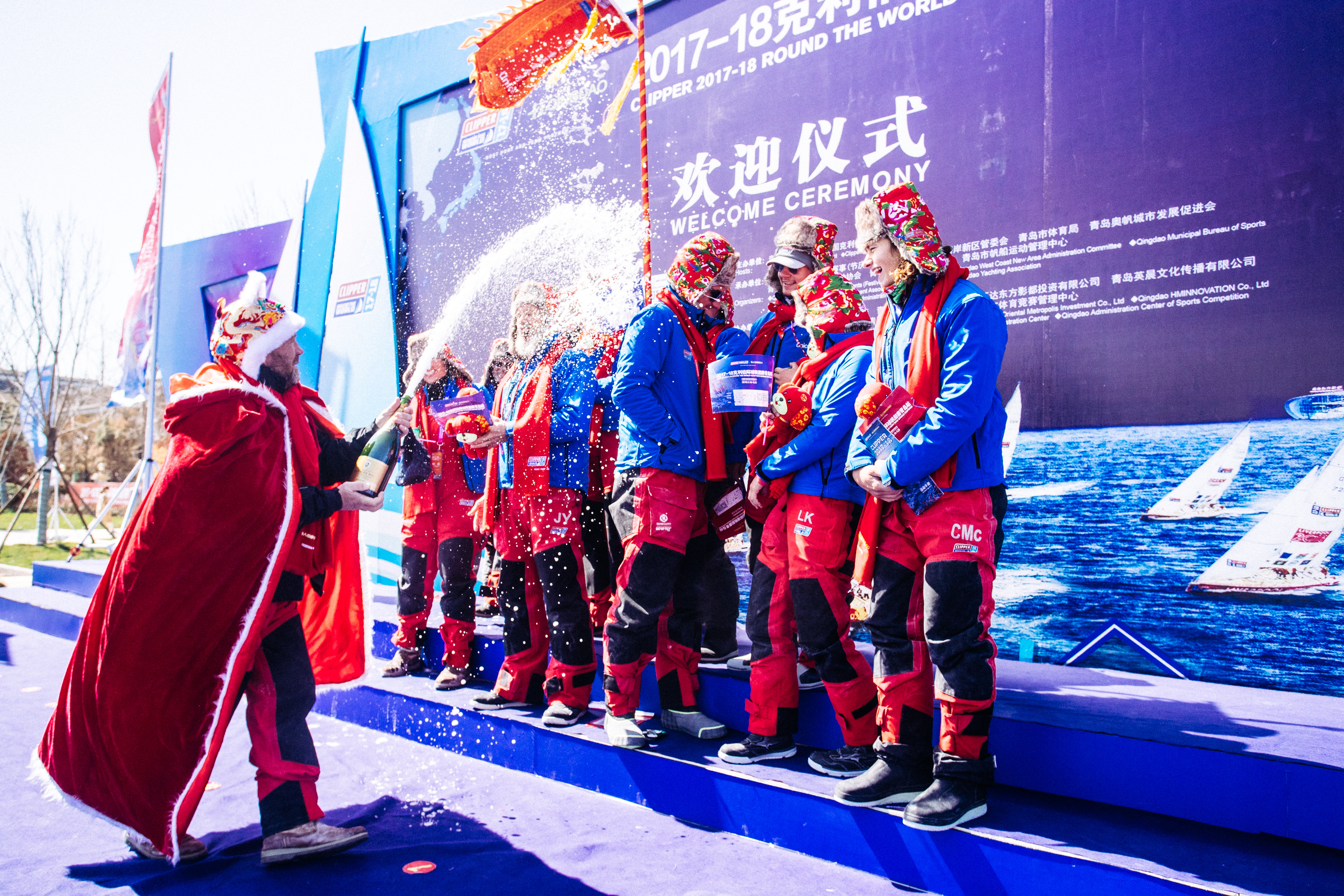 Two of the Clipper Race’s youngest Crew Members have been on board Unicef for Leg 5 and upon arrival, 18-year-old students Tom Dixon and Cam McCracken. Cam, from West Sussex, said: “It was a good race, I was really excited for the prevailing upwind conditions. We had some downwind conditions which was unexpected but it was a fun race.”

The last surprise of the day, however, came from the team of eleventh placed HotelPlanner.com. Crew member Tom Parker from New York, USA, received one of the the loudest cheers of the day from the locals when he put his impressive Chinese language skills on show to make a speech along with his Skipper Conall Morrison. 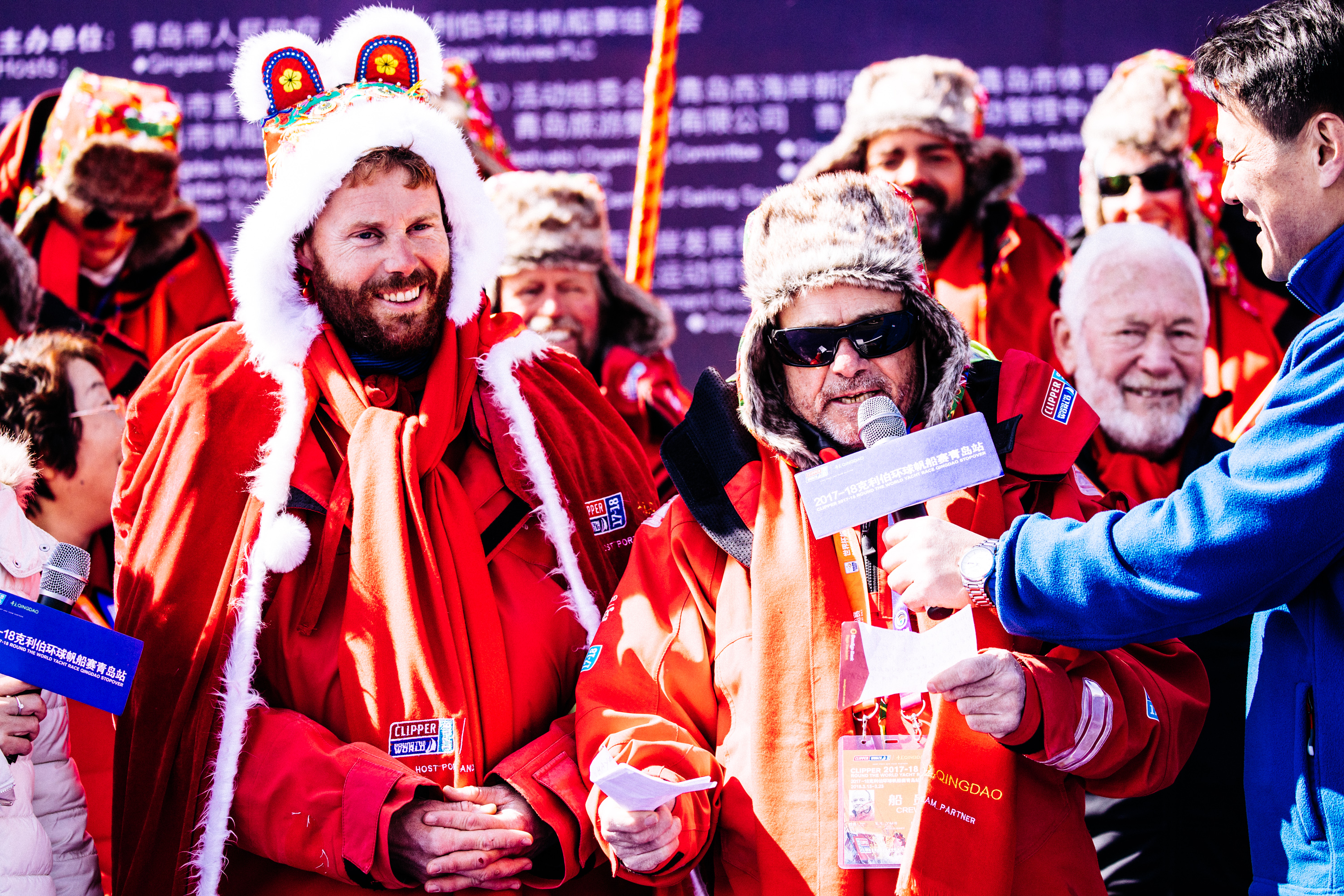 IMAGE: Tom Parker from HotelPlanner.com delivers a speech in Chinese

In yet another consistently high performing race, the team finished just 31 hours after the Race 8: Sailing City Qingdao Cup winners, Visit Seattle, and had its nearest competition, Unicef, in sight on the horizon just two days out from the finish. Watch Leader and Circumnavigator Roseann McGlinchey, 24-year-old Marketing Officer from Northern Ireland, said: “It was a real race of mixed conditions. We had extreme heat, extreme cold, lots of wind then no wind, upwind conditions then downwind conditions, just everything. It was brilliant!”

Having experienced the highly anticipated Qingdao welcome first hand, the entire Clipper Race crews were treated to fresh food and drinks inside the grand Wanda Yacht Club building. With the Qingdao stopover now underway, the host of events will kick off with an arrival press conference and Prize Giving ceremony on Friday evening.

The Clipper Race teams will remain in Qingdao until Friday 23 March when they will set sail across the North Pacific Ocean to Seattle on the sixth Leg of this challenge of a lifetime.

To find out more about the Qingdao stopover, head to the Host Port Page on the Clipper Race Website.

Visit Seattle has pulled off a sensational victory after a dramatic twist in the tale of Race 8,…

It has been a short but tough race from Sanya to Qingdao, which ended in a dramatic finale for the podium positions for Race 8: The Sailing City Qingdao Cup. Six of the eleven Clipper Race teams have now crossed the finish line off the…