Visit Seattle has pulled off a sensational victory after a dramatic twist in the tale of Race 8, swooping past PSP Logistics to steal victory in the final few miles of the race to Qingdao, China The Clipper Race competitors have once again proved that the race is never over until that finish line is crossed as anything is possible. PSP Logistics, which had led for eight successive days and were 25 nautical miles (nm) ahead at 0900 UTC, succumbed to a wind hole just 30nm from the finish line, allowing Visit Seattle to sneak up on their eastern side to take the race win. After her team crossed the finish line, Nikki said: "This reflects the hard work and determination and grit displayed by everyone on this boat - naturally a lot of luck and whilst we do feel for PSP Logistics, we can’t hide our elation."

This is the third podium in eight races and a second victory for Visit Seattle, who went into Race 8 in third place in the overall standings, just four points behind the race leader. The team is also yet to play its Joker Card, a bonus tactic, which each team has the ability to ‘play’ for one of the thirteen race stages, which doubles the number of race points earned for that chosen race. Commenting from on board the boat shortly after finishing, crew member Chrissie Laming, is a photographer who joined the Visit Seattle team for Leg 5 and 6. She says: “I am in total shock and am completely blown away at managing to come in at first position - we were keeping everything crossed for second place and had been driving hard through a tough 10 days. It had always been my dream to come into Qingdao as a winner - and it’s just come true - what a lucky lady I am, and team we are!”

Ralph Morton, Executive Director of the Seattle Sports Commission said: “The Visit Seattle team is picking up speed, as they head into Qingdao, preparing for the trip to their home port.

“We can’t wait to welcome them into Seattle and the Pacific Northwest, but first, congrats to the crew on a great race from Sanya to Qingdao, sailing fast and with style, as always.”

Just over an hour later, there was further agony for PSP Logistics, which was left bobbing around in no wind less than five nautical miles from the finish line, as two further teams overtook in the east.

Sanya Serenity Coast took second place after crossing the line at 01:12:58 local time (17:12:58 UTC). The team. After crossing the finish line Skipper Wendy Tuck, from Australia, said: “I didn’t know that we had got second till about 90 minutes, after we had finished. I really feel PSP Logistics’ pains as we have been there after losing from a 200 nm lead in Race 3.” Sanya Serenity Coast’s fourth podium position of the 13 stage Clipper Race series, this is an especially big result as the team had chosen to play its Joker Card in this particular race which means its eleven points are doubled, extending its lead over the ten competing teams in the race. The team also won two points in the Elliot Brown Ocean Sprint part of the race.

Adding, Wendy said: “It certainly makes playing our Joker Card worth it, plus with the whammy of the two bonus points from the Elliot Brown Ocean Sprint we are happy, but won’t be celebrating as hard.”

Then Liverpool 2018 crossed the finish line in third place at 1825 UTC (0225 local) to take the team's second podium position. Skipper Lance Shepherd says: "It has been a very tactical race with every weather you could imagine - except snow.....but that might come yet. "The racing has been very close and we have been playing cat and mouse with Sanya Serenity Coast and Visit Seattle. It's always exciting when one gybe or tack can make all the difference. It is also fantastic to get our second podium, with a third place. The crew have performed amazingly and they should be very proud of themselves having achieved something special. Really looking forward to a cold beer and a warm bed. Bring on the mighty Pacific." PSP Logistics ended up finishing Race 8 in fourth place, crossing the finish line at 2343 UTC on 14/03 (0743 on 14/03 local). Taking to the stage at the team's arrival ceremony, Skipper Matt, who was clearly disappointed, explained: "It was a very difficult race. We were leading from the start but in the last five miles the wind just died on us and we watched our competitors sail around us. That last five miles took us twelve hours to complete." However, Matt added: "It might have been a tough experience but we're still very proud of ourselves, we had such a good race together until that last part and the welcome here has been absolutely fantastic as always so thank you for making us feel so welcome."

The Qingdao team was given a rapturous welcome to its home port. Crossing the finish line 10:40:42 local time (02:40:42 UTC) in fifth place after its 1hr 55mins redress time had been applied. Read more about the home team's welcome here. (Image of the Qingdao team)

The Garmin team was the final Clipper Race team of the day to enter the marina. Crossing the finish line at 1338 local time(0538 UTC), the team secured sixth place, as well as picking up three points in the Elliot Brown Ocean Sprint. 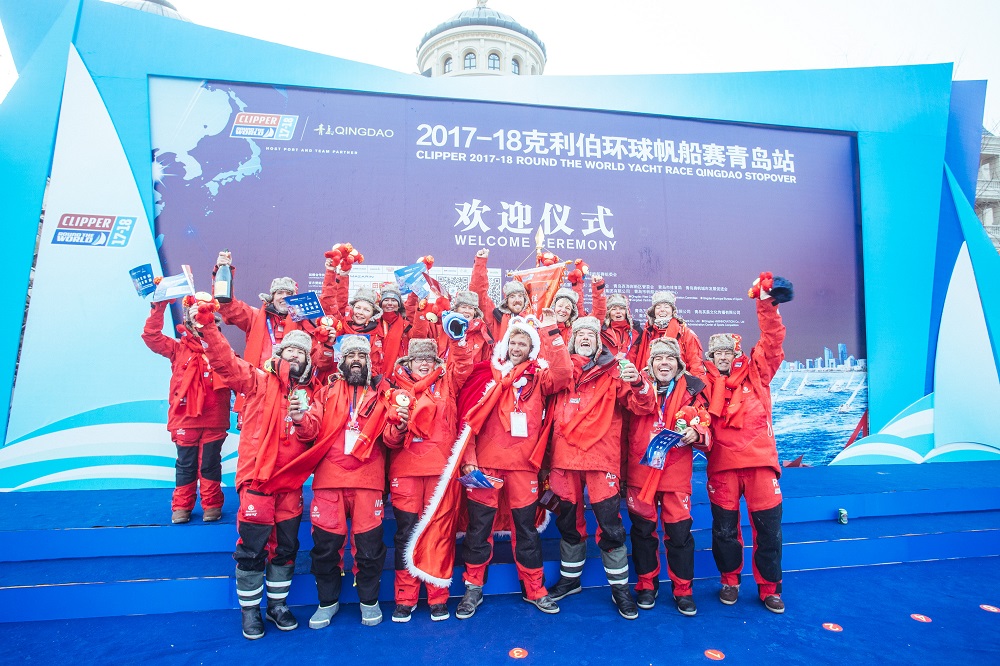 (Image of the Garmin team)

Arriving back to land, round the world crew member Nell Wyatt said: "It was wonderful. Very odd going from 35 degrees to now which is freezing. Also we went from being completely stationary with absolutely no wind, to about 45 knots of wind about an hour ago.

"It's been brilliant. Very hot, very cold, very exciting and just really good. Plus it was brilliant to get the Ocean Sprint points. I was here four years ago as I joined the race here for the Pacific Leg so I know just how great a show they put on here and I can't wait to experience it all again."

The Clipper Race fleet are the first vessels to arrive at the newly constructed Wanda Yacht Club in the West Coast New Area of Qingdao, with the Skippers and crew being given a full taste of the famous Qingdao welcome at their arrival ceremonies. Follow our Clipper Race Live page on Facebook to see the action unfold.

The Clipper Race’s arrival to Qingdao marks the seventh time the Chinese city has been included as a Host Port on its global race route, making it the longest serving Host Port Partner of the race.

The full Clipper Race fleet is expected to have arrived by Friday 16 March and will remain in the city until Friday 23 March, when the eleven teams will embark on the Mighty Pacific Leg 6, a 5,600 nautical mile race across the North Pacific from Qingdao to Seattle.

The Clipper Race fleet has been steaming along under spinnaker in a flat sea state towards the finish line of Race 8: The Sailing City Qingdao Cup and it looks like PSP Logistics could secure its second consecutive victory today, barring any twist…

For most Clipper Race crew, the upcoming Stopover will be their first time in Qingdao. But many will arrive knowing…