Visit Seattle continues to lead the Clipper Race, maintaining clear water in front of Sanya Serenity Coast, in second, and Unicef in third. Now, just off the coast of Rio de Janeiro, the leaders are on the cusp of being able to re-hoist their spinnakers for the last 1500nM to Punta del Este.

After days of beating upwind around the edge of the South Atlantic High, many of the teams have finally experienced a favourable change in wind angle. The reduction in the heel of the boat is not only more comfortable but means the potential for greater boat speeds. Bob Beggs, Unicef Skipper, said: “The last 24hrs has been full of anticipation, the wind has gradually backed and we are sailing more upright. The spinnaker sheets are run the kite is on deck and team Unicef are like coiled springs waiting for the magic angles to appear but they are tantalisingly just over the visual horizon at present.”

On Sanya Serenity Coast the Skipper, Wendy Tuck, reports: “We are now just waiting and waiting for the wind to turn, all eyes are on the Windex at the top of the mast. Visit Seattle is our target, but she is fast and being sailed really well. Bob on Unicef is chasing and I know he will be pushing hard, so there is no relaxing here.”

Fourth placed HotelPlanner.com is remaining focused with Qingdao, PSP Logistics and GREAT Britain chasing its stern. Skipper, Conall Morrison, said: “We remain in 4th place with three boats not far behind us. We must keep our game up and can't afford any more tactical mistakes.” 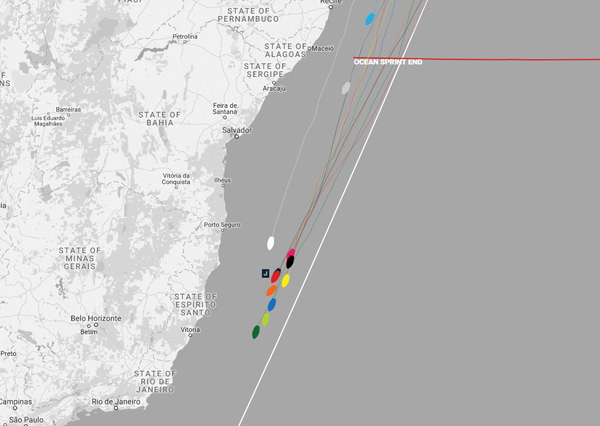 The competition between Qingdao, back to fifth, PSP Logistics, currently sixth and GREAT Britain, currently seventh, has been heating up during the past few days of racing. PSP Logistics Skipper, Roy Taylor, reports: “Not only are we locked in battle with the 'Dragon Boat' Qingdao but also with GREAT Britain, who we can see visually on the horizon to leeward. We have not seen either vessel since nightfall on the 20 August (25 days ago) and now we are sharing the same small patch of water on the globe after sailing over 4000nM.” Roy adds: “We are still on a lean on a fine reach and it looks like all boats are heading towards the same waypoint, so it should be an exciting end to a great first leg.”

Garmin, eighth, is currently holding its position over Liverpool 2018, in ninth, and is maintaining the intensity after a challenging night of shifting wind. Skipper, Gaëtan Thomas, said: “Changing headsails, constant trimming, and making sure that we are on course. All that with Liverpool 2018 the ‘Pink Panther’ now hunting us and us hunting the next targets.”

IMAGE: 'Life on the foredeck' Liverpool 2018 preparing for a headsail change

It was another fast day of sailing for Dare To Lead, currently tenth, and holding it’s more westerly course, the team has seen the sea state gradually improve and the wind move ever so slightly back. Skipper, Dale Smyth, said: “The next couple of days should see us passing Rio de Janeiro and entering a slightly complex ridge of High Pressure before our final run in to Punta del Este. Bring on the spinnakers.”

For Greenings and Nasdaq, in eleventh and twelfth respectively, the Elliot Brown Ocean Sprint has been tough. With squalls plaguing their progress, and a lumpy confused sea state, both skippers are reticent about their speed. Dan Smith, Greenings Relief Skipper and Deputy Race Director, said: “The wind improved for the second half of our sprint but unfortunately with a few hours left it became squally and changeable dropping our average speed right down. Our average speed ended up being 10.5 knots which I suspect isn't quick enough to win the sprint.”

Results of the Elliot Brown Ocean Sprint will be announced once all teams have recorded an elapsed time. Points will be awarded to the three boats who recorded the fastest time between 5°S and 10°S.

Though the wind is finally backing Simon Rowell, Clipper Race Meteorologist, reports that: “it won’t back particularly smoothly”. Results will be variable wind speeds as the fleet crosses from the north side of the ridge to the South. However, the front to the south is being pushed further south by the South Atlantic High, so the fleet should experience more spinnaker time than normal during the final stretch to Punta del Este.

After thousands of nautical miles sailed across the Atlantic Ocean, Visit Seattle, Sanya Serenity Coast and Unicef again hold first, second, and third position on the leader board. For some, the finish is almost in sight, and for others,…